Submitted Successfully!
Thank you for your contribution! You can also upload a video entry related to this topic through the link below:
https://encyclopedia.pub/user/video_add?id=15899
Check Note
2000/2000
Signaling Pathways Involving Epigallocatechin Gallate
Edit
Upload a video
This entry is adapted from 10.3390/molecules25030467

Epigallocatechin gallate (EGCG) is the main bioactive component of catechins predominantly present in various types of tea. EGCG is well known for a wide spectrum of biological activities as an anti-oxidative, anti-inflammatory, and anti-tumor agent. The effect of EGCG on cell death mechanisms via the induction of apoptosis, necrosis, and autophagy has been documented.

Tea has been known to be the world most renowned non-alcoholic beverage since ancient times and it is currently being utilized by two-thirds population of the world, owing to its taste, stimulating effects, unique aroma, and associated health perspectives [1][2]. Various types of tea like green, black and oolong tea are derived from the Camellia sinensis (L.) plant containing variety of components among which polyphenols are most significant ones. Basic differences among all of these teas depends upon the stage of fermentation processes from which they are produced. Purposely, green tea is not fermented while black tea and oolong tea are completely and partially fermented, respectively. Amongst all of the investigated teas around the globe, green tea is well studied, owing to its health promoting benefits. In general, tea based phenolics possess protective action against numerous metabolic syndromes.
Several nutraceutical aspects of green tea extracts depends upon the concentration of phenolics and their associated derivatives. The major biologically active moiety present in leaves of green tea are classified as catechins that nearly account for 25–35% on dry weight basis. This catechin group comprises eight phenolic flavonoid constituents, specifically, catechin, epicatechin, gallocatechin, epigallocatechin, catechin gallate, epicatechin gallate, gallocatechin gallate, and epigallocatechin gallate (EGCG) [3][4]. Among above mentioned polyphenols, EGCG is the most vital tea based catechin which is considered to be the main reason for bioactivity of green tea [5][6][7][8].
Catechins are plant secondary metabolites [9][10]. They possess numerous functions in plant survival, growth, and metabolism, but they can also interact with other living organisms if ingested or came into direct contact. Catechins or flavanols probably constitute the most abundant subclass of flavonoids and they are essentially represented by (–)-epigallocatechin-3-gallate (EGCG), (–)-epigallocatechin (EGC), (–)-epicatechin-3-gallate (ECG), and (–)-epicatechin (EC) [11]. These last four bioactive compounds are found in large amount in green tea (leaves of Camellia sinensis) and cocoa/chocolate, but they are also present in many fruits or seeds, such apples, blueberries (Vaccinium myrtillus) and grapes (red wine and beer) and peanuts [12]. This review focuses on catechins that are derived from green tea and in particular on EGCG, which represents 50% to 80% of all Camellia sinensis catechins (200–300 mg/brewed cup of green tea) [13]. Moreover, we analyzed preclinical works examining its pharmacological and biomolecular mechanism of action.
Epigallocatechin gallate is the most bioactive catechin that is predominantly present in tea. Among all of the tea types, it is found at maximum comncentration in green tea leaves. EGCG molecule (Figure 1) comprises two aromatic structures that are co-joined by three carbon bridge structure (C6-C3-C6) along with hydroxyl group (OH) at simultaneous carbons i.e., 3’, 4’, 5’ of ring-B. Carbon-3 of ring-C is esterified with a gallate molecule (features of catechins originated from tea are responsible for bioactivity due to position and number of OH-group on the rings. They regulate their capability to interact with biological matter via hydrogen bonding, a hydrogen and electron transferring process contained by their antioxidative potentials. The presence and absence of a galloyl molecule differentiates EGCG from remaining three catechins [14]. 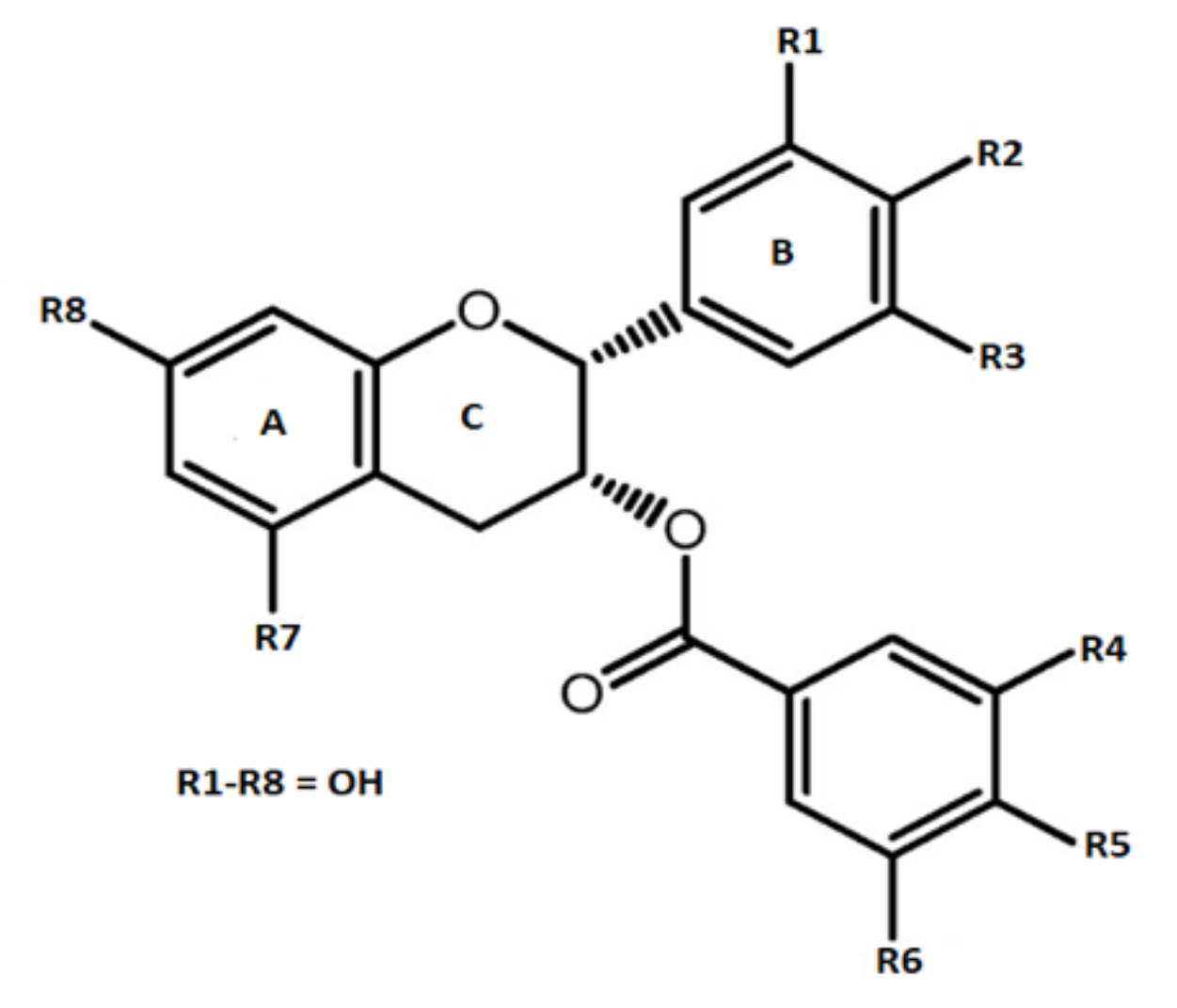 Figure 1. Chemical structure of epigallocatechin gallate.
Pure epigallocatechin gallate is classified as an odourless crystal and/or powder available in white, pink, or cream colour. It is considered to be soluble in water as a colorless and clear solution (5 mg mL−1). It is also soluble in methanol, tetrahydrofuran, acetone, pyridine, and ethanol. EGCG have a melting point at 218 °C [15].
Even though EGCG is found to be the most predominant and bioactive constituent present in tea, it is considered to be poorly stable in aqueous solutions and poorly soluble in oils and fats [16][17][18][19]. This poor stability and solubility restricts its direct addition in food products. Numerous delivery systems are, in practice, to preserve its structural integrity and shield EGCG from degradation [18][20][21][22][23][24]. Additionally, structural modification in EGCG has also aided in elevating its lipophilicity [25][26].
Numerous physical aspects like pH, light, oxidants contents, oxygen, temperature, and concentration of EGCG, influence the stability of epigallocatechin gallate [17][26][27][28][29]. Epimerization and auto-oxidation are two most important reactions that result in instability of EGCG and loss of its health promoting properties [30]. EGCG is oxidized at low concentration and temperature i.e., 20 to 100 μM & < 44 °C, respectively. On the other hand, it is epimerized to gallocatechin gallate at elevated temperature (greater than 44 °C) and acidic conditions (pH 2 to 5.5) [30][31][32][33]. EGCG at a concentration of 300 mg per litre has been found to be stable at 25 °C (24 h) in a pH range of 3 to 6, nonetheless if kept at 4 °C & 25 °C for 24 h (pH 7), a loss of 25 & 83%, respectively, was observed [29].
EGCG is an abundant source of phenolic OH-groups that leads to its health escalating properties. Various scientific studies (in vivo and in vitro) have been carried out to authenticate the potential of EGCG as an anti-oxidative, antiinflammatory, and anti-cancerous agent [34][35].
Wei and co-authors have reported that EGCG exerts an anti-tumor effect through the inhibition of key enzymes that participate in the glycolytic pathway and the suppression of glucose metabolism [36]. Shang and coworkers proposed that tea catechins in combination with anticancer drugs are being evaluated as a new cancer treatment strategy [37]. It has a potential role as adjuvant in cancer therapy and it could enhance the effect of conventional cancer therapies through additive or synergistic effects, as well as through the amelioration of deleterious side effects [38]. EGCG interacts with catalase and highlighted as an anticancer drug [39]. Green tea polyphenols are reported as a translational perspective of chemoprevention and treatment for cancer with concrete influence on signaling pathways [2]. EGCG as a powerful antioxidant, antiangiogenic, and antitumor agent, and as a modulator of tumor cell has the potential to impact in variety of human diseases [40].

2. Occurrence of Epigallocatechin-3-Gallate in Different Foods

The close relationship between food and disease is well known [41], thus EGCG consumed in food could be a natural potential source of health benefits, even in complex and intricated disorder as cancer.
Principal catechin in tea is EGCG, which is also known to be responsible for various health modulating perspectives tht are related to utilization of tea. According to Wu et al., (2012), a cup of green tea prepared by adding 2500 mg leaves in 0.2 L of water contains 90 mg of EGCG [42]. The content of EGCG in black tea is less when compared to green tea, mainly due to polymerization of catechins [43]. EGCG that are derived from tea possess various bioactive properties and, therefore, have attained attention as potent functional and nutraceutical ingredient in food and pharmaceutical industry. Table 1 lists EGCG contents in some selected foods.
Table 1. Occurrence of epigallocatechin-3-gallate in different food.

A plethora of biomolecular mechanisms has been demonstrated and proposed to be involved in the use of this catechin in preclinical models. These can include, but are not limited to, the induction of apoptosis, cell cycle change, antioxidant activity, modulation of drug metabolism enzymes, etc. EGCG possesses multiple pharmacological activities, depending on cancer cell type, thus reflecting different protein expression and epigenetic mechanisms. Every cell model can express and modulate at convenience its genetic background, and this is at the basis of the diverse biomolecular targets triggered by EGCG. More consistently, EGCG has been analyzed in different tumor cell lines and less frequently in animal models: this paragraph investigates the association of EGCG with proliferation, differentiation, apoptosis, inflammation, angiogenesis, and metastasis, i.e., the main signaling pathways and processes of living cells (Figure 2). 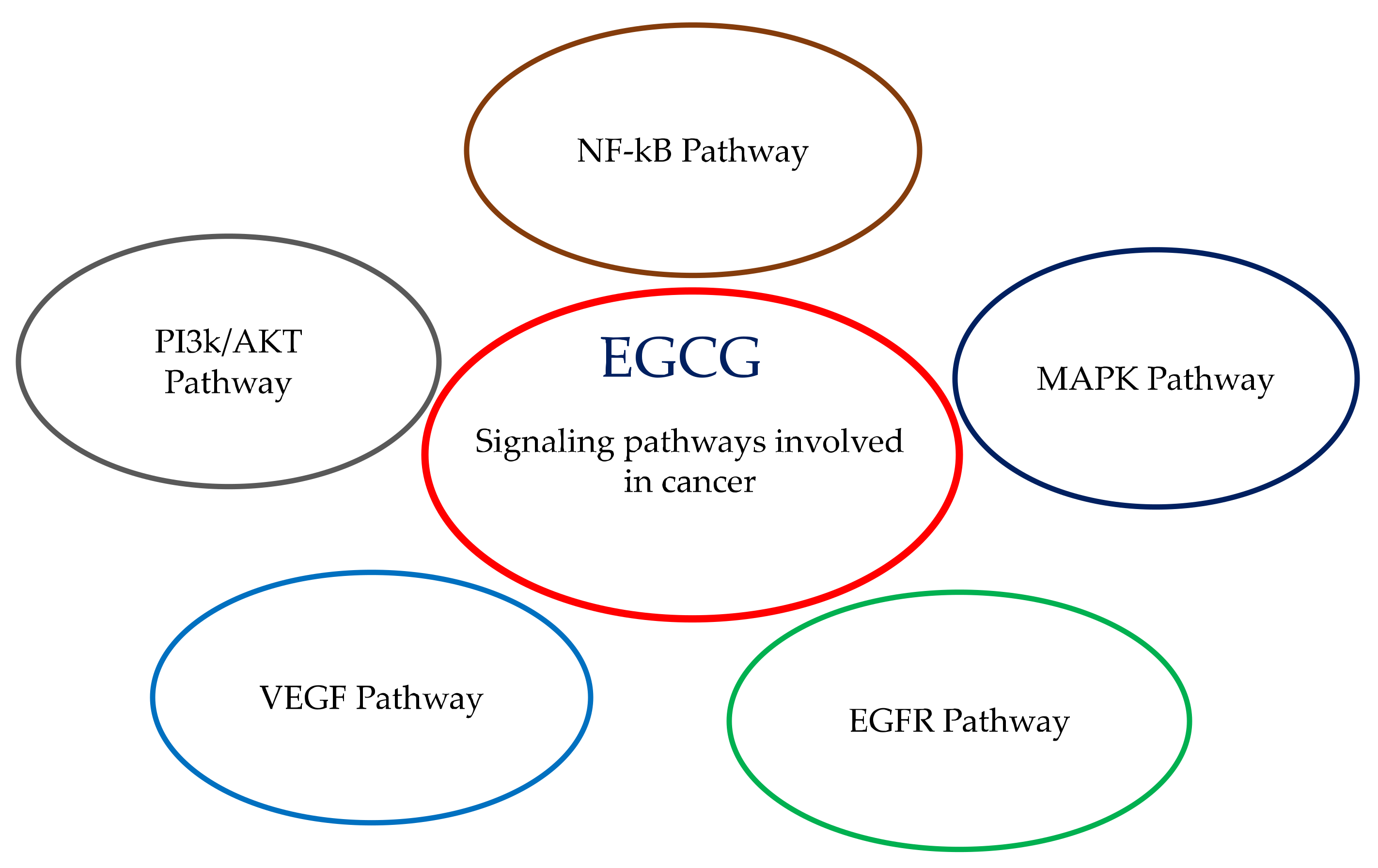