Submitted Successfully!
Thank you for your contribution! You can also upload a video entry related to this topic through the link below:
https://encyclopedia.pub/user/video_add?id=15886
Check Note
2000/2000
Tocilizumab in COVID-19
Edit
Upload a video
This entry is adapted from 10.3390/jcm10214935

Tocilizumab (TCZ) is a humanized monoclonal antibody that, via the binding to soluble and membrane interleukin (IL)-6 receptors, produces inhibition of the proinflammatory signals. It is commonly used in several types of inflammatory arthritis, in Castleman’s syndrome, and in cytokine release syndrome secondary to chimeric antigen receptor T cell therapies. Given its ability to intercept proinflammatory cascades, TCZ is potentially useful in all clinical conditions produced by the dysregulation of inflammatory processes, especially when refractory to other approved treatments.

Tocilizumab (TCZ) is a humanized monoclonal antibody that, via the binding to soluble and membrane interleukin (IL)-6 receptors, produces inhibition of the proinflammatory signals [1]. It is commonly used in several types of inflammatory arthritis, in Castleman’s syndrome, and in cytokine release syndrome secondary to chimeric antigen receptor T cell therapies [2]. Given its ability to intercept proinflammatory cascades, TCZ is potentially useful in all clinical conditions produced by the dysregulation of inflammatory processes, especially when refractory to other approved treatments [3].

Although the precise pathogenesis of the coronavirus disease 2019 (COVID-19) pneumonia remains unsolved, evidence showed that within a complex cytokine storm scenario, SARS-CoV-2 provokes a dramatic increase in IL-6 levels [4]. Based on this evidence, it was suggested to use TCZ for improving the patients’ outcomes in COVID-19 pneumonia [5]. Consequently, many clinical studies have been conducted to evaluate the efficacy of this treatment, and an increasing number of evidence-based medicine analyses can be found in the literature [6].

However, initial evidence syntheses failed to produce definitive results, especially owing to the conflicting findings emerging between observational studies and randomized clinical trials (RCTs) [7]. As matter of fact, in evaluating the effectiveness of drugs for the treatment of COVID-19, even in high-impact journals, the following methodological distortions were common among observational studies, particularly dealing with time-to-event analysis: immortal time bias, confounding bias, and competing risk bias [8].

Despite the rush for a game-changing treatment capable of significantly impacting the prognosis of COVID-19 patients, clinical practice must rely upon rock-solid evidence, and well-known RCTs are placed on the top of the hierarchy of evidence [9]. This is the rationale behind the choice to perform a systematic review and meta-analysis only focused on RCTs, involving the comparison of TCZ with placebo or standard of care (SoC), for the treatment of COVID-19.

After de-duplication from an initial total of 2885 records, the titles and abstracts of 1589 studies were screened. Overall, 11 studies were considered eligible for full-text review, and nine met the inclusion criteria [10][11][12][13][14][15][16][17][18]. Figure 1 depicts the entire process of study identification, inclusion, and exclusion. Details of the included studies are available in Table 1 . Overall, nine trials were included, enrolling 3358 patients in the TCZ group and 3131 subjects in the comparator group. Studies were conducted from March 2020 to early 2021 across several countries worldwide; all trials were multicenter. The enrolled patients suffered from moderate to critical disease, according to the definitions provided by the United States National Institutes of Health (NIH), as far as the clinical spectrum of SARS-CoV-2 infection is concerned [19]. Mortality was not always the primary endpoint but was assessed in all trials at 28 or 30 days except in one study, where researchers investigated in-hospital mortality [11]. Tocilizumab dosing was quite variable, ranging from 6 to 8 mg/kg, administered as a single dose or repeated short term. 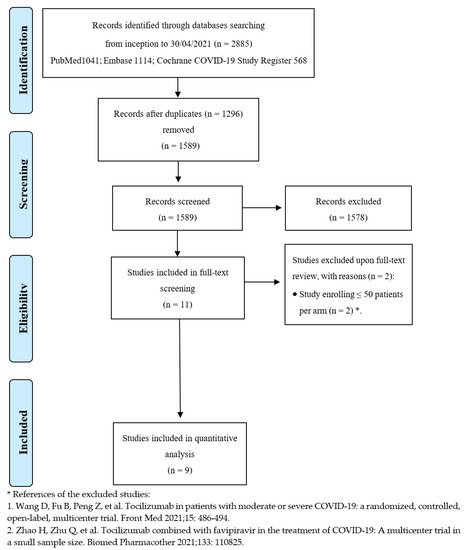 Figure 1. PRISMA diagram: results of the literature search and flow diagram for the selection of eligible studies.
Table 1. Characteristics of included studies (only randomized controlled trials).

Pre-planned key subgroup analyses were carried out to explore how the treatment effect varied across different subsets of studies or patients. When contrasting open label with placebo-controlled trials ( Figure 2 ), the beneficial effect of TCZ on mortality was confirmed in the subgroup that included the first type of studies (OR: 0.82; 95% CI: 0.72–0.92; I 2: 36%; fixed-effect model), but the benefit disappeared in the other subgroup (OR: 1.12; 95% CI: 0.75–1.66; I 2: 0%; the results were the same according to fixed- and random-effect models), although not statistically significant. The results obtained when testing for subgroup difference were also not significant, so no interaction existed between the subtotal estimates for the subgroups.

The results of quality assessment are depicted in Figure S2 : the major issues were related to open label studies [10][11][14][16][17][18] due to the lack of blinding. The results of stratifying studies according to this criterion (open label versus placebo-controlled) were already shown in Figure 2 . The funnel plots of the primary outcomes of the studies are presented, along with the results of Egger’s regression test ( p = 0.1441), which suggest an absence of publication bias and small-study effects. 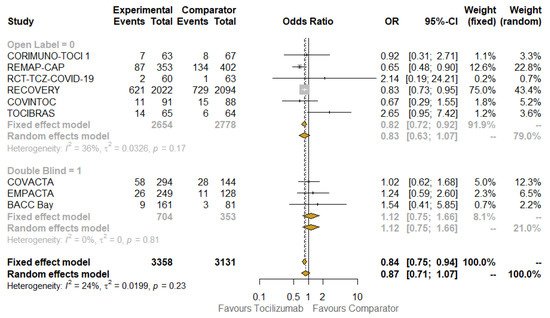 It was performed using the leave-one-out method and shows that the estimated pooled ORs, obtained excluding one study at time, are still consistent, even when omitting the study with the highest weight according to both the fixed-effect (75%) and random-effect 43.4%) models [16] (OR: 0.86; 95% CI: 0.68–1.07). This held true even when omitting the study that was apparently the major driver of heterogeneity, the TOCIBRAS study [18]: when it was excluded, the I 2 dropped to 0% and the OR for mortality associated with TCZ use was 0.82 (95% CI: 0.74–0.92).

The results of our systematic review and meta-analyses are in line with the most recent development of the recommendations for COVID-19 treatment, which now include TCZ as an important option for patients with the severe or critical disease [20]. These data need to be put into context to understand how TCZ has become a potential life-saving agent in patients with SARS-CoV-2 infection.

Elevations in serum IL-6 levels in patients affected by severe COVID-19 have spurred a renewed interest in this cytokine as a therapeutic target in the broader context of the cytokine storm syndrome triggered by SARS-CoV-2 infection [5][21]. Despite the logistical difficulties, several studies have been conducted in a short time. Predictably, observational studies in particular suffered from relevant methodological limitations that threatened the validity of their conclusions [22]; moreover, they yielded inconsistent results when pooled with RCTs in evidence syntheses [23].

The full publication of the RECOVERY trial [16] and the accumulation of further evidence regarding TCZ and other IL-6 blockers led to a prospective meta-analysis (on 27 RCTs) of utmost importance in June 2021. It showed that the use of IL-6 antagonists was associated with improved survival in COVID-19 patients, but the results were statistically significant only for TCZ (OR for mortality equal to 0.83; 95% CI: 0.74–0.92) [24]. Coherently with what was observed in the RECOVERY study, the subgroup of patients who received also corticosteroids appeared to benefit the most: the mortality risk was even lower (OR: 0.77; 95% CI: 0.68–0.87) [20]. On this basis, the World Health Organization (WHO) issued a strong recommendation on July 6 to use IL-6 blockers, specifically in patients with severe/critical disease [19]. This recommendation was maintained by the NIH guidelines with a specific indication in favor of TCZ plus steroids [25], confirming the setting of patients with severe COVID-19, and was in line with the recommendation of REMAP-CAP [11] in addition to RECOVERY [16], and was consistent with definitions of progressive disease and marked pro-inflammatory status based on concentrations of C-reactive protein (CRP) being higher than 75 mg/L, a threshold established in the RECOVERY study [16].

TCZ is one of the very few agents that has so far been found to favorably change the prognosis of patients with severe COVID-19 [26]. Nonetheless, additional RCTs are still needed to confirm this finding, upheld, beyond any reasonable doubt, by a strong biological rationale and by the data collected from completed RCTs, and to define the best schedule, in light of the different dosages administered across studies. Observational studies may have a complementary role, being instrumental in identifying adverse events and complications such as secondary bacterial infections that may develop after the usual follow-up of RCTs. Moreover, avenues for future research may be constituted by individual patient data meta-analyses and umbrella reviews. The former would allow the investigation of the effectiveness of treatment at the level of relevant patient subgroups. Granular data would permit a more precise understanding of the profile of the patients who would potentially benefit the most from the drug, besides the CRP threshold that is quite generic. The latter would allow the findings from multiple systematic reviews and meta-analyses about the review question to be compared and contrasted, and thus, would make it possible to present a wide picture of the available evidence, highlighting its consistency or potential discrepancies, in an attempt to explore and detail the underlying reasons for contradictory results.

More
© Text is available under the terms and conditions of the Creative Commons Attribution (CC BY) license (http://creativecommons.org/licenses/by/4.0/)
Upload a video for this entry
Information
Subjects: Infectious Diseases
Contributor MDPI registered users' name will be linked to their SciProfiles pages. To register with us, please refer to https://encyclopedia.pub/register :
Alberto Maraolo
View Times: 48
Revisions: 2 times (View History)
Update Time: 11 Nov 2021
Table of Contents
1000/1000
Hot Most Recent