Submitted Successfully!
Thank you for your contribution! You can also upload a video entry related to this topic through the link below:
https://encyclopedia.pub/user/video_add?id=15879
Check Note
2000/2000
Microneedles in Drug Delivery
Edit
Upload a video
This entry is adapted from 10.3390/mi12111321

In recent years, an innovative transdermal delivery technology has attracted great interest for its ability to distribute therapeutics and cosmeceuticals for several applications, including vaccines, drugs, and biomolecules for skin-related problems. The advantages of microneedle patch technology have been extensively evaluated in the latest literature; hence, the academic publications in this area are rising exponentially.

The skin is designed to perform an extensive range of jobs, and its barrier properties keep the underlying organs safeguarded from external difficulties, including physical, chemical, and microbial stresses. Using the skin as the drug administration site is an attractive option for distributing therapeutics such as vaccines, drugs, biomolecules, and difficult-to-deliver small molecules. However, the hydrophobic and lipid-rich surface layer of the skin limits the bioavailability of therapeutics. Among the available transdermal drug delivery (TDD) methods, the microneedle-mediated delivery system, which is defined as the non-invasive delivery of medications through the skin surface, has attracted interest from many research institutes and companies. The defensive, inflammatory and immunological properties of the skin make the microneedle (MN) delivery system an attractive alternative drug delivery system to address the limitations associated with conventional methods [1]. The MN delivery system, which consists of an array of submillimetre-sized needles (up to 1500 μm in length) attached to a base support, has been shown to be able to penetrate into the viable epidermis of the skin, bypassing the stratum corneum (SC), the outermost layer of the skin. In this way, the delivery of pharmaceutical ingredients becomes possible in a pain-free manner, as the MN delivery system avoids interfering with the dermal layer, which is where all nerve fibres and blood vessels are mainly located. The system has been proven as a valuable technique in delivering drug molecules with higher masses (over 500 Da) and various polarities. The therapeutic ingredients include small molecules; biomacromolecules (proteins, hormones, peptides); vaccines for SARS, MERS, and COVID-19; and genes [2]. In fact, an example of an MN-based system has progressed into phase III clinical trials (www.clinicaltrials.gov, accessed on 1 August 2021).
Although microneedle technology was originally conceptualised and patented in the 1950s [3], it took some time for the benefits of microneedles to be widely recognised. It was not until 1998 that a report was released that looked at the potential use of microneedles for vaccines [4]. Since then, the number of investigational studies on MNs has grown considerably; over 4000 patents and research articles have been presented, with the number of these still rising exponentially. In particular, there has been considerable progress in recent decades, including advances in strategies of microneedle fabrication and the assessment of MNs in clinical applications to satisfy the complex requirements in actual use. Some of the pioneering and key developments in MN research have been summarised in Figure 1. Recently, MN patches have gained rapid momentum in the cosmetic field for skin moisturizing or anti-ageing applications. Most commercialised MN patches are composed of hyaluronic acid (HA), which dissolves into the skin after administration. MNs made of HA can moisturise skin tissue and deliver actives for skin improvement via their dissolution [5][6].
The shortcomings associated with the MN system, however, should be addressed in the early stages of product development [7]. To evaluate the future direction of the field, significant developments in microneedle-based research have been highlighted, accompanied by constraints that could potentially hamper the full exploitation of the system. In this short review, special emphasis is laid on these limitations, which require a great deal of attention. Stressing these concerns early on could help scientists and technologists to address these issues in a timely manner and to use their resources wisely. 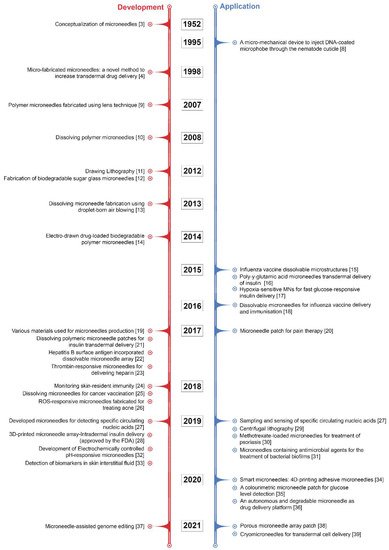 The skin’s position and large surface make it a suitable and non-invasive location not only for supplying therapeutic agents but also for sampling interstitial fluid for biomarker detection. Essentially, MN-based delivery and sampling are pain-free, non-invasive, and self-administered techniques that serve as an alternative to hypodermic needles, providing enhanced patient compliance. As research activities in the field intensified in the last few decades, microneedles (MNs) are produced using various constituent materials with several designs and shapes, from metals and glass to polymers and hydrogels, in conjunction with several delivery approaches. Among the approaches, four were initially proposed [40], with another developed later [41]: poke and patch (solid MNs), coat and poke (coated MNs), poke and flow (hollow MNs), poke and dissolve (dissolving MNs), and poke and release (hydrogel-forming MNs) (Figure 2). 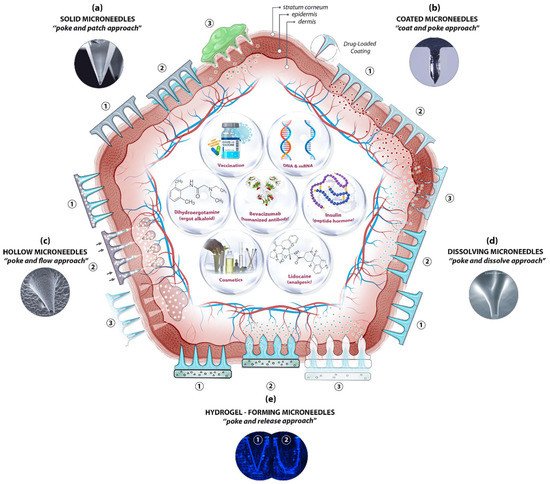 Figure 2. A schematic diagram of microneedle (MN)-based drug delivery approaches with the cross section of the upper layer of the skin. The approaches are (a) solid MNs, (b) coated MNs, (c) hollow MNs, (d) dissolving MNs, and (e) hydrogel-forming MNs. The step-by-step process of each delivery approach is numbered from 1 to 3. Representative microscopic images of MN types and examples of deliverable payloads such as drugs and bio-macromolecules are also shown. Images was adopted with permission from [42][43]).
The pore-performing pre-treatment of the “poke and patch” approach involves the application of a solid MN patch to create small holes in the skin, followed by a conventional drug application on the surface of the skin. The first reported fabrication of solid MNs was based on silicon to deliver calcein through excised human skin in vitro [4][8]. Cost, fragility, biocompatibility, and the complex manufacturing process have steered researchers to other materials, including metals, ceramics, and polymers, in order to achieve better outcomes. Although the production of solid MNs is technically simple—no loading or coating is required—the two-step administration procedures and the no exact dosing with drug reformulations requirement are the main limitations of solid MNs, along with safety matters. Using solid MNs for the delivery of proteins, hormones, and vaccines have been reviewed in detail elsewhere [1][44].
Coating therapeutic agents on the surface of microneedles (e.g., solid MNs—metallic, silica, or polymeric) is possible to create coated MNs. This “coat and poke” approach allows for effective drug delivery provided that the formulations are stable and uniformly layered on the surface of the MNs. The drug formulation should also be water-soluble and allow layer-by-layer coating procedures. Choosing an appropriate coating technique is key for the successful generation of coated MNs. The delivery of vaccines [45], insulin [46], and hormones [47], along with other macromolecules, has been reported for the “coat and poke” approach. A further extension in applications of coated MNs has been demonstrated recently for the ultra-sensitive detection of protein biomarkers in an immunised mouse model [48]. Polystyrene microneedles coated with a primary antibody were developed to capture inflammatory biomarkers in interstitial fluid with an improved limit of detection. The main distinguishing feature of coated microneedles is their ability to avoid the degradation of bioactive molecules throughout the microneedle production process, thereby ensuring bioactivity. Furthermore, coating is one of the easiest and most controlled methods of making microneedles functional. It enables sampling and isolation, especially for microneedles with detecting capabilities. Common limitations, however, are that the small doses and loaded cargo may lessen the strength of the MNs, resulting in low strength and penetration ability.
Relatively large quantities of therapeutic ingredients may be supplied into the skin with the “poke and flow” approach, which, by using hollow MNs, could potentially overcome the dose limitation associated with solid MNs [49]. With hollow MNs, it is technically possible to control the flow and dosing by diffusion or pressure or electronically (e.g., using a pump), and to integrate them into lab-on-chip devices. Similarly, bio-macromolecules, including proteins, vaccines, mRNA, and diagnostic agents, can be delivered via hollow MNs [50][51]. These MNs can also be used for the isolation and identification of biomarkers including glucose [52], and ECG measurements [53]. Nonetheless, the construction of hollow MNs is relatively complicated and suffers from clogging, drug leakage, structural fragility, and the requirement of a larger tip diameter, which leads to poor insertion.
The “poke and dissolve” approach, in which water-soluble therapeutic agents are carried into the skin, uses mostly biocompatible/biodegradable and low-cost polymers. Hyaluronic acid, sucrose, polylactic/glycolic acid (PLA/PGA), and chitosan are among the polymers often used for the construction of dissolvable MNs (dMNs). Because of their physicochemical characteristics, which allow designing and engineering with tuneable properties and functions, biomaterials like polysaccharides have been frequently utilised to create dissolvable MNs. This has resulted in carbohydrate-based microarrays with tremendous potential for serving as an innovative step in medication administration, detection, and biological retorting [50]. A large number of articles on the production of polymeric MNs have been seen in a very short period. Unlike silicon or metal, this sort of delivery means is based on the breakdown of MNs upon exposure to the skin’s interstitial fluid. Conditional on the nature of the MN material, the dissolving process discharges the cargo from the matrix for local or systemic administration. To date, the majority of soluble MNs have been produced by utilising polymers and simple sugars and by employing casting or micromoulding methods. The therapeutic loads are encapsulated, stored, and protected in the scaffold and delivered into the targeted area after the skin insertion via a polymer erosion mechanism, without leaving any biohazardous waste. A successful application of dMNs in vaccine delivery, for instance, has been demonstrated [54]. Sucrose and fish gelatin-based MNs have been used for vaccine delivery. During the phase I trial, the influenza virus vaccines supplied by the microneedle patches (MNPs) were found to be immunogenic and safe. The drawbacks associated with the sharp waste of solid MNs, the requirement of a pump, the high cost of hollow MNs, and the sophisticated layering procedure with coated MNs are eliminated here. However, dMNs have their own drawbacks, including low mechanical strength, low doses, and doubtful penetration abilities [55].
Soft materials such as swellable polymers, including poloxamer [56], PEG-crosslinked poly(methyl vinil ether-co-maleic acid), and silk fibroin with phenylboronic acid/acrylamide [57], have recently been used for hydrogel-forming MNs. The polymers absorb the interstitial fluid into their 3D matrix upon insertion into the skin, resulting in the delivery of therapeutic agents through created micro-conduits. The response-related delivery of therapeutic applications, such as glucose-responsive insulin delivery, is particularly noteworthy, as it eliminates the need for constant glucose monitoring and relies on the responses of physiological signals. Diagnostic applications of hydrogel-forming MNs have also been described for the detection of glucose [58] and lithium monitoring [59]. Fine-tuning of the delivery time is possible by adjusting the polymer decomposition from minutes to days. Nonetheless, their low strength and limited drug doses are among the limitations of hydrogel-forming MNs. This approach requires dramatic improvements to be used for any feasible commercial applications in the near future.

More
© Text is available under the terms and conditions of the Creative Commons Attribution (CC BY) license (http://creativecommons.org/licenses/by/4.0/)
Upload a video for this entry
Information
Subjects: Materials Science, Biomaterials
Contributor MDPI registered users' name will be linked to their SciProfiles pages. To register with us, please refer to https://encyclopedia.pub/register :
AYHAN CELIK
View Times: 62
Revisions: 2 times (View History)
Update Time: 29 Mar 2022
Table of Contents
1000/1000
Hot Most Recent