Submitted Successfully!
Thank you for your contribution! You can also upload a video entry related to this topic through the link below:
https://encyclopedia.pub/user/video_add?id=15877
Check Note
2000/2000
Oncolytic Adenovirus Therapy
Edit
This entry is adapted from 10.3390/ijms221910522

Oncolytic adenovirus therapy is gaining importance as a novel treatment option for the management of various cancers. Different concepts of modification within the adenovirus vector have been identified that define the mode of action against and the interaction with the tumour. Adenoviral vectors allow for genetic manipulations that restrict tumour specificity and also the expression of specific transgenes in order to support the anti-tumour effect. Additionally, replication of the virus and reinfection of neighbouring tumour cells amplify the therapeutic effect. Another important aspect in oncolytic adenovirus therapy is the virus induced cell death which is a process that activates the immune system against the tumour.

Adenoviruses belong to the class of non-enveloped viruses and contain double-stranded linear DNA with a 26-48 kb genome. They are among the best-studied viruses in the field of oncolytic virotherapy and are comparatively easy to produce in high titres and high purity for gene and cancer therapy and vaccine development [1]. The life cycle of adenoviruses is extrachromosomal and they are therefore considered non-integrating vectors that can infect both dividing and non-dividing cells [2]. Adenoviruses replicate not only in cancer cells, but also in tumour stem cells. Tumour stem cells often cause tumour recurrences due to an intrinsic resistance to therapy [3]. 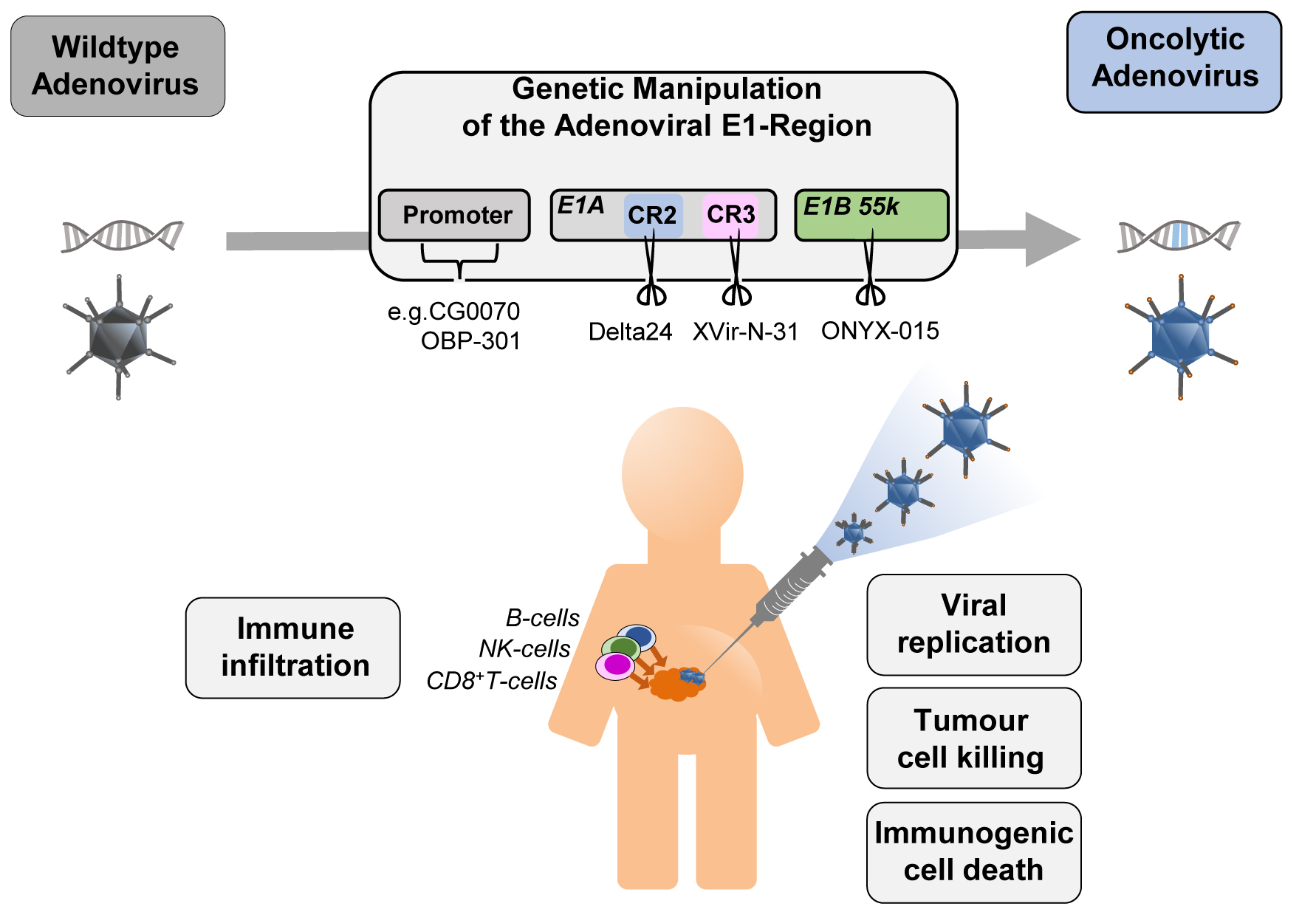 Figure 1. The four concepts for generating conditionally replicating adenoviruses with examples: CG0070 and OBP-301 for replication driven by specific promoters (CG0070 by E2F1 promoter, OBP-301 by hTERT promoter), Delta24 (Deletion in CR2), XVir-N-31 (Deletion in CR3), and ONYX-015 (Deletion in E1B55K) for deletions in the E1 region of the adenovirus. Injection into the tumour site leads to viral replication in and lysis of tumour cells and tumour stem cells. The release of signalling molecules (PAMPs -pathogen-associated molecular pattern, DAMPs -damage-associated molecular pattern) induce the immune system.

The replication cycle of adenoviruses can be divided into two phases. Accordingly, the adenoviral genome is organised into early (E1-E4) and late (L1-L5) transcription units, the latter encoding structural proteins. The early region 1A (E1A) encodes five different proteins [4][5], the two main isoforms 12S and 13S are required for early replication. The E1A 13S protein consists of 289 amino acids with four conserved regions (CR1-CR4) and can transactivate the other early transcription units E1B, E2, E3 and E4 [6], while E1A 12S lacks CR3.

E1 deleted adenoviruses are considered as replication-deficient and are used as shuttle vectors in gene therapy or for vaccination. Replication-competent adenoviruses that are restricted in their replication to cancer cells are therefore referred to as CrAd (Conditionally replicating Adenoviruses) [7] and are used clinically in oncolytic adenovirus therapy.

There are four general strategies in current clinical adenoviral vectors to achieve conditional replication (Figure 1): One concept is the replacement or overlay of the native E1 promoter with cancer cell-specific promoters, the other three concepts involve modification of the early transcription units E1A and E1B. In a number of constructs an E1A modification is combined with a tumour specific promoter. However, there are several other promising approaches that have not yet been tested in clinical trials.

3. Oncolytic Adenoviruses and the Immune System

Oncolytic adenoviruses induce immunogenic cell death (ICD) and reverse tumour immune escape. Virus-induced oncolysis leads to the release of signalling molecules (PAMPs -pathogen-associated molecular pattern, DAMPs -damage-associated molecular pattern). This stimulates the innate immune response and attracts antigen-presenting cells (APCs). Tumour-associated antigens (TAA) and neoantigens in the tumour microenvironment can be taken up by APCs and trigger a systemic immune response against the tumour, so that a "cold" tumour can be transformed into a "hot" tumour that is recognised by the immune system [8] and can lead to complete tumour eradication.

4. Arming of Adenoviral Vectors to Improve their Therapeutic Effect

Vector systems have been developed to arm adenoviruses, which can be used to insert genes that, for example, cause cytotoxicity or support the immune response. The position in the adenovirus genome determines the timing, duration and strength of gene expression.

5. Delivery and Tropism of Oncolytic Adenoviruses

Systemic application of adenoviral vectors leads to viral uptake in all organs and especially in the liver [9]. After intravenous administration, 90 % of the virus is eliminated within the first 24 hours by elements of the innate immune system [10]. A retention of the adenovirus in certain organs [11] can be achieved by direct injection into specific organs. However, within 14 days of Ad5 administration, a virus-specific humoral and cellular adaptive immune response occurs, eliminating virions and adenovirus-infected cells [12]. To ensure a potent anti-tumour response of oncolytic adenoviruses, modifications and delivery methods must be considered to achieve sufficient viral uptake into tumour cells. Adenovirus entry into the cell involves binding of the viral fibre knob to the cell via the coxsackievirus and the adenovirus receptor (CAR) [13]. Therefore, insertion of an Arg-Gly-Asp (RGD) motif into the HI loop of the fibre knob domain [14] can enhance infection of cells with low CAR expression [15].

Of all the oncolytic viruses, adenoviruses are most commonly found in clinical trials [16] and very often in combination with radiation, chemotherapy, small molecules or immune checkpoint inhibitors. Generally, vectors are employed whose tumour specificity is achieved by a modified E1 region. ONYX-015 (dl1520) was the first oncolytic adenovirus in clinical trials for the treatment of head and neck cancer [17]. The vast majority of clinical trials are conducted with Ad5-Delta-24 or combinations thereof with specific promoters. More recently, studies have also been initiated with vectors whose oncolytic specificity is based on directed evolution from a pool of different adenovirus serotypes (enadenotucirev, Colo-Ad1) or based on a mutation that prevents expression of the E1A 13S (XVir-N-31).

In addition to tissue specificity, the replication and lysis capacity of the oncolytic adenovirus are important for therapy. This can be enhanced by combination with small molecules that interact with signalling pathways such as the JAK/STAT pathway [18], radiation [19] or chemotherapy [20]. Stimulation of an immune response by the oncolytic adenovirus, introduction of certain transgenes or combination with immune checkpoint inhibitors allow the involvement of the immune system for systemically effective elimination of tumour cells.