Submitted Successfully!
Thank you for your contribution! You can also upload a video entry related to this topic through the link below:
https://encyclopedia.pub/user/video_add?id=15861
Check Note
2000/2000
Chickpea and Cold Acclimation
Edit
Upload a video
This entry is adapted from 10.3390/antiox10111693

Chickpea (Cicer arietinum L.), the third most important grain legume in the world, is an important source of protein to human and animals in Asia and Africa. Consequently, major chickpea growing areas lie in these two continents; however, it is also cultivated in the USA, Canada, and Australia primarily for export to Asian and African countries. Chickpea evolved in the warm climates of the Mediterranean region and is thus sensitive to low temperatures.

Chickpea (Cicer arietinum L.), the third most important grain legume in the world, is an important source of protein to human and animals in Asia and Africa. Consequently, major chickpea growing areas lie in these two continents; however, it is also cultivated in the USA, Canada, and Australia primarily for export to Asian and African countries. Chickpea evolved in the warm climates of the Mediterranean region and is thus sensitive to low temperatures [1][2][3]. Chickpea experiences stressful low temperatures either during vegetative or reproductive growth, depending on the cultivation region [2][4][5][6]. In northern India and southern Australia, chickpea experiences low temperatures (<20/10 °C) during reproductive growth wherein cold stress damages leaves and flowers, decreases pollen and ovule fertility, impairs fertilization and alters the transcription in anthers and leaves [4], leading to flower and pod abortion and reducing the yield potential [4][6][7][8][9][10]. The threshold temperature for chickpea is 21 °C and temperatures below are stressful to chickpea; consequently, many production regions in the world are susceptible to cold stress [2][10].
Cold-stress-induced aberrations in crops at various organizational levels, including reduced vegetative and reproductive growth, delayed phenology, enhanced leaf chlorosis and necrosis, changes in leaf hydration status, flower abnormalities, and damage to reproductive structures and yield including chickpea are well understood [1][2][4][11]. Cold stress results in fewer numbers of pods and seeds per pod leading to lower yield [6]. In cold-sensitive chickpea genotypes, cold stress at all anther development stages i.e., micro- or mega-sporogenesis, gametogenesis and at mature pollen stage results in flower abortion [2]. The flower abortion is caused either by disruption of gametogenesis or abnormal pollen/ovule development that leads to sterility [2]. Younger flowers are relatively more sensitive to cold stress compared to old flowers as younger flowers do not have developed pollen grains whereas older flowers have developed pollen grains and results in sterility [2]. In older flowers, cold stress also decreases the ability of the pollen grains to germinate and retards pollen tube growth leading to failure or lack of fertilization resulting in poor seed set and fewer seeds per pod [2][4].
Despite significant advancements in our understanding of cold stress responses of chickpea, the metabolic and molecular mechanisms affecting cold sensitivity, especially in flowers, are relatively poorly understood [4][9][10]. At the cellular level, cold stress induces damage to membranes, increases production of reactive oxygen species (ROS), denatures enzymes and proteins and causes hormonal imbalance [12]. Our recent study [4] focused on the impact of cold stress on metabolites and enzymatic antioxidants as well as expression of genes of these pathways in anthers of cold-sensitive and cold-tolerant genotypes. While starch and proline were decreased in the cold-sensitive genotypes, there was no change in the cold-tolerant genotype. This decrease in sensitive genotype resulted from down-regulation of sucrose and proline transporter genes whereas there was up-regulation of these genes in cold-tolerant genotype [4]. It was shown that pollen viability of cold-tolerant genotypes was linked to maintenance of starch, reducing sugars and proline levels [4]. Additional studies are, however, needed to elucidate complete mechanisms associated with cold-induced flower abortion.
Plants, even cold-sensitive ones, also possess the ability to acquire cold tolerance. Cold tolerance acquisition takes place when plants are exposed to gradually decreasing low non-freezing temperatures, a process known as cold acclimation [13]. In general, acclimated plants may have greater cold tolerance compared to plants those are not acclimated [14][15][16]. Cold acclimation has been reported in several crops such as oilseed rape (Brassica napus; [17]), barley (Hordeum vulgare; [18]), and Arabidopsis thaliana [19]. In oilseed rape, maximum cold tolerance was achieved by exposure to 3 d of acclimation in spring cultivars and between 6 and 9 d in the winter cultivars, and cold tolerance decreased with prolonged acclimation duration [17]. At physiological level, the cold acclimation in barley led to significant changes in tissue water content, carbohydrate content and resulted in improved tillers and growth compared to non-acclimated plants [18]. Cold acclimation also modified the photosynthetic machinery and enabled plants to survive under severe cold temperatures through manipulation of chlorophyll a fluorescence [19]. Though information is not available for chickpea, in other crops, cold acclimation encompasses several mechanisms involving membrane changes [14], osmoprotectant accumulation (e.g., carbohydrates, proline, glycine betaine), antioxidant up-regulation [13][15] coupled with changes in expression of genes of these pathways [16]. These modifications during cold acclimation prepare cells to tolerate subsequent stressful low temperatures. It appears that the differential ability of the crops or their genotypes to tolerate cold stress depends on the types of physiological or biochemical changes during the process of cold acclimation. 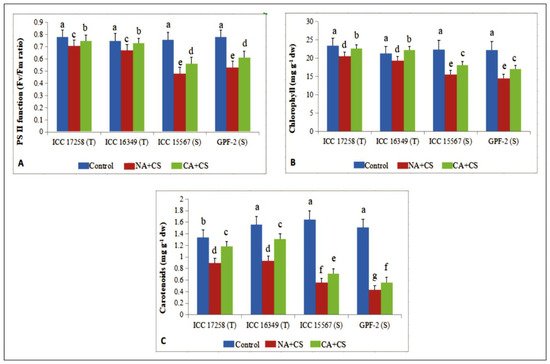 For reproductive parameters of male or female, cold-tolerant genotypes responded better to cold acclimation than cold-sensitive genotypes. The general effects of cold stress and cold acclimation on flowers, anthers and pollen grains are shown in Figure 2. 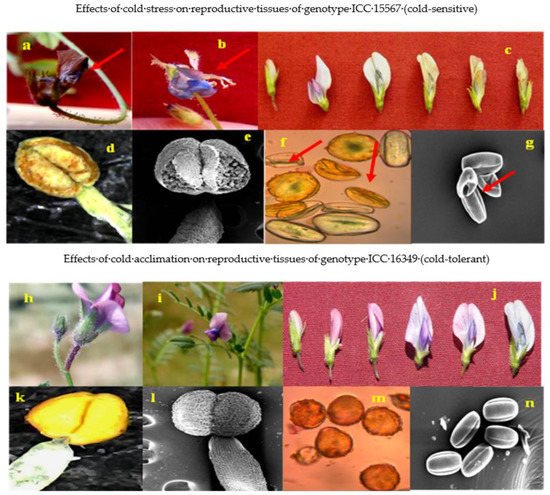 More
© Text is available under the terms and conditions of the Creative Commons Attribution (CC BY) license (http://creativecommons.org/licenses/by/4.0/)
Upload a video for this entry
Information
Subjects: Plant Sciences
Contributor MDPI registered users' name will be linked to their SciProfiles pages. To register with us, please refer to https://encyclopedia.pub/register :
Uday Jha
View Times: 38
Revisions: 2 times (View History)
Update Time: 11 Nov 2021
Table of Contents
1000/1000
Hot Most Recent