Submitted Successfully!
Thank you for your contribution! You can also upload a video entry related to this topic through the link below:
https://encyclopedia.pub/user/video_add?id=15856
Check Note
2000/2000
Climate-Smart Agriculture Technology Adoption by Farming Households
Edit
Upload a video
This entry is adapted from 10.3390/su132112130

Climate-smart agriculture (CSA) technologies have been developed by scientists and researchers amidst the high rise in climate change. Some of these technologies are improved versions of old practices while a few others are entirely new in the system. Appropriate technologies to adapt to the changing climatic condition will necessarily need to be drought-tolerant, grow and produce well within a short duration, tolerant to multiple pests and diseases, able to produce well under marginal soil fertility conditions, and high yielding among other desirable traits.

Across the globe, climate change is rapidly affecting every aspect of life, and the agricultural system is the most affected [1]. There has been a steady yet significant increase in temperature (both maximum and minimum) trends across the Sub-Saharan African (SSA) region. There is also a rise in sea levels, and heavy rains, hailstorms, and droughts have occurred in different locations within SSA in the past decade [2]. This has adversely affected the agricultural sector, it has shifted the farming trends and patterns, and caused the number of emigrants from the Sub-Saharan Africa countries to grow by 50% or more over the years 2010 and 2017 [3]. Food and nutrition security of the farming households has been affected, leaving about 39% of households in a state of food insecurity and as many as 49% of the households with different levels of micronutrient deficiency [4]. This suggests that the United Nations (UN) Sustainable Development Goals (SDGs) one and two (no poverty and zero hunger) may not be actualized on the continent, despite the efforts at different levels to end poverty and increase food and nutritional security globally.

About 80% of farmers in SSA are smallholders [5]; they are largely vulnerable to the vagaries of the changing climate. They are poorly resourced and lack adequate knowledge of the phenomenon, hence there is a need to develop their capacity to appreciate and use the available adaptation and mitigation techniques. Since the emergence of climate change, measures have been put in place by the governments and organizations to check the progression of climate change and reorient the agricultural systems to effectively support agricultural development and ensure food security [6].

In addition to climate change, other global forces, or megatrends, are currently underway, with the potential to exacerbate the challenges that African countries are facing in transforming their economies. These megatrends include demographic changes, especially the upsurge in the population of the youth, growth in the middle class, increased urbanization, rapid technological changes, and the associated increase in anti-social behaviors. The supply of products from natural resources, such as food, water, energy, and ecosystems services, continues to receive pressure as demographic trends are projected to yield an increase in Africa’s population by the year 2050 [7]. Concepts such as climate-smart agriculture could be used to help smallholder farmers adapt to climate change and, at the same time, mitigate greenhouse gas (GHG) emissions.

The earlier definition of CSA by [8] stated that “Climate-smart agriculture (CSA) is an approach that helps to guide actions needed to transform and reorient agricultural systems to effectively support the development and ensure food security in a changing climate.” This came at a time when there was considerable controversy around the concept and approaches to sustainable agricultural development. These earlier definitions have been refined by other authors who largely integrate terms, such as mitigation, adaptation, and management to foster a more coherent understanding of the concept. CSA is an integrative approach that addresses the interlinked challenges of food security, variability in climate, and other systemic issues such as demography, that support agricultural production. The three central objectives of CSA include: (a) sustainably increasing agricultural productivity, to support equitable increases in farm incomes, food security, and development; (b) adapting to and building the resilience of agricultural and food security systems to climate change at multiple levels; and (c) reducing greenhouse gas emissions from agriculture (including crops, livestock, and fisheries) [9].

2. Climate Change and Its Adverse Effects

Since the early 1970s, climate change and its adverse effects have become a reality in Africa [10], resulting in new and diversified phenomena, including, among other things, an increase in temperature, low agricultural production, intense alterations in weather patterns, and disease transmission. Research has shown that Africa’s carbon (CO 2) emissions are practically lower than the rest of the world, yet the continent is the most vulnerable to the effects of climate change [11]. Africa’s vulnerability to climate change is attached to a chain of factors, including weak adaptive capacity, high reliance on ecosystem goods for livelihoods, and traditional agricultural systems [12]. The impacts of climate change posed a significant challenge to global food and nutrition security, and this is projected to worsen over the coming years due to livelihood pressures, such as a rise in population, economic development, urbanization, and the frequent occurrences of natural hazards, such as extreme temperatures, droughts, and floods, among others [13]. The vulnerability to the constraints from climate change will be further exacerbated by the growing food demand from the increasingly rich population in SSA, and the reduction of the rural population due to huge migrations to the urban cities in search of white-collar jobs [14].

Figure 1 shows the awareness and use of CSA technologies in Eastern Africa on intercropping, seed selection, improved varieties, agroforestry, and minimum tillage. 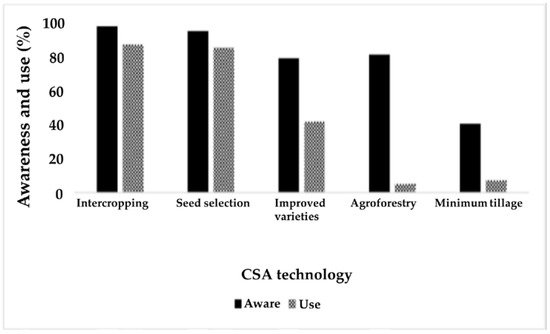 Figure 1. CSA technology awareness and use in some locations in Eastern Africa. Source: FARA, 2015A [15].

Africa is most vulnerable to the effects of climate change, which is partly due to social, economic, and environmental factors. Climate change is rapidly interacting with non-climate drivers, and this amplifies the vulnerability of agricultural systems, mainly in the SSA region, as confirmed by FARA in 2015 [15]. The evidence of climate change has called for more knowledge in developing tools, technologies, and methods to deal with this global evil of our time, which has left SSA most vulnerable. Although there are CSA practices that have been adopted and used by farming households, these still have limited knowledge of the concept of CSA and its practices [16].

SDG one and two (poverty eradication and zero hunger) stands the risk of not being achieved by the year 2030 if a drastic effort is not channeled to widely encourage access to sustainable technology and use in Africa agriculture.

Our study further showed that the demographic shift in Africa countries especially the recent upsurge in youth population and its different social implications, such as unemployment, rural-urban migration, increase in antisocial activities, violent behaviors, terrorism, etc. have an indirect but noticeable implication on climate change and the need for CSA. Other demographic changes, such as the increase in the proportion of individuals in the middle class has resulted in increasing demand for industrially processed food and more carbon emission.

As a recommendation, we propose good capacity building and youth empowerment to champion CSA technology adoption and utilization in the continent. It is further recommended that farmers are capacitated to change their orientation about the effect of climate change and the best practice to adopt in compliance with the three pillars of CSA.