Submitted Successfully!
Thank you for your contribution! You can also upload a video entry related to this topic through the link below:
https://encyclopedia.pub/user/video_add?id=15846
Check Note
2000/2000
Polyurethanes and Green Chemistry
Edit
Upload a video
This entry is adapted from 10.3390/pr9111929

Polyurethanes are most often called “green” when they contain natural, renewable additives in their network or chemical structure, such as mono- and polysaccharides, vegetable oils, polyphenols, or various compounds derived from agro-waste white biotechnology. The use of these natural substrates is in line with the principles of green chemistry. However, other principles among all 12 can also be used in the production of polyurethanes.

The history of using polyurethanes is almost as long as that of synthetic polymers, in general.
As the name “polyurethanes” stands for a huge group of various polymers, which only have the same urethane moiety and the remaining parts of their chemical structure are completely different, the form, structure, and, above all, the properties of polyurethanes are various. Polyurethanes cover a wide group of polymers that differ in chemical structure, morphology, and even physical state, and the method of obtaining them is also completely different. Typical cast polyurethanes, elastomers, thermoplastics, etc. are obtained as a result of the reaction of the addition of isocyanate and hydroxyl groups (Figure 1), during which no by-products are formed (of course, as long as the synthesis is carried out). On the other hand, polyurethane foams are obtained in a polycondensation reaction, where the foaming agent is often water (or some low-boiling, inert solvent) that reacts with isocyanate groups to form CO2 (Figure 2).

Figure 1. Scheme of polyurethane synthesis based on the example of the prepolymer method.

Figure 2. Scheme of polyurethane foam synthesis based on the example of the prepolymer method and with water as a foaming agent.

2. The Principles in the Green Chemistry of Polyurethanes

As the volume of polyurethane waste is huge, which is mainly related to the number of foams used, conducting the production of polyurethanes in accordance with the principles of green chemistry gives us a chance to significantly reduce waste in the environment.
12 principles of green chemistry are:
1. Prevent waste, 2. Maximize atom economy (Synthetic efficiency), 3. Design less hazardous chemical syntheses (benign syntheses), 4. Design safer chemicals and products (benign products), 5. Use safer solvents and reaction conditions (avoid auxiliaries), 6. Increase energy efficiency (energy efficiency), 7. Use renewable feedstocks (renewable feedstocks), 8. Avoid chemical derivatives (avoid protecting groups), 9. Use catalysts, not stoichiometric reagents (catalysis), 10. Design chemicals and products to degrade after use (degradation or recovery), 11. Analyze in real time to prevent pollution (real-time analysis), and 12. Minimize the potential for accidents (prevent accidents) [1][2].
Principle 1.
Waste prevention is a principle that covers almost all the other 11 principles; 100% consumption of starting substrates (Principles 2 and 9) prevents the formation of waste,
unusable residues of these compounds. A nuisance waste is also a solvent, which must be removed from the polymer solution after the synthesis reaction, so it is more preferable to use the solvent-free method (Principle 5). Indirectly, energy-intensive processes are also a source of waste from energy production (Principle 6). The introduction of natural materials into the polyurethane structure or network is often the cause of the increased susceptibility of these polyurethanes to environmental degradation (Principles 7 and 10). This is the direct reason for the reduction of the amount of polymer waste deposited in the natural environment. Instead of using blocking compounds, which are post-production waste, intramolecular blocking can be used (Principle 8). The reactions for obtaining polyurethanes are carried out catalytically rather than stoichiometrically, thus avoiding the use of excess reactants that could constitute post-reaction waste (Principle 9). In addition to the natural additives/substrates mentioned previously, the susceptibility to degradation of polyurethanes can also be modelled by introducing into their structure degradable synthetic substrates with degradable groups (Principle 10). Strict control of the purity of
the reagents, the degree of conversion of their functional groups, as well as the process parameters, on an ongoing basis during the synthesis, are necessary to obtain a good quality product, not a waste (Principle 11). The accidents, that generate waste, could have been avoided if the manufacturer’s recommendations for the substrates and finished products were followed (Principle 12).
Principle 2.
An important issue in the design of the synthesis process of each polymer is the development of optimal reaction conditions, as well as the selection of appropriate reactants and their mutual relationship. This is to obtain the product in question with optimal performance. An example may be the preparation of a polyurethane from a poly(ether)triblock copolymer as a soft segment with "ε-caprolactone/poly(ethylene glycol) molar ratio = 12 [3], or the development of the synthesis of non-isocyanate polyurethanes, for which the highest degree of substrate conversion was obtained at the ratio of a molar amine/cyclic carbonate of 1.2 [4].
Principle 3 and 4.
Isocyanates are regarded as toxic compounds, hence the search for methods to obtain polyurethanes without these substrates. The most promising method of the non-isocyanate polyurethanes synthesis is using the cyclic carbonates [5].
Principle 5.
The use of solvent-free methods is the most optimal way to prevent the problem of solvent evaporation, condensation, and purification. Water or supercritical fluids [6][7][8][9][10][11] may be used when the presence of a solvent in polyurethane synthesis is essential.
Principle 6.
An example of a process to simplify the reaction and reduce the number of intermediate steps while at the same time reducing the amount of energy consumption is the reaction to obtain oligoetherols, used in the synthesis of polyurethane foams, from carbazole with an excess of glycidol and then with oxiranes or alkylene carbonates.
Principle 7.
A common and ecologically beneficial direction of research is the replacement of traditional substrates, derived from crude oil, with compounds derived from renewable sources. This trend is also visible in the synthesis of polyurethanes. Some examples of biobased substrates are showed below. 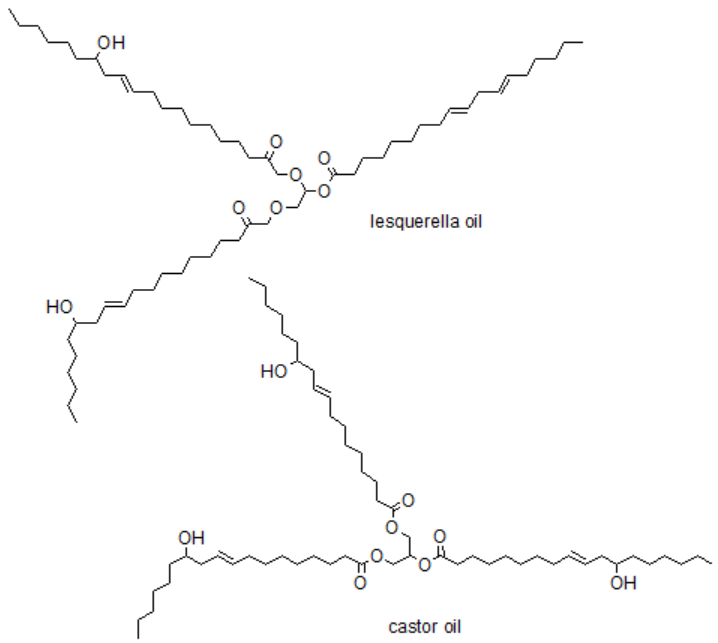 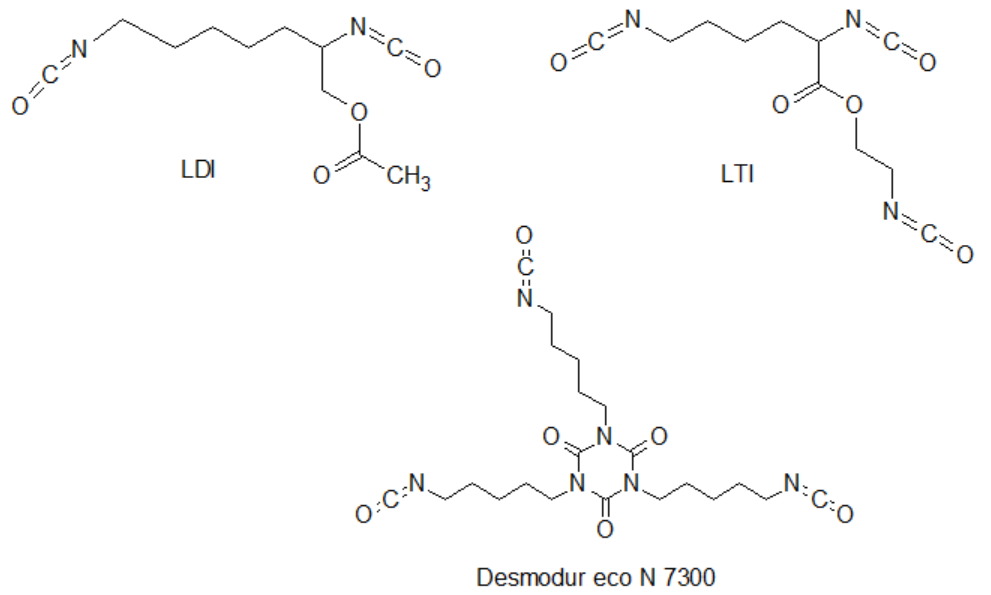 Principle 8.
Usually, there is no need to use any functional group blocking compounds during the synthesis of polyurethanes, which does not generate additional production waste. However, in some cases, the use of blocking agents is necessary. It increases the durability and stability of the substrate system when the polyurethane is obtained, e.g., by the user directly on the bonded or protected surface.
Principle 9.
Although isocyanate groups are very reactive and often do not need the support of a reaction catalyst, they are used to drive a given reaction, thereby reducing the risk of a waste polymer material with inferior properties. Polyurethanes and polyols used for their synthesis can be obtained with the use of biocatalysts .
Principle 10.
Historically, polyurethanes are known for their resistance to external factors. However, by introducing the appropriate groups into the structure of polyurethanes, materials susceptible to chemical hydrolysis, oxidation, and enzymatic degradation can be synthetized. The most popular way to obtain biodegradable polyurethane is its modification with natural compounds which, under the influence of various environmental factors, can return to nature.
Principle 11.
Process control during polymer synthesis is necessary to prevent the formation of by-products, but also to prevent products of poor quality, which will not be suitable for use.
Principle 12.
Common sense, compliance with procedures, and knowledge of the properties of the substrates used allow for safe polyurethane synthesis processes, as evidenced by successfully and safely obtained polyurethane products, both in research laboratories and in industrial plants, as well as by individual consumers. However, there may be situations where, for example, insufficiently reduced pressure will lead to ignition of the diisocyanate during distillation or there may be situations where poorly maintained production lines lead to leakage of substrate.

What can be done to make polyurethanes greener?
The development of the polyurethane industry goes in one direction with the polymer industry in general. As shown in this work, the basic directions of changes, taking place during the synthesis of polyurethanes, are: (1) the use of non-toxic substrates and auxiliary compounds (solvents and catalysts); (2) obtaining products with appropriate strength during use but which degrade after their lifetime; and (3) the use of less energy-intensive processes. The modification of polyurethanes with compounds of natural origin is of significant importance. Their presence in the polyurethane network or in its chemical structure increases the non-toxicity and susceptibility to degradation in the environmental conditions of this material.