Submitted Successfully!
Thank you for your contribution! You can also upload a video entry related to this topic through the link below:
https://encyclopedia.pub/user/video_add?id=15826
Check Note
2000/2000
Reactive Carbonyl Species in Plant Physiology
Edit
Upload a video
This entry is adapted from 10.3390/plants8100391

Oxidation of membrane lipids by reactive oxygen species (ROS) or O2/lipoxygenase leads to the formation of various bioactive compounds collectively called oxylipins. Reactive carbonyl species (RCS) are a group of oxylipins that have the α,β-unsaturated carbonyl structure, including acrolein and 4-hydroxy-(E)-2-nonenal. RCS provides a missing link between ROS stimuli and cellular responses in plants via their electrophilic modification of proteins.

Plant cells are very rich in reducing agents and redox catalysts. In addition, the above-ground parts contain many pigments. Such conditions are favorable for the production of reactive oxygen species (ROS) via the reduction or excitation of O2, and indeed, there are large fluxes of ROS production [1]. If their levels are regulated properly, then ROS are excellent molecules for biological signals; they can turn on biochemical switches temporally in micro-local regions in a cell, and due to their lifetime, the signal is turned off in a short time.
One of the earliest reports of ROS signaling in plants was on the systemic defense response, demonstrating H2O2 as a remote signal to bring the oxidative information emitted from the local photooxidized leaves [2]. ROS act as signals, not only in stress responses, but also in hormonal responses and development [3]. It has been shown that the abscisic acid (ABA)-induced activation of respiratory burst oxidase-homolog NADPH oxidases (RBOH) in guard cells contributes to the stomata closure response through the action of H2O2 [4]. Involvement of ROS has also been suggested in the auxin-induced formation of lateral roots [5] and adventitious roots [6]. ROS are also critical signals for initiating programmed cell death (PCD) in development [7], senescence and pathogen response [8]. Today, there is keen interest in the biochemical processes of ROS signal transduction in plants, but the signaling pathway from ROS to putative sensor/receptor proteins has been poorly elucidated.

2.1. Reaction of RCS with Proteins

Carbonyl compounds are electrophiles and can react with nucleophilic groups on biomolecules to make a covalent bond [9]. Typical reactions are Schiff base formation and Michael addition. Schiff base is formed between a carbonyl group and an amino group through dehydration (Figure 1A). This reaction proceeds fast at pH 5, but slower at lower or higher pH conditions. The formed Schiff base can be hydrolyzed under a highly acidic condition. When a thiol group or an amino group reside nearby the Schiff base, the secondary reactions may proceed to form a complex structure [9], which may contribute to the formation of cross-link between proteins. Michael addition is the reaction of the electrophilic β carbon of an RCS molecule with the thiol sulfur, amino nitrogen, or the imidazole τ-nitrogen atom to form a covalent bond (Figure 1B). They also react with the guanine base of nucleic acids, leading to a mutation [10]. The Michael reaction with a thiol is reversible. The equilibrium constant of the reaction between GSH and an RCS differs greatly, depending on the type of RCS molecules [11]. 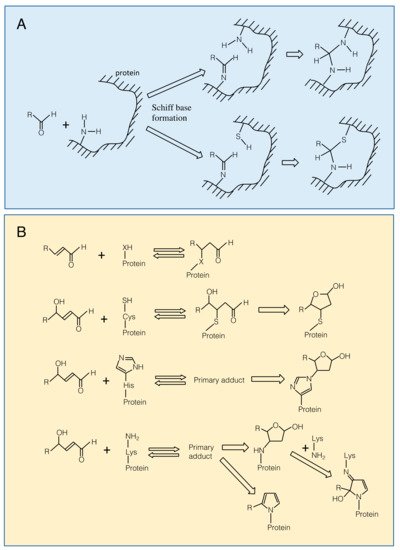 RCS added from outside of the cells are toxic to plants when their concentrations are high. Reynolds [37] evaluated the toxicity of various carbonyls for their ability to inhibit germination of lettuce seeds and demonstrated that RCS have relatively higher toxicity than non-RCS carbonyls. Exposure of A. thaliana plants to acrolein or methylvinylketone (MVK) as volatiles (10 μmol/L air) caused a decrease in PSII activity in 15 h [38]. Similarly, (E)-2-hexenal (100 μmol/L air) significantly decreased PSII activity in 5 h [39]. When a 20 μM aqueous solution of HNE was infiltrated into A. thaliana leaves, PSII was inactivated in 15 h [38] and higher concentrations at mM levels caused necrosis [40]. Aqueous 10 μM HNE inhibited root elongation in tobacco plants [41].
At subcellular levels, the addition of HNE to isolated mitochondria inactivated respiratory metabolism in the matrix [42]. In this case, the most sensitive targets were lipoate enzymes as described above [25]. When isolated chloroplasts were treated with acrolein in darkness, their photosynthetic activity was lost, but photosynthetic electron transport chain was insensitive [27]. On the other hand, the addition of acrolein to the Synechocystis cells under light inactivated PSII and caused growth inhibition. The inactivation mechanism is accounted for by the combined effect of acrolein and hydroxyl radical, which was generated under light [43].

Exogenous application of RCS at low levels to whole plants can induce arrays of defense genes. In A. thaliana seedlings exposed to (E)-2-hexenal, a C6 volatile RCS that can be produced enzymatically in response to pathogen attack, defense response genes including phenylpropanoid synthesis enzymes were induced [44][45]. Low levels of MDA strongly upregulated many abiotic/environmental stress-related genes such as ROF1 and XERO2 in A. thaliana [36]. When acrolein and MVK were infiltrated to A. thaliana leaves, pathogenesis-related genes such as HEL/PR4 were activated [38]. Fumigation of A. thaliana plants with RCS induced a group of heat shock response genes [46]. The putative RCS receptor involved in this response should have a specificity to certain types of RCS because this signaling effect was observed for RCS of carbon chain length 4–8, but not for the C3 RCS acrolein. Addition of acrolein, HHE and HNE to A. thaliana caused increases in the activity of various ROS scavenging enzymes such as catalase and ascorbate peroxidase [47]. Interestingly, the extreme halophyte Eutrema parvulum, a close relative to A. thaliana, did not respond similarly to these RCS; the enzyme activities were not increased. This suggests that the RCS perception systems or RCS scavenging selectivity and capacity in halophytes are different from those in glycophytes.
The addition of acrolein to C. reinhardtii cells up to 600 ppm increased the GSTS1 content and improved cells’ tolerance to 1O2. On the basis of transcriptomic analysis, it is suggested that acrolein can mediate the gene expression signal triggered by 1O2 [48].
OPDA, a phytohormone and a precursor to jasmonic acid (JA), has a cyclopentenone structure and is an RCS. When applied to A. thaliana plants exogenously, OPDA induces a set of defense genes that is distinct from those induced by JA [49], and represses the expression of those involved in cell cycle regulation and cell growth [50]. This OPDA signal is recognized by the TGA transcription factors [51]. OPDA can be bound also to cyclophilin 20-3 and alter the protein’s ability to trigger the formation of cysteine synthase complex, and thereby affect the redox homeostasis [52].