Submitted Successfully!
Thank you for your contribution! You can also upload a video entry related to this topic through the link below:
https://encyclopedia.pub/user/video_add?id=15764
Check Note
2000/2000
Diabetic Micro-Complication Management—Diabetic Neuropathy
Edit
This entry is adapted from 10.3390/ijtm1030013

Diabetes mellitus (DM), a metabolic disease, is currently a major public health issue that greatly affects the socio-economy. The main pathological feature of DM is either insulin secretion discrepancy or pancreatic β-cells damage. The inclination of a sedentary lifestyle has been considered a possible risk factor for the progression of DM. Several chronic and life-threatening micro and macrovascular complications, such as coronary heart disease, cardiopathy, cerebrovascular and peripheral artery disease, nephropathy, retinopathy, and neuropathy, may occur due to chronic metabolic syndrome.
Pain caused by a lesion or disease of the somatosensory nervous system is called neuropathic pain. The most prevalent and frequently observed subtype of this peripheral neuropathy is diabetic neuropathy, which is defined as “pain as a direct consequence of abnormalities in the peripheral somatosensory system in patient with diabetes” [1]. In comparison to other micro-complications (such as retinopathy, nephropathy, and ischemic heart disease), diabetic neuropathy is the most prevalent and their affection rates vary based on diabetes type. Many epidemiologic studies showed that individuals with type II diabetes mellitus (T2DM) are more prone (6.1%) to be affected by neuropathy than individuals with type I diabetes (T1DM) (2.8%) [2][3][4]. Some other studies also showed that diabetic neuropathy increases dramatically with age and onset of disease.

Diabetic neuropathy is a multifactorial condition that includes several risk factors, such as hemoglobin A1c (HbA1c) level (a measurement of glycated hemoglobin to determine average daily glucose level), hypertension, smoking, and obesity [5]. The co-occurrence of neuropathy and glucose intolerance in diabetic patients has provided an important insight into glucose dysmetabolism in developing neuropathy and hyperglycemia. The early sign of neuropathy progression is the involvement of small-nerve-fibers [6]. Both human and animal models of diabetes showed aggregation of polyols during the progression of neuropathy, but the role of accumulated polyols is not clear yet. Several aldose-reductase inhibitors have also failed to ameliorate diabetic polyneuropathy [7], suggesting an unclear role of aggregated polyols.
Some studies also suggested that mitochondria of sensory neurons at the dorsal root ganglia might have a potential role in diabetic neuropathy [8]. In accord, mitochondria of hyperglycemic neurons are the source of mass production of reactive oxygen species (ROS), which could damage DNA and membranes and lead to nerve desensitization. Impairment in mitochondrial fission-fusion homeostasis regulates mitochondrial shaping and number and could dysregulate cellular functioning and lead to degeneration [9]. The mass production of oxidative stress has been suggested as a major culprit of diabetic neuropathy [8]. Potential antioxidants that could scavenge hydroxyl, superoxide, and peroxyl radicals, such as α-lipoic-acid, proanthocyanidins, luteolin, rutin, and quercetin, have been shown to improve nerve conduction velocity and symptomatic relief in diabetic neuropathy [8][10]. Moreover, advanced glycation end products (AGE) from hyperglycemia increases cytokines production in monocytes and endothelial cells. It has been speculated that AGE might injure nerve fibers by affecting matrix metalloproteinases [11].

Patients suffering from distal sensory polyneuropathy often possess etiologies other than diabetes itself [19][20]. A study of patients with symptomatic neuropathy reported diabetes causes neuropathies in 74% of the group [19]. One-third of patients were diagnosed with neuropathy not related to diabetes. A major portion of these patients had chronic inflammatory demyelinating neuropathy that caused non-diabetic neuropathy. Diabetes is one major cause of polyneuropathy, but not the only one. Several other general factors, such as alcoholism, vitamin deficiency, drug-induced neuropathy, monoclonal gammopathy, POEMS (Polyneuropathy, Organomegaly, Endocrinopathy, Monoclonal protein, Skin changes) syndrome, and amyloid polyneuropathy, have also been attributed to neuropathy pathogenesis. Therefore, these factors also need a diagnosis to find the exact cause, which would help in designing proper treatment plans.

Diabetic neuropathy is a unique neurodegenerative disorder that impairs the peripheral nervous system. Although it is still under research, primarily diabetic neuropathy targets sensory axons, autonomic axons, and motor axons. Progressive neuropathies retract terminal sensory axons in the periphery. Neuropathic damages begin with distal sensory first, such as loss of distal leg epidermal axons and damages to the proximal limbs sensory system. In addition, diabetic neuropathy could target entire neurons. Again, it is debated that from where it starts. Whether the peripheral axons and associated Schwann cells are the primary targets or neuronal cell bodies at dorsal root ganglia remains unclear.
Primarily diabetic neuropathy does not demyelinate. In progressive conditions, chronic hyperglycemia severely affects Schwann cells and causes demyelination [21][22]. Schwan cells provide mutual support to axons; damage in Schwann cells might cause damage to the axon, which might change a proteins’ position at the Ranvier node and axon trafficking [23]. Injuries to Schwann cells might also cause inadequate support to the cytoskeleton of axons and improper intra-axonal mRNA translation within the distal axon [24].
The changes in neuronal cell bodies also affect axons, especially distal terminals. Chronic diabetes changes sensory neurons phenotype at the dorsal root ganglia, which links their relationship with the distal axon branches. A rat model of chronic T1DM showed a gradual loss of neurofilaments synthesis and export [25]. These neurofilaments are structural scaffolds of the axon. Another preclinical study in diabetic animals proposed endoplasmic reticulum stress in diabetes could potentiate peripheral nerve damage and affect functioning [26]. Although the exact mechanism of the disease pathogenesis is not clear yet, several in vitro and in vivo models of diabetes have shown hyperglycemia could alter several critical functions in plasticity, including growth-associated protein 43 (GAP43), Heat Shock Protein (HSPs) expression [27][28], and poly(ADP-ribose) polymerase (PARP) [29][30] at the dorsal root ganglia region (Figure 1). These data indicate that dysfunction in these pathways promotes abnormal protein processing, inducing oxidative damage and mitochondrial dysfunction, which, in turn, may damage peripheral nerves [24]. 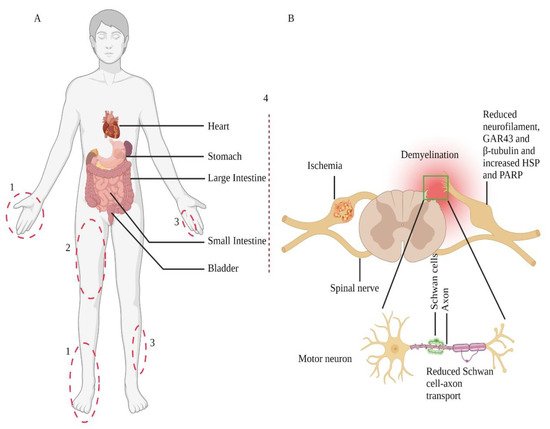 The peripheral nervous system plays a critical role in energy substrates synthesis and their uses during diabetic neuropathy. The understanding of this mechanism might give a clear picture of the pathophysiologies of diabetic neuropathy. Each Schwann cell, dorsal root ganglia, and axon produces NADH and FADH2 from glucose and fatty acids, and Schwann cells uptake long-chain fatty acids to convert them into one molecule of acetyl-CoA via β-oxidation. Afterward, it transports this acetyl-CoA to the tricarboxylic acid cycle to produce NADH and FADH2. When the transport system is saturated in diabetes, due to the overload of glucose substrate, the acetyl-CoA is converted into acylcarnitines. Accumulation of these acylcarnitines is pathogenic for both Schwann cells and dorsal root ganglia neurons, leading to axonal degeneration and diabetic neuropathy [32].

Some preliminary research strongly suggests that insulin and nerve growth factor (NGF) have structural similarities. Insulin actions on neurons [33] or insulin increased substantial neurite outgrowth cultured adult sensory neuronal cells [34]. Insulin receptors are also expressed in dorsal root ganglia neurons and axons [35][36], while the expression substantially declines in experimental diabetic neuropathy. The intrathecal or intranasal delivery of insulin, independent of glucose levels, has shown reversal of diabetic neuropathy-induced decline [35][37]. Insulin administration near the nerve or in the plantar skin, where it accesses dermal axons, also repairs abnormalities of diabetes in experimental animal models [38][39]. Although these findings are promising, the reversal of hyperglycemia by insulin has little effect on neuropathy with T2DM. In contrast, normoglycemia by insulin therapy has substantial benefits in T1DM and neuropathy. The major obstacle of neuropathy treatment via insulin in T2DM is insulin resistance. Phosphorylation of insulin-receptor substrate 2, which is a downstream mediator of the insulin signal transduction pathway, might have an important role in insulin resistance [40].

4. Diagnosis and Management of Neuropathic Pain

Neuropathic pain is a group of syndromes with different pathophysiology and clinical manifestations. It is of the utmost importance to assess the source of pain that confirms the underlying disease in the peripheral or central nervous system. Although the basic diagnosis system is the same for both peripheral and central nervous system neuropathy [41][42], their assessment tools are different, such as punch skin biopsy for peripheral while magnetic resonance imaging for central neuropathy [43]. According to the guideline of the Neuropathic Pain Special Interest Group (NeuPSIG) of the International Association for the Study of Pain (IASP), the first step in neuropathic pain diagnosis is assuring whether the pain is neuropathic or if the patient has a neuropathic component in mixed pain syndromes [41][42]. The stepwise approach for diagnosing and managing neuropathic pain contains the history of the patient, physical examination, and confirmatory tests. The NeuPSIG has established four distinct steps to grade and determine neuropathic pain [42][43]: Step 1: a medical history of a patient should indicate the patient has a disease that can cause neuropathic pain. Step 2: the underlying disease that can distribute pain. If this condition is met, the physician then performs a detailed clinical examination. Step 3: as the traditional testing tools are incapable of determining the spatial extent of perceived ongoing pain, the spatial extent of sensory signs serves as a surrogate. Once this condition is met, the pain is probably neuropathic pain. Step 4: a suitable confirmatory test performed based on the suspected disease. This method verifies neuropathic pain and aids in the appropriate diagnosis and therapy [42][43].

Current diabetic neuropathy management includes glycemic control, foot care, and symptomatic treatment. Indeed, glycemic control has a benefit/risk ratio in T2DM patients [44][45], but hyperglycemia is not the prime driving cause of all complications in T2DM [7]. If it were the prime cause, any diabetic complications, including neuropathy, would have been efficiently treated because control for glycemia was first given to all T2DM patients [46]. Although several studies claim that efficient glucose control significantly reduces or delays neuropathy in T1DM [47][48], the effectiveness in T2DM has yet to be uncovered [49][50][51][52]. It is possible that the pathophysiology of neuropathy differs between T1DM and T2DM [49]; therefore, the treatment strategy needs to be adjusted. A cohort study showed that intensive glucose control at the early phase could avoid diabetic complications and mortality [53]. However, extensive glucose control could lead to hypoglycemic episodes [49] and hypoglycemia-induced neuropathy [54][55]. Since neurons consume more glucose than other cells, hypoglycemia can be devastating; thus, excessive glycemic control should be avoided.

More
© Text is available under the terms and conditions of the Creative Commons Attribution (CC BY) license (http://creativecommons.org/licenses/by/4.0/)
Upload a video for this entry
Information
Subjects: Pharmacology & Pharmacy
Contributor MDPI registered users' name will be linked to their SciProfiles pages. To register with us, please refer to https://encyclopedia.pub/register :
Prawej Ansari
View Times: 57
Revisions: 3 times (View History)
Update Time: 11 Nov 2021
Table of Contents
1000/1000
Hot Most Recent