Submitted Successfully!
Thank you for your contribution! You can also upload a video entry related to this topic through the link below:
https://encyclopedia.pub/user/video_add?id=15672
Check Note
2000/2000
Metabolomics in Retinal Diseases
Edit
Upload a video
This entry is adapted from 10.3390/biology10100944

The retina is abundant with highly specialized neurons that receive, process, and transduce light signals. It is composed of the monolayered retinal pigment epithelium (RPE) and the multi-layered neural retina, which contains five major types of neurons and is regarded as part of the central nervous system.

As can be seen in Figure 1, the neurosensory retina is organized into three layers of cells: the outer nuclear layer (ONL), inner nuclear layer (INL), and ganglion cell layer (GCL); and two layers of nerve fiber or synapse: the outer plexiform layer (OPL) and inner plexiform layer (IPL). Dysfunction in rod, cone, RPE cell, retinal vascular endothelial cell, or other cells (e.g., Müller glia cell) can result in various retinal diseases, with consequential vision loss. Blindness and vision impairment affect a large proportion of the population, having a detrimental impact on quality of life, and constituting a major public health problem. Alongside cataract and uncorrected refractive error, glaucoma and age-related macular degeneration (AMD) have become the leading causes of blindness worldwide for those aged 50 years or over [1]. Although much effort has been devoted to preventing and eliminating avoidable blindness, the population with blindness is expected to reach 61.0 million by 2050 [2]. The prevention and therapy of blindness and vision impairment require a more comprehensive understanding of the pathogenesis underlying retinal diseases. Currently, many new and advanced technologies are being applied to the study of retinal disorders, especially some “omics” technologies. In this article we focus on metabolomics. 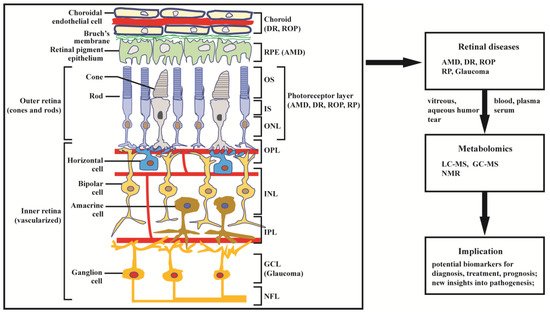 Figure 1. Structure of retina and application of metabolomics to retinal diseases. The retina can be divided into inner retina and outer retina. The inner retina consists of the nerve fiber layer (NFL) ganglion cell layer (GCL), inner plexiform layer (IPL), inner nuclear layer (INL, where amacrine, bipolar, and horizontal cells are localized), and outer plexiform layer (OPL); the outer retina consists of the outer nuclear layer (ONL) of rod and cone photoreceptors, which are compartmentalized as outer segments (OS) and inner segments (IS). The retinal pigment epithelium (RPE) cells and choroid endothelial cells provide nutrition across Bruch’s membrane to support photoreceptor cells. Age-related macular degeneration (AMD) primarily affects the RPE and photoreceptor cells; diabetic retinopathy (DR) and retinopathy of prematurity (ROP) mainly affects choroidal vasculature and the photoreceptors; retinitis pigmentosa (RP) and glaucoma predominantly affect, respectively, the photoreceptors and ganglion cells. Damage in retinal structure can lead to retinal diseases, including AMD, DR, ROP, glaucoma, and RP. The diseases have been extensively studied by metabolomics based on LC-MS, GC-MS, and NMR.
Metabolomics is the most recently developed “omics” in the area of system biology, following genomics, transcriptomics, and proteomics. It uses nuclear magnetic resonance (NMR) or mass spectroscopy for qualitative and quantitative analysis of all small molecules in given samples, with the purpose of discovering and identifying biomarkers. The outcomes of metabolomics studies can be helpful for disease diagnosis, identification of therapeutic targets, and monitoring of disease state, rendering it a powerful tool in medicine and clinical translation. Moreover, metabolomics can provide unique insight into physiological and pathophysiological processes [3]. With expanding applications of metabolomics, research into the metabolic bases of ocular diseases has been increasing [4][5]. This article provides a review of recent findings in metabolomics studies of retinal disease, with a focus on metabolome of clinical samples, and using AMD, diabetic retinopathy (DR), retinitis pigmentosa (RP), retinopathy of prematurity (ROP), and glaucoma as illustrative examples (Figure 1).
Relevant literature was obtained by searching PubMed/MEDLINE database from 1999 to July 2021. The search terms included “retinal disease”, “age-related macular degeneration”, “diabetic retinopathy”, “retinitis pigmentosa”, “retinopathy of prematurity”, “glaucoma”, “metabolomics”, “metabonomics”, and “metabolic profiling”. The above keywords were combined with “OR”/“AND” operators for searching titles and abstracts. The search results were imported into Endnote for management and removal of duplicated literature. A total of 280 abstracts were reviewed and, among these, 110 relevant articles were retrieved for comprehensive evaluation.

It is well known that the retina is one of the most metabolically activity tissues in the body. Metabolic dysfunction can cause a number of retinal diseases, compromising vision to the extent that blindness can occur. Some retinal diseases, like AMD, are asymptomatic at the early stage, which means that diagnosis occurs only when the features of relatively late-stage AMD are present, with associated impairment of vision. Moreover, the pathogeneses underlying retinal diseases are yet to be comprehensively elucidated. Metabolomics is a powerful tool that has great potential for enhancing the understanding of pathological mechanisms and molecular processes, discovering new pathways, and identifying biomarkers for diagnosis and prognosis, thus offering support in personalized ophthalmology. In this section, we review and discuss recent progress in metabolomics investigations of several common retinal disorders, including AMD, DR, RP, ROP, and glaucoma.