Submitted Successfully!
Thank you for your contribution! You can also upload a video entry related to this topic through the link below:
https://encyclopedia.pub/user/video_add?id=15670
Check Note
2000/2000
Chemistry and Biosynthesis of Apigenin
Edit
Upload a video
This entry is adapted from 10.3390/antiox10101643

Apigenin, a natural bioactive flavonoid widely present in medicinal plants, functional foods, vegetables and fruits, exerts protective effects in models of neurological disorders and cardiovascular diseases and most of these effects are attributed to its antioxidant action.

Public-health-related chronic diseases, such as diabetes, cancer, depression, hypertension, stroke, Alzheimer’s disease and metabolic syndrome are prevalent worldwide. Both healthy diet and physical activities can combat or delay these diseases [1][2][3]. A major contribution to the healthy diet is provided by fruits and vegetables, which are rich in natural bioactive chemical compounds. Phytochemicals are a vital part of a healthy diet and have been shown to play a predominant role in combating these chronic diseases. There are numerous phytochemical compounds, such as polyphenols, alkaloids, tannins and glycosides, which have been described as having no toxicity but high therapeutic potential in several disease settings. Polyphenols are the largest contributing group within natural product compounds consisting of subgroups such as flavonoids, flavanones, isoflavonoids, flavones and flavanols [1][4][5][6][7].
Flavonoids are the secondary metabolites which have widespread metabolic functions in plants. They are widely distributed in fruits, flowers, seeds, vegetables and in both legumes and non-legume plants. More than 6000 flavonoid compounds have been isolated and investigated for different biological purposes and the number is constantly increasing. They are known to have diverse pharmacological activities, acting as anticancer, antioxidant and anti-inflammatory agents, and also inhibiting platelet aggregation and viral replication [6][7][8].
Moreover, several studies have indicated that the consumption of dietary flavonoids can be associated with a reduced risk of metabolic syndrome. Metabolic syndrome is considered to be a worldwide epidemic complex disorder that is defined by a cluster of interconnected factors that are able to significantly augment the risk of several cardiovascular diseases (CVD), including coronary heart disease (CHD), atherosclerosis and diabetes mellitus type 2 [9]. Thanks to their antioxidative and anti-inflammatory effects, flavonoids have been widely studied for the prevention and/or amelioration of metabolic syndrome and its related disorders. However, the beneficial effects of flavonoids need to be corroborated, also contextualizing their effects with the different individual risk factors associated with metabolic syndrome, as well as the different effects of flavonoids and their metabolites on the body [10].
Among the flavonoids, apigenin is one of the most investigated and isolated compounds in human health. It is abundant in plants such as parsley, onion, oranges, chamomile, celery, spices and honey and some plant-origin beverages such as wine, tea and beer. Diverse biological effects of apigenin have been reported in both in vitro and in vivo studies and several studies revealed that apigenin could display anti-inflammatory, antioxidant and anti-obesity actions, as well as antiproliferative and anticancer activities [11][12][13]. On the other hand, emerging evidence established a potential interaction between apigenin and human gut microbiota, which contains enzymes that could degrade apigenin; this is of particular interest in the context of metabolic disorders, since, as revealed by several studies conducted on humans and animal models, gut microbiota may exert a strong influence in the pathogenesis of metabolic syndrome. Accordingly, an imbalance between gut microbes and the host’s immune system could induce “metabolic endotoxemia”, leading to systemic inflammation and insulin resistance [14]. The intense investigation carried out over the last twenty years regarding the possibility of manipulating gut microbiota through dietary polyphenols for preventing metabolic disorders suggests that apigenin can also play a beneficial role. To date, although the potential activity of dietary apigenin for the modulation of the colonic microbial population composition or activity is still limited, some studies demonstrated that apigenin can affect both the growth and gene expression of selective gut bacteria strains, paving the way for further investigation [15][16].

2. Chemistry and Biosynthesis of Apigenin

Apigenin is a natural bioactive flavonoid. Chemically, it is 4′,5,7-trihydroxyflavone (Figure 1) and is basically related to flavone, a subclass of flavonoids [17]. Apigenin is widely distributed in the plant kingdom, and is found in vegetables such as onions and parsley, fruits such as oranges and grape fruits and plant-derived beverages such as wine and tea. Apigenin is richly found in the plant species belonging to family Achillea, Sideritis, Fabaceae, Asteraceae, Teucrium, Genista, Artemisia, Matricaria and Lamiaceae [18][19][20][21][22]. 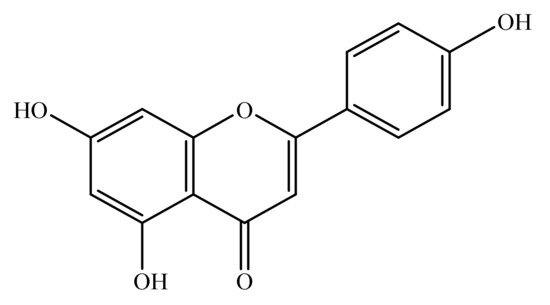 Figure 1. Chemical structure of apigenin (4′,5,7-trihydroxyflavone).
Apigenin is synthesized biogenetically by the phenylpropanoid pathway. It is synthesized from tyrosine and phenylalanine precursors. Tyrosine is directly deaminated to p-coumaric acid while phenylalanine is converted into cinnamic acid via non-oxidative deamination which is further oxidized at C-4 and then converted into p-coumaric acid. After the synthesis of p-coumaric acid by both pathways, the synthesized p-coumaric acid is further activated with Coenzyme-A. Three molecules of malonyl-CoA are then condensed with the p-coumarate. The compound is then aromatized to chalcone by chalcone synthase. Chalcone isomerase then isomerizes the chalcone and converts it into naringenin. In the final step, naringenin is oxidized into apigenin by flavanone synthase. The biosynthesis of apigenin is summarized in Figure 2 [1][23][24][25]. 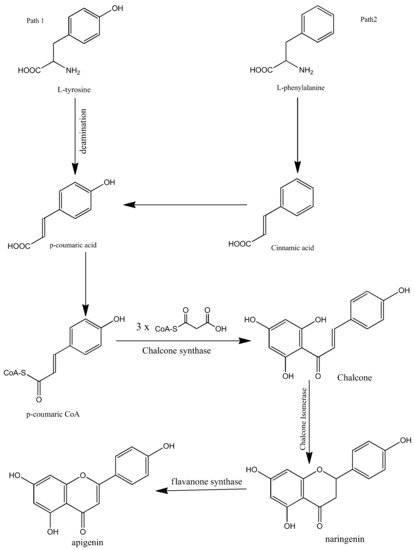 Apigenin is characterized by poor systemic availability, due to its low lipid and water solubility; it is either excreted unabsorbed in the urine or faeces or rapidly metabolized after absorption [16].

Absorption of apigenin takes place throughout the gastrointestinal (GI) tract from stomach (deglycosylated) to colon (non-deglycosylated). Apigenin is transported via active carrier transport and passive diffusion in the duodenum and jejunum, while in the ileum and colon it is transported only by passive diffusion [26][27]. It has been established by Chen et al. that systemically absorbed apigenin was in conjugated form [28]. Li et al. found that topically administered apigenin was absorbed into local skin tissues despite transdermal blood circulation [29].

The presence of apigenin was not found in the kidneys and GI lumen after 12 h of administration of apigenin glycosides (flavonoid extract). In the liver it was detected in 1.5 and 12 h [27]. Orally administered single-dose radiolabelled apigenin was detected after 10 days with radioactivity of 0.4% in kidneys, 1.2% in liver, 9.4% in intestine, 12% in faeces and 51% in urine [30]. Apigenin was also detected in human red blood cells [31].
Zhang et al. [32] (2013) indicated that apigenin binds to human serum transferrin glycoprotein at the Fe3+-binding site. Because of the high plasma binding capacity, apigenin distributes to tissues well and has a large volume of distribution in vivo [33].

Apigenin has been categorized as a class II drug with high intestinal membrane permeability and poor solubility according to the Biopharmaceutics Classification System [38]. Apigenin is poorly soluble in non-polar solvents (0.001–1.63 mg/mL), while it is soluble as more than 100 mg/mL (freely) in dimethylsulfoxide. The solubility in the phosphate buffer was 2.16 μg/mL at pH 7.5. Innovative techniques are used to enhance the bioavailability of apigenin [26][39]. For instance, carbon nanopowders with apigenin system was used and it was found that dissolution of apigenin was improved about 275% as compared to pure apigenin in 60 min, resulting in an increase of apigenin bioavailability of 183% [40]. In vitro assays reported that apigenin nanocrystals have faster dissolution velocity than coarse powder. These are prepared by a supercritical antisolvent process [41].

More
© Text is available under the terms and conditions of the Creative Commons Attribution (CC BY) license (http://creativecommons.org/licenses/by/4.0/)
Upload a video for this entry
Information
Subjects: Biology
Contributor MDPI registered users' name will be linked to their SciProfiles pages. To register with us, please refer to https://encyclopedia.pub/register :
Carmine Rocca
View Times: 34
Revisions: 2 times (View History)
Update Time: 05 Nov 2021
Table of Contents
1000/1000
Hot Most Recent