Submitted Successfully!
Thank you for your contribution! You can also upload a video entry related to this topic through the link below:
https://encyclopedia.pub/user/video_add?id=15609
Check Note
2000/2000
Wireless Sensor Networks
Edit
This entry is adapted from 10.3390/electronics10212625

Wireless sensor networks (WSNs) are spatially scattered networks equipped with an extensive number of nodes to check and record different ecological states such as humidity, temperature, pressure, and lightning states. WSN network provides different services to a client such as monitoring, detection, and runtime decision-making against events occurrence.

Mostly there are two kinds of networks, wired and wireless. The wireless sensor network (WSN) is the most used network for the connectivity of devices and communication. The WSN network is applied in many daily-based applications such as environment monitoring where humans cannot reach, health monitoring of patients using the WSN, industrial monitoring, and air pollution monitoring. WSN spatially scattered sensor networks interconnect with sensed data in these situations. Regardless of the various uses of WSN network and privilege of easy connectivity of devices, the network has some limitations such as data processing sensed by the sensors deployed in the environment, temporary storage of data when a large number of sensors are deployed in the environment, tools and software use, low battery power of sensors, and sensor’s integration in a single platform. Additionally, the WSN middleware applications are to address the gap around high-level specifications. Several other problems need to be addressed for applications and the difficulty of the operations in the underlying network. Due to these limitations with the WSN network the cloud computing (CC) plays a significant role in the network. The integration of WSNs and clouds can also be used in a large number of applications such as transportation, war zones, health, and agriculture [1][2]. Disaster surveillance is another region, in which sensor nodes can be used to recognize the tragedy by exact investigated points, to decrease the causality and damage of property. Cloud computing has a slightly positive impact on WSN in the following ways: integration of sensors, ease of storage of data on the cloud, ease of data processing, easy accessibility of tools in different WSN environments, load balancing of a network by the CC, and CC need for WSN to develop other similar computing models due to its low cost. All of the WSN network limitations can be overcome by the CC placement. The WSN with cloud integration is shown in Figure 1 . The emergence of WSN and cloud computing services has introduced significant sensor-cloud integration opportunities that will make it easier for users not only to track their objects of concern via sensors but also to employ cloud services to evaluate future directions [3]. 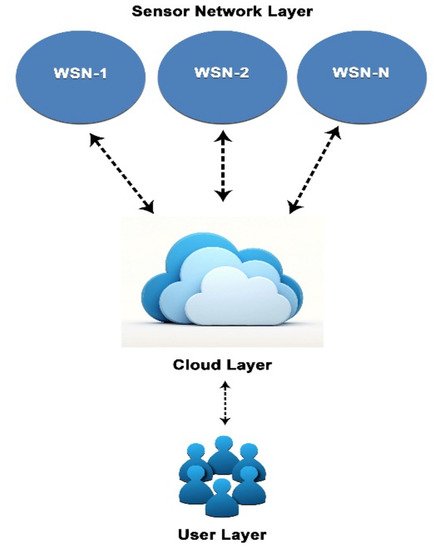 Integration of WSN with the cloud can also be achieved through FC. WSN to fog integration is shown in Figure 2 . The figure explains the concept of fog working in the WSN [4]. Different clients can use the Fog as different services for servers to perform their activities. Fog computing provides the smart data processing of WSN network sensors. For example, the goal is to reduce sending direct sensor information toward the cloud thus improving the ratio for both user data and noise [5]. Some basic information processing algorithms are introduced at the sensor stage [6][7]. Fog is a three-tier structure which is shown in Figure 3 . Fog maximizes throughput and minimizes the latency for energy saving [8][9][10]. Fog is a very flexible structure for providing services to cloud and sensing nodes [11][12][13]. 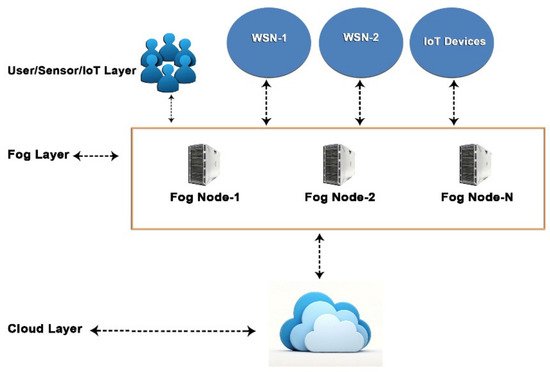 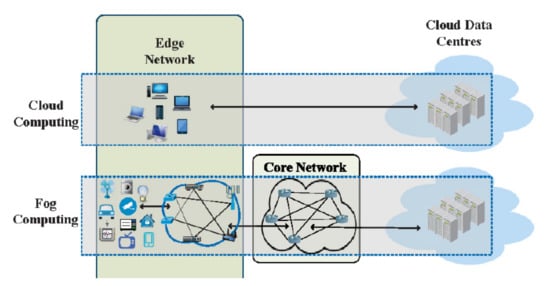 Internet usage is increasing rapidly day by day, which plays a vital role in the evolution of CC. There is a substantial shift of people to the Internet because a lot of devices are available. People can access web services from anywhere through mobile phones, laptops, and desktops. It has become an essential part of their lives [14][15]. Nowadays, the internet has become one of the biggest sources of information about education, health services, entertainment, and many other daily life issues. This is the reason that the web has modernized or started using new technology for information sharing. Over time, the vast usage of the Internet leads to the invention of new things in Internet technology. Due to innovation on the internet, CC is emerging rapidly. CC is a prominent emerging technology of the present day that has its roots back in the 1950s when mainframe computers came into the information technology (IT) industry. Mainframe computers caused the birth of the cloud by going through enterprise transformation. The cost of a mainframe computer was so high that companies were not financially strong enough to buy the standalone device. Multiple users and companies used to share mainframe devices. In this way, the concept of shared resources took place in the information technology industry, in which multiple companies were using the same mainframe device through terminals to save cost. Through the concept of shared resources, cost-saving was the biggest advantage of that time and motivated the researchers and IT people to start thinking about it [16][17]. In the 1970s, a virtual machine (VM) having an operating system was launched by International Business machines (IBM) that presented the concept of visualization in computing. More than one operating system could be run simultaneously on one machine. In this concept, more than one operating system that can be named as the guest operating system runs on the same machine for sharing resources. At this point, resource sharing was one more feature that motivated the researcher to do work and introduced the new things in this field for better utilization of resources by saving cost and time [18][19].

3. Resource Scheduling for WSN with Cloud and Fog

FC brings organized resources close to the fundamental systems. FC expands the conventional CC worldview to the edge of the system to empower, refine, and for better applications or services. FC is a virtualized stage, which gives calculation, storing, and organizing services between the end nodes in IoT and traditional clouds [20].
With an expanding number of heterogeneous devices associated with IoT and creating information, it will be inconceivable for an independent IoT to effectively perform power and data transmission. IoT and distributed computing integration have been imagined to secure the data of the cloud [21], a circumstance when the cloud is associated with an IoT that produces interactive media information. Visual sensor networks (VSN) or closed-circuit television (CCTV) associated with the cloud can be cases of such a situation. Since interactive media content expends additional preparing power, storage room, and resource requirements, services in the cloud will unavoidable. Fog processing assumes an exceptionally fundamental part of the cloud [22].
Fog is actualized near the end clients. In this manner, FC gives a better nature of services in terms of system data transmission, control, utilization, throughput, and response time and it lessens the movement over the web. There are numerous resource assignment systems in CC. System resource allocation methodologies and how these techniques can be actualized in CC conditions are discussed in the study [23]. There are many planned calculations for resource provisioning. However, there is a need for a powerful resource provisioning methodology keeping in mind that the end goal is to satisfy the request of clients and limit the general cost for the clients and additionally for cloud servers. The primary target of resource provisioning calculation is to plan the virtual machines (VMs) on the server. There is little study on upgraded resource planning calculation, resource provisioning technique of the market planning with numerous Service Level Agreement (SLA) parameters, resource allotment control-based show, adaptable resource provisioning, blockage control resource allotment model and ask for forecast demonstrate.
Researchers have concentrated on two issues, provisioning and resource allocation in distributed computing [24]. First is the Hadoop Map Reduce (HMR) and its schedules, the second reservation issue is provisioning virtual machines to resources in the cloud. MapReduce is a programming model for the preparation of vast scale information and was initially created by Google and Hadoop given the execution of Map Reduce. There are three schedulers accessible: First In First Out (FIFO), reasonable scheduler, and limit scheduler. The second planning issue is the provisioning of VMs and the task of VMs on physical machines. Resource sharing planning is a fundamental issue in CC. Cloud service gives virtual resources to the effective framework.
There is an essential connection between the framework segment and its capacity utilization for execution in cloud conditions [25]. The energy utilization examination of cloud groups with the assistance of cloud group nodes has been proposed. Level 1: virtualization and physically, layer 2: fog sensors, servers, and gateways, level 3: supervision, levels 4: preprocessing and post-processing, level 5: storage and resource managing, level 6: safety, and level 7: applications are multiplatform of the fog computing standard architecture. All the above levels are displayed in Figure 4 as a multilayered fog architecture. These fog architecture levels are divided into categories according to the applications they are used for. The significance of each level is examined, as well as its applicability in diverse applications. The purpose of these levels will be to collaborate to transmit a task from an IoT to a fog node and finally to the cloud for accomplishment [26]. 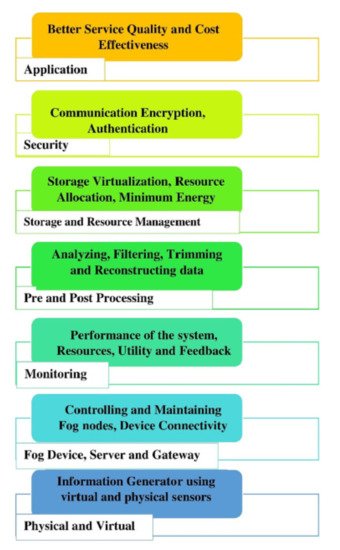