Submitted Successfully!
Thank you for your contribution! You can also upload a video entry related to this topic through the link below:
https://encyclopedia.pub/user/video_add?id=15578
Check Note
2000/2000
Heart Failure in Patients with Arrhythmogenic Cardiomyopathy
Edit
Upload a video
This entry is adapted from 10.3390/jcm10204782

Arrhythmogenic cardiomyopathy (ACM) is a familial heart disease with a prevalence of approximately 1:5000 [1][2][3]. The disease is a major cause of sudden cardiac death (SCD) in adolescents and young adults, especially during athletic activity. With the establishment of clinical risk prediction models and the use of implantable cardioverter-defibrillators (ICD) in high-risk patients, the incidence of malignant arrhythmic events has gradually reduced [4][5][6][7][8]. ACM is known to be a progressive disease, and with advanced right ventricular (RV) involvement and/or left ventricular (LV) involvement, symptoms and signs of heart failure (HF) may occur during later stages of disease. Despite the fact that the focus in ACM was on arrhythmias in earlier studies, various HF phenotypes have received attention more recently.

The prevalence and severity of progressive HF in ACM have been somewhat controversial, as the epidemiological and clinical characteristics of the disease varied greatly among reports from different centers [9][10][11][12]. In many retrospective clinical studies, HF was reported to be rare and often related to later stages of disease [13][14]. On the other hand, HF was also reported to be an early, and even first, manifestation of disease in other studies. In particular, it has even been recognized as one of the main causes for cardiac death and heart transplantation (HTx) [10][12].

The HF course of ACM is unique from other cardiac diseases, such as dilated cardiomyopathy and hypertrophic cardiomyopathy, which are more common causes for severe HF related adverse outcomes. The sequence and origin of HF symptoms in ACM is quite distinctive. The symptoms of HF often appear after the stage of electrophysiological disorder and originate from the right side pulmonary circulatory system in ACM. The severity of ACM has gender specificity and age differences, which could lead to different risk stratification from other cardiomyopathies. Apart from that, the genotype and exercise could also affect the HF progression in ACM, which requires a more specific prevention and treatment strategy in its clinical management.

In this entry, in order to provide a more comprehensive understanding of clinical phenotypes and management strategies, we report the prevalence, clinical course, risk stratification, prevention and treatment strategies of HF in ACM patients. Moreover, we propose our view of prospective research directions in this field.

2. Prevalence of HF in ACM

Progressive disease and occurrence of HF was described in various ACM registries across different ethnic backgrounds. HF has been reported from all ACM cohorts across the globe ( Figure 1 ). However, the prevalence of HF in this disease was reported differently in different centers because of the lack of consensus on the definition of HF and due to different inclusion methods. The clinical diagnosis of HF was mainly based on a combination of the American College of Cardiology/American Heart Association HF staging system and physician experience in different registries. The incidence of HF was reported to be in the range of 5% (defined by volume overload) to 49% (defined by the clinical symptoms and the severity of ventricular remodeling in echocardiogram or cardiac MRI imagines) among different centers and studies [10][15]. In the clinical reports from studies which only include the ACM probands, the incidence of HF was higher compared to some others which also enrolled their at-risk relatives. The incidence of HF in ACM was reported to be around 0.5% annually in primary care hospitals, which was much lower than that reported by tertiary care centers [16]. The causes of this difference may mainly derive from the unavoidable selection bias of the ACM population, in that patients with advanced HF were more likely treated in tertiary hospitals. 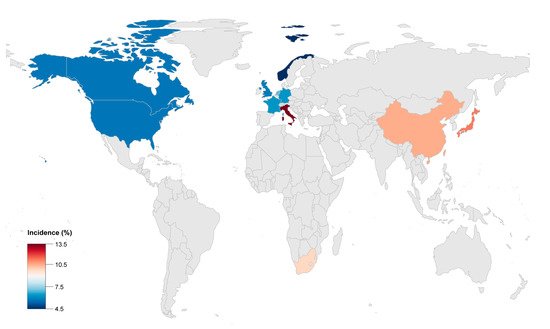 Figure 1. The incidence of heart transplantation/death reported from the ACM registry in different countries worldwide.

The global incidence of adverse outcomes, including HTx and cardiac death caused by HF in ACM, was reported to be 2 to 22% ( Table 1 ). Advanced HF in ACM was more common in Asia and could cause a poorer prognosis compared with Europe or America. The ACM patients from China or Japan had higher risk for HF related rehospitalization, heart transplantation and death. This could possibly be caused by the different proportion of certain gene mutations, such as plakophilin 2 ( PKP2 ) and Desmoglein 2 ( DSG2 ).

The clinical course of HF in ACM was reported to be heterogeneous. Some ACM patients reached the endpoint of cardiac death or HTx within 2 or 3 years, while these occurred after a few decades in some patients [15][29][30]. The description of HF ’s course in ACM was limited in most studies and the potential relationship between HF and ventricular arrhythmias was incompletely described [38].

The ARVC patients could have a typical phenotype with both structural abnormalities and electrophysiological disorders, which are often reflected on the results of imaging and ECG tests. The typical CMR and ECG characteristics of ACM HF patients are provided in Figure 2 . 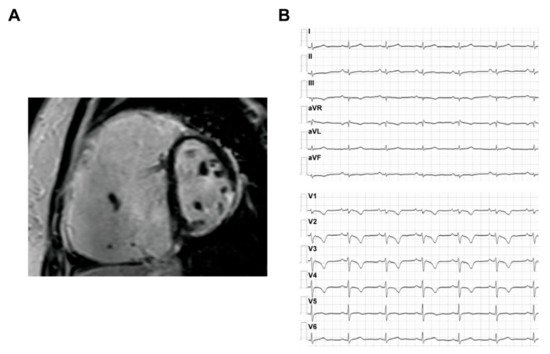 In a proteome study, heat shock protein 70 (HSP70) was significantly elevated in both ACM and other cardiomyopathies [40]. Furthermore, bridging integrator 1 (BIN1) [41][42], ST2 [43] and galectin-3 (GAL-3) [44] can reflect the severity of HF in ACM. The circulation level of complements is also correlated with mortality and cardiac dysfunction in ACM [45]. The sC5b6 level could display the severity of HF, which is significantly higher in ACM patients with biventricular dysfunction compared with isolated RV dysfunction. As is well-known, the abnormality of lipid metabolism is one of the key pathogenesis for ACM progression. The oxidized low-density lipoprotein (ox-LDL) could not only reflect the severity of ACM fat infiltration, but also predict the HF and malignant arrhythmia’s event risk. Another specific plasma biomarker for ACM clinical course discrimination and cardiac function prediction is β-hydroxybutyrate (β-OHB). In the report from Fuwai Hospital, the level of β-OHB is relatively low in healthy volunteers and unsuspected relatives of ACM patients. However, it is gradually increased in ACM patients following the clinical heart failure stage from normal cardiac function to isolated RV dysfunction and biventricular cardiac dysfunction. It could be recognized as a useful predictor for disease progression and adverse heart failure outcomes.

The hearts from orthotopic HTx and/or autopsies in ACM patients had distinctive histopathological features as compared to other cardiomyopathies. The typical gross morphology and histopathological characteristics of ARVC HF patients are provided in Figure 3 . 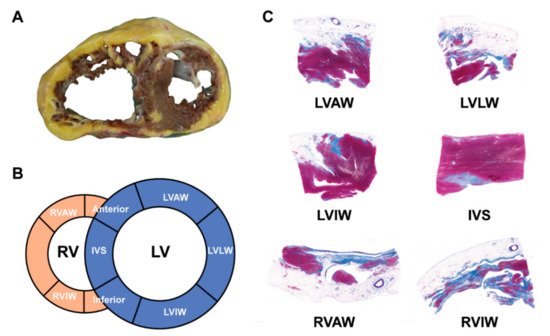 The average age of onset for ACM is 30–40. It is widely accepted that early-onset of HF often indicates more rapid occurrence of adverse outcomes. On the other hand, in a small cohort with young ACM patients under 18 years and with long-term follow-up, the incidence of adverse HF outcomes was similar in children and adults [26]. In the report from the Nordic ACM Registry, an age of disease onset under 35 years was shown to be an independent risk factor for HTx [30]. In contrast, older patients with late presentation of ACM, who were thought to be more vulnerable, had less risk of cardiac death and HTx than younger patients [29].

There is widespread consensus that family history is an important risk factor for ventricular arrhythmic events in ACM patients. ACM probands who had symptomatic relatives have a higher possibility for carrying desmosomal mutation and a higher risk of SCD [46]. With respect to the risk of HF, however, most reports showed that familial or isolated ACM probands had the same risk of developing HF [14][19][30]. Meanwhile, no evidence showed that ethnic background could affect the HF risk in ACM patients [10].

Arrhythmias may occur at any stage of ACM, and over 90% of patients had an initial manifestation or the history of VT, atrial arrhythmia or aborted SCD [13][47][48]. Many studies demonstrated the critical role of arrhythmias in the progression of HF. Theoretically, patients with recurrent VT and atrial arrhythmias tended to have worse hemodynamics features and pump dysfunction [23][32][38]. However, there was no evidence suggesting that VT is a risk factor for HF progression. In addition, the right bundle branch block (RBBB) was reported to have a significant correlation with severe biventricular HF [17]. The development of complete RBBB may lead to poor prognosis [49].

Several studies focused on the characteristics of atrial arrhythmias in ACM and found that these arrhythmias may be common, with a prevalence of about 10–20% in the general ACM population [19][30][38]. The incidence of atrial fibrillation in patients with adverse HF outcomes was 6–19% [30]. Atrial arrhythmias were associated with increasing mortality and morbidity and appeared to be risk factors for HTx and deaths due to end-stage HF. In addition, the incidence of first-degree atrioventricular block may be significantly higher in patients with rehospitalization for HF, and it was shown to be an independent risk factor for HF hospitalization in ACM [50].

More
© Text is available under the terms and conditions of the Creative Commons Attribution (CC BY) license (http://creativecommons.org/licenses/by/4.0/)
Upload a video for this entry
Information
Subjects: Cardiac & Cardiovascular Systems
Contributor MDPI registered users' name will be linked to their SciProfiles pages. To register with us, please refer to https://encyclopedia.pub/register :
Shi Chen
View Times: 43
Revisions: 2 times (View History)
Update Time: 01 Nov 2021
Table of Contents
1000/1000
Hot Most Recent