Submitted Successfully!
Thank you for your contribution! You can also upload a video entry related to this topic through the link below:
https://encyclopedia.pub/user/video_add?id=15441
Check Note
2000/2000
Probiotic Supplements
Edit
Upload a video
This entry is adapted from 10.3390/ijms222011290

Probiotics are as ancient as human history; they were discovered in ancient, fermented food. The word probiotic originally belongs to the old Greek language (ρo-βio), which refers to ‘for life’. Most probiotics belong to Gram-positive bacteria (Lactobacilli and Bifidobacteria).

1. Probiotics and Their Health Benefits

Probiotics are as ancient as human history; they were discovered in ancient, fermented food. The word probiotic originally belongs to the old Greek language (ρo-βio), which refers to ‘for life’. Most probiotics belong to Gram-positive bacteria (Lactobacilli and Bifidobacteria). Bacillus coagulans, Streptococcus thermophilus, a strain of Gram-negative bacteria Escherichia coli Nissle 1917, and the yeast Saccharomyces boulardii are some additional well-known probiotics [1], though additional species and genera are being evaluated for future use. Probiotics are considered as a part of the gut microbiome that constitutes 1 to 3% of body mass, commensals gut bacteria are also helpful organisms that naturally exist in the gut microbiome and help to keep the host environment healthy [2]. Nonetheless, commensals and probiotics play important roles in digestive and immune health [3], including nutrient and vitamin synthesis, host food product metabolism, intestinal barrier strengthening, pathogenic microbe colonization prevention, anti-inflammatory, and immunoregulation [4][5][6]. Both have therapeutic potential, but we concentrated on the therapeutic benefits of probiotic bacteria in our review.
Probiotics are the most crucial part of the gut microflora. When administered in sufficient numbers, probiotics colonize different positions in the colon, producing nutrients and energy by fermenting resistant-digestible dietary elements and conferring health advantages to the host, while preserving the homeostasis of the gut microflora [7][8]. As is well known, probiotics are imperative for regulating metabolism, stimulating the immune system against potential infection sources, and preventing chronic diseases [9]. However, factors, such as age, lifestyle, diet, diseases, medicines, and antibiotics, lead to gut dysbiosis. As shown in Figure 1, dysbiosis is the opposite of homeostasis, leading to increased risk factors concerning bacterial and viral infections and chronic diseases [10]. Therefore, maintaining an adequate level of biodiversity is critical for gastrointestinal health. 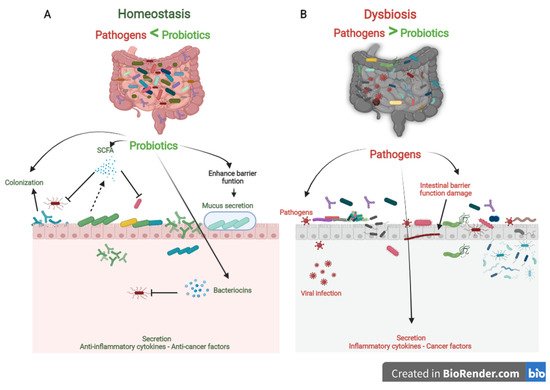 Figure 1. The role of probiotics in competitive exclusion of pathogens. (A) Gut microbiota homeostasis refers to probiotics that colonize intestinal epithelial cells. Probiotics produce SCFAs and bacteriocins that prevent viral infection and other pathogens. In addition, probiotics boost anti-inflammatory cytokines and anticancer factors, which prevent the development of chronic diseases. (B) In contrast, gut microbiota dysbiosis refers to a decrease in microbial diversity caused by the loss of beneficial bacteria and an increase in pathogen microbiome, which is linked to an increased risk of chronic diseases and viral infections.
Probiotics play a vital role in maintaining biodiversity homeostasis in the gut (Figure 1). They compete with pathogens on receptor sites and nutrients in the gut tract, consequently improving gut health and synthesizing different bioactive components, e.g., vitamin B, short-chain fatty acids, bacteriocins [11]. Furthermore, probiotics have their own antiviral, anticarcinogenic, and anti-inflammation effects [12][13]. In addition, probiotics can regulate bowel motion [14], improve cardiovascular functions, and enhance the host’s immune role [15].

2. Probiotics and Competitive Exclusion of Pathogens

The human gut is a complicated ecosystem responsible for a wide range of important biological activities [16]. This ecosystem involves more than 400 anaerobic and aerobic microorganism species, both beneficial and pathogenic, and they are directly affected by the different physiological conditions [17]. The large intestine is considered the final station for this microbiota [18]. Beneficial microbiota and pathogens compete for nutrients, colonize the gut epithelium, and secrete their metabolism products. Probiotics effectively preserve gut microbiota homeostasis by competitive exclusion of pathogenic bacteria. In contrast, if there is a change in the microbial composition that causes an extreme imbalance between the beneficial and potentially pathogenic microorganisms, the gut becomes exposed to colonization of pathogenic with gut microbial changes [19]. So, competitive exclusion refers to a condition in which one species of microorganism competes more strongly than another for receptor sites in the intestinal tract [11][20].
Three steps can be mainly described as the competitive mechanisms of probiotics. First, colonization of probiotics into the gut epithelium prevents the fixation of pathogenic bacteria in the gut epithelium. Then, competition for essential nutrients prevents pathogenic microorganisms from obtaining the necessary energy to grow and increase in the gut. Finally, their metabolism products (mucus, bacteriocins, hydrogen peroxide, organic acids, and short-chain fatty acids) may inhibit pathogens (Figure 1). Colonization of probiotics for the mucosal surface area in the human intestinal tract creates a barrier to pathogen growth. Probiotics ably compete with pathogens on epithelial link positions, blocking the intestinal colonization by pathogens, including Helicobacter, Clostridium difficile, Clostridium histolyticum, Listeria monocytogenes, Salmonella Choleraesuis, Staphylococcus aureus, and some strains of E. coli and rotaviruses [21].
Recent studies found a remarkable improvement in the balance of gut microbiota, intestinal cell proliferation, and recovered immune response in children fed with probiotics [22][23]. In addition, probiotic therapies have been shown to reduce the severity of necrotizing enterocolitis, Whipple’s disease, nosocomial and diarrhea, colic, and allergies in several clinical studies [22][24]. The development of those diseases is associated with pathogens.
Probiotics produce a variety of bacteriocins, such as nisin, lactococcin (A, B, Z, G, and Q), pediocin, acidocin, enterocin, enterolysin, and lysostaphin. Bacteriocins are small cationic molecules consisting of 30 to 60 amino acids [25]. These substances have a significant antibiotic and antiviral effect that protects the host from pathogens. Bacteriocins act on the pathogen cytoplasmic layers and target active layer vesicles to damage the proton-motive force and inhibit pathogen replication [11]. Lactococcin (A, B, Z, G, and Q) produced by Lactococcus lactis subsp. can increase the permeability of microbial cells by recognizing specific sites in the mannose phosphotransferase system of the responsive cell. Different strains of Lactococcus lactis subsp. lactis and Streptococcus brevis essentially secrete nisin as abundant as an antibiotic used against a wide range of pathogens [26]. Pediocin, acidocin, enterocin, enterolysin, and lysostaphin released by probiotics powerfully combine with the cell pathogen surface, inhibiting protein synthesis by stopping DNA transcription [25].
On the other hand, short-chain fatty acids (SCFAs) are among the essential postbiotic substances produced during probiotic fermentation of soluble dietary fiber in the human colon. SCFAs are small acid molecules consisting of 2 to 4 carbon atoms in the aliphatic tail, and the most copious in the gut are acetate, propionate, and butyrate. These acids play a pivotal role in gut homeostasis and the competitive exclusion of pathogens. Butyrate in particular, is an essential energy source for the growth and proliferation of epithelial cells. Furthermore, SCFAs have been shown to bestow anti-inflammatory features and immune-strengthening properties and increase antibiotics and antiviral yields [27].

The immune system defends the human body against enemies, such as viruses, bacteria, fungi, foreign matters, and tumor etiology. Generally, the immune system is shaped by two parts: the innate (general) and adaptive (specialized) systems. B and T lymphocytes make up the adaptive immune response, which is related to antigens and antibodies. At the same time, the innate immune system arises when a person is born, which responds to familiar structures called pathogen-associated molecular originals shared by most pathogens [28][29]. The immune system’s integrity is closely related to gut health. A healthier gut confers approximately 25% of the body’s immunity [30]. Gut-associated lymphoid tissues (GALT) make up the most significant part of the innate immune system in the body. GALT consists of functional regions, such as Peyer’s patches, multiple lymphoid follicles surrounded by the mucosa-associated lymphoid tissues (M-cells). Essentially, M-cells are responsible for migrating antigens and microorganisms, including probiotics, from the intestinal lumen to Peyer’s patches through pattern recognition receptors, called Toll-like receptors (TLR). Probiotics, passing through Peyer’s patches, bestow various beneficial impacts on the epithelial layer, contributing to keeping the host’s gut healthier (Figure 2) [31]. 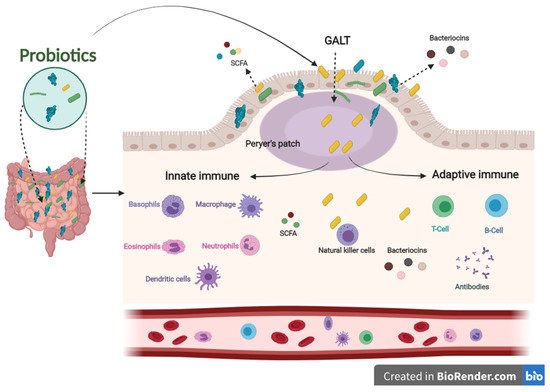 Figure 2. The influence of innate and adaptive immune responses by probiotics. When probiotics travel through Peyer’s patches, lead to an enhanced role of the immune system related to producing antigens and antibodies.
Concerning the role of probiotics in improving the immune system, several pieces of literature have been published in this regard. Among these studies, Sierra and co-workers have shown that supplementation of Lactobacillus salivarius CECT5713 in the adult diet enhances immune responses by increasing NK, monocytes, immunoglobulins, and IL-10 cytokines in the plasma [32]. Furthermore, the daily intake of a drink containing Lactobacillus casei Shirota improved the expression of the CD69 activation marker T cells and NK cells. In addition, it increased the levels of mucosal salivary IFN-γ, IgA1, and IgA2 in healthy adults [33]. Lactobacillus gasseri TMC0356 decreases CD28 expression in CD8+ T cells. In contrast, it induces an increase in the number of CD8+ T cells of the elderly [34].
In addition, regular intake of Bifidobacterium lactis HN019 promotes NK and PMN capacity in the elderly [35]. Two new Lactobacillus strains (s193 and s292) isolated from Funazushi (a traditional Japanese fermented food) increase beta-8-integrin on mesenchymal DCs, which are fully activated CD4+ T cells that become Treg cells [36].
In addition, postbiotics derived from probiotics contribute to improving the immune system. SCFAs and bacteriocins can directly or indirectly affect the immune system’s capacity against various diseases [37]. SCFAs and bacteriocins are known to stimulate the immune functions of goblet cells. Goblet cells play an important role in barrier restoration by producing mucus and enhancing innate immunity by releasing a variety of influential agents, such as antibiotics, chemokines, and cytokines [38][39]. Those effective agents induce innate immune responses against infections. Similar to the innate immune system, postbiotics have also been confirmed to enhance antibody-specific immunoglobulin and macrophages, dendritic cells, and T cells by boosting the adaptive immune system functions against invaders [40][41]. The results mentioned above indicate that probiotics have an influential role in modulating and stimulating immunological responses to prevent different pathogenic strains, making them a promising therapy for this concern (Figure 2).

More
© Text is available under the terms and conditions of the Creative Commons Attribution (CC BY) license (http://creativecommons.org/licenses/by/4.0/)
Upload a video for this entry
Information
Subjects: Food Science & Technology
Contributor MDPI registered users' name will be linked to their SciProfiles pages. To register with us, please refer to https://encyclopedia.pub/register :
Mahmoud Youssef
View Times: 78
Revisions: 2 times (View History)
Update Time: 31 Oct 2021
Table of Contents
1000/1000
Hot Most Recent