Submitted Successfully!
Thank you for your contribution! You can also upload a video entry related to this topic through the link below:
https://encyclopedia.pub/user/video_add?id=15424
Check Note
2000/2000
MEIS1 in Hematopoiesis and Cancer
Edit
Upload a video
This entry is adapted from 10.3390/jdb9040044

MEIS1 is highly expressed in the bone marrow, and its predominant and better-known role is in embryonic and adult hematopoiesis. Along withPBX1 and HOXA9, MEIS1 is expressed in hematopoietic stem cells (HSCs) but downregulated during their differentiation.

Homeobox transcription factor MEIS1 belongs to the three-amino acids loop extension (TALE) sub-family of homeobox proteins. MEIS1 was discovered because a retroviral integration close to its regulatory region induced murine myeloid leukemia[1]. Since then, the roles of MEIS1 in development, cell regulation, and transformation have been extensively investigated. MEIS1 is highly expressed in the bone marrow, and its predominant and better-known role is in embryonic and adult hematopoiesis[2][3][4][5]. Along with PBX1 and HOXA9 , MEIS1 is expressed in hematopoietic stem cells but downregulated during their differentiation[5][6]. MEIS1 regulates growth and differentiation during vertebrate development  and is widely expressed in the central nervous system and periphery, both during embryogenesis and after birth [3][4]. During embryo development, Meis1 ablation results in hematopoietic, vascular, and ocular defects. It has been also well defined the role of Meis1 and Meis2 in mouse axial skeleton formation[7][8][9] and in anterior-posterior patterning for limb initiation[10], for which Meis loss-of-function (Meis1 and Meis2 double knock-out) embryos are limbless, with undeveloped appendicular condensations. A direct connection between MEIS1 expression, leukemia, and cancer has been established from the start[1].

One of the properties of TALE proteins is to interact with each other. Previous studies have defined that the primary binding partner of MEIS1 is PBX (another TALE protein), of which exist four different genes[11][12]. MEIS1 and PBX form a stable heterodimer that cooperatively binds DNA[13][14]. In particular, the N-terminal domain of MEIS1, the MEINOX domain, also known as the Homology Region (HR), serves as the interaction surface with PBX. There is an additional member of the TALE family, pKNOX1, better known as PREP1 (for PBX-regulating Regulating Protein 1), which also binds DNA as heterodimer with PBX[14][15][16][17][18]. MEIS1-PBX1 and PREP1-PBX1 dimers can bind DNA and form trimeric DNA-binding complexes with HOX proteins. During embryonic stages, trimerization of MEIS1/PREP1 with PBX1 and HOXB1 is necessary to express several HOX cluster genes, playing crucial roles in development and hematopoiesis [5][19][20][22][21]. In human leukemia, the cooperation between MEIS1 and HOXA9 with PBX has been extensively reported[23][24][25][26][27]; specifically, the PBX3 form appears to be the prevalent form involved[28]. The interaction of MEIS1 and PREP1 with PBX may lead to overlapping functions as they both share their interaction and bind to DNA target sequences that are very similar, although not identical[29]. On the other hand, the two proteins may compete for PBX, and hence may have opposite functions. These possibilities have been verified: for example, in zebrafish, prep1.1 and meis1 have partially overlapping roles in hox genes regulation[22][30].  Mixed Lineage Leukemia, a leukemia due to translocation of several genes to the amino terminus of the MLL gene[30][31][32][33], appears to be mainly dependent on the overexpression of MEIS1. In PBX-MEIS1-induced human leukemia and in MEIS1-dependent mouse tumorigenesis [28][34], HOXA9 appears to have an accelerating role[35].

Like PREP1, MEIS1 requires dimerization with PBX to reach the nucleus. In MEIS1, researchers have mutated into alanine the potential hydrophobic residues corresponding to those identified in PREP1 being crucial for the interaction with PBX [36][37]: in the HR1 L83/L86/L87/I90 and in the HR2 L149/I152/L156/L159 (see Figure 1 , for a comparison of PREP1 and MEIS1 heptad repeats). 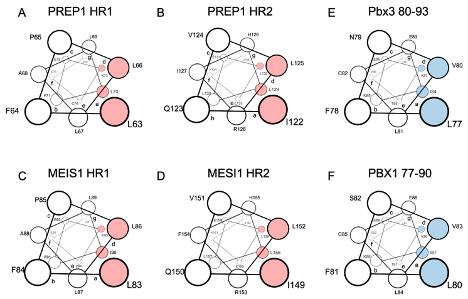 Figure 1. Schematic representation in a top view perspective of the alpha-helices of PREP1 and MEIS1 involved in the leucine zipper with PBX1. For MEIS1 and PREP1, the residues in positions “a” and “d” of the alpha helix, crucial for the interaction with PBX1, are highlighted in red for Pbx3 and PBX1; the important residues for binding MEIS1 and PREP1 are highlighted in blue. Panel (A): PREP1 HR1; panel (B): PREP1 HR2; panel (C): Meis1 HR1; panel (D): Meis1 HR2; panel (E): Pbx3 80-93; panel (F): PBX1 77-90. HR stands for “Homology Region”.

Previous research reported that the inhibition of the PBX interaction can neutralize MEIS1 oncogenic properties [28][38][39]. It has also been already described that a Meis1 mutated in its HR2 domain could not cooperate with Hoxa9 in colony-forming assays or in in vivo leukemia assays[28]. Likely, this can be explained by the inability of the Meis1 mutant to access the nucleus, as shown for the MEIS1 I149A/L152A/L156A/L159A mutant in. Indeed, pull-down experiments, have confirmed that both MEIS1 L83A/L86A/L87A/I90A and L149/ I152/L156/L159 mutants are unable to bind PBX1, as compared to wild-type MEIS1.

Transcription factor MEIS1 drives myeloid leukemogenesis in the context of HOX gene overexpression; however, MEIS1 is still considered a challenging transcription factor to target, for the absence of structural details, besides the homeodomain[40]. Nevertheless, the direct targeting of MEIS1 might provide further avenues for inhibiting the MEIS1/HOX-mediated leukemic transcription program. For example, the recent detailed knowledge of the molecular interaction between TALE oncogenic transcription factors allows the design of novel therapeutics, such as small peptide inhibitors. It would be more convenient to target MEIS1 before it reaches the nucleus, i.e., while or immediately after it has been synthesized. Newly synthesized MEIS1 or PREP1 immediately dimerizes with PBX, forming a stable complex that is then able to enter the nucleus and, in addition, acquire the ability to bind DNA. Therefore, preventing the formation of a MEIS1-PBX dimer would have a dual effect: not only the prevention of DNA binding before but also not allowing the localization of MEIS1-PBX to the nucleus. The MEIS1-PBX interaction domain was identified a long time ago, but only recently, due to its homology to the PREP1-PBX1 interaction domain, were the essential residues identified in detail.