Submitted Successfully!
Thank you for your contribution! You can also upload a video entry related to this topic through the link below:
https://encyclopedia.pub/user/video_add?id=15358
Check Note
2000/2000
Alcohol and Cancer
Edit
This entry is adapted from 10.3390/nu13093173

Approximately 4% of cases of cancer worldwide are caused by alcohol consumption. Drinking alcohol increases the risk of several cancer types, including cancers of the upper aerodigestive tract, liver, colorectum, and breast.

Approximately 4% of cancer cases worldwide are caused by alcohol consumption, equating to more than 740,000 cases of cancer globally in 2020 [1]. The impact of alcohol consumption on cancer burden differs by cancer type, and cancers of the oesophagus, liver, and breast represent the most alcohol-attributable cases of cancer globally ( Figure 1 ). Drinking alcohol even at lower levels of intake can increase the risk of cancer and we previously estimated that over 100,000 cases of cancer in 2020 were caused by light and moderate drinking of the equivalent of around one or two alcoholic drinks per day [1]. Despite this, there is low public awareness of the causal link between alcohol and cancer and alcohol use is growing in several regions of the world [2][3]. 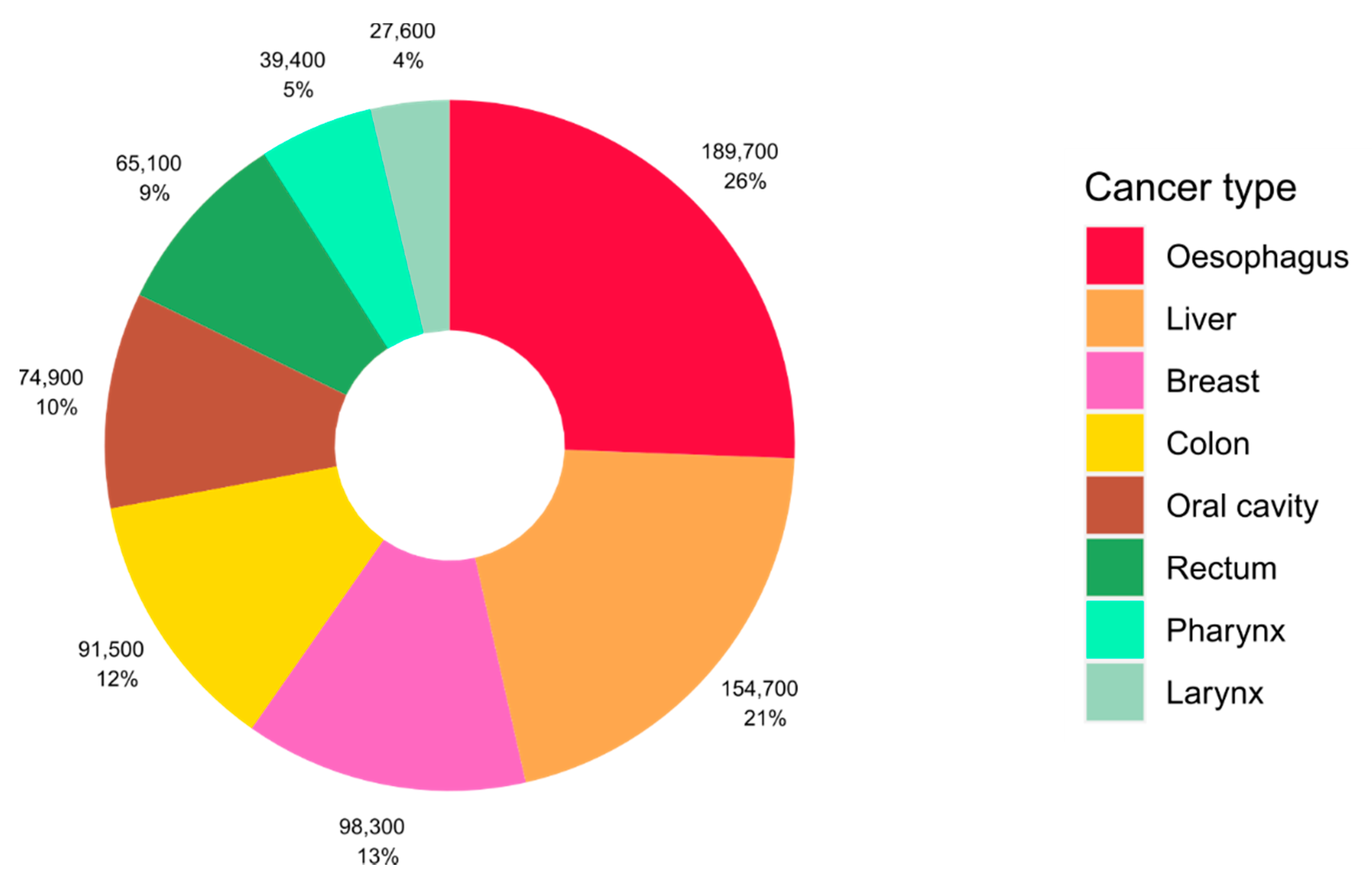 Figure 1. Global number and proportion of cancer cases attributable to alcohol consumption according to cancer type. Source of alcohol-attributable cases: Rumgay and colleagues [1].

More than 30 years ago, in 1988, the International Agency for Research on Cancer (IARC) classified alcoholic beverages as a group 1 carcinogen, the most severe classification [4]. The IARC Monographs program aims to classify cancerous agents according to the strength of the available epidemiological and experimental evidence. Cancers of the oral cavity, pharynx, larynx, oesophagus, and liver were first classified as being causally related to the consumption of alcoholic beverages, and this was expanded to include cancers of the colorectum and female breast in the later monographs on alcoholic beverages in 2010 and 2012, with a positive association observed for cancer of the pancreas [5][6].

The World Cancer Research Fund (WCRF) also conducts classification of physical and dietary components and their potential cancerous effects as part of their Continuous Update Project. The WCRF base their conclusions on the quality of epidemiological evidence and carry out meta-analyses of the association with cancer risk. In the most recent report on Diet, Nutrition, Physical Activity and Cancer, WCRF concluded that there was strong evidence that alcohol consumption increased the risk of cancers of the mouth, pharynx and larynx, oesophagus (squamous cell carcinoma), liver, colorectum, and breast (postmenopausal), with a probable increased risk of stomach cancer and premenopausal breast cancer [7].

The effects of alcohol consumption on cancer risk have been studied for many decades and an association with alcohol has been observed for multiple cancer sites. Here, we discuss evidence from large meta-analyses of observational studies and emerging evidence from Mendelian randomisation studies. Figure 2 and Figure 3 present the dose-response relationships for the risk of cancer at several sites per 10 g/day increase in alcohol consumption from the meta-analyses carried out in the WCRF Continuous Update Project [7], and the risk of cancer at several sites according to three levels of alcohol intake [light (up to 12.5 g/day), moderate (12.5 to 50 g/day), and heavy (more than 50 g/day)] from a meta-analysis conducted by Bagnardi and colleagues [8], both with respect to the reference category of alcohol non-drinkers. 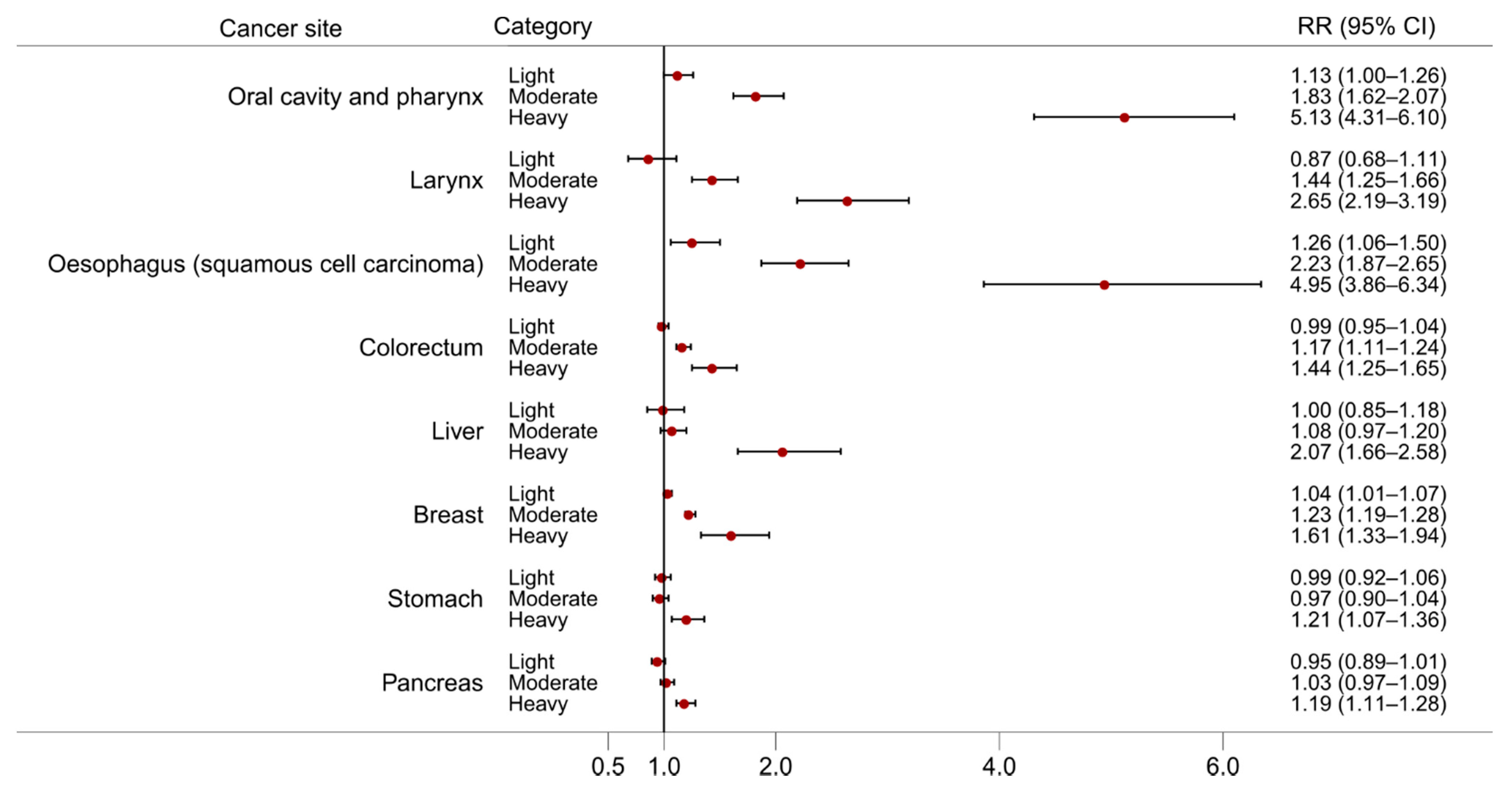 Figure 3. The dose-response relationship for the risk of cancer at different sites by three level of alcohol intake: light (up to 12.5 g/day), moderate (12.5 to 50 g/day), and heavy (more than 50 g/day). Source of relative risk estimates: Bagnardi and colleagues [8]. RR = Relative risk; CI = Confidence interval.

Drinking alcohol increases the risk of squamous cell carcinoma of the oesophagus which is the most common histological subtype of oesophageal cancer globally, and contributed the most cases of cancer in 2020 attributable to alcohol (189,700 cases) [1][9]. An excess risk of oesophageal squamous cell carcinoma was found in the WCRF Continuous Update Project (RR 1.25 [95% CI 1.12–1.41] per 10 g alcohol per day) [7], and in Bagnardi and colleagues’ meta-analysis, the pooled RR estimates for light and heavy drinking were 1.26 (95% CI 1.06–1.50) and 4.95 (95% CI 3.86–6.34), respectively [8]. There were differences in risk between geographic locations in both meta-analyses, with higher oesophageal squamous cell carcinoma risk among drinkers in studies conducted in Asia than those in North America or Europe. This observation possibly reflects the elevated risk of oesophageal squamous cell carcinoma among carriers of the ALDH2*2 polymorphism of the gene that codes the enzyme aldehyde dehydrogenase 2 (ALDH2) [10]. The ALDH2*2 variant allele is more common in Eastern Asian populations and confers nearly four times the risk of oesophageal cancer among drinkers compared with ALDH2*1 carriers [10]. For oesophageal adenocarcinoma, the second most common histological subtype of oesophageal cancer, no increased risk was observed in the WCRF meta-analysis (RR 1.00 (95% CI 0.98–1.02) per 10 g per day) but an inverse association was found for oesophageal adenocarcinoma and gastric cardia cancer among light drinkers in the meta-analysis by Bagnardi and colleagues (RR 0.86 (95% CI 0.76–0.98)) [7][8].

The most common histological subtype of liver cancer is hepatocellular carcinoma (HCC) and around 154,700 cases of HCC in 2020 were attributable to alcohol consumption [1]. When restricted to HCC only, meta-analysis of WCRF sources resulted in a 14% increased risk of HCC (RR 1.14 (95% CI 1.04–1.25)) per 10 g alcohol per day [7]. However, a possible threshold effect was observed in the non-linear dose-response analysis by WCRF, where less than 45 g alcohol per day did not significantly increase the risk of liver cancer. This was similar to the findings of Bagnardi and colleagues where light or moderate drinking did not significantly increase liver cancer risk but risk among heavy drinkers doubled (RR 2.07 (95% CI 1.66–2.58)) [8].

Alcohol consumption might increase the risk of stomach cancer. The linear dose-response meta-analysis by WCRF resulted in a non-significant RR of 1.02 (95% CI 1.00–1.04) per 10 g alcohol per day, but the non-linear dose-response analysis found an increase in stomach cancer risk for intakes over 45 g alcohol per day [7]. The meta-analysis by Bagnardi and colleagues observed a 21% increased risk in heavy drinking (RR 1.21 95% CI 1.07–1.36), and no significant increase in light or moderate drinking categories [8].

The association between alcohol drinking and risk of other cancer types has been studied but without sufficient evidence to be classified in the IARC monographs or WCRF Continuous Update Project. Positive associations have been reported in some meta-analyses; for example, a 3% increase in lung cancer risk was observed per 10 g alcohol per day in the WCRF meta-analysis based on 28 studies (RR 1.03 (95% CI 1.01–1.04)) after excluding studies which did not control for smoking [7]. A positive association with lung cancer was only found for heavy drinkers in Bagnardi and colleagues’ meta-analysis, but this was probably due to residual confounding from smoking because alcohol use did not increase the risk of lung cancer among non-smokers [8]. Little evidence of an association between alcohol consumption and gallbladder cancer was found in the WCRF Continuous Update Project, but Bagnardi and colleagues found an excess risk of gallbladder cancer among heavy drinkers (RR 2.64 (95% CI 1.62–4.30)). WCRF found an elevated risk of malignant melanoma per 10 g alcohol per day (RR 1.08 (95% CI 1.03–1.13)), but no effect on basal cell carcinoma (RR 1.04 (95% CI 0.99–1.10)) or squamous cell carcinoma (RR 1.03 (95% CI 0.97–1.09)) risk [7]. An increased risk of prostate cancer was observed for light and moderate drinking in Bagnardi and colleagues’ meta-analysis but not in the dose-response analysis of one drink per day by WCRF [7][8].
WCRF found an inverse association between alcohol consumption and kidney cancer risk (RR 0.92 (95% CI 0.86–0.97) per 10 g per day) [7]. However, this association was restricted to light and moderate drinking in Bagnardi and colleagues’ meta-analysis (RR 0.92 (95% CI 0.86–0.99) and 0.79 (95% CI 0.72–0.86), respectively) [8]. The same meta-analysis also found significant inverse associations for the risk of thyroid cancer, Hodgkin lymphoma and non-Hodgkin lymphoma [8].

Alcohol and its metabolite acetaldehyde can drive cancer development through several pathways. Many of these pathways are interlinked and show the complexity and breadth of alcohol’s harmful potential. For example, inflammation can result in oxidative stress, but inflammation is a reaction by the immune system which is itself compromised by alcohol use. Furthermore, DNA damage can occur through exposure to acetaldehyde and reactive oxygen species which are both produced through cytochrome P-450 2E1 activity, with acetaldehyde also a product of alcohol dehydrogenase activity.

Alcohol consumption is a well-established risk factor for cancer and has been linked to cancers of the oral cavity and pharynx, oesophagus, liver, colorectum and breast. While studies have provided evidence on alcohol’s carcinogenic potential, further understanding of alcohol’s pathways to cancer development will inform the direction of future research.

More
© Text is available under the terms and conditions of the Creative Commons Attribution (CC BY) license (http://creativecommons.org/licenses/by/4.0/)
Upload a video for this entry
Information
Subjects: Oncology
Contributor MDPI registered users' name will be linked to their SciProfiles pages. To register with us, please refer to https://encyclopedia.pub/register :
Harriet Rumgay
View Times: 57
Revision: 1 times (View History)
Update Time: 25 Oct 2021
Table of Contents
1000/1000
Hot Most Recent