Submitted Successfully!
Thank you for your contribution! You can also upload a video entry related to this topic through the link below:
https://encyclopedia.pub/user/video_add?id=15354
Check Note
2000/2000
Authorizing GM Crop Varieties
Edit

Once a GM crop has completed the full review cycle for environmental safety, food and feed safety, and DUS/VCU testing, further steps are required to ensure its launch as a new variety for cultivation and safeguarding its sustainability. Again, policy considerations and necessary policy reforms are involved in these final stages, which are analyzed in the sections below. Prior to the planting of GM crop varieties in farmers’ fields, either from domestically produced or imported seeds, they will have to be authorized as certified seed or quality-declared seed in most SSA countries.

In December 2019, Nigeria’s National Committee on Naming, Registration, and Release of Crop Varieties approved the registration of a genetically modified (GM) cowpea variety SAMPEA 20-T (unique identifier: AAT-7Ø9AA-4, full details recorded in the Biosafety Clearing-House, URL: https://bch.cbd.int/database/record.shtml?documentid=114444 , accessed 29 July 2021), which expresses resistance to the cowpea podborer, Maruca vitrata [1]. This landmark decision formed the culmination of two decades of biotechnology research and field testing through an international consortium led by the African Agricultural Technology Foundation. With this decision, Nigeria became the first country worldwide to authorize GM cowpea for cultivation by farmers, and the second country on the continent to authorize cultivation of GM food crops, in addition to South Africa, where GM maize was authorized for cultivation more than two decades ago.

The overall picture of GM crop adoption in sub-Sahara Africa is steadily evolving as a growing number of governments authorize their commercial adoption and have additional GM events in the R&D pipeline. As of 2020, commercial cultivation involved seven countries, as shown in Figure 1 below, with another five countries planting GM crops in pre-commercial confined field trials [2]. While a detailed discussion of recent trends was beyond the scope of this review, notably, the majority of commercialization decisions has taken place in recent years (2019–2020). 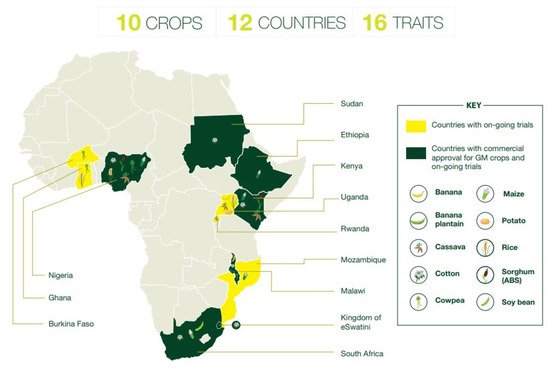 Before the podborer-resistant cowpea’s variety registration was confirmed in Nigeria, a process of intensive government-agency collaboration and harmonization was set in motion in order to pave the innovation pathway for SAMPEA 20-T. Specific steps in this process will be described in more detail in this review paper. Evidently, while the variety registration represented a major regulatory decision, there is still a range of challenges, as described below, facing GM cowpea’s (and other GM crops) actual adoption over time. Many of these are related to the fact that the introduction of GM varieties requires the implementation of specific policies and management practices by government agencies, local seed companies, and farmers that may not be commonplace in highly diverse agricultural production systems dominated by smallholders, where the use of commercial, certified seed is limited. However, if rationally designed, introduced, and implemented, such challenges may turn into opportunities for increased productivity of major food crops with associated economic and social benefits.

Focusing on seed sector impacts and management implications is now critical, considering the increasing adoption and dissemination of GM crops in Sub-Saharan Africa (SSA). This development is reflective of a shift in agricultural development policies across SSA toward increasing productivity and agri-business involvement. The introduction and adoption of GM crops increasingly feature in these policies, resulting in regulatory reforms to spur GM crop approvals. Such regulatory reforms have important reach-through implications on local seed sectors, which are already subject to rapid policy reforms, as described in this review paper.

These general considerations are reflected in recent agricultural and STI strategies adopted by African countries, as summarized in the following sections, which will, among other things, affect the way seed systems are shaped and regulated.

While progress toward meeting the targets is not satisfactory in virtually all signatory countries, seed is acknowledged as a critical input for agriculture and a key pathway to delivering agricultural innovations to farmers. The contribution of seed systems finds its relevance in a number of CAADP commitments. For instance, the commitment to ending hunger by 2025 has targets around doubling agricultural productivity through farm inputs (including seeds) and other interventions. Commitment to enhancing resilience in livelihoods and production systems is also one area where climate-smart, improved seed varieties would play a major role including those that are pest- and disease resistant or drought tolerant.

While the above regional and continental initiatives may hold promise, the key policy challenge to introducing seed sector reforms is the fact that Africa’s seed sector involves numerous players, sometimes with conflicting interests, operating in a loosely integrated value chain [3]. Seed systems in most SSA countries are still relatively underdeveloped, and many farmers plant open-pollinated varieties from previous harvests. Most farmers have yet to take the advantage of new crop varieties mainly due to weak seed production and distribution linkages, limited availability, lack of knowledge, cost, risk aversion, and preference for landrace varieties [3]. Against this background, a majority of African countries (with the exception of Mozambique, Cape Verde, Democratic Republic of the Congo, Djibouti, Guinea Bissau, and Mauritius) have introduced some form of seed policies, laws and regulations, or, govern the seed sector through ministerial orders or decrees. However, challenges of weak enforcement, inadequate resources, and poor coordination still prevail amongst institutions mandated with implementation and enforcement.

Such authorizations do not constitute an end point in the innovation and regulatory process as they have important implications for seed development, delivery, and distribution, requiring policy reforms that affect the local seed systems. Additionally, as part of the process toward authorizing cultivation of GM crop varieties, critical steps must be made in harmonizing different government-agency mandates affecting the commercial release of GM crops. These policy implications and associated policy reforms are described in Section 3.2 and Section 3.3 below.

Prior to the planting of GM crop varieties in farmers’ fields, either from domestically produced or imported seeds, they will have to be authorized as certified seed or quality-declared seed in most SSA countries. For most crops, this condition is commonly regulated under general seed laws and regulations. Generally there are no fundamental obstacles to certifying GM seeds under these legal frameworks; however, the absence of specific procedures for authorizing GM seeds often leads to a level of indecision with seed certification bodies as their legal mandates often pre-date the adoption of biosafety regulatory regimes and may not be fully aligned with biosafety competent authorities.

Related to the points summarized in Section 3.3.1 above is the specific question of dealing with low level presence. Generally, low level presence, sometimes used interchangeably with ‘adventitious presence’, is defined as the unintended incidence of something other than the desired crop. This could include small quantities of weed seeds, seeds from other crops, dirt, insects, or foreign material (e.g., plastic or stone). Specific to GM crops, the UN Food and Agriculture Organization uses the following working definitions: (i) Low Level Presence (LLP): The detection of low levels of GM crops that have been approved in at least one country; (ii) Adventitious Presence (AP): Detection of the unintentional presence of GM crops that have not been approved in any countries. For the purpose of this review the term low level presence (LLP) is used. The LLP of GM seeds in seed supplies is marketed as conventional or organic. With the expected increasing adoption of, and trade involving GM crops in SSA, LLP of GM seeds will grow along with a corresponding increase in the difficulty of obtaining seed purity thresholds and LLP allowances as currently defined in national seed laws and regulations. LLP can be minimized using good agricultural practices and identity preservation schemes; however, it cannot be eliminated entirely and is not unique to GM crops. While practical measures and thresholds can be defined following current seed sector regulations, these may not be acceptable to (potential) international trading partners who sometimes apply a zero-tolerance policy toward unauthorized GM crops or to local organic farming groups.

Obviously, this is a recently emerging topic for seed sector authorities in SSA and examples or best practices from the region are scarce. Practical guidelines and criteria will have to be adopted in countries where GM seeds are planted commercially, in line with existing guidance on seed purity. International guidance, for example, from the International Seed Testing Association will be valuable to the SSA seed sector. A critical element in the enforcement of any LLP guidance will be the capacity—in terms of human skills development and development of common methodologies—to inspect and detect GM seed presence. Initial capacity development in this area is supported by RAEIN-Africa (RAEIN-Africa: Regional Agricultural and Environmental INnovations–Africa. URL: https://www.raein-africa.org/about-us/ ; accessed 29 July 2021), who implements a “Multi-Country Project to Strengthen Institutional Capacities on LMO Testing in Support of National Decision Making” supported through the United Nations Environment Program and involving six SSA countries.

It is generally recognized that good quality seed is fundamental to enhancing agricultural productivity, increasing food security, and improving rural livelihoods. Ensuring its availability and access will be a continuing challenge in SSA, considering the steady rise in the number of undernourished people [4]. The legal and regulatory environment at the national and sub-regional levels is a significant factor impacting the availability and accessibility of improved seed. As the seed sector in SSA continues to evolve, new dimensions and layers of regulation are added that increase complexity. These are associated with the current drive toward more private sector driven agricultural development including the application and adoption of GM crop varieties. The broad implications of these developments are that: Plant breeding, from contained use experiments to field testing, becomes subject to, and needs to consider early-on in the R&D process, various environmental regulations, particularly those related to biosafety and EIA, and regulations covering food and feed safety. Processes for variety registration need to be aligned with biosafety procedures and, where relevant, EIA requirements. Performance data generated during biosafety field testing could be incorporated into testing schemes to determine DUS/VCU. When a new GM variety is launched as commercial seed for farmers, various factors need to be considered such as (i) general stewardship practices; (ii) pest resistance management, as relevant; (iii) stipulations in seed laws and regulations that affect the blending of seeds for refugia purposes; and, (iv) dealing with adventitious presence in conventional seed sales.

While agricultural research and product development is already a tightly regulated sector in most countries, the above challenges may seem daunting to research leaders, regulators, and policymakers in SSA. However, examples are presented above that provide practical ways of addressing identified challenges, which could be adopted in countries with limited experience to date in GMO management. Institutional innovations such as close intra-government coordination through MoU’s and representation in national biosafety committees are emerging that expedite timely reviews and decision-making. In addition, public–private partnerships to guide the proper introduction of GM technology at commercial scale, as adopted in Kenya and Nigeria, can be effective mechanisms to ensure familiarity, farmer awareness, and product stewardship. Finally, policy reforms that underpin harmonization of regulatory mandates such as between procedures for biosafety testing and DUS/VCU testing can be adopted in multiple countries. Together, these are practical ways in which policy and regulatory challenges can be addressed that may benefit agricultural innovation in the long run.

As sub-regional policy bodies such as COMESA and, at the continental level, the African Union are defining their guidance toward biotechnology and biosafety; ideally, such issues are addressed regionally and, possibly result in harmonized policy approaches among SSA countries and their trading partners.