Submitted Successfully!
Thank you for your contribution! You can also upload a video entry related to this topic through the link below:
https://encyclopedia.pub/user/video_add?id=15296
Check Note
2000/2000
West Nile Virus
Edit
This entry is adapted from 10.3390/ani11102951

West Nile fever (WNF) is an arthropod-borne viral disease that is transmitted from birds to humans and animals by mosquitoes. Humans may develop a severe disease, which sometimes can be fatal. At the end of the 20th century, the first outbreak of WNF among humans in an urban environment in Eastern Europa and the United States was reported. The epidemics were characterized by the neurological form of the disease with fatal outcomes. WNF spread is driven by location and time, which means nearby locations and periods have similar patterns. Recognition of patterns of spread of disease is crucial for mitigation of disease and prevention. Regression analysis of the predictors of the infection and spatiotemporal analysis enables the detection of risk factors and measurement of their association with West Nile virus infection in humans and animals.

West Nile virus (WNV) is a single-stranded RNA arbovirus from the Flaviviridae family, genus Flavivirus. WNV is primarily a zoonotic agent transmitted between birds as the main reservoir hosts and mosquitoes as vectors. Humans and horses can be infected as spillovers host, but the infection in these organisms ends without further transmission of the virus, i.e., these organisms are dead-end hosts [1][2]. WNV is today considered the most important cause of viral encephalitis in humans worldwide [3].
The WNV has been isolated or identified serologically in many vertebrate species [4]. Since 1998, cases of viral encephalitis caused by WNV in horses have been reported in Italy, France, and North America. Research conducted in parts of Europe and the Middle East has established that as much as one-third of the tested horses were exposed to the WNV, with or without symptoms of the disease [5][6].
Since the discovery of the first infection in humans in 1937 [4], there has been a significant spread of the disease globally. In most cases, the infection was asymptomatic and only a few cases of severe neurological forms of the disease were reported [2]. At the end of the 20th century, the first West Nile fever WNF outbreaks among humans in urban environments in Eastern Europe and the United States were reported [2]. Since 2012, human WNF cases have been recorded every year in Serbia. In terms of the number of patients, the years 2013 and 2018 stand out, when the largest numbers of clinical cases of infection were registered [7]. The epidemics were characterized by a serious neurological form of the disease with a fatal outcome. During these epidemics, several common characteristics were observed at the time of the disease outbreaks: the Culex pipiens mosquito was identified as a vector of the disease, significantly less precipitation was registered than the usual multi-year average, significantly higher than normal summer temperatures were recorded, and all areas were located near large rivers which provide adequate living conditions for residential and migratory species of wild birds [2]. Besides, the epidemic in the northeastern United States was accompanied by the epizootic in birds, especially crows [8]. The sudden appearance of WNF in the United States can also be related to changes in the feeding habits of Cx. pipiens, the dominant enzootic species. Shifts in feeding habits from competent avian hosts early in the early stage of the epidemic to incompetent humans after mosquito infection, resulted in synergistic effects that greatly amplified the number of human infections [9].
Given that WNF is an arthropod-borne disease, the spread of the disease is conditioned by climatic variations and landscape changes to the natural habitats of the mosquitoes and available bird habitats [1][4], geospatial data can be used for risk prediction and risk mapping [10]. With the development of geographic information system (GIS) software and other related tools for spatial data analysis, substantial progress has been made in risk analysis [11]. Numerous studies have used geospatial data and GIS software for detecting, analyzing, and predicting spatial patterns of disease occurrence [10][12][13][14]. The advantage of the GIS analytical tool is the ability to integrate and analyze risk factors and create WNV risk maps for humans and other susceptible hosts [15]. In addition to visualizing epidemiological data and presenting the geographical distribution of the disease in a much more predictive manner, the spatiotemporal analysis identifies spatial and temporal clusters and identifies risk geographic areas. Spatial inquiry can also inform vector control policy, including where to prioritize limited control resources [16][17][18]. By identifying locations of the WNF hot spots, the mosquito control treatments can be rationally and more efficiently applied primarily in high-risk areas and, therefore, will more efficiently decrease virus transmission [17][19].
The analyses conducted in this paper aimed to discover spatial, temporal, and spatiotemporal clusters of WNV infection in humans and animals in South Banat District, Serbia, also researching for causal relationships, i.e., identifying such clusters of WNV cases and researching possible causal or associative relationships with meteorological factors. Our focus was on understanding spatiotemporal patterns and risk factors associated with WNV infection in humans and domestic animals. An additional aim was to investigate the epidemiological characteristics of WNV outbreaks and provide a scientific basis for the effective control of this disease. Spatial research into the geography of the West Nile disease in Serbia includes WNV surveillance in mosquitos (collected at trap locations), surveillance of WNV infection in horses, wild bird surveillance for WNV presence, and collection of human case residential addresses [20][21]. 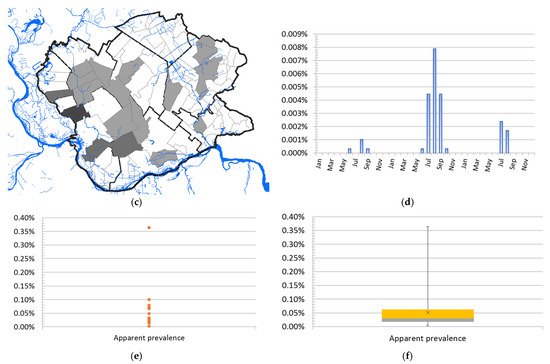 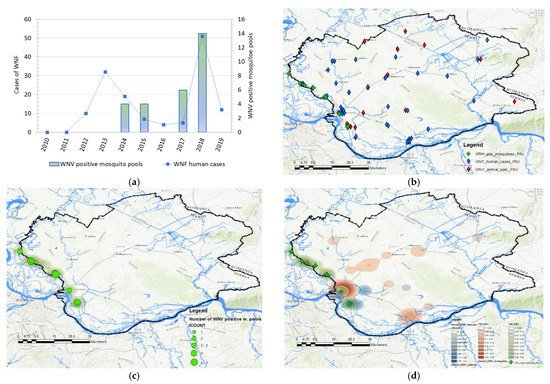 2.4. The Water Level of the Danube and Tamiš Rivers 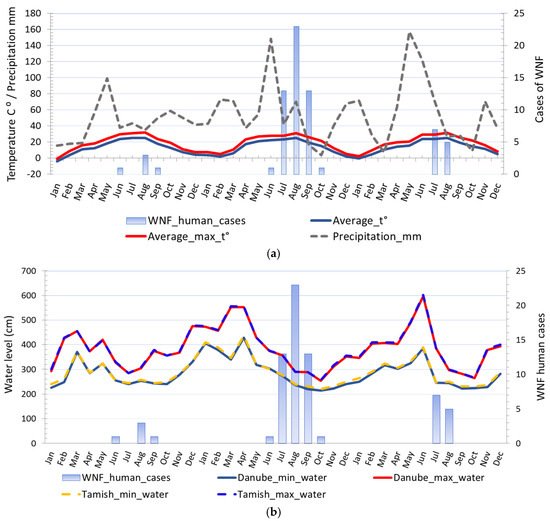 2.5. Results of Seroconversion Tests in Domestic and Wild Animals