Submitted Successfully!
Thank you for your contribution! You can also upload a video entry related to this topic through the link below:
https://encyclopedia.pub/user/video_add?id=1526
Check Note
2000/2000
Innate Immunity to Tick-Borne Pathogens
Edit
Upload a video
This entry is adapted from 10.3390/ijms21155437

Tick borne pathogens, such as Anaplasma spp., Ehrlichia spp., Rickettsia spp., Babesia and Theileria sensu stricto species, cause infectious diseases both in animals and humans. Different types of immune effector mechanisms could be induced in hosts by these microorganisms. The components of innate immunity, such as natural killer cells, complement proteins, macrophages, dendritic cells and tumor necrosis factor alpha, cause a rapid and intense protection for the acute phase of infectious diseases. Moreover, the onset of a pro-inflammatory state occurs upon the activation of the inflammasome, a protein scaffold with a key-role in host defense mechanism, regulating the action of caspase-1 and the maturation of interleukin-1β and IL-18 into bioactive molecules. Innate immunity is activated immediately after the infection and inflammasome-mediated changes in the pro-inflammatory cytokines at systemic and intracellular levels can be detected as early as on days 2–5 after tick bite. The knowledge of the innate immunity mechanisms could lead to the development of new methods of emergency diagnosis and prevention of tick-borne infections.

Babesia sensu stricto (Order Piroplasmida, family Babesiidae) includes infecting agents of a wide range of domestic and wild animals [14][15]. It comprehends both the so-called large (B. caballi, B. bigemina, B. canis, B. rossi, B. vogeli) and small (B. gibsoni, B. bovis) Babesia species [16]. The pathogens infect red blood cells where they reproduce asexually.

Theileria sensu stricto species (order Piroplasmida, family Theileridae) are the aetiologic agents of a variety of diseases in domestic and wild ruminants [15][17]. They include all the Theileria species pathogens for cattle, i.e. T. annulata, T. parva, T. orientalis [16]. After the tick bite, injected sporozoites infect leukocytes and multiply inside them by merogony. Mature schizonts develop into merozoites, which are released and invade erythrocytes, forming piroplasms [18].

Many pathogens are transmitted by tick bites, including Anaplasma spp., Ehrlichia spp., Rickettsia spp., Babesia and Theileria sensu stricto species. These pathogens cause infectious diseases both in animals and humans. Different types of immune effector mechanisms could be induced in hosts by these microorganisms, triggered either directly by pathogen-derived antigens or indirectly by molecules released by host cells binding to these antigens. The components of innate immunity, such as natural killer cells, complement proteins, macrophages, dendritic cells and tumor necrosis factor alpha, cause a rapid and intense protection for the acute phase of infectious diseases. Moreover, the onset of a pro-inflammatory state occurs upon the activation of the inflammasome, a protein scaffold with a key-role in host defense mechanism, regulating the action of caspase-1 and the maturation of interleukin-1β and IL-18 into bioactive molecules.

The innate immune signalling structures, the so called innate immune sensors, include Toll-like receptors (TLRs), Nod-like receptors (NLR), absent in myeloma (AIM2), C-type lectin receptors, retinoid acid-inducible gene I-like receptors (RIG I-like) and cyclic GMP-AMP synthase (cGAS)/STING (stimulator of interferon genes) [24][25]. The best analyzed pathways are those activated from TLR and NLR receptors, which localize and respond to antigens either on membrane surface or inside the cells, respectively [26]. TLRs are pattern recognition receptors, which sense a broad range of microbial ligands leading to expression of genes involved in inflammation and other immune responses [27], while NLR proteins are cytosolic pathogen recognition receptors (PRRs) able to oligomerize into a large inflammasome. Inflammasome is a protein scaffold with a key-role in host defence mechanism regulating the action of caspase-1 (CASP1) and the maturation of interleukin-1β (IL-1β) and IL-18.

Upon activation, multimeric complexes assemble to function as activation platforms for the autoproteolysis of CASP1, a protease which cleaves pro- IL-1β and IL-18 into their mature forms [30] (Figure 1). 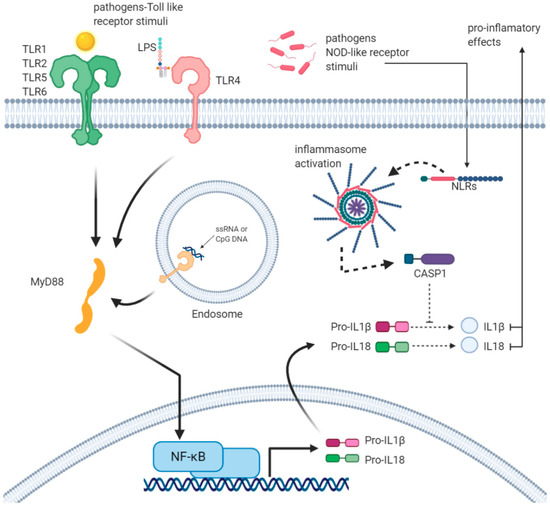 Figure 1. Inflammasomes activation and production of IL1β and IL18: Surface-expressed TLRs, such as TLR1, 2, 5, and 6, bind TLR-dependent stimuli, for example bacterial PAMPs. Following this binding, TLRs, through the adaptor protein MyD88, activate the transcription factor NF-κB to induce the expression of inflammatory genes, such as IL1β and IL18, leading to the production of pro-IL1β and pro-IL18. On the other hand, different PAMPs or DAMPs activate the inflammasome through various NLRs, such as NLRP3. Inflammasome leads to active Caspase-1 that processes pro-IL1β/pro-IL18, leading to the active form of IL1β and IL18. Active cytokines leave the cell and act as pro-inflammatory molecules.

Activation of inflammasomes causes a sequence of responses, including release of IL-1β andIL-18 and the induction of pyroptotic, or inflammatory, cell death through cleavage of gasdermin D (GSDMD) [32][33]. GSDMD is a pore-forming protein, which cleavage by the inflammatory caspases critically determines pyroptosis by releasing the cleaved gasdermin-N domain that bears intrinsic pyroptosis-inducing activity [34]. In particular, active CASP1 enzymatically cleave GSDMD into two fragments (the N domain and C domain). The GSDMD-N domain can form pores on lipid membranes, drive K+ efflux and induce pyroptosis through cell membrane disruption [35][36].

Inflammasomes can interact directly with the inflammatory effector CASP1 through CARDs or by utilizing the adaptor apoptosis-associated speck-like (ASC) protein to mediate the interaction between PYD-containing sensors and CARD-containing CASP1.

Non-canonical inflammasome activation has two main effects: (1) the induction of pyroptosis and (2) the secretion of the pro-inflammatory cytokines IL-1β and IL-18 via the activation of the canonical NLRP3 [37][38][39]. GSDMD is the effector molecule linking these two downstream processes [32][33]. Indeed, murine CASP11 (CASP4 and CASP5 in humans) oligomerizes upon binding with cytosolic LPS and becomes active. Active CASP4/5 cleaves GSDMD to drive pyroptosis and NLRP3 inflammasome-dependent cleavage of CASP1 [40]. CASP4-mediated NLRP3 activation depends on potassium efflux [41].

Some recent studies showed that LPS is not directly recognized by caspases but through a receptor called guanylate-binding protein 1 (GBP-1), which protects in a cell-autonomous manner against infection with bacteria, parasites and viruses and promotes the activation of human CASP4 upon transfection of LPS [42]. Moreover, GBP1 acts as a cytosolic LPS sensor detecting and targeting the LPS-containing membranes of Gram-negative bacteria, where it assembles a platform that promotes CASP4 recruitment and activation [43].

There are probably aspects of inflammasome biology, which may be elucidated in the context of infections with uncommon pathogens. Ticks transmitted pathogens are deeply different from other, more commonly studied microbes, especially for their life strategy and induced pathology. For example, many of them induce a less severe disease compared to the pathogens commonly activating inflammasome. Some tick-borne bacteria do not display canonical PAMPs, such as lipopolysaccharides (LPS) [44][45].

Even though recent studies have shed light on the role of innate immunity during tick-borne infections, much remains unknown. Host immune response could interact with Babesia spp., Rickettsia spp., Anaplasma spp., Ehrlichia spp. and Theileria spp. using different cells and/or molecules responsible for the innate immune response onset. Effector mechanisms of innate immune responses, displayed by host in short time, are able to inhibit symptoms in the acute infection phases, but they do not contain the infection. Instead, this task is up to T and B cell responses, mounted by the immune system afterwards and able to induce a long-term protection against pathologies induced by tick-borne microbes.

Tick-transmitted microbes differ both physiologically and in their pathogenic potential from other well-characterized pathogens. This is likely the result of the exposition of TBPs to the evolutionary pressures of complex interactions among vertebrate hosts and vectors [46][47]. As previously proposed [48], tick-host-pathogen molecular interactions evolved as conflict and cooperation with mutual beneficial effects for all parts. These interactions evidence coevolutionary mechanisms by which pathogens manipulate tick vector and animal host protective responses to facilitate the infection and transmission of the disease.

An example of this selective pressure may be the ability of A. phagocytophilum to persist in immune-competent hosts between seasons of tick activity. This ability is the result of a complex and coordinated interaction that have led the bacterium to reduce its genomes to only essential genes allowing for nearly infinite numbers of recombined antigens and macromolecular exchange with its host cell [3][49][50]. Another finding supporting the close co-evolutionary relationship among microorganisms, ticks and animal hosts resulted by a recent geographically extensive phylogenetic study on groEL sequences of A. phagocytophilum, showing a considerable spread of some of its haplotypes and the affinity of some others towards well-defined groups of vertebrates, ticks and regions [51].

Despite some tick-borne pathogens lack of PAMPs, they may elicit inflammasome activation by inducing a dysregulated state within the host cell by causing aberrant compartmentalization of molecules, proteins and/or lipids. Consequently, the downstream inflammasome signalling culminates in proinflammatory cytokine secretion [52] and changes in their plasma levels can be detected as early as on days 2–5 after tick bite. The GO analysis underlined five key points that need to be deeply characterized to better understand the role of innate immunity in response to tick borne pathogens. These key points include IFN-γ secretion, inflammasome complex, transferrin receptor activity, macrophage activation and TLR signalling pathway. IFN-γ secretion, TLR signalling and macrophage activation in immune system of hosts infected by tick-borne pathogens were previously studied but a more profound analysis of these mechanisms needs to be performed for an optimal understanding of the role of these pathways in immunity against tick-borne pathogens. Future research projects need to better characterize the role of the transferrin receptor pathway in innate immune response to tick-borne pathogens.

We hypothesize that research in the fields of inflammasome as well as transferrin receptor pathway, will advance the discovery of mechanistic details of inflammasome activation and innate immunity, which may ultimately be related with disease progression and immunological resistance to tick-borne infections. The deep knowledge of the innate immunity mechanisms could lead to design new strategies of diagnosis and prevention of tick-borne diseases and allow the assessment of possible new immunotherapies for these infectious diseases.

More
© Text is available under the terms and conditions of the Creative Commons Attribution (CC BY) license; additional terms may apply. By using this site, you agree to the Terms and Conditions and Privacy Policy.
Upload a video for this entry
Information
Subjects: Biochemistry & Molecular Biology
Contributor MDPI registered users' name will be linked to their SciProfiles pages. To register with us, please refer to https://encyclopedia.pub/register :
Valeria Blanda
View Times: 221
Revisions: 5 times (View History)
Update Time: 18 Dec 2020
Table of Contents
1000/1000
Hot Most Recent