Submitted Successfully!
Thank you for your contribution! You can also upload a video entry related to this topic through the link below:
https://encyclopedia.pub/user/video_add?id=15241
Check Note
2000/2000
Naturalized Parrots
Edit
Upload a video
This entry is adapted from 10.3390/d13090412

Parrots have been transported and traded by humans for at least the last 2000 years and this trade continues unabated today. This transport of species has involved the majority of recognized parrot species (300+ of 382 species). Inevitably, some alien species either escape captivity or are released and may establish breeding populations in the novel area. With respect to parrots, established but alien populations are becoming common in many parts of the world.

Parrots have been transported and traded by humans for at least the last 2000 years and this trade continues today [1]. Cardador et al. [2] summarized trade data available through the Convention on International Trade in Endangered Species of Wild Fauna and Flora (CITES [3]) and documented that during the 20-year period 1975 to 2015, more than 19 million individual parrots of 336 species were legally traded among countries. This involved an average of more than half a million birds each year, with the parrot trade representing approximately 25% of all legal bird trade [2].
Inevitably, some individuals of introduced alien species either escape captivity and/or are accidentally or purposefully released and may begin breeding in the wild in the novel area [4][5]. Parrots are no exception and released or escaped parrots are often quite successful at surviving in the wild in new areas. Over time, if a successful breeding population is established, the species would be considered naturalized in that area. In some cases, the new populations can expand rapidly and grow exponentially in size [6][7][8][9][10]. If the species extends its naturalized range and establishes additional populations, it may become invasive.
Naturalized and invasive species are increasing worldwide, and parrots represent an increasingly large proportion of the naturalized bird species [11][12]. Although the invasive nature of established foreign parrot species is debated [13][14][15], naturalized parrot populations are increasing in distribution and size. Additionally, their interactions with humans are also increasing and becoming more complex and involve both positive and negative aspects [16][17][18][19][20]. This interaction with humans also includes control of some populations. In many cities around the world two common introduced parrots, the Rose-ringed Parakeet (Psittacula krameri) and Monk Parakeet (Myiopsitta monachus) are being controlled due to real or perceived problems with human activity. This is also true for some species in their native distribution [21].
The wildlife trade that ultimately gives rise to naturalized populations of parrots can also directly and negatively impact populations of species in their native ranges [22]. In many cases, this trade is causing species to be endangered in their native area, while at the same time inadvertently creating the possible situation where a population may establish itself in a novel and foreign area. In addition, the established populations can have impacts on local and native species [13]. It seems critical, therefore, to know exactly how many parrot species have established breeding populations in novel areas outside of their natural distribution. Such information is critical for monitoring introduced populations, informing management priorities, and understanding how introduced population may relate to the conservation of endangered populations in the native range of species [20]. That is the purpose of this review. We summarize multiple databases and attempt to arrive at an estimate for the number of parrot species both introduced and naturalized in the world. Our effort includes providing a database combining information from separate sources for use by other researchers.
Efforts to estimate the number of naturalized parrots have been made for almost two decades, and a comparison of the results highlights that the number and distribution of naturalized parrots is increasing. In one of the first efforts at counting naturalized parrots, Lever [23]; see also [24] reported that 34 species of parrots established naturalized populations. Two years later, Runde et al. [25] reported that there were 39 naturalized parrot species. Subsequently, Menchetti and Mori [13] reported about 60 parrot species were breeding outside their native distribution, and Avery and Shiels [26] reported 54 species have been introduced into foreign areas and 38 of these have become established. Most recently, Royle and Donner [24] examined records in the Global Avian Invasion Atlas (GAVIA) database [27] from 1993–2012 and documented records of 129 species of parrots observed in 106 countries. From these records, Royle and Donner concluded that there were at least 47 species of parrots in 21 genera that are naturalized in at least one country outside their native range. Lastly, a recent estimate of the geographical range of naturalized parrots is that of Mori and Menchetti [15] in which they conclude that species are found in 47 countries and all continents except Antarctica [28][29][30]. The variation in recent estimates is due in part to the sources of the information reviewed, and the time frame considered. Although our study is also subject to the same limitations, our review represents the first attempt to estimate the number of naturalized species based on a combination of the available data sets that have previously been analyzed separately. Additionally, for the United States, we compare the data from the public data sets with detailed reviews and field observations to examine the consistency and accuracy in the public data sets.

Based on the GAVIA, eBird, and iNaturalist databases (hereafter referred to as the combined database), there are records of 166 species of Psittaciformes having been introduced (seen in the wild) in 120 countries or territories outside of the native range (Figure 1; Tables S1 and S2). These species comprise 43% (166 of 382) of all known species of Psittaciformes and approximately half (49.4%, 166 of 336) of the species of parrots identified in the international parrot trade [2]. Of these 166 species, 60 species have been recorded or are now known to be naturalized and an additional 11 species are breeding in at least one country outside of their native range, being present in a total 86 countries or territories. 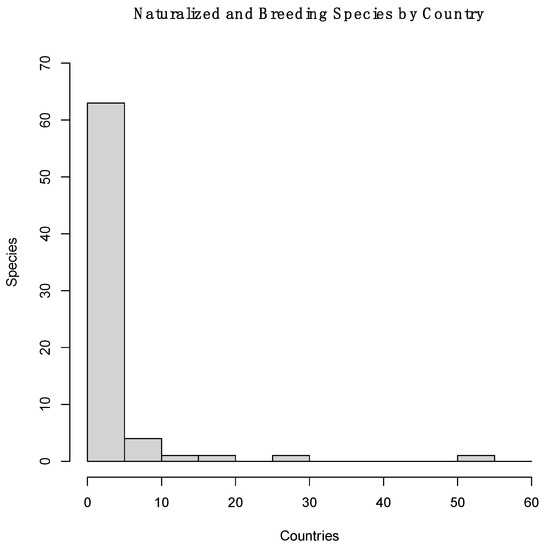 Figure 2. The frequency distribution of introduced and naturalized or breeding species of parrots (Psittaciformes) across countries.
Countries vary enormously in size, and the area of occupancy (AOO) is a more objective measure of the geographical distribution of introduced populations than number of countries occupied. For introduced parrots (species observed in the wild outside their native range), the AOO varied widely. The mean AOO was 714.3 km2 (n = 135; range = 4–21,944 km2; SD = 2595.7; Figure 3). Above, the six most widely distributed parrots are listed in terms of countries occupied. This list changes when considering AOO. The six species with the largest AOO of introduced populations are: Monk Parakeet (21,944 km2), Rose-ringed Parakeet (18,812 km2), Eastern Rosella (Platycercus eximus, 5976 km2), Nanday Parakeet (Aratinga nenday, 4840 km2), Red-crowned Amazon (Amazona viridigenalis, 3376 km2) and Budgerigar (3172 km2). Only the Monk Parakeet and Rose-ringed Parakeets overlap in these two ranked lists. Figures S1–S6 illustrate the global distributions of the sightings of these six species outside their native ranges.

Figure 3. The frequency distribution of introduced and naturalized or breeding species of parrots (Psittaciformes) by their AOO (Area of Occupancy). The AOO only refers to introduced populations.
Despite the difference between countries as an indicator of geographical spread and AOO, there was a significant correlation between the number of countries a species was introduced in and the AOO (Figure 4; Spearman Rs = 0.732, p < 0.001).