Submitted Successfully!
Thank you for your contribution! You can also upload a video entry related to this topic through the link below:
https://encyclopedia.pub/user/video_add?id=15227
Check Note
2000/2000
Stand-Level Optimization
Edit
Upload a video
This entry is adapted from 10.3390/f12101389

There is a vast backlog of conducted first commercial thinnings (FCTs) in Finland. The reasons are many, but probably the most crucial would be the lack of simultaneous economic incentives for participating agents, i.e., private forest owners and forest machine contractors. In this study an FCT was executed accruing to five predetermined management options: (1) Industrial wood thinning with only two timber assortments, pulpwood and saw logs, (2) Integrated procurement of industrial and energy wood, (3) Energy wood thinning solely consisting of delimbed stems, (4) Whole-tree energy wood thinning with an energy price of 3 € m−3 and (5) Whole-tree energy wood thinning with energy price of 8 € m−3. Then, a two-phase financial analysis consisting of stand-level optimization (private forest owners) and profitability assessment (contractor) was conducted in order to find out whether there would be simultaneous economic incentives for both participants of FCT. The stand-level optimization revealed the financially best management options for a private forest owner, and then, for a contractor, the profitability assessment exposed the profit (or loss) associated with the particular management option.

The growing stock volume of the Finnish forest resources has been accumulating steadily during the last decades, reaching a value of almost 2500 million cubic meters [1], and so too has the roundwood trade increased during recent years, ranging between ca. 60 and 71 million cubic meters per annum [1]. Despite these positive signals, first commercial thinnings (FCTs) tend to be a bottleneck of the Finnish silviculture—the area of managed/conducted FCTs falls distinctively short of the planned/scheduled area which is based on the silvicultural status and urgency [2]. For instance, in Lapland (the northernmost province of Finland), the need for FCTs within the next five years corresponds to a total of app. 470,000 hectares, while during the last five years there have been carried out app. 190,000 hectares of FCTs [3]. Such a gap between the need for FCTs and actually managed hectares of FCTs—the backlog of FCTs—would in time create problems at aggregate levels in the form of, e.g., a reduction in mean annual increment and decreased timber supply (“passive management”, see [4]). In order to avoid the problems stemming from the backlog of FCTs, potential financial incentives need to be discovered and further revealed for various stakeholders involved in FCT operations. In addition, managing young forests could generate positive socio-economic impacts both at the regional as well as on the national level [5].
In general, stand density is controlled through thinnings to increase growth and to improve stem quality by removing low-quality stems (e.g., [6]). More precisely, FCT in conifer stands affects the diameter growth of dominant trees and, in general, the vigorousness of trees—so that neglecting FCT would delay the diameter growth and, in some cases, would increase the mortality at stand level [7][8]. On the other hand, one of the main reasons for the neglected FCTs is the generally low profitability due to the small stem size and high harvesting costs [9][10]. During the years, there have been several attempts to improve the profitability of FCT, for instance, by applying delimbed-tree [11][12][13][14], or whole-tree harvesting [14][15][16][17][18], integrated harvesting of energy wood and pulpwood [14][19][20][21] or rationalizing integrated harvesting of small-diameter wood by introducing a new technical prototype [22][23]. Regardless of various attempts and existing subsidies (for subsidies, see [24][25]) to improve the profitability of FCT, there still exists a challenge to carry out a financially viable FCT, at least so that each actor (forest owner, forest machine contractor and forest industry company) involved would have a solid financial incentive to venture into business. Further, we consider that the scope of this study (to discover financial incentives related to participating actors of FCT) is eminently country-specific due to, e.g., different legal and operational practices between countries (see [18][24]) facing seemingly similar FCT problems. Thus, the primary goal is to discover the financial incentives associated with FCT country-wise, and only after comparing the results between countries.
In order to assess the financial viability of forest management in a theoretically sound way, one needs to apply stand-level optimization [26], through which the bare land value is maximized (e.g., [27]). In brief, maximizing the bare land value (BLV) yields the discounted economic surplus over an infinite time horizon [28]. In the case of rotation forestry, RF (for terminology, see, e.g., [29]) stand-level optimization reveals the timing and intensity of thinnings as well as the length of the rotation. In this study, the RF approach was adopted, and five options to conduct a FCT were simulated and further optimized (to maximize the BLV) for discovering their financial performance from the viewpoint of a private forest owner. The five options present commonly-used practices applied for FCT, ranging from pure industrial roundwood procurement to a ‘whole trees for energy wood’ alternative. The real-life data for the analyses were derived from a silvicultural database consisting of non-industrial private forest owners’ and NIPFs’ forests in Finland [30]. When stand-level optimization is executed by applying stumpage prices (here), the results, i.e., optimal solutions, refer to the profitability from the private forest owner’s point of view (e.g., [31]).
Conducting a FCT requires that all agents involved find financial incentives to participate. Thus, a financially viable result for a private forest owner does not necessary guarantee that a FCT actually takes place—for example, if there is no economic incentive for a forest machine contractor to employ a thinning, i.e., cut the trees (cf. [32]).

The simulations and, further, the financial analyses were based on stand characteristics of six individual stands located in northern Finland (Figure 1). The six stands were derived from a database consisting of NIPF (non-industrial private forests) stands with an urgent need for the first commercial thinning, FCT [30]. The chosen stands belong to specific clusters of postponed FCTs. The clusters (consisting of individual stands) were derived from the project “Timber from postponed first thinnings in Northern Finland”, implemented by the Natural Resources Institute Finland (Luke) and Finnish Forest Centre (Metsäkeskus), and funded by the Centre for Economic Development, Transport and the Environment (ELY) of Northern Ostrobothnia. The stands were selected according to: (i) the stand has passed the juvenile development phase but is not yet a mature stand (technically representing category 2 or 3 in the Finnish system) and (ii) a FCT had been suggested to be conducted in the stand within the past five years. The six chosen stands were quite similar with respect to stem number (trees per hectare) and soil type, but there was a distinctive difference in basal area and mean diameter (DBH) among the stands (Table 1). 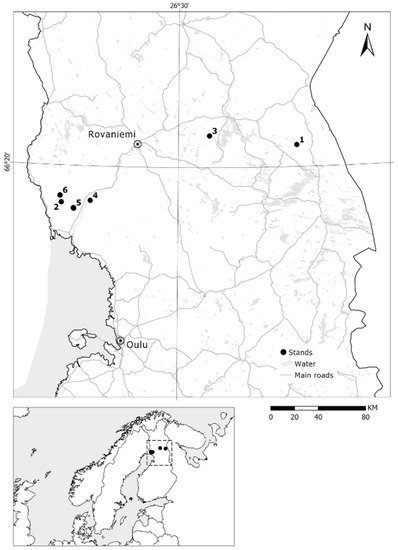 Figure 1. A map presenting the locations of Stands 1–6 under study.
Table 1. Stand characteristics of stands 1–6.

As expected, the timing of the final cutting of the ongoing rotation fluctuated considerably, depending on the option (1–5) used to conduct the first commercial thinning (Figure 2, Table 2). For simplicity, optimal management associated with options 1–5 is presented only for stand 1 (Figure 2). In the integrated option (option number 2) the optimal rotation was 94 years, while in option 5 (energy wood, whole II) the corresponding rotation was as high as 107 years (Figure 2). Options 1 (traditional) and 3 (energy wood, stems) resulted in almost identical rotation periods of 101 and 102 years, respectively (Figure 2).

From the private forest owner’s point of view, the best performer (expressed as MaxNPV, Equation (2)) was option 1, traditional, where only saw logs and pulpwood are procured (Figure 3a). For instance, the highest MaxNPV was reached with option 1, the value of 6999 € ha−1, while the lowest MaxNPV value was associated with option 4 (Energy wood, whole I), 2665 € ha−1 (Figure 3a). For pure energy wood alternatives (option 3, 4 and 5), the best performer was option 5 (energy wood, whole II) with a median of 4879 € ha−1 (Figure 3a). Two options (traditional and integrated, options 1 and 2, respectively) distinctively outperformed the other three options (3, 4 and 5) from the contractor’s point of view (Figure 3b). The highest profit among the six stands for a contractor at the first thinning was as much as ca. 2000 € ha−1 in option 1 (traditional), while in option 3 (energy wood, stems) a contractor might even operate at a loss (Figure 3b). Further, in option 4 (energy wood, whole I) and 5 (energy wood, II) the contractor barely makes a profit at the first commercial thinning (Figure 3b). 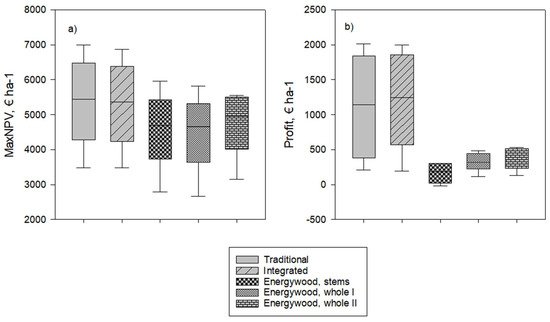 Figure 3. (a) Boxplots presenting the maximum NPV of options 1–5, € ha−1 (private forest owner’s viewpoint), and (b) profit associated with options 1–5 at the first commercial thinning (contractor’s point of view). (Note that bottom edge of each box illustrates the 25th percentile, upper edge the 75th percentile, a line within a box marks the median and whiskers of the boxplots indicate 5th and 95th percentiles.)