Submitted Successfully!
Thank you for your contribution! You can also upload a video entry related to this topic through the link below:
https://encyclopedia.pub/user/video_add?id=15225
Check Note
2000/2000
Phytohormone Regulation of Apple-Fruit Ripening
Edit
This entry is adapted from 10.3390/plants10102061

Apple (Malus domestica) is, globally, one of the largest fruits in terms of cultivated area and yield. Apple fruit is generally marketed after storage, which is of great significance for regulating the market supply in the off-season of fruit production. Apple-fruit ripening, which culminates in desirable changes in structural and textural properties, is governed by a complex regulatory network.

The apple ( Malus domestica ) is a fruit with a good range of cultivars, which have different ripening rates; depending on the different ripening rates, it may be supplied for market year-round from harvest [1]. As a typical climacteric fruit, apples have a peak in respiration and a burst of ethylene to unleash the ripening process in an autocatalytic response just prior to the initiation of ripening [2]. Apple-fruit ripening is mainly regulated by the phytohormone ethylene [2]. Therefore, it appears to be possible to control the storage life of apple fruit by regulating ethylene biosynthesis. For example, treatment with the compound ethephon, which is converted into ethylene in planta, promotes ethylene production and apple-fruit ripening [3], while 1-methylcyclopropene (1-MCP, an ethylene antagonist) treatment significantly blocks ethylene production and apple-fruit ripening [4]. Knowledge on the role of phytohormones other than ethylene during apple-fruit ripening has been limited for a long time. However, an increasing number of studies point to important roles for jasmonates, auxins, brassinosteroids, and abscisic acid in apple-fruit ripening [4][5][6][7].

Ethylene, a gaseous phytohormone, plays a central role in climacteric fruit ripening. In the apple ripening process, ethylene production gradually increases to a peak, and then gradually decreases; the fruit then moves into the aging stage [3]. The ethylene produced in climacteric fruit is divided into systems 1 and 2. System 1 is mainly responsible for ethylene biosynthesis in young fruit. System 1 ethylene is autoinhibited. System 2 is mainly responsible for ethylene biosynthesis in ripe fruit, and active when climacteric ethylene must be produced. System 2 ethylene in vivo can be autocatalytic by ethylene ( Figure 1 ) [8]. 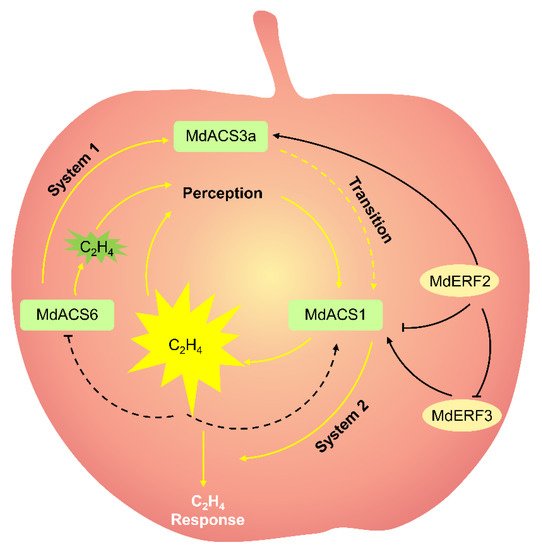 The ethylene is regulated by two pathways in fruit: the biosynthesis pathway and signal-transduction pathway. The ethylene biosynthesis consists of two critical steps: the conversion of S -adenosylmethionine (SAM) into 1-aminocyclopropane1-carboxylic acid (ACC) by ACC synthase (ACS), and then the formation of ethylene from ACC by ACC oxidase (ACO) [9]. ACC acts as a direct precursor of ethylene biosynthesis, and its concentrations are closely related to ethylene production [10][11]. Therefore, ACS and ACO are the rate-limiting enzyme in ethylene biosynthesis [3]. Ethylene biosynthesis in plants, especially in fruit, is a complex reaction involving the cooperative action of multiple ACS and ACO genes. In other words, ethylene biosynthesis in a fruit requires distinct ACS genes acting at different developmental processes. In apples, MdACS6 , MdACS3a, and MdACS1 are three important coordinated MdACSs that regulate ethylene biosynthesis during apple-fruit development and maturation [3][12][13]. Of these, MdACS6 is expressed in the preliminary stage of apple-fruit development, before MdACS3a and MdACS1 are expressed [12], implying that MdACS6 mainly catalyzes the ethylene production in the preliminary stage of apple-fruit development. MdACS6 expression decreases around 30 days prior to maturation, when MdACS3a expression is initiated [13][14]. This suggests that MdACS3a may replace MdACS6 catalysis to meet the demand for ethylene production in apple fruit just prior to maturation. The overexpression of MdACS6 induces MdACS3a expression, indicating that MdACS6 can regulate MdACS3a expression [12]. At the onset of ripening, MdACS1 is abundantly expressed and is responsible for ripening-related ethylene biosynthesis in apple fruit ( Figure 1 ) [2][15]. Considering gene structure, MdACS1 contains an RLSF motif and a C-terminal tail, which is indispensable for mitogen-activated protein kinase 6 and calcium-dependent protein kinase phosphorylation, respectively; however, MdACS6 and MdACS3a have neither of them [2][15]. This may be one of the reasons why in apple fruit, MdACS6 and MdACS3a are expressed during the development stage, while MdACS1 is specifically expressed during the ripening stage. During apple-fruit ripening, ethylene production is strictly related to MdACS1 expression [2][16]. Moreover, the differential expression of MdACS1 allelic forms ( MdACS1-1 and -2 ) among different apple cultivars causes differences in the ethylene production of fruit [16]. All cultivars that were homozygous for MdACS1-2 produced apples with good long-term storage properties and/or less ethylene production than other MdACS1 allelic cultivars at the climacteric stage, such as cv. Fuji [2]. Additionally, they have a lower preharvest drop rate than that of other MdACS1 allelic cultivars by calculating the preharvest fruit drop rate of 40 commercial cultivars [17]. The importance of MdACS1 in fruit ripening was shown in transgenic apples, in which MdACS1 was silenced with RNA interference [18]. The silencing of MdACS1 in apples produced 94% less ethylene during respiration and were significantly firmer than the controls, displaying a longer shelf life [18].

In the ethylene signaling transduction pathway, ethylene firstly binds to receptors [19]. Three ethylene receptor families: ethylene resistant (ETR), ethylene response sensor (ERS), and ethylene insensitive 4 (EIN4), have been identified. Nine ethylene receptors (MdETR1, MdETR1b, MdETR2, MdETR5, MdETR101, MdETR102, MdETR105, MdERS1, and MdERS2) were identified in apple [20]. All these receptor genes are expressed in the apple fruit except MdETR101. The transcriptional level of MdETR2 , MdETR5 , MdETR102 , MdERS1, and MdERS2 is remarkably induced by exogenous ethylene treatment during apple-fruit ripening [20], suggesting that they are related to fruit ripening. Then, constitutive triple response 1 (CTR1) acts downstream of the receptors [21]. When ethylene does not exist, receptors activate the kinase activity of CTR1 and the downstream progression of signaling is suppressed. When ethylene exists, the receptors no longer activate CTR1, and downstream positive responses, such as ethylene insensitive 2 (EIN2) and the EIN3-like (EIN3/EIL) family, are activated [22]. The EIN3/EIL family is the primary or core transcription factor (TF) binding to the primary ethylene response element (PERE) or EIL conserved binding sequence (ECBS) motif of gene promoters to regulate their transcription [23]. During apple ripening, fruit coloration is accompanied by ethylene biosynthesis [24]. The mechanism is that ethylene treatment evidently promoted fruit coloration as well as MdEIL1 expression. Ethylene-activated MdEIL1 binds directly to the MdMYB1 promoter to promote MdMYB1 expression, anthocyanin accumulation, and fruit coloration [24]. Downstream of EIN3/EIL, the ethylene response factor (ERF) is the secondary TF to trigger ethylene progression. In apples, the silencing of MdERF2 led to rapid fruit ripening, while MdERF2 overexpression led to delayed fruit ripening compared with in the controls [3], indicating that MdERF2 functions as a negative regulator in apple ripening. ERF can exclusively bind to the dehydration-responsive element (DRE) motif or GCC box of promoters of ethylene-responsive genes [3][25]. In apples, as a negative regulator, MdERF2 binds to the DRE motif of the MdACS1 promoter and suppresses its expression [3]. MdERF3 also binds to the DRE motif of the MdACS1 promoter but enhances its expression, acting as a positive regulator of apple ripening [3]. MdERF2 functions upstream of MdERF3, where MdERF2 binds to the MdERF3 promoter and suppresses MdERF3 transcription ( Figure 1 ) [3].

Auxins have been widely studied as growth and development regulators in fruit [26][27]. An increasing number of studies show that auxin also acts as a fruit-ripening regulator. In general, the most abundant free auxin, indole-3-acetic acid (IAA), is seen as the main regulator in fruit [28]. In apple fruit, endogenous IAA contents are extremely high during the initial growth developmental stages, after which IAA contents tend to decline to low levels at the onset of fruit ripening [5].

Signal transduction by auxin is understood well. In the absence of auxin, auxin/indole-acetic acid proteins (Aux/IAAs) interact with auxin response factor (ARF) and suppress their activity, which prevents the downstream progression of signaling. In the perception of auxin, its receptor, transport inhibitor response 1 (TIR1), recognizes auxin, which promotes the interaction between Aux/IAAs and TIR1. Then, Aux/IAAs are removed by ubiquitin-mediated action, so that ARF is released to regulate the expression of downstream genes [29][30]. ARF is described as the key TF in the auxin signaling pathway. In apples, MdARF5 silencing led to delayed ethylene production and slower ripening, while the overexpression of MdARF5 substantially promoted ethylene production and ripening compared with controls, indicating that MARF5 functions as a positive regulator of apple ripening [5].

Abscisic acid (ABA) has long been described to be primarily involved in the ripening process of nonclimacteric fruit [37][38]. In recent years, an increasing number of studies discovered that ABA also regulates the ripening of climacteric fruit [39][40][41]. The endogenous ABA concentration is low in green fruit but increases during apple-fruit ripening [42][43]. The ABA concentration of apple fruit (cv. Red Winesap) is maintained at a range of 100–120 ng g −1 FW in 60–130 DAFB. Afterwards, apple fruit show a sharp increase in the ABA concentration to a level of 230–240 ng g −1 FW, and this reaches the maximal observed levels of about 300 ng g −1 FW just before commercial harvest (172 DAFB) [42]. Studies showed that the maximal endogenous ABA precedes a burst of ethylene in apple fruit [42]. These results indicated ABA may be the other regulatory factor upstream of ethylene for apple-fruit ripening.

So far, there is not much information about the mechanisms through which ABA regulates apple-fruit ripening. In Hongyu apples, three different stages of fruit that were harvested at 120 DAFB considered to be commercially ripened were identified: 110 DAFB as preripening and 120 DAFB followed by five days storage at 20 °C as postripening samples were used for RNA-Seq analysis. Differentially expressed gene-analysis results showed that, in the ABA biosynthesis pathway, the expression of key catabolizing gene encoding 9-cis-epoxycarotenoid dioxygenase (NCED1 ) was higher in postripening apples, suggesting that ABA might play a regulatory role in apple ripening [7]. Moreover, another gene encoding protein phosphatase 2C and involved in ABA signaling showed higher expression in postripening apples, and several genes encoding serine or threonine protein kinases showed lower expression [7]. These findings suggest that ABA may mediate protein-phosphorylation modification to affect apple-fruit ripening. However, the specific mechanism by which ABA affects apple-fruit ripening is unclear.