Submitted Successfully!
Thank you for your contribution! You can also upload a video entry related to this topic through the link below:
https://encyclopedia.pub/user/video_add?id=15155
Check Note
2000/2000
Endoscopic Ultrasound in the Diagnosis of Gallbladder Lesions
Edit
Upload a video
This entry is adapted from 10.3390/diagnostics11101789

Endoscopic ultrasound (EUS) has a high spatial resolution that can improve the diagnosis of GB polypoid lesions, GB wall thickness, and GB carcinoma staging. Vascularity can be evaluated using contrast-enhancing agents. Therefore, contrast-enhanced EUS may be useful for the differential diagnosis of GB lesions. However, the evidence of their effectiveness is still limited, and further studies are required in this area to establish its usefulness.

Gallbladder (GB) diseases are relatively common and represent a variety of lesions including gallstones, cholesterol polyps, adenomyomatosis (ADM), and GB carcinoma. The most common disease is gallstones, affecting 10–15% of the adult population in the USA [1]. GB polyps have an estimated prevalence of approximately 5% in the global population [2][3][4], while GB carcinoma has an incidence of approximately 0.4 and 27 per 100,000 and in 100,000 people, respectively [5]. Northern India, Korea, Japan, and Central/Eastern Europe including Slovakia, Czech Republic, and Slovenia have also reported a higher prevalence than the worldwide average [6]. In contrast, GB carcinoma is rare in the western world (USA, UK, Canada, Australia, and New Zealand) [7].
Endoscopic ultrasound (EUS) has a high spatial resolution that can improve the diagnosis of GB polypoid lesions, GB wall thickness, and GB carcinoma staging. Vascularity can be evaluated using contrast-enhancing agents. Therefore, contrast-enhanced EUS may be useful for the differential diagnosis of GB lesions. However, the evidence of their effectiveness is still limited, and further studies are required in this area to establish its usefulness. EUS combined with fine-needle aspiration has played an increasing role in providing a histological diagnosis of GB tumors in addition to GB wall thickness. The role of EUS in the diagnosis of GB lesions has been demonstrated in many studies, and this review aims to summarize the role of EUS in the diagnosis of GB pathologies.

Several studies have evaluated EUS in the differential diagnosis of GB protuberant lesions [13][14][15][16][17][18][19][20]. The differential diagnosis for neoplastic and non-neoplastic lesions is based on size, number, morphology, surface contour, internal echotexture, and internal structure (Table 3). Among these findings, classifying them into pedunculated or sessile (broad-based) types is very important. Most pedunculated lesions are benign, and cholesterol polyps are the most common. Multiple polyps measuring ≤10 mm are highly likely to be cholesterol polyps [21]. However, malignant tumors are included in rare cases. These lesions are frequently incidental findings during abdominal examinations, and precisely distinguishing benign lesions from malignancies is important. EUS can visualize the layered structure of the GB and provide high-resolution images using high ultrasound frequencies. The characteristic findings of cholesterol polyps on EUS are a deeply notched granular surface and morular morphology. The internal echo is rough or granular, and highly echogenic punctiform foci reflecting cholesterolosis are visible (Figure 1) [16]. Peduncles are thin. Thus, they are often unobserved even on EUS [17]. Akatsu et al. [18] described the presence of hyperechoic spots, and multiple microcysts were important indicators of non-neoplastic lesions. Kimura et al. [15] described a granular contour, and a spotty internal echo pattern in the pedunculated polypoid lesions indicated benign pathology.

Figure 1. Cholesterol polyp. (a) EUS shows a cholesterol polyp as a granular-surfaced pedunculated lesion. The internal echo is heterogeneous with a hyperechoic spot (arrow). (b) Photograph of the gross pathologic specimen after cholecystectomy shows a yellowish polyp. (c) H-E stain of the specimen demonstrates an aggregation of foamy cells under the epithelium.
Table 3. EUS features of major GB protuberant lesions.
EUS shows an adenoma as a homogeneously isoechoic pedunculated or subpedunculated mass with a nodular or relatively smooth surface and an adenocarcinoma (pedunculated type) as a heterogeneously echogenic pedunculated mass with a nodular or smooth surface (Figure 2) [18][22]. Differentiation between adenomas and adenocarcinomas based on imaging is considered difficult. Thus, Cho et al. focused on relatively hypoechoic areas at the cores of the polyps, reporting the presence of such hypoechoic cores on EUS to be a strong predictive factor for neoplastic polyps. The overall accuracy of EUS in differentiating neoplastic from non-neoplastic lesions is 86.5–97% [13][16]. The accuracy of EUS in differentiating neoplastic from non-neoplastic polypoid lesions <10 mm was reported to be low [14]. Moreover, EUS is considered useful for guiding the treatment of larger pedunculated polyps [15].

Figure 2. Pedunculated GB carcinoma. (a) TUS image shows a relatively smooth surface, solid internal echogenicity polyp, but TUS does not depict the nature of the base of the lesion. (b) EUS image shows a pedunculated lesion. This lesion was GB adenocarcinoma with invasion depth pT1a (M) as a result of surgery.
EUS scoring systems have been proposed to differentiate between non-neoplastic and neoplastic GB protuberant lesions to aid diagnosis. Sadamoto et al. [23] reported the usefulness of an EUS score based on a coefficient of multivariate analysis: score = (maximum diameter in millimeter) + (internal echo pattern score; heterogeneous = 4, homogeneous = 0) + (hyperechoic spot score; present = −5, absence = 0). The sensitivity and specificity were 77.8% and 82.7%, respectively, in the differential diagnosis of neoplastic and non-neoplastic polyps using a cutoff score of >12. Choi et al. [24] have proposed another EUS scoring system for differential diagnosis of GB lesions between 5 and 15 mm based on layer structure, echo patterns, polyp margin, presence of a stalk, and the number of polyps. Moreover, the sensitivity and specificity were 81% and 86%, respectively, using a cutoff score of six.
Moreover, sessile lesions include localized ADM, carcinomas, and debris. Sessile GB carcinomas present with irregular internal echoes that are equal to or slightly hypoechoic to the liver parenchyma by EUS. Early GB carcinomas may be often accompanied by thickening of the inner hypoechoic layer around the main protuberant lesion [25][26].
EUS can visualize localized ADM as a sessile polypoid lesion with small cystic areas corresponding to the proliferation of Rokitansky–Aschoff sinuses (RAS; Figure 3) [18]. Comet tail artifacts are also occasionally observed owing to multipath reflection from RAS or intramural calculi. Several cases of GB carcinoma concomitant with ADM have been recently reported [27][28][29][30][31]. Therefore, the possibility of concomitant GB carcinoma with ADM in sessile lesions with multiple microcysts should be kept in mind. 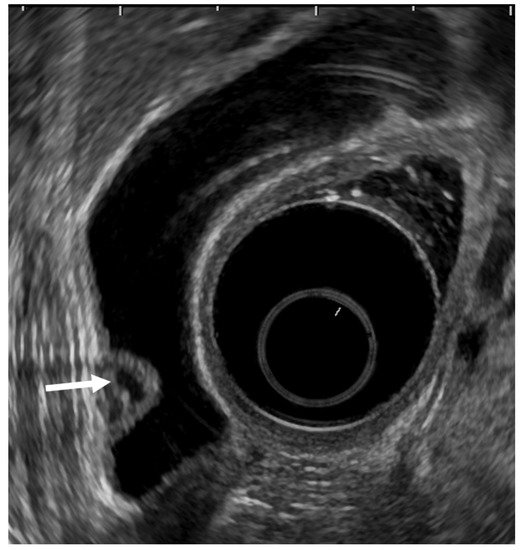 GB wall-thickening can be associated with a myriad of disorders. Therefore, GB wall-thickening poses difficulty in differentiating between benign processes (e.g., inflammation and malignant tumor). Thus, distinguishing early-stage cancer from benign wall-thickening of GB is important [32]. The contour of the lesion, patterns of wall thickness, intramural cystic space, and patterns of GB wall enhancement are used as differential points (Table 4). EUS can better define the characteristics of GB wall-thickening.
Table 4. EUS features of major GB wall-thickening lesions.
ADM can sometimes mimic GB carcinoma. The layers of a thickened GB wall are usually preserved in ADM, but there are microcysts with bright echoes arising from the cystic spaces. The thickened wall has a smooth surface but occasionally exhibits surface irregularity, reflecting hyperplastic changes. A key point in its diagnosis is the confirmation of the presence of cystic anechoic spots reflecting RAS inside the thickened wall (Figure 4) [17]. 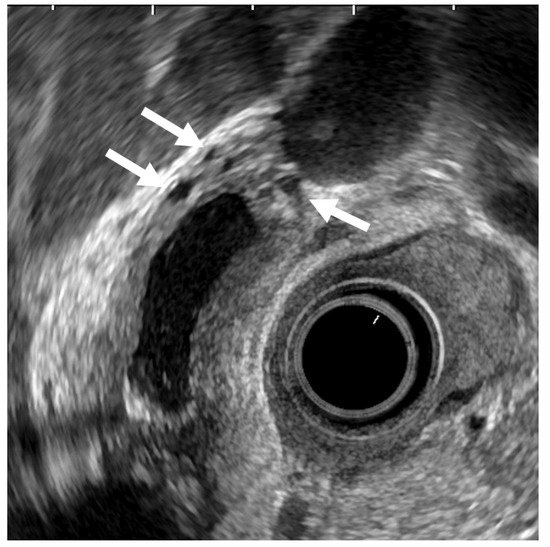 Figure 4. EUS image of ADM (diffuse type). The GB wall is diffusely thickened, and the layers of a thickened GB wall are preserved. Some anechoic areas (arrows) are visualized in the GB thickened wall.
Xanthogranulomatous cholecystitis (XGC) is an uncommon disease involving chronic GB inflammation. Its clinical presentation is like that of cholecystitis, making it very difficult to distinguish from GB carcinoma because of marked tissue-destructive changes. In addition, imaging findings resemble those of GB carcinomas. EUS can sometimes visualize hyperechoic nodules in the GB wall, probably representing XGC. However, differentiation between benign and malignant types based on EUS alone is frequently difficult [33]. A report also exists that EUS-FNA was useful for preoperative differential diagnosis between GB carcinoma and XGC [34].
Epithelial height is increased, cellular proliferative activity is accelerated, and a mechanism from hyperplasia to dysplasia and carcinoma is speculated in hyperplasia of the gallbladder mucous membrane accompanying anomalous pancreaticobiliary junction because anomalous pancreaticobiliary junction permits reflux of pancreatic juice into the bile duct. EUS can delineate abnormal connections between pancreatobiliary ducts as clearly as endoscopic retrograde cholangiopancreatography [35]. GB lesions should be suspected to be malignant when EUS shows abnormal connections between pancreatobiliary ducts (Figure 5).

Figure 5. GB carcinoma is associated with pancreaticobiliary maljunction without biliary dilatation. (a) EUS shows the bile duct (arrowhead) and main pancreatic duct (arrow) communicated inside the pancreas. (b) EUS shows the irregular GB wall-thickening on fundus without wall layer structure disruption. (c1,c2) H–E stain of the specimen demonstrates adenocarcinoma with tumor in situ stage.
Differentiation from GB ADM and chronic cholecystitis is problematic in wall-thickening-type GB carcinoma. However, the mucous membrane is irregular or papillated, thickened areas do not have a uniform thickness, and the layered structure is ill-defined in GB carcinoma. Furthermore, microcysts and comet tail artifacts reflecting RAS are usually not observed. Mizuguchi et al. [36] reported that the loss of multiple layer patterns of the GB wall demonstrated by EUS was the most specific finding in diagnosing GB carcinoma. Kim et al. [37] noted that EUS findings of GB wall thickness exceeding 10 mm and hypoechoic internal echogenicity as independent predictive factors for neoplasm. However, differentiating malignant lesions from benign GB wall-thickening remains difficult. 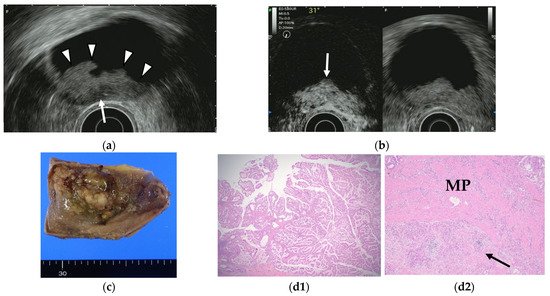 Figure 7. GB carcinoma. (a) Conventional EUS shows elevated lesions with conspicuous surface irregularities (arrowheads) observed in the gallbladder body. A hypoechoic region is observed in the deep part of the lesion (arrow), and the outer hyperechoic layer is also irregular, suggesting infiltration into the subserosal layer. (b) The contrast-enhanced harmonic EUS image after the injection of Sonazoid® shows that lesions in the gallbladder body (arrow) have a strong heterogeneous staining effect from the early stage of contrast enhancement. (Left contrast-enhanced harmonic mode, right B-mode) (c) Photograph of the gross pathologic specimen after cholecystectomy shows that the papillary neoplasm with a maximum diameter of 55 mm is found from the body to the bottom of the gallbladder. (d1,d2): H-E stain of the specimen demonstrates atypical epithelial cells grow papillary. Infiltration into the subserosal layer is observed in a part of the deep part of the tumor with infiltration and hyperplasia of poorly differentiated adenocarcinoma. (MP muscularis propria).
Table 6. The sensitivity and specificity on CH-EUS for the diagnosis of GB malignancy.
Another study by Imazu et al. [41] using contrast-enhanced EUS in the differential diagnosis of GB wall-thickening demonstrated inhomogeneous enhancement as a strong predictive factor of malignant GB wall-thickening (Figure 8). The same study reported that overall sensitivity, specificity, and accuracy for diagnosing malignant GB wall-thickening for EUS and contrast-enhanced EUS, respectively, were 83.3% versus 89.6%, 65% versus 98% (p < 0.001), and 73.1% versus 94.4% (p < 0.001).

Figure 8. EUS image of GB carcinoma. Irregular wall-thickening of the GB (arrowhead) is observed. In the conventional EUS image (right), a structure is found inside the GB and the lumen is unknown. The contrast-enhanced harmonic image 21 s after the injection of Sonazoid® (left) shows heterogeneous enhancement in the thickened wall (arrowhead). The structure inside the GB is not enhanced and can be diagnosed as biliary sludge (arrow) rather than a neoplasm.
Xue Liang and Xiang Jing [44] reported a meta-analysis of contrast-enhanced ultrasound and contrast-enhanced harmonic EUS (CH-EUS) for the diagnosis of GB malignancy. The pooled sensitivities of CH-EUS and specificities were 0.92 and 0.89 (Table 6), respectively, in this meta-analysis. On CH-EUS, the heterogeneous enhancement could be indicative of malignant lesions with a sensitivity and specificity of 0.94 and 0.92, respectively.
However, further accumulation of knowledge is desired because no large-scale study on contrast-enhanced harmonic EUS in GB diseases to date.