Submitted Successfully!
Thank you for your contribution! You can also upload a video entry related to this topic through the link below:
https://encyclopedia.pub/user/video_add?id=15039
Check Note
2000/2000
Communicative Spaces for Societal and Organisational Challenges
Edit

The current turbulent societies produce new society and organisation level challenges continuously. Communicative Spaces are concrete or virtual spaces where people conduct dialogues about significant large scope issues affecting their lives and make plans to overcome the constraints together. More details of the definition are given in Introduction and the following sections of Practical applications, General requirements and Potential outcomes.

A communicative space is created when societal or organisational issues are opened up for discussion and participants experience their interaction as fostering equal expressions of diverse views and a mutual understanding of what to do. [1] Among the prerequisites of a communicative space along the lines of its definition are the broad participation of all concerned and a structured discussion that is facilitated towards a joint agreement of concrete action steps by combining the different voices, coming from all power or other status positions. The process of combining different voices involves not only expressing one’s perspectives but hearing the others and learning from them in a dialogical manner. [2]

Communicative spaces, together with the two other elements, discussions among those concerned (for example applying Democratic Dialogue), and their active participation in creating feasible future plans (for example using Agency in Work Organisations), make a practical tool to respond to new challenges and to make changes (see Section 4, Figure 1. )

Dialogue Conferences, education programmes for adults, workplace meetings, and other participatory action research (PAR) based methods have been used to apply communicative spaces in meeting concrete societal and organisational challenges. The entry presented here is based on experiences of applying these methods in public sector work organisations adjusting to recession economy by new modes of operation. [3]

Often a vision based collaborative process allows the participants to gain new resources and create concrete action plans by pondering how the obstacles hindering the vision can be overcome. A Scandinavian example of a vision based collaborative process is Democratic Dialogue, that has been actively used as a workplace development method both in public sector work organisations and in private enterprises. [4] Although mainly community based, dialogical methods can be combined with individual based methods, for example in agency and identity work, if found relevant [5].

The specific type of communicative spaces to be applied varies due to the scope of the issues to be dealt with. In large scope societal challenges these requirements differ from those of organisational problems, but communicative spaces may be useful in both cases. The initiators of a process involving communicative spaces need also to be aware of the characteristics of the underlying decision-making processes. These factors have an impact on who should be invited to participate, what type of and how much organisational, social and economic resources are needed and allocated to find proper responses, and how communicative spaces will gain their legitimation.

In the public sector the basic challenge is how to cope with situations where there are more needs than resources. At the local government level, for example in Finnish municipalities, legitimation for communicative spaces requires a multi actor approach. Hierarchically above administrative, service and work organisations there is a political decision-making organisation that is elected by the citizens. Consequently, it is recommended that participants should represent municipal councils and boards, office holders in the municipal governments, professionals and other staff of the service sectors and citizens, as taxpayers, electors of the political decision-makers and clients. [3] [4] In a case of an adult education programme, the participants representing central, regional and local level governments were learning to act as change agents in confronting innovation demands. The legitimation for the process and authority needed to carry out the change ideas created during the education programme was gained by also involving the supervisors of the participants. They were invited to be present and commit themselves to dialogues in one education session. [3] In a case of clothing industry facing a need to adapt to major changes in international markets, communicative spaces were offered to multi actor groups, coming from various enterprises and representing all hierarchical and decision-making levels. The dialogues offered an opportunity to learn from others in two interaction levels, between enterprises and between individuals. [4] In the case of identity and agency work promoting professional agency there were communicative spaces for the individual participants and for the whole working communities as workplace meetings. [5]

Formal authority is needed to carry out action plans, but otherwise authority is used in a manner that does not disrupt the safety of a communicative space. When communicative space is experienced as a safe, also the participants who are not used to exercise their voice publicly will participate in dialogues and may in this way learn to enhance their agency. [3] According to Giddens (1984) [6] agency concerns events which an individual perpetrates, first in the sense that he/she could have acted differently, and second in that whatever happened would not have happened if that individual had not intervened. All the applications of communicative space require, by definition, that those concerned are allowed to participate and that they use that right. In concrete situations, for example in the middle of organisational changes or reforms of public sector service work, the conditions for agency in work organisations depend on knowledgeability of those concerned and their autonomy to act differently. [7]

All the outcomes, creating action plans together, gaining new resources through learning from others and enhancing agency, contribute to the overall quality of working life. A schema of application processes of communicative spaces, resulting in outcomes, is presented in Figure 1. 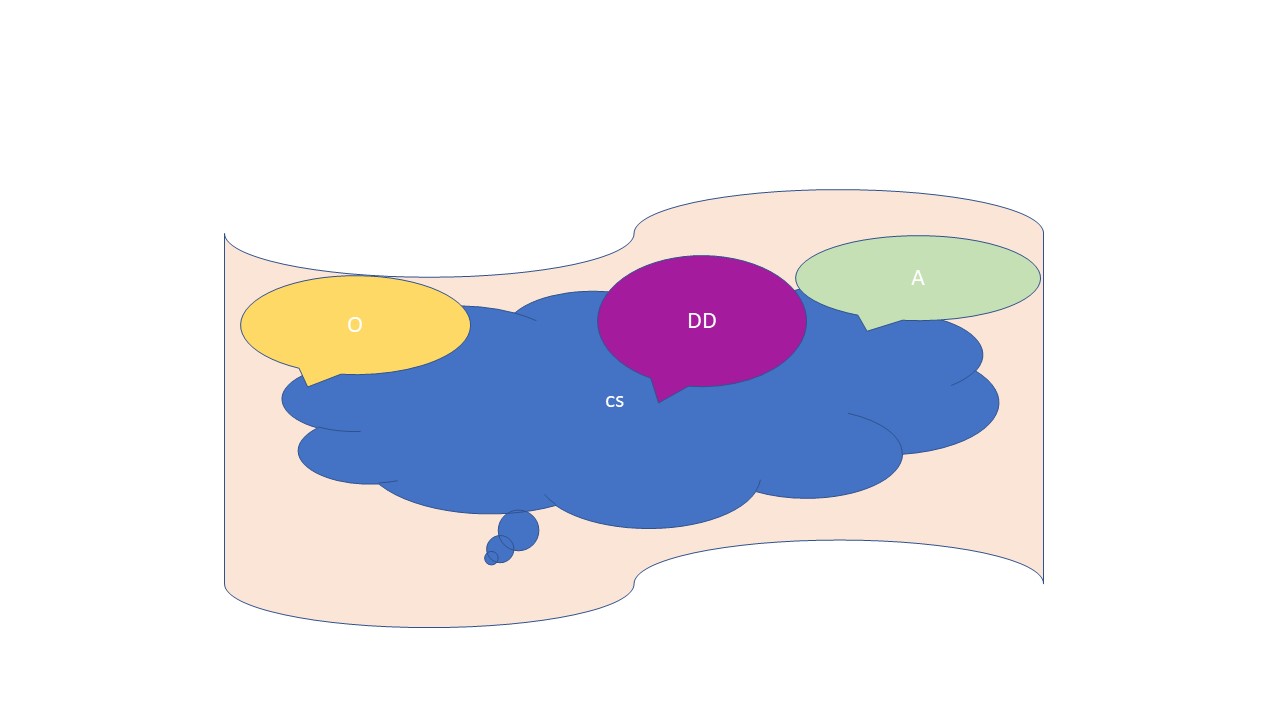 The dialogues may produce new ways to work, sometimes unexpected innovations. New information channels may be created and maintained when various participant groups meet on new dialogue forums and conduct new type of dialogues inspired by Democratic Dialogue. Also, those concerned may enhance both their individual and collective agency when learning both to use their voice and to listen to the others.

Dialogical methods have turned out to be malleable enough to be modified according to varying circumstances, provided that the dialogue starts from scratch, without any fixed preliminary solutions or change designs and that participants are prepared to use their agency. Communicative spaces are most often face-to face meetings and other gatherings, where dialogues are conducted. Also, on-line dialogues are possible, which broadens their applicability to issues crossing organisational and other borders. For example, sustainability issues offer a huge challenge for both face-to-face and on-line communicative spaces.