Submitted Successfully!
Thank you for your contribution! You can also upload a video entry related to this topic through the link below:
https://encyclopedia.pub/user/video_add?id=15035
Check Note
2000/2000
Intelligent Battery Systems
Edit
This entry is adapted from 10.3390/en14185989

Intelligent Battery Systems (IBSs) represent a promising but also a challenging approach to significantly improve the reliability, safety, and efficiency of Battery Electric Vehicles (BEVs). The essential features of Intelligent Battery Systems are the accurate and robust determination of cell individual states and the ability to control the current of each cell by reconfiguration. They enable high-level functions like fault diagnostics, multi-objective balancing strategies, multilevel inverters, and hybrid energy storage systems.

Alternative drive technologies, such as Battery Electric Vehicles (BEVs), have come into focus for a variety of reasons. As a consequence, intensive global research and engineering development is currently conducted in order to boost electromobility. A key element of the BEV drive train is the energy storage, commonly realized by a rechargeable battery system. As for the most promising storage technologies, lithium-ion (Li-ion) battery systems have been used almost exclusively in electric vehicles in recent years. The reason is that Li-ion batteries exhibit high power and energy density, long cycle-life, and low self-discharge when compared to other common battery technologies [1].
However, there are still drawbacks associated with this technology namely a short range, long charging times, high cost, and issues with safety and reliability. Multiple cells need to be connected in parallel and in series to fulfill performance requirements, as the individual cell’s power and capacity is limited. As shown by recent studies, the interconnection of many cells leads to inhomogeneities on system-level due to cell-to-cell variation [2][3][4][5][6]. Parameter inconsistencies originate from slight differences during the production processes. Variations even exist between identical, brand-new cells from the same batch [4] and increase during use [3]. This fact, in combination with a fixed multi-cell configuration, results in the weakest cell limiting the entire battery system [6]. To overcome these drawbacks, Reconfigurable Battery Systems (RBSs) incorporate switches which allow individual cells to be temporarily excluded from the current path. In addition, reconfiguration offers a great potential for continuous variation of the batteries’ voltage level, which results in Multilevel Inverters (MLIs). Controlling the current path by switches eventually enables the combination of different types of storage devices in Hybrid Battery Storage Systems (HBSSs).
Reconfiguration alone does not cancel the limitations of conventional battery systems if any cell’s state is unknown. Without this knowledge, reasonable operation of the switches is not possible in practice. However, in common battery systems, the states of each cell are rarely available due to multiple reasons. On the one hand, a large number of sensors and cabling efforts would be necessary; on the other hand, many relevant cell states such as the State of Charge (SOC) or the State of Health (SOH) cannot be measured directly. Thus, a significant effort has to be made in terms of monitoring the state of each battery cell.
The numerous challenges that arise from non-reconfigurable battery systems with unknown states of the individual cells are addressed by researchers and studies in various fields. An overview of the aspects of advanced monitoring and reconfiguration to solve the main challenges of automotive batteries is given in Figure 1. 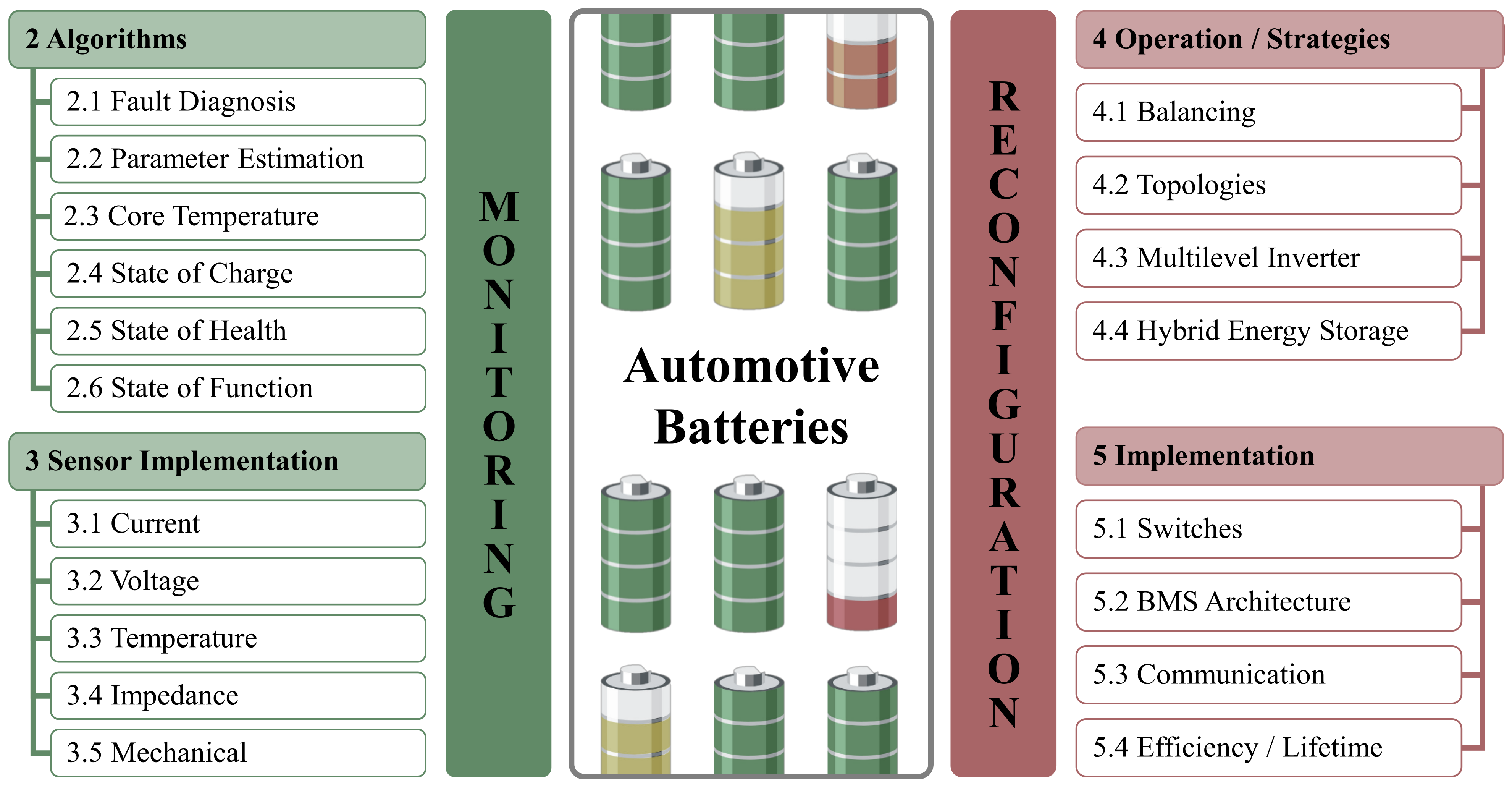 Figure 1. Overview of the aspects of advanced monitoring and reconfiguration to solve the main challenges of automotive batteries.
The implementation of sensor technology and reconfiguration is important, since the application of the advanced functionalities may require specific hardware but in any case an improved conceptualization on a system level. This is depicted in Figure 2 where schematically the switches for reconfiguration as well as possible sensor implementation and the necessary communication or Battery Management System (BMS) integration is shown. 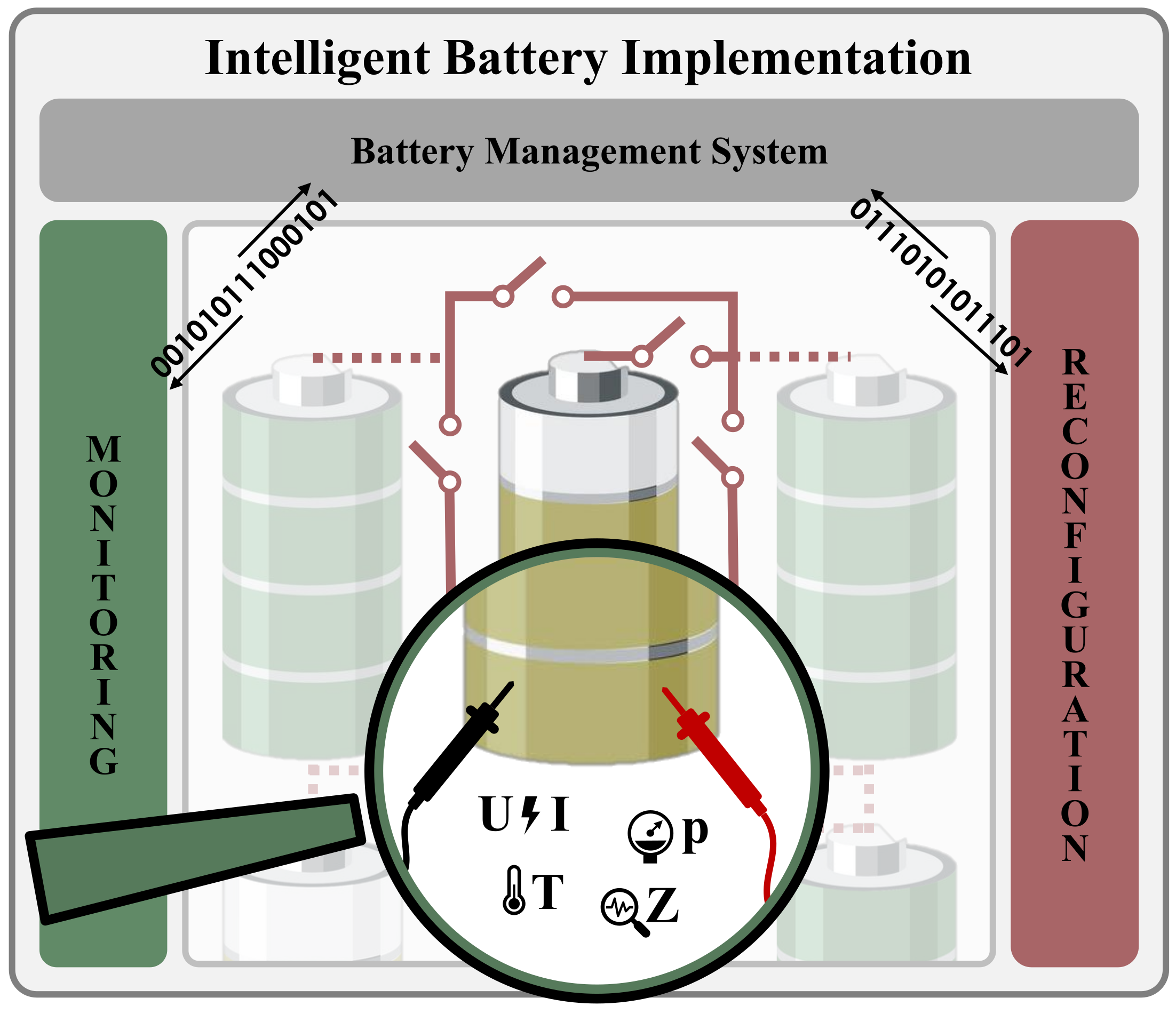 Figure 2. Schematic visualization of the aspects related to the implementation of intelligent battery systems with reconfiguration and advanced monitoring functionality.

Intelligent Battery Systems (IBSs), as a new technological advancement, represent a promising but also a challenging approach to significantly improve the reliability, safety, and efficiency of Battery Electric Vehicles (BEVs). Considering the reviewed scientific literature on the functionalities of IBSs, we conclude that, as an emerging technology, IBSs are in a rather early development stage and substantial improvement has to be achieved until a phase of technological maturity is reached.
In this regard, IBSs are a versatile area of research due to their prosperity of available sensor data and manifold control levers. Thereby, intelligent methods can be incorporated in many applications such as continuous adaptive control, aging adaptation, online parameter, and state estimation. In addition to vital operating parameters of individual cells, a reliable detection and localization of faults is also achievable. Therefore, the goal of future research related to fault diagnosis must be to bundle the detection of several different errors in a unified fault diagnosis function. Furthermore, in contrast to the well-established State of Charge determination, the existing State of Health monitoring functions must always adapt to the ongoing development of chemical compositions for lithium-ion batteries. This is a general challenge of battery systems. In the context of IBSs, it is an attractive option to use on-board Electrochemical Impedance Spectroscopy for monitoring the aging behavior. However, the hardware implementation for measuring the impedance in a BEV has not been solved yet. In the area of temperature estimation, a major step has already been taken with cell-specific temperature measurement using cell-dedicated hardware. From the economic point of view, algorithm- and model-based approaches for cell temperature estimation seem to be more attractive solutions than cell integrated temperature sensors at present. In general, the realization of IBSs with advanced sensing imposes severe requirements on size, cost, and energy consumption, which is only partly solved by today’s commercial sensor technology. Therefore, further research and development regarding simple and yet reliable sensors is encouraged.
With the incorporation of cell individual actuators (switches) into an IBS, a new degree of freedom for optimal and efficient operation is introduced. The resulting Reconfigurable Battery System is a mechatronic system, where intelligent operation strategies can be applied based on sensor data, advanced diagnosis, and overall energy demand. Simple topologies, such as half bridges, already enable basic functionalities such as Bad-Block-Management and balancing. However, when it comes to advanced reconfiguration applications such as Multilevel Inverters (MLIs) or Hybrid Battery Storage Systems, more complex topologies are favorable. The large number of emerging topologies suggests that a detailed analysis of the specific use case is required to be able to find the optimal micro- and macrotopology. For example, if an IBS enables AC output voltage by MLI functionality, external power electronics can be omitted. This in turn requires a topology that enables variable system voltage levels. However, the number of switches in the load path increases costs, losses, and the probability of failure. Moreover, the chosen topology directly affects the thermal interactions as well as the efficiency of the system. Therefore, appropriate semiconductor devices are required to replace the system level power electronics. In addition, the high frequency application of switching for MLIs requires a suited Battery Management System and communication architecture. In addition, finally, all algorithms and functionalities that are based on switching procedures must be coordinated for a functional operation strategy.
Despite the existing challenges, IBSs have the potential to significantly improve the battery systems of Electric Vehicles and provide sophisticated solutions to the many limitations and issues encountered with conventional battery systems. The next important step, besides the continuous development of the individual functionalities of advanced monitoring and Reconfigurable Battery Systems, is to examine the mutual effects of the many functionalities described in the literature to form a holistic concept of Intelligent Battery Systems for future generations of Electric Vehicles.

More
© Text is available under the terms and conditions of the Creative Commons Attribution (CC BY) license (http://creativecommons.org/licenses/by/4.0/)
Upload a video for this entry
Information
Subjects: Energy & Fuels
Contributor MDPI registered users' name will be linked to their SciProfiles pages. To register with us, please refer to https://encyclopedia.pub/register :
Simon Diehl
View Times: 42
Revisions: 2 times (View History)
Update Time: 15 Oct 2021
Table of Contents
1000/1000
Hot Most Recent