Submitted Successfully!
Thank you for your contribution! You can also upload a video entry related to this topic through the link below:
https://encyclopedia.pub/user/video_add?id=14986
Check Note
2000/2000
Dorsal Root Injury
Edit
This entry is adapted from 10.3390/cells10092185

Dorsal root injury results in regional loss of sensorimotor function, and often severe neuropathic pain. Studying pathophysiological mechanisms of dorsal root injury and the development of novel treatments for this condition may contribute to therapeutic progress also for direct injuries to the spinal cord.

Disorders that damage dorsal roots include compression, (e.g., from herniated disc), infections, autoimmune mechanisms, metabolic disorder, neurotoxic agents, and trauma. Clinically, the most important type of traumatic injury of the dorsal root is spinal root avulsion, a forceful, longitudinal traction of spinal nerve roots, interrupting their connections with the spinal cord. This condition may occur during complicated delivery, from a fall from a high height, or in a traffic accident, and most commonly affects spinal nerve roots innervating the upper extremity, i.e., brachial plexus avulsion.

Root avulsion injuries in experimental animals are typically performed by a surgical approach after exposure of the spinal cord and appropriate root entry regions to achieve standardized and reproducible lesions. However, in clinical root avulsion injuries, the forces that pull the roots from the spinal cord are usually exercised from outside the vertebral canal. The lesion is variable in location and extent of injury, and with possible differences in, for example, the consequences for the regional vascular supply. In terms of location, clinical avulsion injuries can occur distal (postganglionic injury) or proximal (preganglionic injury) to the dorsal root ganglia [1]. The postganglionic avulsion injury has the character of a peripheral nerve injury with the possibility for functional recovery, whereas a preganglionic avulsion injury is, in principle, a longitudinal injury of the spinal cord at the entry of spinal nerve roots, and thus provides similar therapeutic challenges as other spinal cord injuries [2]. 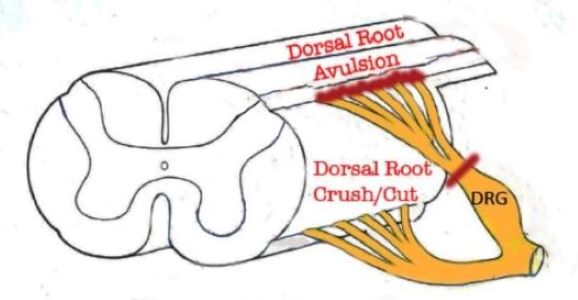 Axotomy (crushing or cutting) of the dorsal root in its peripheral compartment allows investigation of how axonal extension can be promoted, first along with Schwann cells, and thereafter when encountering central glia, which reacts to the injury at a distance, i.e., without damage to the spinal cord itself. On the other hand, the most centrally located dorsal root injury, dorsal root avulsion, will damage the DREZ, including its central glial component, and thereby constitute a true CNS injury, but isolated to the dorsal root axons and their immediate surroundings [2]. In this brief entry, we describe how DREZ becomes a barrier for axonal ingrowth, give examples of previous and current research exploring how to overcome this barrier in the adult nervous system, and how future spinal cord injury research can benefit from using dorsal root injury models.

An appropriate cell body response, comprising a set of so-called regeneration associated genes (RAGs) [5], combined with the emergence of growth supportive axon-glial interactions at the injury site and during axonal elongation, are fundamental for successful nerve regeneration. Axotomy of dorsal root axons results in a much weaker regenerative response by the sensory neurons than what follows after injury to their peripheral branch. Rodent regenerating dorsal root axons grow with a rate of ca 1 mm/24 h compared to ca 3 mm/24 h for injured peripheral nerve axons [6] and fail to display the molecular modifications that is typical after peripheral nerve injury [7][8][9]. Furthermore, injured dorsal root axons have limited ability to grow for long distances even in a peripheral nerve environment [10][11] unless actions to enhance their intrinsic regenerative potential are taken.

Interventions, e.g., the use of growth factors or cell-based approaches to promote regeneration of dorsal root axons, are likely to result in differential effects depending on neuronal subtype-specific growth factor receptor pattern and cell-matrix interactions signaling systems.

The potential of DRG neurons to mount an efficient regenerative response after dorsal root injury is shown by a so-called conditioning lesion, i.e., an injury to the peripheral sensory axons. This intervention, which is typically performed one to two weeks prior to injury to the central processes of the same sensory neurons induces RAGs in DRG neurons and stimulates growth supportive interactions between dorsal root axons and associated non-neuronal cells, thereby promoting elongation of injured dorsal root axons [12]. The conditioning lesion paradigm has made a significant contribution to our understanding of regeneration failure after injury to primary sensory axons.

Growth factor-mediated growth of dorsal root axons appears to act on intracellular pathways, which at least in part share those implicated in the conditioning lesion response [13], although simultaneous effects on non-neuronal cells at the DREZ may also occur [14]. Importantly, there appears to be a limited time window for neurotrophin-mediated entry of regenerating dorsal root axons since just a short delay of treatment fails to support spinal cord ingrowth [15]. This emphasizes the desire to initiate growth supportive therapy as soon as possible. Dorsal root injury is quite favorable for addressing this aspect.

3. Overcoming Growth Inhibition at the DREZ

Previous studies reported that a conditioning lesion combined with enzymatic degradation of chondroitinase sulfate proteoglycans with chondroitinase ABC [16], their removal through gene deletion [17], blocking Nogo-receptor function [18][19], or integrin activation [20] allow regeneration of injured dorsal root axons into the spinal cord. However, recent experiments indicate that a conditioning lesion in combination with proteoglycan degradation or blocking myelin-associated inhibitors is not sufficient in this context, and that specific growth factor stimulation, in this specific case with GDNF, is required for sensory axon entry and functional recovery [21]. This finding indicates that the mechanisms which prevent spinal cord ingrowth by injured dorsal root axons are still far from clear and need further investigations.

The limited effect on sensory axon spinal cord ingrowth by pharmacological interventions targeting the DREZ may be related to the observation that regenerating sensory axons form synapse-like contacts with non-neuronal cells, possibly NG2-positive glia, rather than traversing the PNS-CNS boundary and enter the spinal cord [22][23][24][25]. This process resembles the appearance of synapse-like connections between injured sensory axons in the dorsal column and NG2 positive glia [26]. Thus, NG2+ glia may provide cues for establishing contacts with regenerating dorsal root axons, perhaps originating from specific sensory neurons. To identify these cues in detail and apply counteracting interventions may contribute to functional dorsal root axon regeneration.

During Wallerian degeneration of peripheral nerves, Schwann cells in cooperation with fibroblasts and immune cells, clear disintegrating axons and myelin in preparation for a growth permissive pathway for axon regeneration. In contrast, myelin debris arising from Wallerian degeneration in the central nervous system remains for long periods of time [27][28]. In humans, residues of degenerating myelin have been observed decades after spinal cord injury. These residues and the associated cellular reactions appear to hamper axonal growth. To speed up myelin clearance in the injured spinal cord is thus a relevant objective for promoting spinal cord injury repair. This issue can be favorably explored after dorsal root injury, which allows examination of myelin degradation and elimination in the spinal cord dorsal column without direct damage to the spinal cord, leaving its vascular supply and tissue architecture essentially unaffected.

The long-term lingering of myelin debris after spinal cord injury is probably the result of an insufficient activation of the macrophage/microglial program required for rapid and complete myelin degradation [29][30][31]. Toll-like receptor signaling mediates myelin phagocytosis [32][33], whereas beta-amyloid precursor clearing enzyme (BACE)1 [34][35], and signal regulatory protein-α (SIRPα) [36] delays this process. These findings provide options for approaches for rapid elimination of myelin debris and, hence, possibly minimize one obstacle for sensory axon extension across the DREZ.

Cell-based bridges, acellular bridges, and their combinations are attractive strategies for the repair of the spinal cord and dorsal root injury. The overall purpose of these strategies is to promote functional recovery by (i) survival/growth support for intrinsic cells,(ii) disease modification to facilitate endogenous repair, and (iii) replacement of lost cells or introduction of relay cells. The implementation of these strategies for spinal cord injury is discussed by Guo [37]. Lin et al. analyze how stem cells and biomimetic material for spinal cord repair interact with the human immune system [38], and Rodríguez-Barrera addresses the potential of recruitment from endogenous stem cells of cells for spinal cord injury repair [39]. Here, we discuss bridges aimed to promote functional growth of injured dorsal root axons into the spinal cord.

Early studies aimed to provide a bridge for regenerating dorsal root axons into the spinal cord by exploiting, for example, Schwann cells [40], or activated macrophages [41], both types of cells which cooperate in peripheral nerve regeneration. These attempts were not successful, however; Schwann cells do not readily integrate into a CNS environment [42][43][44], and activated macrophages in a CNS environment tend to induce axonal retraction rather than extension [45].

Olfactory ensheathing cells (OECs) are CNS glia, ensheathing non-myelinated olfactory nerve axons in the intact nervous system, and able to serve as a cellular substrate for regenerating axons. OEC implants readily integrate into non-olfactory CNS regions and have been shown to be able to provide a pathway for sensory axon growth into the spinal cord and restore sensorimotor function after spinal root avulsion [46].

Figure 2.  Two possible alternative to implant stem cells at the DREZ. Left: stem cells implanted to faciliate ingrowth of injured sensory axons. Right: stem cells are used to create a neuronal relay where sensory axons are making synaptic contact with implanted stem cells, which, in turn, project their axons into the spinal cord.

In addition, to provide growth-supporting substrate, OEC or stem cell implants are likely to release growth supportive agents and presumably modify immune responses in a way that does not antagonize sensory axon growth across the DREZ. Clarifying the mechanisms underlying these approaches and explore the way to improve their efficiency is thus likely to contribute to the exploitation of cell-based therapies in direct spinal cord injury, e.g., by the administration of exosomes containing defined growth supporting and/or disease-modifying components[37][48].

Dorsal root injury offers attractive experimental models to determine key mechanisms in regeneration failure after spinal cord injury, and how to develop novel therapeutic strategies for spinal cord repair, Dorsal root avulsion constitutes a longitudinal spinal cord injury, and is therefore of particular relevance in the broader context of spinal cord injury. A successful strategy to tackle dorsal root avulsion injury most likely requires a combinatorial approach, applied in an appropriate spatial and temporal manner, might include the following actions. i) Cell-based approaches, e.g. via exosomes derived from primed stem cells, or as bioprinted constructs, may be suitable for promoting tissue repair at the injury site., as well as for creating pathways across the DREZ. ii) Intrathecal administration of agents that specifically counteract non-neuronal axon growth inhibitors at the DREZ, as well as along ascending sensory pathways are likely to be needed as additive measures. iii) Application of gene regulatory tools to initiate and maintain axonal growth by  dorsal root ganglion neurons. The dorsal root-spinal cord unit provides a favorable platform for assessing the outcome of these interventions as single or combined therapies.

More
© Text is available under the terms and conditions of the Creative Commons Attribution (CC BY) license (http://creativecommons.org/licenses/by/4.0/)
Upload a video for this entry
Information
Subjects: Cell Biology
Contributor MDPI registered users' name will be linked to their SciProfiles pages. To register with us, please refer to https://encyclopedia.pub/register :
Hakan Aldskogius
View Times: 532
Revisions: 2 times (View History)
Update Time: 13 Oct 2021
Table of Contents
1000/1000
Hot Most Recent