Submitted Successfully!
Thank you for your contribution! You can also upload a video entry related to this topic through the link below:
https://encyclopedia.pub/user/video_add?id=14906
Check Note
2000/2000
Pre-Breeding for Biotic Resistance
Edit
Upload a video
This entry is adapted from 10.3390/plants10102022

Genes and markers involved in resistance to biotic stress can be divided into two categories. The first is involved in pathogen recognition (e.g., RGA genes, resistance gene analogues), while the other is more involved in defense responses (e.g., DGA genes or defense gene analogues). The best-studied RGAs are leucine-rich repeats of nucleotide binding sites, kinase receptor-like proteins, pentatricopeptide repeats, and apoplastic peroxidases.

Forecasting tree responses to climate change has typically considered shifts in their phenology and geographic distribution in the face of changing abiotic pressures. However, biotic interactions may equally be altered by niche decoupling [1], in turn affecting tree populations’ adaptive and migration potentials [2]. Therefore, better and more integrative predictions require comprehensively assessing whether antagonistic and facilitated biotic interactions may be enhanced, maintained, or decoupled as a result of environmental fluctuations [3][4]. Otherwise, key forest services, both ecological (i.e., resources of biodiversity) and industrial (i.e., renewable materials such as wood, cellulose for the pulp industry, and lignin and hemicelluloses for energy production), may be jeopardized [5].
Fluctuating biotic interactions due to antagonistic biota such as pathogens, insect pests, and weeds are responsible for yield losses ranging from 17.2% up to 30.0% in major food crops [6]. Although studied to a lesser extent, the forestry sector presumably exhibits similar losses [7]. Despite the lack of explicit comprehensive assessments for forest trees, the effect of altered biotic stresses on forests must not be downplayed [8].
The pace at which climatic threats may be altering biotic interactions urges intensifying novel experimental and analytical approaches to better comprehend the effect on the plant disease triangle (PDT). PDT postulates that any plant disease is the result of the interaction between a host’s genotype, the biotic stress, and their environment [9]. Genomic prediction, machine learning, and gene editing strategies, although usually disentangled, offer powerful opportunities for trans-disciplinary and emergent inferences at the interface among the fields of forest genomics, pathology, and ecology [10].
Therefore, this review article aims to highlight major ecological evolutionary genomics’ tools to assist identification, conservation, and pre-breeding of biotic resistance in forest trees. Specifically, our first goal is to summarize the main trends when exploring the genomic basis (i.e., architecture) of biotic stress resistance in forest tree species, by wondering whether resistance types segregate as major Mendelian loci, a prediction from the Fisherian runaway [11] pathogen–host concerted arms-race [12] evolutionary model [13], or exhibit polygenic signatures across various phases of stress perception, signal amplification, and downstream responses. As a second goal, we aim to outline an integrative pipeline to detect and harness natural tree adaptation and pre-breeding for resistance to biotic stresses [14]. Powering integrative studies will enable a better understanding of climate change effects on forest trees’ responses to biotic stresses.

Tree pre-breeding requires an interdisciplinary approach [15] to speed up breeding cycles and increase selection accuracy in the face of jeopardizing climate change effects [16]. Such intersection (Figure 1) must happen among pathologists, botanists, ecologists, ecophysiologists, geneticists, biometeorologists, dendrologists, paleoecologists, and phylogeographers. DNA variation studies must not be disconnected from ecologically relevant trait variation in provenance trials, capable of revealing pre-adaptations to naturally high incidence of pathogenic fungi in humid niches, and insects that threaten the diversity of trees worldwide [17]. 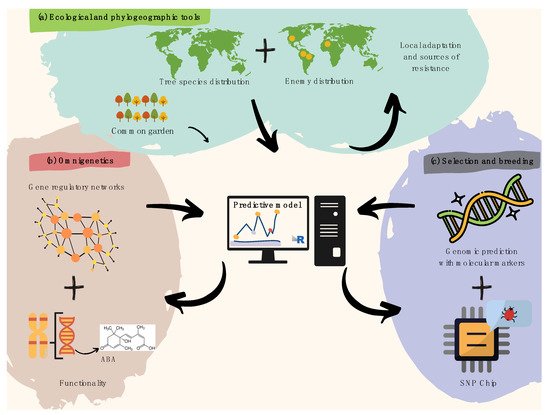 Figure 1. Recommendations for harnessing pre-breeding in forest tree pathology. (a) Spatial modeling of plant species and overlapping infectious agents is useful to identify resistance hotspots and pre-adaptations, later validated by common garden trials. (b) Gene regulatory networks (i.e., omnigenetics) enable to better explain the missing heritability in biotic resistance traits (diagram above within the pink bubble), while understanding trans-generational epigenetic inheritance as well as the metabolic bases for resistance (diagram below within the pink bubble). The diagram above functionality refers to a hypothetical example on metabolic pathways (e.g., biosynthesis of abscisic acid). (c) A last step aiming to search for molecular markers involved in attack and defense processes can further leverage pre-breeding for forest pathology via integrative predictive modeling of polygenic breeding values (diagram above within the purple bubble), which can easily be scalable using targeted genotyping SNP arrays/chips (diagram below within the purple bubble).

In recent years, there has been increasing interest in merging several disciplines to gather more cohesive inferences in the field of forest genetics [18]. For instance, molecular genetics has successfully coupled with the field of ecological biogeography and landscape ecology [19] to better understand the adaptive equilibrium between tree populations, and the niches where they occur [20]. This innovation has in turn informed potential long-term evolutionary responses [21].
The impact of pests and diseases on the distribution of forest trees, and their regeneration mechanisms [22], has been suggested as one of the main explanations for the high diversity of species in tropical forests [23]. Consequently, this hotspot is a valuable reservoir for sources of resistance. A better interaction between the fields of tree pre-breeding and phylogeography will allow a more comprehensive reconstruction of the ecological drivers, including antagonistic biotic interactions, of today’s diversity [7]. A first step in this regard requires mapping the geographical distributions of genealogical lineages across heterogeneous landscapes, for both pests and hosts (Figure 2a). The extent of overlap among trees and pathogens’ geographical distributions can then be used as a proxy to infer the likelihood for concerted evolution [24], and potential pre-adaptations [25]. Within this framework, evolutionary genetics may also offer promising avenues because it specifically deals with the mechanisms that explain the existence and maintenance of genetic variation across traits. While joint species distribution modeling prospectively informs the magnitude of biotic interactions at regional scales [23], multi-locality common garden (i.e., provenance trials), and clonal trials with trans-located biotic treatments, can in turn illuminate the other end of the spectrum [26]. Controlled reciprocal trials may offer a more mechanistic understanding of the ecological genomics of co-evolutionary interactions at local-scales [27].

Local adaptation conceptualizes the trend that local populations tend to have a higher average fitness in their native environment than in other environments, or when compared with foreign introduced populations [28]. Despite this, local adaptation [29] has typically been over-simplified as driven by abiotic [30] heterogenetic interactions [31]. Until now, biotic interactions are starting to be recognized as major drivers, too [32]. Yet, one of the key challenges that remain in the study of local adaptation is to explore its genomic basis [23], either via loci exhibiting antagonistic pleiotropy or conditional neutrality [33]. These ecological and phylogeographic trends must be interpreted in the light of interacting gene networks (i.e., omnigenetics approach [34], Figure 1b).
Attempts to identify candidate genes of adaptive importance, and to relate genetic variation in these genes to phenotypic expressions in multi-locality field trials, have typically been hampered by a complex polygenic architecture [35], and a limited understanding of the physiological trade-offs [23]. For instance, theoretical expectations dictate that local selection at a single locus will promote local adaptation in the absence of gene flow (i.e., selection–migration balance [28]). However, more complex polygenic quantitative adaptation can even be established and maintained in the presence of high gene flow [36]. While the discipline of molecular quantitative tree genetics [37] merges with the field of ‘big data’ analytics [38], an expanded view of complex traits is arising, moving from a polygenic framework to a view in which all genes are liable to affect adaptation to biotic stresses (the omnigenic model described above, Figure 2b [34]), so that most heritability can be explained by the effects of rare variants, their second order epistatic interactions, and with epigenetic factors, even accounting in this way for transgenerational epigenetic inheritance [39]. However, looking back, the metabolic basis of tree evolution still has the potential to improve plantations’ yields because natural selection has tested more options than humans ever will. Mining the molecular footprint of selection and adaptation from in situ sampling for tree pre-breeding and climate adaptation will benefit from bridging the gap between phenotyping and genotyping across provenances, and the more deterministic quantitative and population genetic models.
A useful type of polygenic model, yet to be calibrated within an omnigenic framework [34], is genomic prediction (GP) [40]. Predictive breeding via GP allows assessing genetic estimated values (GEVs) for biotic stress resistance [41]. GP uses historical resistance data to calibrate marker-based infinitesimal additive predictive models [42], which provide a more comprehensive representation of a quantitative polygenic trait than traditional genetic mapping [43], a tendency that several biotic resistances have started exhibiting [44]. Therefore, GP offers a key path to assist the introgression breeding of biotic stress resistance from key donors (via genomic-assisted recurrent backcrosses—GABC, as successfully applied in the breeding program for blight resistant in American chestnut trees [45]). GP’s predictive ability can be significantly enhanced after performing a priori weighted resistance mapping through more conventional methods such as quantitative-trait loci (QTL) mapping or genome-wide association studies (GWAS) [46]. These mapping strategies enable choosing target SNP arrays for high throughput genotyping of multi-parental populations [47] via SNP-Chips (Figure 1c).
GP may also go beyond pre-breeding efforts, and feedback on restoration optimization [48] and provenance characterization [49] (e.g., by predicting biotic resistance and yield) even across thousands of half-sib families that could hardly be tested at once in field and lab trials for pests and herbivore resistance [50]. Expectations within these half-sib families are likely similar to the ones previously discussed, which are as follows: (i) a nascent trend towards a more polygenetic architecture of the resistance, and (ii) the occurrence of pleiotropic genes in response to multiple biotic stresses despite the apparent absence of phenotypic correlations in the components of resistance [41].

Genetic drift refers to random allelic fluctuations within genepools [51]. It is typically a consequence of limited population size and rampant selection, and thus becomes stronger in secluded hosts and pathogens’ populations. Rare alleles are likely to disappear completely from populations, while previously polymorphic loci might become fixed. Remarkably, in some cases, pathogens may overcome natural genetic drift by utilizing genetic elements from their host as a way to develop resistance to plant defenses. For instance, whitefly, through a horizontal gene transfer event, acquired the plant-derived phenolic glycoside malonyltransferase gene (BtPMaT1), which allows whiteflies to neutralize phenolic glycosides [52].
On the other hand, modern CRISPR/Cas9 gene editing technology is capable of modifying the immune response function in eukaryotic cells via a highly specific RNA-guided complex [53]. This technology has broad applications in all biological fields, including tree pathology [54]. Bottlenecks are the availability of fine-mapped candidate genes for resistance with major effects, in vitro protocols for tissue culture, and legal regulation [55]. Still, the prospect for gene editing remains open. Interestingly, coupling gene editing with selfish elements in Mendelian segregation distortion due to meiotic drive [56] may efficiently introgress resistance at the population level [57] in a snowball manner [58]. Although promising, combining gene editing with gene drives remains speculative because factual trajectories may prove undesired.

Joint research efforts to study more systematically the genomics of forest pathology across the enviromics continuum must be envisioned [59]. At the genomic and breeding level, similar initiatives already exist, such as the European EVOLTREE consortium (http://www.evoltree.eu/, accessed on 16 September 2021), and North Carolina State University’s Central America and Mexico Coniferous Resources Cooperative (CAMCORE, https://camcore.cnr.ncsu.edu/, accessed on 16 September 2021) a not-for-profit international tree breeding organization partnered with private companies in the forestry sector around the world. Both alliances may serve as inspiration to build a stronger networking around breeding for biotic resistance in forest trees. Ultimately, promoting more of these partnership efforts will enhance multi-locality trials and data sharing among countries [60], while improving the understanding of the dynamics of co-evolutionary antagonistic interactions in forest ecosystems through genomic, ecological, and evolutionary studies.

More
© Text is available under the terms and conditions of the Creative Commons Attribution (CC BY) license (http://creativecommons.org/licenses/by/4.0/)
Upload a video for this entry
Information
Subjects: Forestry
Contributor MDPI registered users' name will be linked to their SciProfiles pages. To register with us, please refer to https://encyclopedia.pub/register :
Andrés J. Cortés
View Times: 64
Revisions: 2 times (View History)
Update Time: 09 Oct 2021
Table of Contents
1000/1000
Hot Most Recent