Submitted Successfully!
Thank you for your contribution! You can also upload a video entry related to this topic through the link below:
https://encyclopedia.pub/user/video_add?id=14776
Check Note
2000/2000
Antimutagenic Plants of Saudi Arabia
Edit
Upload a video
This entry is adapted from 10.3390/app11188494

Mutagenic complications can cause disease in both present as well as future generations. The disorders are caused by exogenous and endogenous agents that damage DNA beyond the normal repair mechanism. Rapid industrialization and the population explosion have contributed immensely to changes in the environment, leading to unavoidable exposure to mutagens in our daily life.

The alteration of DNA leading to a heritable change in the nucleotide sequence is called mutation. The agents that cause these alterations are referred to as mutagens and are derived from sources of endogenous and exogenous origin [1]. Some of the important endogenous reactions that cause the production of mutagens include oxidation, methylation, deamination, and depurination. Although the body has mechanisms to repair damaged DNA, oxidative damages are not perfectly repaired, leading to mutations [2].

The mutagens derived from exogenous sources include food products, environmental pollutants, drugs, pesticides, viruses, and irradiation [1]. The human diet is known to contain a great variety of natural mutagens and carcinogens. Some of the important food mutagens identified are pyrrolizidine alkaloids, polycyclic aromatics, aflatoxins, nitrosamines, and heterocyclic amines [3][4].

Mutations can be classified as genomic, point and chromosomal. Genomic mutations refer to changes in the number of chromosomes, such as loss or gain of a single chromosome. Point mutation means changes in the nucleotide sequence in one or a few codons and includes base substitution (one base is substituted by another), deletion or addition of one or more bases from one or more codons [5]. If additions or deletions change the reading frame of the DNA then they are known as frameshift mutations. Chromosomal mutations are identified as morphological alterations in the gross structure of chromosomes and are analysed by microscopic examination of cells at metaphase [6].

The end-results of mutation can be observed in both germ cells and somatic cells. If germ cells are mutated, then the disorders are related to point and chromosomal mutations. Germ cell mutations are reported to cause genetic disorders such as Klinefelter’s syndrome, Down ’s syndrome, Edward’s syndrome [5][7]. On the other hand, somatic mutation is known to be the major cause of carcinogenesis. In addition, somatic mutation can also cause diabetes, neurological disorders, heart ailments, and aging [8]. Further, lifestyle parameters such as cigarette smoking, alcohol intake and inadequate physical activity have been reported to amplify the deleterious effects of mutation [8][9].

2. What Is the Role of Antioxidants in Mutagenic Complications?

According to the literature, SOD is a family of enzymes containing metallic ions and they convert O 2•− to H 2O 2 [11]. The enzyme can be found practically in all aerobic life-forms and can be classified into four families; Cu-SOD, Cu-Zn-SOD, Mn-SOD, and Fe-SOD. The Cu-Zn-SOD enzyme is the human form of SOD [12]. O 2•− is the only known substrate for SOD and the enzyme reacts by taking its electron. The enzyme is produced in response to oxidative stress. SOD can be identified in a huge number of tissues and organisms and is found to defend cells from harmful effects caused by O 2•− . SOD catalyzes the conversion of O 2•− to H 2O 2 in biological systems, and the enzyme works in combination with H 2O 2-removing enzymes, such as CAT and GPx [13].

CAT, another abundant enzyme, catalyses the breakdown of hydrogen peroxide into water and oxygen. CAT, a heme-containing proteins is localized primarily in mitochondria and in sub-cellular respiratory organelles. One of the first lines of defence against oxidative stress is the GPx enzyme, and it requires glutathione as a cofactor. GPx is found to catalyse the oxidation of GSH to GSSH at the cost of H 2O 2. GPx is also reported to contend with CAT for H 2O 2 as a substrate and is the chief defence against small levels of oxidative stress. Chemically, glutathione is a tripeptide and is considered as the major thiol antioxidant. It is one of the components of the intracellular non-enzymatic antioxidant system. GSH is abundant in the cytosol, nuclei and mitochondria and is the key water-soluble antioxidant in these cellular compartments [14].

The reduced type of glutathione is known as GSH, and the oxidized form is called GSSH (glutathione disulphide). The oxidized form of glutathione will remain within the cells and the ratio of GSH/GSSH is considered to be an excellent measure of oxidative stress. Extremely high concentrations of oxidized glutathione are found to damage many enzymes oxidatively. On the other hand, glutathione reductase catalyses the NADPH dependent reduction of oxidized glutathione, serving to preserve intracellular glutathione supplies and favouring the redox position [15]. In addition to these enzymes, estimation of malondialdehyde is also believed to be a pointer of oxidative stress. Malondialdehyde is one of the end products of lipid peroxidation known as a thiobarbituric acid reactive substance (TBARS) [16].

3. What Are the Strategies for Minimizing Mutagenic Complications?

The literature suggests that methods by which the anti-mutagens wield their effects are complex and often involve multiple activities. The important activities reported for dietary and endogenous antioxidants include pharmacokinetic alterations in absorption, protein binding, metabolism (detoxification), activation of mutagens and DNA repair processes [17]. Interference with the P450-dependent biotransformation of mutagens is one of the most specific mechanisms by which dietary components exert their effects [18].

Some of the known antioxidants, such as vitamins, have been reported to reduce DNA damage. Their action involves breaking down a chain of events essential for mutagenesis and can contribute to DNA repair mechanisms [10]. According to literature, one of the main damaging intracellular ROS is hydroxyl radical (•OH) and vitamin E has reduced H 2O 2-induced • OH production and successive DNA base pair adjustment in host cells. Vitamin E is also reported to provide an inhibitory effect against the peroxynitrite mediated DNA damage that is produced by immune cells during inflammation [19].

In addition to this, Vitamin E administration during radiation therapy to bone marrow polychromatic erythrocytes, reduced oxidative stress-induced micronucleus development. These inhibitory effects were reportedly due to the antioxidant potential as well as the modulation of DNA repair structures and exclusion of damaged DNA from host cells [20]. In another study, it was observed that Vitamin A or retinol exhibited antimutagenic activity due to its antioxidant properties. It was found to attenuate the oxidative stress-induced DNA defects produced by benzo (a) pyrene, cyclophosphamide, aflatoxin B and 3-methyl cholanthrene. Furthermore, the anti-mutagenic effects of vitamin A were also reported against N-nitrosoamine compounds, quinoline derivatives, methyl methane sulfonate (MMS) and bovine papilloma virus. The methods used to identify the anti-mutagenic property were DNA fragments, sister-chromatid exchanges, micronuclei frequency and chromosomal aberrations in different types of rodent cells [21]. Retinol, a known dietary antioxidant, exhibited these effects by scavenging the chemical mutagens and their metabolites. In addition, other mechanisms suggested for anti-mutagenic activity include DNA repair, prevention of conversion of oncogenic metabolites, and enhanced elimination of chemical mutagens [22]. Further, the deficiency of vitamin A in some patients has been associated with higher incidences of breast cancer [23].

The research conducted on vitamin C/ascorbic acid suggests that it possesses antioxidant properties against a variety of free radicals such as ONOO-, NO 2, NO and hypochlorous acid. Vitamin C has been tested extensively against mutagenic difficulties induced by oxidative stress and was shown to mitigate the changes induced by gamma-irradiation [24]. In addition, vitamin C supplementation was found to rejuvenate other antioxidants such as glutathione and carotenes. The ability of vitamin C to prevent mutagenic complications has been linked to reduced chances of carcinogenesis [25].

4. Which Are the Medicinal Plants of Saudi Arabia That Might Demonstrate Anti-Mutagenesis?

Saudi Arabia is known as one of the oldest human habitats. The vast regions of the country are known to contain several varieties of plant. Different provinces of Saudi Arabia have different climatic conditions that support the growth of several rare categories of fauna and flora [26]. Traditionally, the population of the country has used plant-based medicine for treating various conditions, such as pain, inflammation, ulcers, helminthiasis, bronchoconstriction, depression, anaemia, and dysmenorrhoea [27]. These drugs are commonly referred to in the Arabian Peninsula as ‘prophetic’ medicines. The therapeutic activities of some of them, like black seeds, costus, miswak, and fenugreek, have been proven by scientific studies. However, many others are yet to be documented with supporting evidence [28].
Traditional medicines derived from natural resources are typically devoid of major side effects and are cost-effective. The Arabian Peninsula comprises Saudi Arabia, Kuwait, Bahrain, Yemen, Qatar, United Arab Emirates and Oman. These regions have different tribes and are known to practice ancient methods of healing diseases [29]. Saudi Arabia is the largest country in terms of geography in the region and is comprised of mountains, valleys, lava areas, meadows, and rocky deserts. The climatic variation supports the growth of several species of fauna and flora that have medicinal properties [30].
According to one study, Saudi Arabia produces more than 900 genera comprising 2500 species of plants. More than 20% of them were found to be new and uncommon plants, particularly native to this part of the world [31]. Another study suggested that the practice of using traditional medicine is transferred from one generation to another [32]. This is evident from the use of myrrh, black seeds and kawajawa in different natural remedies still popular among the local population. Some of these substances are also commonly used in the preparation of culinary and traditional dietary supplements [33].
A substance that has the ability to inhibit the function of oxidizing enzymes, prevent the cellular damaging action of oxidizing agents, or repair the damage caused by oxidizing agents can be referred to as an antioxidant [23]. Antioxidants exert their action by multiple pathways, such as decreasing the localized concentration of oxygen free radicals, scavenging the free radicals, decomposing the lipid peroxide radicals, converting free radicals into non-radical products, and breaking the process involved in free radical-mediated cellular damage [25]. Several plant-isolated phytochemicals such as flavonoids, tannins, saponins, and phenolic compounds have exhibited antioxidant potential. Natural substances having these phytoconstituents could play a vital role in minimizing oxidative damage [24]. Identifying such natural sources not only provides scientific knowledge but also helps in exploring their health benefits.
This review was planned with the intention to highlighting the rare and uncommon plants that have been reported to possess medicinal properties. The information listed in the following sections briefly summarizes the biological data that might provide a direction for future studies to evaluate the therapeutic potential of plants (Figure 1) native to Saudi Arabia. 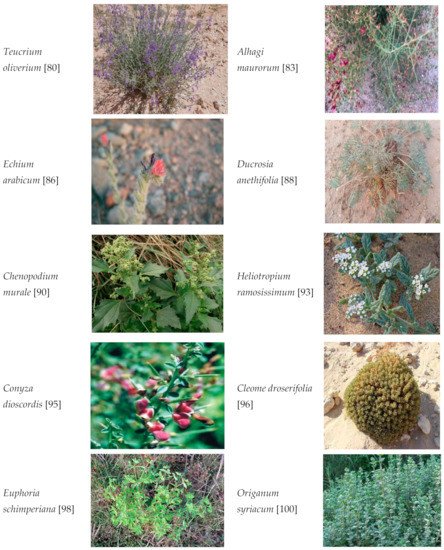