Submitted Successfully!
Thank you for your contribution! You can also upload a video entry related to this topic through the link below:
https://encyclopedia.pub/user/video_add?id=14454
Check Note
2000/2000
Antimicrobial Peptides and Antibiotics
Edit
Upload a video
This entry is adapted from 10.3390/antibiotics10091095

Antimicrobial peptides constitute one of the most promising alternatives to antibiotics since they could be used to treat bacterial infections, especially those caused by multidrug-resistant pathogens. Many antimicrobial peptides, with various activity spectra and mechanisms of actions, have been described.

There was collective enthusiasm about the advent of antibiotic therapy, and this optimism prevailed in the light of the constant discoveries of new classes of antibiotics, despite the very early description of therapeutic failures and resistance to treatments with these drugs [1]. At the present, in 2021, multidrug-resistant (MDR) and even pan-drug-resistant (PDR) bacteria have spread widely around the world and are currently responsible for increasing morbidity and mortality rates, as well as the significant cost to society [2]. The low frequency of discoveries of new classes of antibiotics, and the rapid emergence of resistance to novel antibiotics, show the need for novel therapeutic alternatives to antibiotics, such as lysine-based small molecules, vaccines, anti-virulence strategies, phage therapy and antimicrobial peptides.
Antimicrobial resistance (AMR) is an emerging global health problem that results, in some cases, in difficulties to treat bacterial infections. It was listed by the World Health Organization (WHO) among the top ten global public health threats facing humanity, as it is predicted to cause about 10 million deaths each year by 2050 [3]. Therefore, efforts to slow down the propagation of AMR have been implemented worldwide. As such, a Global Action Plan on Antimicrobial Resistance (GAP) was created in 2015, aiming to implement national action plans to limit the progress of AMR. In addition, the WHO reports call for urgent action to avert an antimicrobial resistance crisis and insists on the importance of discovering and developing new antibiotics. Thus, new compounds that are active against pathogens, especially those which cause nosocomial infections and tend to adopt multidrug resistance, are needed. To curb this problem, several alternative therapies have been proposed, among which antimicrobial peptides (AMPs) were suggested to be very promising more than 20 years ago, as they have existed in nature for millions of years with almost no or limited resistance development [4]. This makes them very attractive compared to antibiotics that develop resistance relatively fast. This absence/slow development of resistance against microbes may be attributed to the presence of various modes of action of AMPs against the bacteria in comparison to the fixed targets used by the antibiotics [5]. In addition, AMPs are considered less toxic, as they are broken down into amino acids unlike other therapeutics, which might generate potentially harmful metabolites. This review is to highlight where these molecules stand now in the overall scheme to curb MDR bacterial infections. Their potential to counteract AMR, to replace traditional antibiotics, to evaluate their benefits and to describe the challenges faced by R&D will be discussed in this review.
AMPs are small polypeptide molecules, typically made up of around 12 to 50 amino acids, found in all classes of living organisms [6]. These molecules are produced as secondary metabolites, are part of the innate immunity and are, in mammals, usually ribosomally produced by epithelial cells, but also by phagocytes (cells of the immune system). These peptides can be found in tissues or mucous membranes; in fact, the latter harbor a multitude of pathogenic or commensal microorganisms. Among these peptides, some have a broad spectrum of antimicrobial activity, capable of inhibiting or killing different types of microorganisms (MO) (Gram-positive or -negative bacteria and/or fungi) but also protozoans, and viruses [7][8]. According to The Antimicrobial Peptide Database, more than 3257 antimicrobial peptides have been described to date [9]. They originate from six kingdoms, where 365 come from bacteria, 5 from archaea, 8 from protists, 22 from fungi, 360 from plants, and 2414 from animals, in addition to some synthetic peptides. Recently, another webserver with several subsections that screen among 40,000 entries has been made available. It summarizes all available data for desired peptide properties, thus allowing further structural and functional studies [10].

2. Classification and Mode of Action of Antimicrobial Peptides

AMPs are usually classified according to several criteria: First, based on their biological source. In this classification, we distinguish AMPs from human and mammalian sources, such as cathelicidin and defensin, which make up the most important families of AMPs [11]; AMPs from amphibians [12], fish [13], insects [14], and plants [15] are also classified in this category. Classification could be based on the AMP’s biological functions; for example, antibacterial, antiviral, antifungal, antiparasitic peptides were described. Third, based on their biochemical properties (amino acid sequence, composition, length, hydrophobicity, charge), where conformation and structure serve as criteria for classification as well [7].

Rapid diagnostic tools are the key to prevent the spread of contagious infectious agents by rapidly identifying carriers or infected patients and prompt implementation of adapted infection control measures. The ability of AMPs to sense bacterial presence in potentially infected clinical samples is a major advantage. As already reviewed by Pardoux et al., AMPs could serve as infection selective tracers where they act as probes in biosensors and thus detect pathogens [16]. This is due to the preferential binding of AMPs along with their great number allowing the coverage of a wide range of microorganisms. AMPs were also described as powerful radiotracers and proved to be even better than labeled antibiotics [17]. [99mTc-HYNIC/EDDA]-MccJ25 is an example of an antimicrobial peptide analog that was used as a potential radiotracer for detection of infection [16]. Interestingly, this imaging agent for E. coli infection is also stable against enzymatic and metabolic degradation [18].

In addition to activity toward bacteria, according to the database of antimicrobial activity and structure of peptides (DBAASP) [19]., 208 AMPs have been reported to show antiviral activities against SARS-CoV-2. Slight changes to glycocin F and lactococcin G increased their efficacy against SARS-CoV-2 by inhibiting protein synthesis with no side effects [20]. Similarly, mucroporin-M1 (LFRLIKSLIKRLVSAFK), a peptide analog displaying four amino acid changes (G3R, P6K, G10K, and G11R) as compared to the parent peptide mucroporin shows therapeutic activities against SARS-CoV-2 [21]. Brilacidin and LF are additional drug candidates for SARS-CoV-2 treatment [22][23]. Caerin 1.6 and caerin 1.10, two other AMPs, have a very high potential to interact with the spike surface protein of SARS-CoV-2, but low affinity for the ACE2 receptor. The selectivity of these peptides toward viral proteins makes them potential candidates for SARS-CoV-2 therapy [24].

AMPs constitute promising agents with good antibacterial activity against a large set of pathogens, including Gram-negative and Gram-positive bacteria. Their ability to kill ESKAPE pathogens, especially those being pan-drug-resistant, represents a clinical added value over antibiotics due to the limited treatment options available to eradicate such infections. In this review, examples of AMPs effective against MDR bacteria that have the potential to replace conventional antibiotics have been reported. Their roles in boosting the activity of therapeutic molecules, eradication of biofilms, and preventive healthcare broaden AMPs’ therapeutic potential (Figure 1). However, despite the huge number of AMPs described, and the efforts to optimize them, only a few reached advanced clinical trials. There are several challenges, such as their low stability, high extraction costs, and cytotoxicity, which need to be overcome so AMPs can be used in clinics. Nevertheless, due to increasing research efforts, it is expected that, hopefully, potent alternatives to antibacterial agents with the ability to eradicate untreatable life-threatening infections will be developed soon. 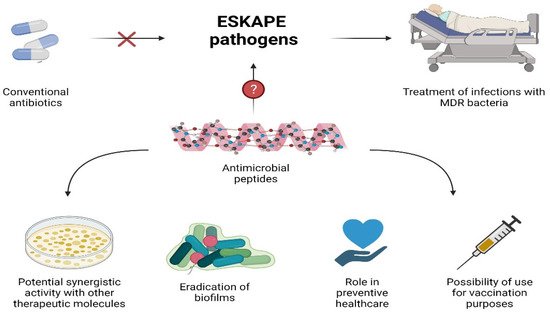 Figure 1. Potential use of AMPs.

More
© Text is available under the terms and conditions of the Creative Commons Attribution (CC BY) license (http://creativecommons.org/licenses/by/4.0/)
Upload a video for this entry
Information
Subjects: Medicine, General & Internal
Contributor MDPI registered users' name will be linked to their SciProfiles pages. To register with us, please refer to https://encyclopedia.pub/register :
Thierry Naas
View Times: 70
Revisions: 2 times (View History)
Update Time: 23 Sep 2021
Table of Contents
1000/1000
Hot Most Recent