Submitted Successfully!
Thank you for your contribution! You can also upload a video entry related to this topic through the link below:
https://encyclopedia.pub/user/video_add?id=14428
Check Note
2000/2000
ER-Phagy and Its Diseases Relevance
Edit
This entry is adapted from 10.3390/cells10092328

Autophagy with endoplasmic reticulum (ER) as a specific substrate is called ER-phagy or reticulophagy. It occurs both under physiological conditions at the basal level, and when cells are insulted by starvation, UPR, toxin stimulation, and many other internal or external environmental changes, to achieve cell homeostasis by removing damaged or excess ER.

ER-phagy, which is also called reticulophagy, refers to the selective autophagy of the ER. Cells use it to selectively clean up damaged ER subdomains and abnormally accumulated ER luminal proteins to maintain homeostasis. With the discovery of the first ER-phagy receptor in 2015, this field has really entered the study at the molecular level and significant mechanisms have been unveiled. At the same time, a close relationship between ER-phagy and human diseases, such as neurodegenerative diseases, cancers, and metabolic diseases, has also been found.

The phenomenon of ER being engulfed by the double-membrane vesicle, autophagosomes, was first reported in 1973[2]. Phenobarbital treatment can significantly induce the formation of inner membrane structure within hepatocytes. After removing the drug, the slippery ER is preferentially degraded through the autophagy pathway, which puts forward the concept of ER-phagy[2]. Later, it was found that rapamycin, an mTOR inhibitor that mimics starvation conditions, can also induce the degradation of ER in yeast, which is dependent on the autophagy machinery[3]. Interestingly, typical UPR inducers such as DTT (dithiothreitol, a reducing agent which breaks disulfide bonds within proteins and maintains the sulfhydryl group in a reduced state, causing serve accumulation of unfolded proteins within ER) and thapsigargin (Tg, a sarcoplasmic reticulum/ ER Ca 2+ -ATPase inhibitor) induce the formation a special ER structure which is called ER whorl[4][5]. In mammalian cells, Fang Xu et al. found that Tg induces ER whorls, which is dependent on PERK activation and COPII machinery[5]. Sebastián Bernales et al. found that the treatment of yeast cells with DTT leads to the dramatic increase of ER volume and also induces the formation of ER whorls[6]. Late on, the same lab found that these ER whorls can be delivered into the vacuole independent of the core macro-autophagy machinery[4]. Therefore, it was being debated whether vacuolar ER degradation is mediated by the autophagic pathway or not. The big breakthrough of this field happened in 2015 when Keisuke Mochida et al. and Aliaksandr Khaminets et al. reported the first ER-phagy receptors in yeast cells and mammalian cells, respectively[7][8]. The discovery of receptor proteins that target ER into autophagosomes gave a clear answer to the existence of selective autophagic degradation of ER.

ER-phagy is a multistep process that needs specific receptors and core autophagic machinery to promote the degradation of ER components. Under the induction of ER stress, such as UPR, protein aggregation, nutritional deficiency, and the destruction of ER structure, the ER components which need to be degraded can be recognized and “labeled” by specific ER-phagy receptors (Figure 1). At the same time, the cells activate the autophagosome initiation complex mainly by inhibiting mTOR or direct phosphorylation of Atg1/ULK1 (Serine/threonine-protein kinase ULK1, Atg1’s homolog in mammals) by AMPK to initiate the assembly of the isolation membrane. Ubiquitin-like proteins, Atg8/LC3/GABARAP, will be recruited to the growing isolation membrane to help membrane expansion. Meanwhile, Atg8/LC3/GABARAP proteins can identify and directly bind ER-phagy receptors. In this way, the ER subdomains to be degraded as well as the ER-phagy receptors are targeted into the autophagosomes as the isolation membranes gradually grow and seal. After that, the ER-containing autophagosomes fuse with the lysosome to degrade the substrate[9][10]. 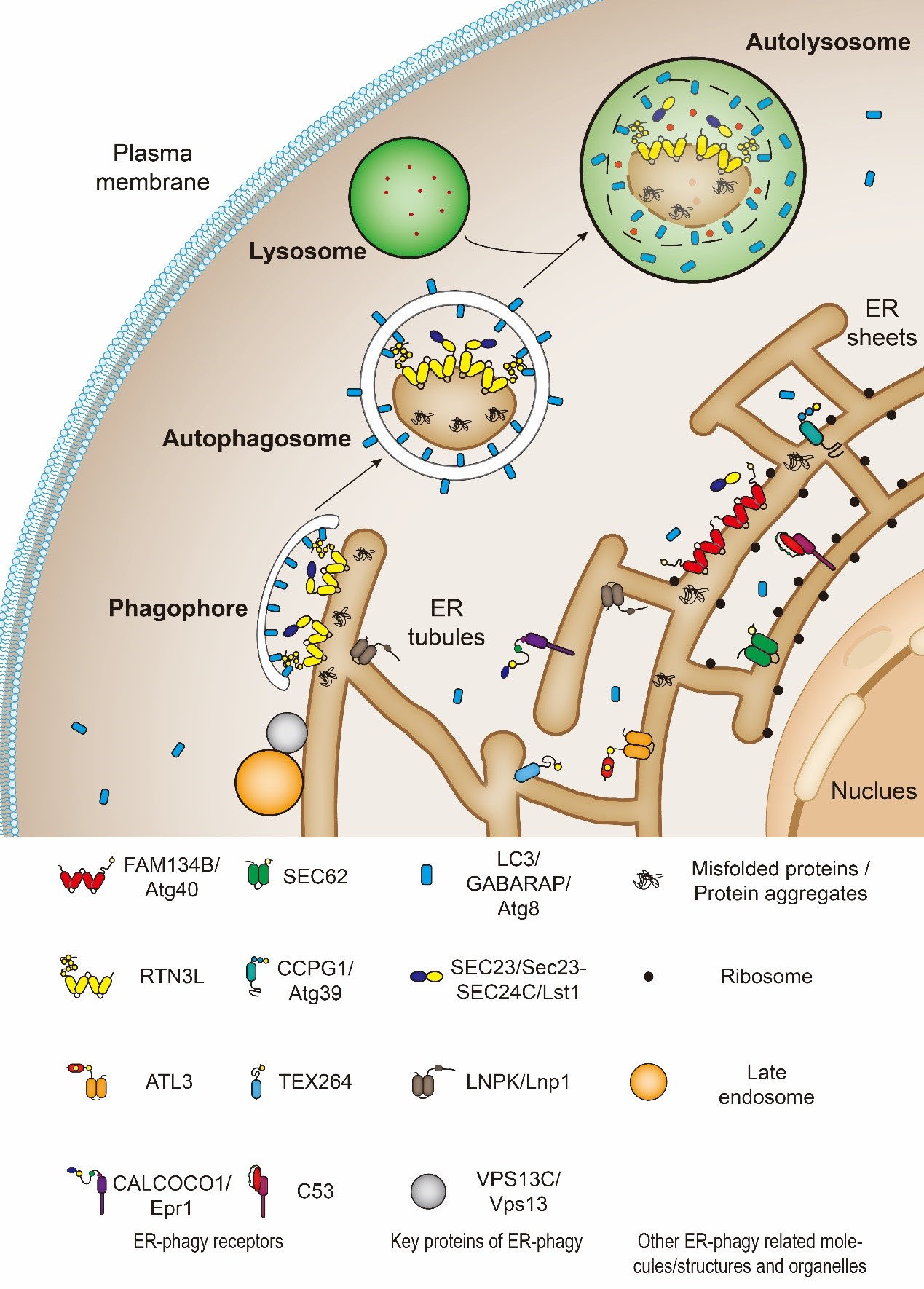 Like macro-autophagy, ER-phagy is also regulated by signal transduction[7][8][11]. Different stimuli can induce autophagy in different regions of ER, and the receptors and regulatory factors involved are different. And different receptors may participate in ER-phagy at the same time to preserve cell homeostasis[12]. What’s more, in the process of ER-phagy, the expression level, localization, and post-translational modifications (phosphorylation, ubiquitination, etc.) of receptors and other participating proteins are also tightly regulated. Some post-translational modifications are crucial for ER-phagy[13][14][15][16].

So far, eleven ER-phagy receptors have been identified from different species. They are either ER-membrane-anchored proteins or ER-membrane-associated proteins. Among them, six in mammals (FAM134B, RTN3L, TEX264, ATL3, SEC62, and CCPG1) and two in budding yeasts (Atg40 and Atg39) are directly anchored on the ER membrane by their reticulon domains or transmembrane domains. The rest identified receptors (CALCOCO1, C53, and Epr1) are located in the ER by binding to ER membrane resident proteins.

In mammalian cells, FAM134B is located on the sheet ER, thus, mediating sheet ER degradation[7]; RTN3L, TEX264, and ATL3 are located on the tubular ER, therefore, responsible for tubular ER clearance[12][17][18][19]; SEC62 is required for recov-ER-phagy, which refers to the ER-phagy induced to restore the homeostasis from ER-stress[20]; CCPG1 involves in maintaining the protein homeostasis of ER[11]; the most-recently discovered ER-phagy receptor, CALCOCO1, is very special because it is the first soluble and non-ER resident protein which mediates the self-bite of ER[21][22]. In budding yeast cells, Atg39 locates on the perinuclear ER (pnER); Atg40 is mainly present on the cytoplasmic ER (cytoER) and cortical ER (cER)[8][23][24]. Epr1 is another soluble ER-phagy receptor protein found in fission yeast and functions like mammalian CALCOCO1[25][26]. In addition, C53 is a soluble ER-phagy receptor found in both plant and mammalian cells[27]. The discovery of these diverse receptors has greatly promoted the understanding of ER-phagy and enriched the entire field of autophagy.

Besides ER-phagy receptors, other proteins such as SEC23/Sec23-SEC24C/Lst1, Lnp1 and Vps13 are also involved in ER-phagy. They work as cofactors of ER-phagy. For example, Yixian Cui et al. recently found that Lst1/SEC24C, a cargo adaptor, assists receptor proteins, Atg40/FAM134B/RTN3L, to mediate ER-phagy[28][29]. They can be transported to the lysosomes along with the autophagosomes during ER-phagy[28]. In addition, Lst1/SEC24C binds with Sec23/SEC23 to form ER-phagy sites (ERPHS), which is distinct from specialized ER exit sites (ERES) where COPII vesicles on the secretory pathway bud and transport to the Golgi[28][29]. Another cofactor is Lnp1. Lnp1 is an ER membrane protein which locates at the three-way junction of the ER[30]. It has been reported that Lnp1 also involves Atg40-mediated-ER-phagy[28][31]. Lnp1 is required for the recruitment of Atg40 to the ERPHS and its co-localization with Atg11[28][31]. And like Lst1 and Lnp1, researchers have found that yeast Vps13, which locates at numerous membrane contact sites, functions together with Atg40 in cortical ER-phagy[32]. It is responsible for targeting the ER fragments into the autophagosomes[32].

4. The Diseases Relevance of ER-Phagy

As a crucial basic biological process, ER-phagy requires to be highly controlled, and insufficient or overactivated ER-phagy could be both pathogenic. Many associations between ER-phagy and human diseases have already been reported, such as neurodegenerative disorders, cancer, metabolic diseases, viral infection, etc.

Neurodegenerative disorders can be characterized by incorrect folding of certain proteins or changes in the intracellular stress response[33]. As an important way to maintain the homeostasis of ER, the main site of protein folding and modification in a cell, ER-phagy plays an important role in clearing misfolded proteins and dealing with intracellular stress. Studies have shown that dysregulated ER-phagy causes a variety of neurodegenerative diseases.

Viruses invade host cells through a variety of methods to avoid cell detection and immune response. To protect from viral infection, cells have evolved multiple strategies, including ER-phagy. However, in most cases, viruses actively impede ER-phagy and other immune responses of cells to fulfill their proliferative needs. In these processes, pathogens usually impair the normal function of ER-phagy receptors and ER-phagy related molecules, then hijack them.

Although a lot is known about ER-phagy and its role in physiological and pathological conditions, there are still lots of unknowns to explore. In a similar line to other kinds of selective autophagy, such as xenophagy and mitophagy, efforts to uncover the mechanism of ER-phagy will benefit human health greatly.

More
© Text is available under the terms and conditions of the Creative Commons Attribution (CC BY) license (http://creativecommons.org/licenses/by/4.0/)
Upload a video for this entry
Information
Subjects: Cell Biology
Contributor MDPI registered users' name will be linked to their SciProfiles pages. To register with us, please refer to https://encyclopedia.pub/register :
Lin gang He
View Times: 79
Revision: 1 times (View History)
Update Time: 23 Sep 2021
Table of Contents
1000/1000
Hot Most Recent