Submitted Successfully!
Thank you for your contribution! You can also upload a video entry related to this topic through the link below:
https://encyclopedia.pub/user/video_add?id=14311
Check Note
2000/2000
Survey of the Tactile Internet
Edit

The Tactile Internet (TI) is an innovation that facilitates interaction between human beings (possibly over a distance) with visual presence and haptic feedback. In June 2015, the Technical Activities Board Future Directions Committee launched the most current activity for the Institute of Electrical and Electronics Engineers (IEEE) Digital Senses Initiative (DSI). The DSI is devoted to propelling advancements that catch and recreate human activities such as sense, touch, hearing, taste, and sight from the external world.

Significantly, the TI will establish vital prerequisites for next-generation access networks as far as latency, availability, and reliability are concerned. Wired access networks are ultimately fulfilling these prerequisites already, and wireless access networks are not yet proposed to fulfill these prerequisites. As per the International Telecommunication Union—Telecommunication Standardisation Sector (ITU-T) Technology Watch Report on the TI [1], research in these areas will need to speed up substantially, introducing new thoughts and designs to promote access network characteristic redundancy, and a decent variety to resolve RTT issues and reliability constraints of TI applications.

With regard to TI, Figure 1 depicts the progressive evolution of TI, as indicated by an ongoing ITU-T Technology Watch Report [1]. According to the definition given by the ITU-T Technology Watch Report, the Internet that comprises ultra-low latency, ultra-high availability, ultra-high reliability, ultra-responsive, fast reaction times, scalability, and security, is referred to as TI. On the other hand, the interconnection of physical devices with the Internet with requirements such as power efficiency, surveillance and data security, reliability, good energy management, relatively low throughput, and effective low latency, is referred to as the Internet of Things (IoT). In contrast, the Internet with the transmission of voice and data, video-streaming content, web browsing, and telephony, is referred to as mobile Internet.

Figure 1. The evolution of TI.

Furthermore, considering the stringent demands and requirements of TI involving ultra-low latency and ultra-high reliability, features such as data integrity, security, encryption, and network availability need to be established with fewer trade-offs between these. However, the existing centralized infrastructure is not adequate to meet these features. Therefore, more distributed infrastructure based on Fog/Edge computing should be adequately examined to bring TI applications nearer to end-users [2].

The demand for interdisciplinary research is crucial in planning and designing intelligent tactile sensors considering fabrication techniques/technologies, the material of sensors/devices, intelligent signal processing, and machine-learning algorithms to analyze the behavior of the sensing device and process complex data coming to the sensors. Several factors are necessary to realize the TI, such as security, reliability, availability, and latency in wireless transmission of tactile sensing data, thus giving the experience of remote real touch feeling and control. A few standardized works are forecasted to collaborate between the TI’s use cases and the improvement of current wireless sensor networks.

2. Design Aspects of the Tactile Internet 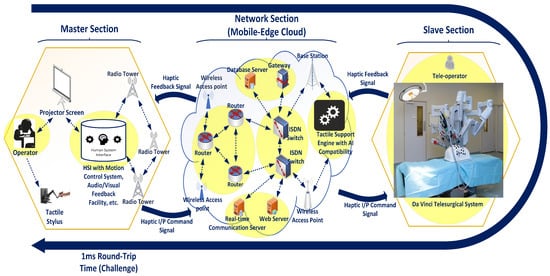 The master section is located at the front end of the TI system. It comprises a human operator with a tactile human-system interface (HSI). The input given by a human is then converted into tactile input by HSI. HSI is a master machine or robot which acts as a haptic device. A user is permitted to touch, feel, and manipulate in the real world. Through the command signals, the operation of the slave is controlled by the master section. It ought to be noticed that numerous operators can cooperatively curb the activities of the slave section in most of the applications. The audio and visual feedback features are essential for haptic and non-haptic control of the slave section. Thus, it is crucial to increase perceptual performance as the human brain coordinates typically diverse with tangible approaches [3].

The slave section comprises a teleoperator (slave robot) and is legitimately constrained by the master section through numerous coding techniques and haptic input command (instruction) signals. The teleoperator performs multiple actions as instructed by the master section in the remote environment. In addition, the slave section does not have previous information about the surroundings. Subsequently, a global control loop is formed when communication is initiated between the master and slave sections through feedback and command signals. Here, the Da Vinci telesurgical system [4] example involves robotic arms being manipulated by a surgeon sitting at one console (master section) with video monitoring and joystick controller, which is approved by the United States Food and Drug Administration (FDA).

It comprises routers and gateways, which facilitate a medium for two-way communication. The haptic input command signals are sent from the master section. Thus, the input signals pass through routers, switches, gateways, base stations, access points, database server, and tactile support engine equipped with AI and reach slave section.

3. Applications of the Tactile Internet

In various scenarios, communication will be enhanced through the Tactile Internet (TI), which will lead to increasingly reasonable social interaction. A portion of the imagined 5G-enabled tactile applications requires competencies such as RTT (1 ms or below), ultra-high availability, and ultra-high reliability, whose reliability should be significantly orders higher than in the current radio access network. It is also seen that existing wireless or cellular networks do not yield anything to accomplish an ultra-low latency of 1 ms and ultra-high reliability of 99.999%, which are essential for TI applications. In this way, it is troublesome to grasp all the possible emerging tactile applications at the early stage of 5G development. It could play a crucial role in eradicating the socio-economic boundaries of society [1]. Once the challenges are fulfilled, numerous applications can be explored and achieved with 5G mobile communications. Hence, the taxonomy of possible applications of TI with the 5G framework and their requirements are presented in Table 1. However, TI can support various applications as some of the ideas are shared as follows.

Table 1. Possible applications of the TI with 5G framework and their requirements.

Self-driven vehicles are broadly classified to be designed and constructed along with the advancements of technological fields. Most of them can be partially driven or fully self-driven. The highlights of self-driven vehicles will deliver a new driving experience. By incorporating the unique features of autonomous vehicles, the consumer will take some time to have a hands-on and manage those features. The highlights of such vehicles can be electronic braking systems with emergency braking, automatic parking, and versatile cruise control, where a driver can put his/her vehicle on autopilot mode. Most of these highlighted features are present in selected applications of the controlled environment. The futuristic thought of a fully self-driven vehicle is no longer just a thought. Different organizations are already working on the driving features that enable a vehicle to drive itself.

The benefits of a self-driven vehicle are nominally reduced accident rates, self-parking, and less time consumption. Other highlights of the autonomous vehicle are having access to entertainment and digital media and more relaxation time, which will significantly impact the financial budget. Nonetheless, implementation of all the features of the autonomous vehicle comes at the expense of satisfying a few challenges, which further requires enormous improvements in (1) communication technology, (2) infrastructure for the sensor domain, and (3) communication between the vehicles to fetch significant information [5].

What restricts its advancement is the RTT of the communication frameworks, as the recognizable RTTs legitimately impact the apparent authenticity of applications. Thus, the task could be made conceivable, e.g., designing a game application for a learner to simulate the dental care of a patient. The intended purpose will be to promote knowledge about oral care to interact with haptic devices.

4. Current Issues and Challenges of Realising the Tactile Internet

When it comes to designing the haptic framework, a commonly neglected factor in the literature is the placement of sensors. There are two ways in which haptic sensors can be fabricated: (1) single-element sensor and (2) multiple-element sensor arrays [6][7][8][9][10].

There is an advancement issue to investigate [9] about the conceivable arrangement to have various sensing circuit-handling sensors in different areas of the array sensor. Hence, finishing up the construction of a haptic sensor for applications of the TI is not a straightforward process. There are many challenges that need to be resolved, including scanning time, placement of the sensors, spatial resolution, and sensitivity.

There are different types of sensors available for capturing or tracking the movements at the operator end. We will discuss a few of the approaches that are being used to devise kinematic sensors. Simple mechanical frameworks are adopted to capture the moment and are generally equipped with some connections and electrochemical transducers such as a potentiometer to follow the motion. There are also other methods for tracking the movements of the body such as [11][12][13][14][15][16]: (a) Magnetic-based strategy is used wherein magnetic sensors are deployed at different parts of the body and as the body moves, the sensor tracks the movement of the body and records its position; (b) In radio-frequency identification (RFID)-based strategies, the radio-frequency tags, and sensors are used to gather the movements of the body; (c) Image sensors are also strategized to catch an image at stipulated period, and then it is processed to evaluate the position/motion of the body; (d) Capacitive-based techniques are also used to capture the body movement with the deployment of capacitive sensor arrays, placed in proximity to the body. Here, a parallel plate of the capacitance concept is used between the body and sensors, noting a change in capacitance as the body moves, and many more. Many recent techniques have been developed to sense and track the movement of the body at the operator end.