Submitted Successfully!
Thank you for your contribution! You can also upload a video entry related to this topic through the link below:
https://encyclopedia.pub/user/video_add?id=14228
Check Note
2000/2000
Non-Pegylated Liposomal Doxorubicin for Therapy
Edit
Upload a video
This entry is adapted from 10.3390/cancers13174421

Anthracyclines are among the most active chemotherapies in breast cancer (BC). However, they can cause structural and cumulative dose-related cardiac damage; hence, they require careful administration after preliminary functional cardiac assessment and subsequent monitoring, along with a limitation in the cumulative dose delivered. Non-pegylated liposomal doxorubicin (NPLD) has been precisely developed to optimize the doxorubicin toxicity profile, while retaining its therapeutic efficacy, thanks to a reduced diffusion in normal tissues with preserved drug penetrance into cancer sites. This has allowed administration of NPLD beyond a conventional doxorubicin maximum cumulative dose, as well as in patients with cardiac comorbilities or anthracycline pretreatment.

Anthracyclines are among the most active chemotherapeutic agents in breast cancer (BC), along with taxanes. Nevertheless, a risk and peculiar side effect induced by anthracyclines is cardiotoxicity, potentially leading to congestive heart failure (CHF) [1]. The specific mechanism underlying this adverse event is still unclear, although it is recognized that a combination of factors represented by the induction of reactive oxygen species (ROS)-mediated oxidative stress; DNA damage; senescence; and cell death pathways activation in cardiomyocytes and, as additional targets, cardiac progenitor cells, cardiac fibroblasts, and endothelial cells, seem to concurrently be responsible [1].
The structural myocardial damage is now thought to have already occurred at the time of first exposure, progressively accumulating over time, and therefore is dose related and substantially irreversible [1]. For this reason, treatment with standard anthracyclines requires continuous periodical cardiac function monitoring, usually with seriated echocardiographies [1]. This examination allows for a non-invasive and accurate evaluation of the left ventricular ejection fraction (LVEF), but also newer parameters that seem to be able to detect early subclinical forms of cardiotoxicity that are still not causing symptomatic or asymptomatic LVEF reductions (e.g., 2D global longitudinal strain, E/e’ ratio, 3D ejection fraction, etc.) [2][3]. It is also necessary to limit the total cumulative dose administered over time [1]. In fact, the cumulative dose recommended by current guidelines is 450–480 mg/m2 for standard doxorubicin and 900 mg/m2 for the less cardiotoxic epirubicin, although the latter needs to be administered at higher doses as compared with doxorubicin, to obtain similar efficacy (epirubicin 90 mg/m2 is considered to be equivalent to doxorubicin 60 mg/m2) [4][5][6]. Yet, no absolute safe dose of anthracyclines exists, since cardiotoxicity is a stochastic effect [7].
Given the unquestionable efficacy of anthracyclines in BC and the need to optimize their toxicity profile, the last three decades have seen the development of new mechanisms of drug delivery and their application to this drug class, among others [8]. In addition, concomitant administration with cardioprotective agents such as dexrazoxane have been investigated [9]. Dexrazoxane has been shown to reduce the risk of clinical heart failure and cardiac events in patients with breast cancer undergoing anthracycline chemotherapy without altering the impact on breast cancer outcomes [9]. However, the quality of available evidence is low and dedicated randomized trials are warranted. Moreover, some randomized controlled trials (RCT) in patients with solid tumors treated with anthracyclines found that beta-blockers, such as carvedilol or nebivolol; aldosterone antagonist spironolactone; angiotensin-converting enzyme inhibitors (ACEI); and angiotensin receptor blockers (ARB), such as enalapril or telmisartan, respectively, were associated with a cardioprotective effect. On average, there has been no, or limited, LVEF reduction as compared with the controls in all studies [1]. However, no standardized pharmacologic preventive protocol has been established so far and uncertainties exist on whether to adopt a prophylactic pharmacological approach before, or early after, the onset of subclinical cardiac damage (e.g., subclinical rise in troponins) [1].
An effective way of reducing anthracycline-induced cardiotoxicity that has successfully entered the clinical practice scenario is liposomal encapsulation, with or without pegylation. The pegylated liposomal form of doxorubicin (PLD) is currently approved as a single agent in metastatic BC (MBC) at high risk of cardiotoxicity and shows some differences in the pharmacokinetic and pharmacodynamic profiles as compared with the non-pegylated liposomal formulation [10]. These distinctive features are at the basis of a more delayed administration schedule and some differences in the toxicity profile. Namely, the pegylated form, as compared with the non-pegylated form, has been associated with less frequent high-grade alopecia but higher rates of hand-foot syndrome, which is a dose-limiting toxicity for PLD [11][12]. However, within this paper, we will specifically focus on non-pegylated liposomal doxorubicin (NPLD), with the aim of dissecting its differences with conventional anthracyclines, and highlighting its relevance and optimal positioning in the current therapeutic algorithms.

2. Structure and Mechanisms of Action

NPLD structurally consists of a spherical vesicle of 150–250 nM formed by a lipidic bilayer of acidic egg phosphatidylcholine and cholesterol (55:45 ratio), enclosing an aqueous core, which contains multiple molecules of doxorubicin in a lipid/drug ratio of approximately 0.27 (Figure 1) [13]. 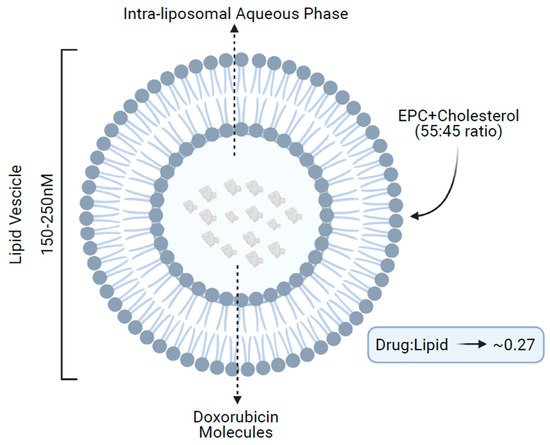 Figure 1. Structure of non-pegylated liposomal doxorubicin. EPC, acidic egg phosphatidylcholine.
Within the core, doxorubicin is protonated, resulting in an entrapment efficacy of the negatively charged lipidic bilayer of more than 99%. This translates into lower levels of free drug in the blood and less nonspecific bindings as compared with conventional doxorubicin. Concurrently, the large size of the liposome vesicles also minimizes doxorubicin exposure to normal tissues, because healthy tissues such as the heart and gastrointestinal tract, do not present the leaky vasculature found at tumor sites. Hence, normal organs are subjected to lower levels of doxorubicin accumulation, leading to a reduced incidence of side effects, including cardiotoxicity. Additionally, the larger size of the liposomes makes them easily recognized by mononuclear phagocytes; in fact, several in vivo preclinical studies have demonstrated that the behavior of the liposomal-encapsulated drug is largely controlled by the interaction of liposomes with the reticuloendothelial system [14][15]. All these features, taken together, are responsible for a differential pharmacokinetic and pharmacodynamic profile between conventional doxorubicin and NPLD, which is on the basis of NPLD performance in clinical trials, as subsequently discussed.

NPLD is currently approved in Europe and Canada at a dose of 60–75 mg/m2 intravenously (IV) every 3 weeks (q3w), in combination with cyclophosphamide at 600 mg/m2, as first-line chemotherapy (CT) for HER2-negative (neg) MBC [13]. This indication is based on the results of three randomized phase III trials [16][17][18]. The first trail was a randomized study of NPLD + cyclophosphamide vs. doxorubicin + cyclophosphamide (AC) as first-line in HER2-negative MBC. The experimental regimen showed comparable response rates (43% vs. 43%), similar time-to-progression (TTP) (median TTP [mTTP] of 5.1 vs. 5.5 months, p = 0.82), and overall survival (OS) (median OS [mOS] 19 vs. 16 months, p = 0.21), with significantly less cardiotoxicity (6% vs. 21%, reduction in LVEF, including five cases of CHF), neutropenia, need for red blood cells (RBC) transfusions, and mucositis/stomatitis as compared with the control [16]. Interestingly, the NPLD-based regimen was superior to AC in the small subset of patients pretreated with anthracyclines in an early setting in terms of response rates (50% vs. 20%) [16].
Another pivotal trial of NPLD + cyclophosphamide vs. epirubicin + cyclophosphamide (EC) showed consistent results, with NPLD + cyclophosphamide being non-inferior in terms of response rates (46% vs. 39%, pnon-inf. = 0.002), significantly superior in TTP (mTTP of 7.7 vs. 5.6 months, p = 0.022), and comparable in terms of OS (mOS of 18.3 vs. 16.0 months, p = 0.504) with respect to EC [17]. This is in line with the results of an older study from the French Epirubicin Study Group, which demonstrated that anthracyclines used at higher doses and longer duration did not induce a significant OS benefit, but had a positive impact on response rates and TTP [19]. Neutropenia was more frequent with NPLD but the overall toxicity profile was very similar, unexpectedly including cardiotoxicity rates (12% vs. 10% of LVEF reductions, with no CHF). This might depend on a combination of factors, including the higher dose of NPLD chosen for this trial as compared with the former trial (75 mg/m2 vs. 60 mg/m2), the lack of statistical power to specifically detect significant differences in cardiotoxicity, and the lower dose of epirubicin as compared with a standard EC regimen.
NPLD was also compared as a single agent to doxorubicin in a phase III RCT where response rates, TTP, OS, and toxicities were found to be similar between the two drugs [18]. However, this trial confirmed the lower cardiotoxicity rates with the liposomal formulation (13% vs. 29% LVEF reductions, including two and nine CHF events, respectively), further supporting its use in clinical practice as a replacement for standard anthracyclines. The main trials’ characteristics and results are detailed in Table 1.
Table 1. Main characteristics of phase III pivotal trials of NPLD.
All pivotal trials showed a non-cardiac toxicity profile substantially comparable with that of conventional doxorubicin, with hematologic toxicities (e.g., leukopenia, neutropenia, and anemia), alopecia, diarrhea, nausea/vomiting, and stomatitis/mucositis being the most frequent adverse events. The most frequent (>2% cases within each study) grade 3–5 toxicities were arthralgias, diarrhea, fatigue, febrile neutropenia, nausea/vomiting, stomatitis, leukopenia, neutropenia, anemia, thrombocytopenia, and grade 2 alopecia [16][17][18]. The minimum-maximum rates of grade 3–5 toxicities across pivotal trials are reported in Table 2. Importantly, only one toxic death was reported with NPLD in pivotal trials [16][17][18].
Table 2. Grade ≥3 adverse reactions rates observed in phase III pivotal trials of NPLD + cyclophosphamide.
A Cochrane meta-analysis, in 2010, confirmed a significantly lower rate of both CHF and clinical-subclinical heart failure with liposomal-encapsulated doxorubicin (relative risk [RR] 0.20, 95% confidence interval [CI] 0.05–0.75, and RR 0.38, 95% CI 0.24–0.59 respectively) as compared with conventional anthracyclines in the metastatic setting [9]. Another recent meta-analysis, also including the RCT of the alternative pegylated liposomal formulation, confirmed similar efficacy in terms of PFS (p = 0.12) and OS (p = 0.93), with significantly better response rates (odds ratio [OR] 1.25, p = 0.03) and cardiotoxicity profile (OR for cardiotoxicity 0.46, p = 0.03) as compared with conventional anthracyclines [20].
Overall, the limited cardiotoxicity is, at present, the most valuable feature justifying the use of NPLD in clinical practice.

More
© Text is available under the terms and conditions of the Creative Commons Attribution (CC BY) license (http://creativecommons.org/licenses/by/4.0/)
Upload a video for this entry
Information
Subjects: Oncology
Contributor MDPI registered users' name will be linked to their SciProfiles pages. To register with us, please refer to https://encyclopedia.pub/register :
Concetta Elisa Onesti
View Times: 20
Revisions: 2 times (View History)
Update Time: 16 Sep 2021
Table of Contents
1000/1000
Hot Most Recent