Submitted Successfully!
Thank you for your contribution! You can also upload a video entry related to this topic through the link below:
https://encyclopedia.pub/user/video_add?id=14191
Check Note
2000/2000
Schlafens in Cancer Cell Biology
Edit
This entry is adapted from 10.3390/cells10092238

Schlafens (SLFN) are a family of genes widely expressed in mammals, including humans and rodents. These intriguing proteins play different roles in regulating cell proliferation, cell differentiation, immune cell growth and maturation, and inhibiting viral replication. The emerging evidence is implicating Schlafens in cancer biology and chemosensitivity. Although Schlafens share common domains and a high degree of homology, different Schlafens act differently. In particular, they show specific and occasionally opposing effects in some cancer types.

The Schlafens (SLFN) are a novel and poorly understood family of proteins that have chiefly been investigated for their potential roles in non-malignant cell differentiation, cell proliferation, and the immune response. However, these proteins are now increasingly believed to be important in cancer. This review will briefly summarize basic Schlafen protein biology and then outline current knowledge about the role of Schlafen proteins in cancer.
Schlafens were first discovered in mice in 1998 by Schwarz et al. [1], describing the murine proteins Slfn1, Slfn2, Slfn3, and Slfn4. These proteins have subsequently been shown to be expressed in a wide range of vertebrates, including humans [2]. Mouse Slfn1 was the first discovered Schlafen and was reported to induce thymocyte cell cycle arrest (put the cell to sleep), thereby giving rise to the name of this class of proteins from the German word “Schlafen”, which means “sleep” [1]. Later, in 2000, Slfn2 was connected to Dickkopf-1 protein (DKK1) lethality in mice [3]. In 2004, Geserick et al. [4] identified and characterized another subgroup of Schlafens in mice characterized by a C-terminal sequence motif homologous to the superfamily I of DNA/RNA helicases and were identified as Slfn5, Slfn8, Slfn9, Slfn10, and Slfn14. In 2009, genomic and phylogenetic studies conducted by Bustos et al. [5] showed that Schlafens are widely expressed in mammals and identified the Schlafen genes in humans and other mammals.
Mice express ten Schlafens. These are Slfn1, Slfn1L, Slfn2, Slfn3, Slfn4, Slfn5, Slfn8, Slfn9, Slfn10 pseudogene, and Slfn14. In comparison, humans express six Schlafens. These are SLFN5, SLFN11, SLFN12, SLFN12L, SLFN13, and SLFN14 [2][6]. Schlafen genes are located on chromosome 17 in humans, while in mice they localize to chromosome 11 [2][6] (Figure 1). 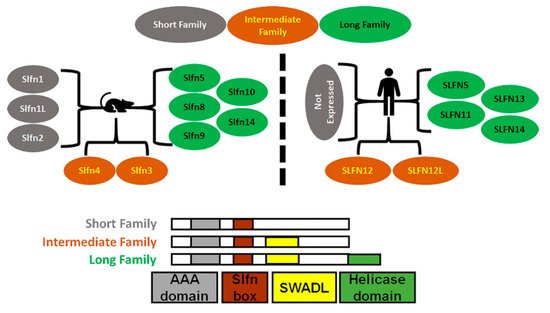 Figure 1. Diagrammatic representation of Schlafens family in mice and humans. Schlafens are classified into three families: short (grey), intermediate (orange), and long (green). Humans do not express short family Schlafens. All Schlafens share the SLFN box and putative AAA domains, while the SWADL domain is found in only intermediate and long Schlafens. Long Schlafens have an extra C-terminal helicase domain that harbors a nuclear targeting sequence.
SLFN5/Slfn5 and SLFN14/Slfn14 are the only direct orthologs between humans and mice. However, Slfn3 and Slfn4 share significant homology with SLFN12 and SLFN12L and have therefore also been identified as their orthologs [7]. Phylogenic analysis suggests Slfn8, Slfn9, and Slfn10 are orthologs to SLFN13, but there is no evidence or functional study that confirms a mouse ortholog of SLFN11.
Schlafens are expressed in diverse mammals, as well as in frogs and elephant fish. However, most research has focused on the role and function of Schlafens in mice, humans, and some viruses that express a viral ortholog of Schlafen identified as v-slfn. Schlafens were initially demonstrated to be differentially expressed in lymphoid tissue and thus believed to play a role in the maturation and activation of thymocytes [1]. However, further exploration has extended our understanding of Schlafen function to include roles in cell proliferation [8][9], cell differentiation [10][11], viral replication [12][13], cancer biology [14][15][16][17], and sensitizing cancer cells to chemotherapy [18][19][20][21][22][23]. 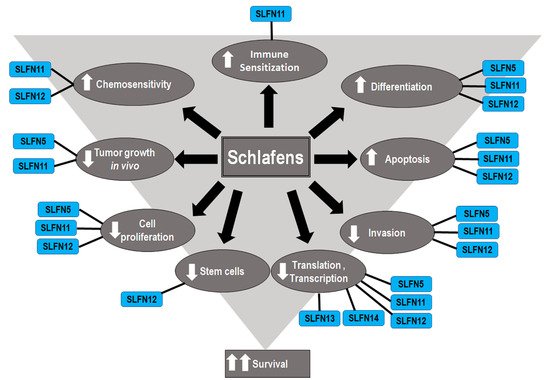 Figure 2. Diagram illustrates the identified effects of different Schlafens on cancer cell biology. The reduced cell proliferation, differentiation, invasion, and stem cells, in addition to the increased differentiation, immune sensitization, and chemosensitivity, all contribute to improved survival.
Table 1. Summary of the roles of human Schlafens in different cancer types. Each Schlafen expression level and the correlation with survival were identified. The non-cited data are derived from our analysis of publicly available tools (https://www.proteinatlas.org, accessed on 10 July 2021) and (https://kmplot.com/analysis/, accessed on 10 July 2021).

3. Functions of Human Schlafens in Cancer

Human Schlafens act through different mechanisms to induce their effects in cancer cells. This section will briefly outline what is known about the mechanism of action of each.
SLFN5 has been reported to act through several different mechanisms. SLFN5 negatively regulates the expression of the matrix metalloproteinase (MMP) genes MMP-1 and MMP-13 [25]. SLFN5 modulates epithelial to mesenchymal transition by regulating the β-catenin signaling pathway [38][39]. SLFN5 also binds and represses STAT1 transcriptional activity, and subsequently inhibits interferon-stimulated gene response to STAT1 [37]. SLFN5 also inhibits AKT Serine/Threonine Kinase (AKT) and Glycogen Synthase Kinase 3 Beta (GSK-3β) phosphorylation [39] and upregulates Phosphatase And Tensin Homolog (PTEN) and AKT pathway by inhibiting the transcription of Zinc Finger E-Box Binding Homeobox 1 (ZEB1). Moreover, SLFN5 decreases cellular purine metabolites [35][36]. Finally, SLFN5 interacts with Activating Transcription Factor 4 (ATF4) and regulates the expression of Linker For Activation Of T Cells 1 (LAT1) (essential amino acids transporter), which in turn modulates the Mechanistic Target Of Rapamycin Kinase 1 (mTORC1) signaling pathway [30].
SLFN11 has been reported to increase chemosensitivity by five different mechanisms. First, SLFN11 is recruited to sites of DNA damage and interacts there with the Replication Protein A1 (RPA1) to inhibit checkpoint maintenance and homologous recombination repair [40]. Second, SLFN11 inhibits the translation of ataxia-telangiectasia mutated (ATM) and Rad3-related protein (ATR) (which are central components of the DNA damage response) by codon-specific translational inhibition [41]. Third, SLFN11 interacts with DDB1–CUL4CDT2 ubiquitin ligase to degrade Chromatin Licensing And DNA Replication Factor 1 (CDT1) and subsequently reactivates replication in response to chemotherapy leading to the collapse of replication forks and cell death [42]. Fourth, SLFN11 induces genome-wide chromatin accessibility at promoter regions during replication stress induced by DNA damaging agents [43]. Finally, SLFN11 is recruited to stressed replication forks, binds nascent DNA, and interacts with the replication helicase subunit (MCM3) without inhibiting initiation or loading of replication factor Cell Division Cycle 45 (CDC45) or the proliferating cell nuclear antigen (PCNA). This then allows SLFN11 to subsequently block replication in response to replication stress independently from ATR within 4 hours of induction of DNA damage [44].
SLFN12 binds Serpin B12 and subsequently modulates the deubiquitylases USP14 and UCHL5 to inhibit the proteasomal degradation of differentiation transcription factors such as cdx2 [45]. SLFN12 inhibits the translation of the oncogenes ZEB1 [14] and C-Myc [15]. SLFN12 is stabilized by interaction with Phosphodiesterase 3A (PDE3A) and is recruited and binds the ribosomes to exclude signal recognition peptides and subsequently inhibits translation [46]. In addition to these effects, SLFN12 has recently been identified as an RNAse that digests ribosomal RNA [47].
SLFN13, in contrast to other long Schlafens, is localized to the cytoplasm and acts as tRNA/rRNA-endoribonuclease that digests both tRNAs and rRNAs with a preference for tRNA, which inhibits protein synthesis [48]. In contrast, the long SLFN14 is a ribosome-associated nuclear protein that binds to the ribosomal subunits and cleaves RNA, in particular rRNA and ribosome-associated mRNA, to control mRNA turnover and protein translation [49].

Although it has been more than twenty years since Schlafens were discovered, they remain intriguing proteins and are still enigmas. The exploration of the role of Schlafens in cancers is still in its early stages and evidence predicts a considerable role for Schlafens in tumorigenesis, as biomarkers and predictors for chemotherapy, and as possible targets for drugs.
The role of Schlafens is not universal, and each Schlafen has a distinct specific mechanism through which it affects cancer cell biology. Interestingly, this mechanism is not alike in all cancer types/subtypes. Instead, Schlafens demonstrate different effects in different subtypes of tumors of the same organ.
The complex signaling networks through which Schlafens are reported to act in cancer urges extensive future characterization and exploration of each Schlafen in the different cancer subtypes, which will eventually push us closer to better understand cancers in humans.

More
© Text is available under the terms and conditions of the Creative Commons Attribution (CC BY) license (http://creativecommons.org/licenses/by/4.0/)
Upload a video for this entry
Information
Subjects: Cell Biology
Contributor MDPI registered users' name will be linked to their SciProfiles pages. To register with us, please refer to https://encyclopedia.pub/register :
Sarmad Al-Marsoummi
View Times: 64
Revisions: 2 times (View History)
Update Time: 16 Sep 2021
Table of Contents
1000/1000
Hot Most Recent