Submitted Successfully!
Thank you for your contribution! You can also upload a video entry related to this topic through the link below:
https://encyclopedia.pub/user/video_add?id=14183
Check Note
2000/2000
Chemical Chaperones
Edit
This entry is adapted from 10.3390/ijms22179172

Proteins are highly functionally and structurally diverse biomolecules. To function properly, proteins usually obtain a specific conformational state that is considered ‘native’. However, the folded state of proteins is often only marginally stable [1][2][3]. Certain genetic, physiological, and environmental conditions can induce protein misfolding, resulting in the formation of small aggregation-prone species that tend to self-assemble into supramolecular assemblies [4]. In some cases, these assemblies obtain a fibrillar morphology and a set of canonical biophysical and biochemical traits, which are the hallmarks of amyloids [4][5]. Amyloid formation is associated with a wide range of disorders, such as type 2 diabetes, Alzheimer’s disease, and Parkinson’s disease, and is thus considered a central target for therapeutic intervention [4].
Chaperones play a pivotal role as the safeguards of the protein quality control system and take part in enhancing the proper folding of proteins, thus counteracting the potentially deleterious effect of protein misfolding [6]. They are classified into three main groups: molecular, pharmacological, and chemical chaperones [7]. Molecular chaperones (such as heat shock proteins) facilitate the proper folding of other proteins and are central players in the proteostasis network [6][7][8][9]. Pharmacological chaperones are small molecules that specifically bind misfolded proteins and induce refolding or structure stabilization [10]. Unlike pharmacological chaperones, chemical chaperones are small molecules that do not bind a single misfolded protein-ligand but rather function in a non-specific manner [10]. Chemical chaperones are divided into two structurally and functionally distinct groups: osmolytes and hydrophobic compounds [11]. Osmolytes are low molecular weight compounds such as amino acids, polyols, and methylamines (e.g., glycine, glycerol, dimethyl sulfoxide (DMSO), and trimethylamine N-oxide (TMAO)). Osmolytes increase the stability of the folded state by sequestering water molecules, thereby generating a preferential depletion of the osmolyte adjacent to the protein surface, leading to protein stabilization and conformational changes [12]. Hydrophobic compounds include several bile acids (e.g., deoxycholic acid (DCA) and ursodeoxycholic acid (UDCA)). Their mode of action is postulated to include direct interactions with the hydrophobic regions of misfolded proteins, thus favoring the folded form. However, the exact mechanism of action of this group is still not fully understood [11].
Chemical chaperones were shown to reduce endoplasmic reticulum stress, correct the misfolded form of the p53 tumor suppressor protein and restore glucose homeostasis [13][14][15][16][17]. The effect of different chemical chaperones in ameliorating protein misfolding in neurodegenerative and prion diseases has been well documented both in vitro and in vivo [18][19][20][21][22][23][24][25]. Chemical chaperones thus could potentially serve as scaffolds for the development of novel therapeutics for protein misfolding diseases.
A reductionist approach has allowed to re-define the minimal building block required for amyloid formation, demonstrating that this phenomenon is not restricted to proteins and peptides. Specifically, we have established that metabolites such as amino acids, nucleobases, and other small molecules can self-assemble into well-ordered amyloid-like fibrillar structures that share many common biophysical and biochemical properties with classical protein amyloids (Figure 1A). The extension of the canonical amyloid hypothesis has provided a novel paradigm for the etiology of human inborn errors of metabolism (IEMs), wherein a congenital enzymatic deficiency results in the accumulation of one or more metabolites [26]. We have recently established a salvage yeast model for adenine accumulation and self-assembly by recapitulating the enzymatic deficiency of patients suffering from metabolic disorders associated with the accumulation of adenine and its derivatives [27]. This model demonstrates robust sensitivity to adenine that is attributed to the formation of toxic adenine amyloid-like supramolecular structures, as indicated by staining with an amyloid-specific dye and specific antibodies raised against the fibrils. These effects were decreased upon treatment with generic fibrillation-modifying polyphenolic compounds such as tannic acid, thus supporting the potential of the model as a drug discovery platform [27][28]. 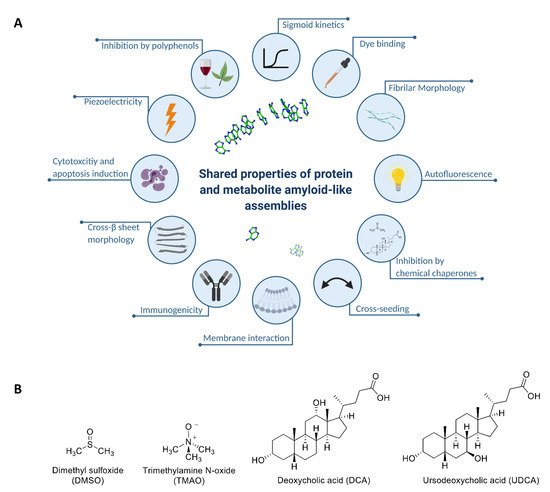 Figure 1. (A) Illustration of the shared properties of metabolite amyloid-like structures and protein or peptide amyloids: nanoscale fibrillar morphology [29][30][31][32], β-sheet secondary structure [33], amyloid-specific fluorescent dye binding [27][29][30], cytotoxicity and apoptosis induction [27][29][30][31][32][34][35], membrane interaction [36][37][38][39][40], inhibition by polyphenols [27][41], cross-seeding with protein amyloids [32][42], immunogenicity [27][29][32][43], intrinsic fluorescence [44][45], sigmoid growth curve [27], piezoelectricity [46], and inhibition by chemical chaperones (this study). Created with BioRender.com. (B) Molecular structure of DMSO, TMAO, DCA, and UDCA.
While the effect of molecular and chemical chaperones on misfolded proteins and the formation of proteinaceous amyloid assemblies is well characterized [6][47][48], it is unknown whether similar chaperoning mechanisms affect metabolite self-assembly. In this study, we applied a multimodal in vivo-in vitro-in silico approach to characterize the effect of chemical chaperones on metabolite self-assembly and amyloid formation. For this purpose, we examined the effect of four naturally occurring representative chemical chaperones: the DMSO osmolyte (found in various fruits, vegetables, grains, and beverages), TMAO osmolyte (one of the gut-derived metabolites found in diverse marine organisms), and the hydrophobic bile acids DCA and UDCA (Figure 1B) [11][49][50].

We first utilized our established salvage yeast model of adenine self-assembly (aah1Δapt1Δ) to examine the effect of DMSO, TMAO, DCA, and UDCA on phenotypes associated with adenine toxicity [27]. In line with their reported ability to inhibit protein and peptide amyloid formation [11], we observed a significant dose-dependent rescue of the adenine toxicity in yeast (Figure 2). 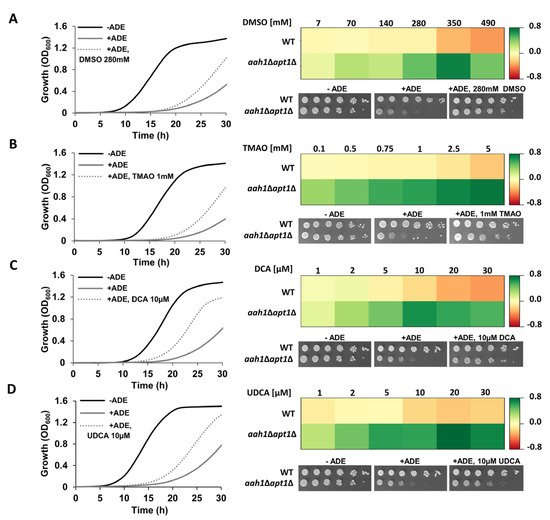 Figure 2. Inhibition of adenine toxicity by chemical chaperones in a yeast model. Left panel: Growth curves of aah1Δapt1Δ cells under the indicated conditions, at selected chaperones concentrations. Cells were grown at 30 °C and the absorbance at OD600 was measured over time (see Material and Methods). The results are representative of three independent biological repeats. Right panel: Dose-response heat maps representing the difference in optical density between a chaperone-supplemented culture and the control condition (+ADE) when the control cells reached OD600 = 0.6. Green, rescue. Red, toxicity. WT and aah1Δapt1Δ yeast were serially diluted and spotted on synthetic defined (SD) media lacking adenine (−ADE), SD media with adenine supplemented at 2 mg/L as a control for DMSO and TMAO, or with 2 mg/L adenine and 0.1% DMSO as a control for DCA and UDCA (+ADE), and SD with 2 mg/L adenine and the indicated concentration of the chemical chaperone. (A) DMSO; (B) TMAO; (C) DCA; (D) UDCA.
In order to examine whether the chaperone-induced growth improvement correlates with inhibition of amyloid aggregation, we stained the cells with the ProteoStat amyloid-specific dye, previously demonstrated to stain both protein and metabolite amyloids in vivo [27][51]. Flow cytometry and confocal microscopy were applied to visualize and analyze the intracellular amyloid content. As previously reported, adenine supplementation to the salvage mutant dramatically increased the intracellular amyloid content (Figure 3A,B), and resulted in a punctate staining pattern (Figure 3C,D) [27]. In accordance with the growth assays (Figure 2), the supplementation of chemical chaperones resulted in a significant reduction in the intracellular aggregate content in the mutant strain (Figure 3A,B). Furthermore, treatment with the chaperones significantly reduced the intracellular staining intensity (Figure 3C,D). 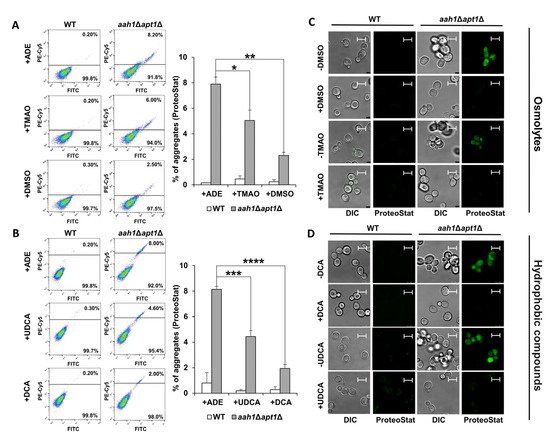 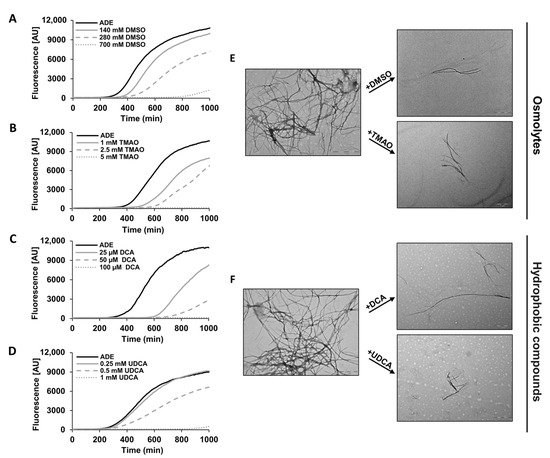 Figure 4. Inhibition of adenine fibril formation by different chemical chaperones in vitro. (A–D) Kinetic analysis of adenine aggregation as measured in a ThT binding assay. Adenine was dissolved at 6 mg/mL in PBS and heated to 90 °C to obtain a monomeric solution, followed by the addition of the chemical chaperones at the indicated concentrations (see Materials and Methods). ThT was added to a final concentration of 40 µM, and fluorescence was measured over time with excitation and emission wavelengths of 450 nm and 480 nm, respectively. The results are representative of three independent repeats. (E,F) Representative TEM micrographs of 1 mg/mL adenine in the presence or absence of the indicated chemical chaperone at 1.4 mM DMSO, 0.1 mM TMAO, 50 µM DCA, and 50 µM UDCA. Scale bar is 1 µm. The images are representatives of three double-blinded repeats.

More
© Text is available under the terms and conditions of the Creative Commons Attribution (CC BY) license (http://creativecommons.org/licenses/by/4.0/)
Upload a video for this entry
Information
Subjects: Biochemistry & Molecular Biology
Contributor MDPI registered users' name will be linked to their SciProfiles pages. To register with us, please refer to https://encyclopedia.pub/register :
Hanaa Adsi
View Times: 64
Revisions: 2 times (View History)
Update Time: 15 Sep 2021
Table of Contents
1000/1000
Hot Most Recent