Submitted Successfully!
Thank you for your contribution! You can also upload a video entry related to this topic through the link below:
https://encyclopedia.pub/user/video_add?id=14159
Check Note
2000/2000
Phosphate Laundries Wastewater
Edit
Upload a video
This entry is adapted from 10.3390/su131810072

The Company of Phosphates of Gafsa (CPG, Gafsa, Tunisia), the world’s fifth largest phosphate producer, was producing up to 8 million metric tons (t) of phosphate a year until 2010. Social unrest in Tunisia, however, has subsequently affected production [1]. The phosphate is “washed” in several phases, including the mechanical separation and treatment to increase the P2O5 content [1], consuming 5 t of water per ton of phosphate. Thus, the production of 8 million tons per year of marketable phosphate consumes approximately 10.5 million tons of water. Moreover, the CPG used water is paleowater from Infill Continental and is not renewable [2]. Although mining provides various social and economic solutions in Tunisia [2], the long-term negative effects on the environment and public health cannot be overlooked. Around 11 million m3 of wastewater per year is discharged into the receiving hydrographic network [3]. In this context, several studies proved that the analysis of phosphate wastewater in CPG showed its richness in various toxic heavy metals [1][4][5][6]. These non-degradable contaminants are able to infiltrate deep into groundwater sources and the surface water [7][8][9]. In addition, the persistent nature and bioaccumulation capacity of heavy metals in the food chain make these metals serious pollutants [10]. Some diseases, such as children’s dental fluorosis, are strongly related to the fluoride in the phosphate rock. In addition, fluoride exposure to the developing brain, which is much more susceptible to injury caused by toxicants than the mature brain, may possibly lead to permanent damage. A meta-analysis of published studies showed that increased fluoride exposure in drinking water is associated with neurodevelopmental delays [11]. In addition, the human respiratory system is negatively affected by fine phosphate particles generated by mining, causing respiratory diseases such as bronchitis and asthma and increasing the incidence of cancer [1][12].
Heavy metals are defined as metals with atomic weights between 63.5 and 200.6 g mol−1 and a specific gravity greater than 5 g cm−3 [13]. Several heavy metals such as copper (Cu), chromium (Cr), magnesium (Mg), zinc (Zn), manganese (Mn), cobalt (Co), nickel (Ni) calcium (Ca), sodium (Na) and molybdenum (Mo), at low concentrations, play a vital role in the life processes of organisms which serve as microelements needed for metabolic and redox functions. These metals are categorized as essential heavy metals. On the other hand, non-essential metals, including cadmium (Cd), lead (Pb), arsenic (As), mercury (Hg) and aluminum (Al), do not have any biological function and are toxic to living organisms [14]. Both categories of metals may exert their toxicity because they are non-degradable and are only transformable through methylation, sorption, complexation and alteration to a valence state, which influences their bioavailability, mobility and accumulation in tissues with the potential to transfer to higher trophic levels, deteriorating human health [9][10]. To solve this serious problem of metal pollution, numerous conventional methods have been practiced in order to eliminate heavy metal ions from industrial wastewater. Among the most commonly used techniques are chemical precipitation, oxido-reduction, filtration, electrochemical techniques and separation processes via membranes, which are far more expensive. These conventional techniques raise various problems such as unpredictable metal ion removal and the generation of toxic sludge [15].
Recently, a bioremediation process using biological agents to remove organic and inorganic toxic wastes from the environment has become an innovative efficient tool that could be the key to resolving this problem [12].
Microorganisms deploy many mechanisms to survive and resist metallic environments. These include metal oxidation, methylation, enzymatic degradation, metal-organic complexion, metal concentration decrease, metal ligand degradation, metal efflux pumps, demethylation, intracellular and extracellular metal sequestration, exclusion by permeability barrier and the production of metal chelators such as metallothioneins and bio-surfactants. Thus, to remove metals contaminants, microorganisms involve valence conversion, volatilization or extracellular chemical precipitation [12][16][17].

The first part of the experimental survey involved the characterization of Metlaoui phosphates laundries wastewater (MPLW) in terms of the conventional parameters. The physicochemical characteristics of the MPLW are summarized in Table 1. A considerable variability in the MPLW characteristics, released by phosphate laundries in Gafsa, Tunisia, and in the world, has been noticed [1]. The studied MPLW presents relatively alkaline pH (pH = 7.5) and slightly saline (EC = 3.5 mS cm−1), which favors the development of microorganism purifiers in aerobic and anaerobic environments [18]. This salinity was associated with the MPLW richness in chlorosity (1.1 g L−1). This effluent contained high amounts of total suspended solids (TSS = 61.8 g L−1), resulting in an elevated value of their turbidity (503 NTU). The values of the total suspended solids obtained were high, which revealed that there were suspended particles in the water samples analysed that invariably decreased the transparency and showed that the samples were highly polluted [18]. In addition, the total organic carbon (TOC), an important parameter in the assessment of organic pollution of water, was high (TOC = 3.7 g L−1) and exceeded the ranges fixed by Tunisian and international standards (Table 1) [19][20].
Table 1. Physicochemical and microbiological characteristics of Metlaoui phosphate laundries wastewaters (MPLW) in comparison with Tunisian national standards [21] and with international standards [22].
SD: standard deviation; EC: electrical conductivity; TSS: total suspended solids; TS: total solids; VSS: volatile suspended solids; NI: not identified; COD: chemical oxygen demand; BOD5: biochemical oxygen demand; TOC: total organic carbon; CFU: colony forming unit.

Nine bacterial strains were screened from the MPLW effluent. Among these isolates, strain ZC was selected for its high minimal inhibition concentrations towards Zn2+, Cu2+, Pb2+, Mg2+ and Cd2+ metal ions and its overproduction of exopolysaccharides in stressed conditions (data not shown). In order to identify the ZC isolate, purified DNA was amplified by the polymerase chain reaction using the universal bacterial Bac27F and Univ1492R primers [23]. The amplified DNA nucleotide sequence was about 1223 bp, and it was subjected to BLAST analysis. The DNA was extracted using an extraction kit “Wizard Genomic DNA Purification Kit” (Promega, Madison, WI, USA). The sequences used in the phylogenetic analysis were based on the fragments of sequences of the 16S rDNA of the type strains obtained from the ribosomal data project (RDP) and GenBank databases. Pairwise evolutionary distances were calculated using the method of Jukes and Cantor [24]. A dendrogram was constructed using the neighbor-joining method with MEGA-X software (State College, PA, USA) [25] (Figure 1). Confidence in the topology of the dendrogram was determined using 100-bootstrapped trees. 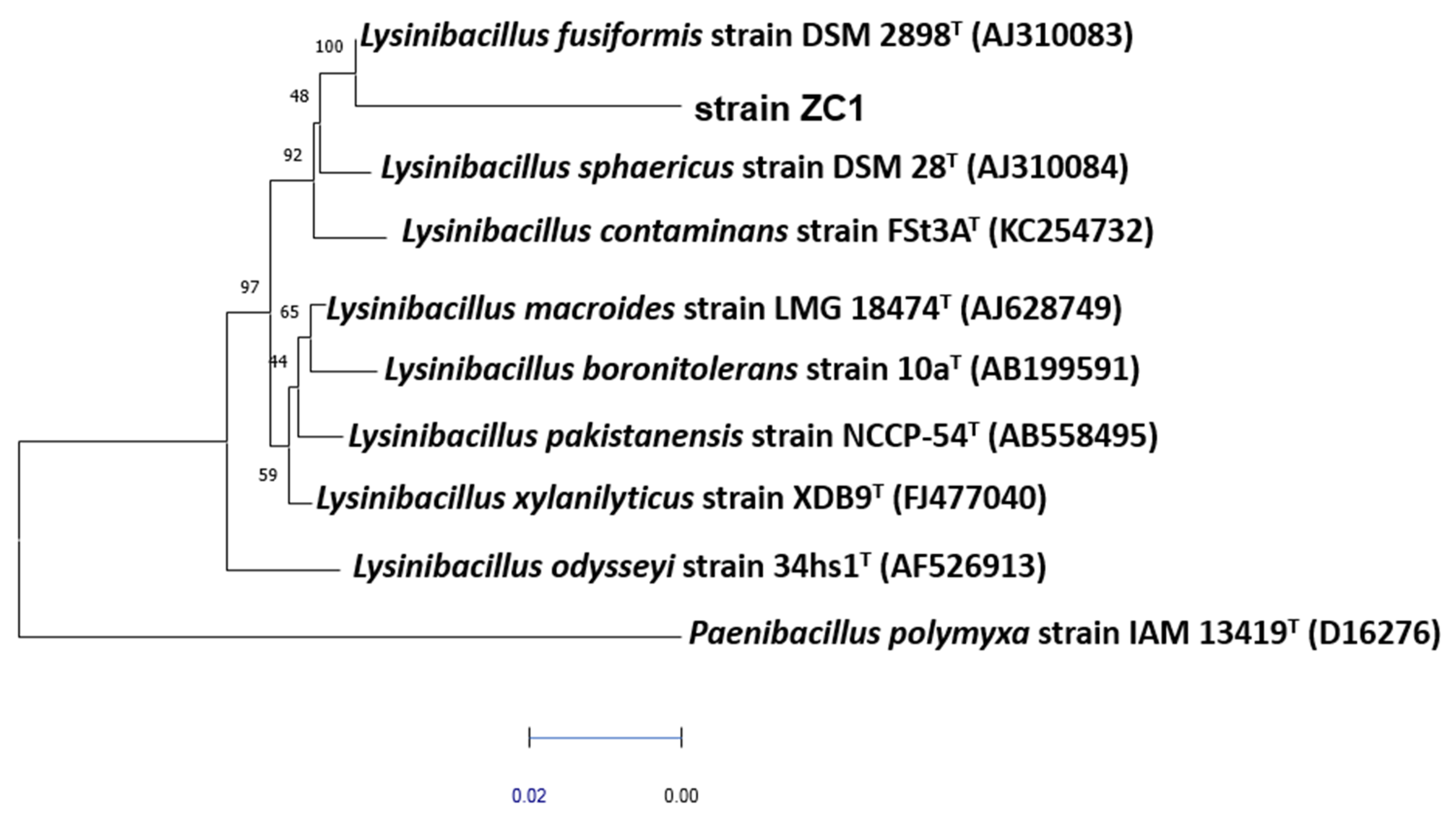 Figure 1. Phylogenetic tree based on 1223 unambiguous nucleotides of the 16S rDNA sequence, constructed by the neighbour joining method, showing the position of strain ZC among related members of the genus Lysinibacillus. Reference type strain organisms are included, and sequence accession numbers are given in parentheses. Bootstrap values, expressed as a percentage of 100 replications, are shown in branching points. Bar, 1 substitution in 100 nt. 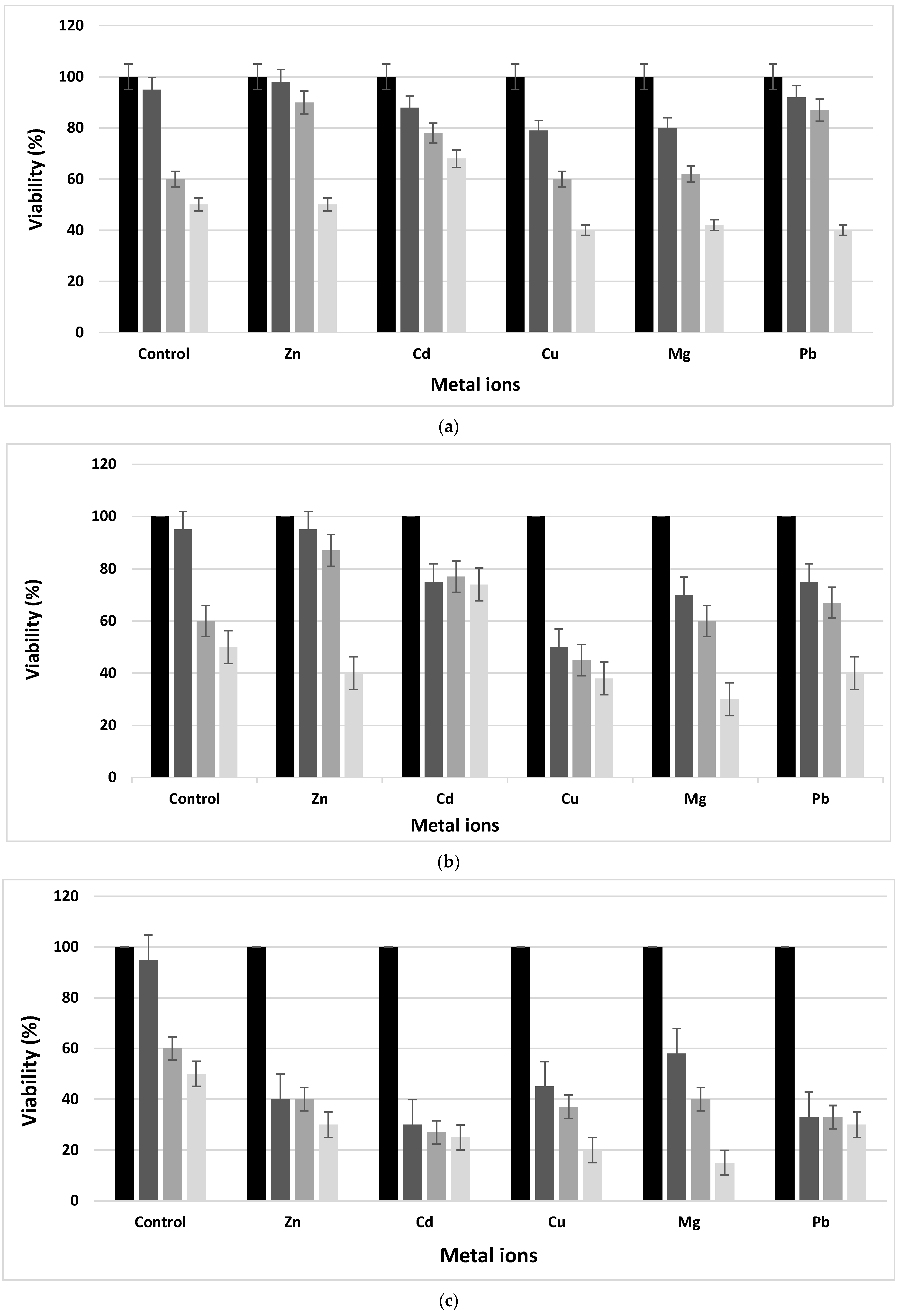 Figure 2. Viability of Lysinibacillus fusiformis in presence of the five metal ions at: (a) 1 mM, (b) 10 mM and (c) 100 mM after incubation at 0 h (■), 24 h (■), 48 h (■) and 72 h (■).
Mine wastewater can profoundly influence biological systems. For example, species diversity and the total biomass composition in aquatic and terrestrial ecosystems can be affected by heavy metal contamination [26]. The newly isolated L. fusiformis from MPLW is able to adapt and survive under extremely stressful conditions.

Herein, a new strain ZC was isolated from the Metlaoui phosphate laundries wastewater (MPLW) and identified as L. fusiformis. Indeed, the MPLW was especially rich in various heavy metal ions and had a high COD/BOD5 ratio underlining a poorly biodegradable organic load. The newly isolated strain showed a decreasing viability and an increasing adherence in presence of metal ions at 100 mM. In addition, the enzymatic and biochemical profiles as well as resistance or sensibility to antibiotics was changed. The strain ZC, used as a biological tool for MPLW treatment, showed a reduction of the metal ion contents. This reduction was due to accumulation and/or adsorption showing a bioprocessing performance of the newly isolated L. fusiformis. This potential can be used safely for the bio-treatment of effluents.