Submitted Successfully!
Thank you for your contribution! You can also upload a video entry related to this topic through the link below:
https://encyclopedia.pub/user/video_add?id=14133
Check Note
2000/2000
1,3,4-Oxadiazole
Edit
Upload a video
This entry is adapted from 10.3390/molecules23123361

Compounds containing 1,3,4-oxadiazole ring in their structure are characterised by multidirectional biological activity.

Around the world research is underway to find new anti-cancer drugs. The constant increase in the incidence [1], the numerous side effects of the drugs currently in use [2], as well as the developing resistance of tumours to drugs [3] force the continuous search for new molecules with a safer effect profile. New synthetic anti-cancer compounds are most often heterocyclic derivatives, whereby structures containing a 1,3,4-oxadiazole ring constitute a group of compounds with exceptionally high cytostatic potential.
Oxadiazoles are five-membered heterocyclic compounds containing two nitrogen atoms and one oxygen atom in their structure. They occur in several isomeric forms (Figure 1).

Figure 1. Isomeric forms of oxadiazole and modifications of unstable ring of 1,2,3-oxadiazole.
The 1,2,3-oxadiazole ring is unstable and is tautomerised to diazo-ketone linear form. It does not occur in the free form, but in rare mesoionic forms, called sydnones [4] (Figure 1). The other oxadiazole isomers are well known and occur in the structure of many drugs, e.g., antitussive oxolamine (1), antimicrobial furamizole (2), antiviral raltegravir (3) and others (Figure 2). 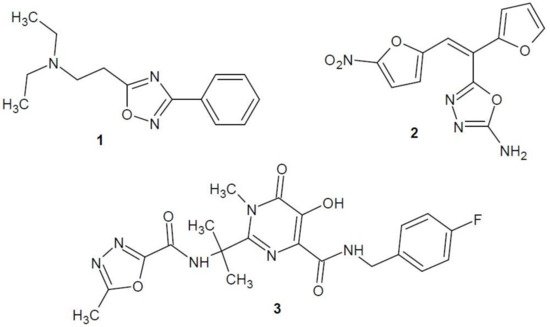 Figure 2. Drugs with oxadiazole core.
Particularly noteworthy are the derivatives of 1,3,4-oxadiazole. The presence of the 1,3,4-oxadiazole ring affects the physicochemical and pharmacokinetic properties of the compounds in which it is present. Compared to other isomeric oxadiazoles, 1,3,4-derivatives show better metabolic stability, water solubility and lower lipophilicity. The 1,3,4-oxadiazole ring also acts as a bioisosteres for carbonyl containing compounds such as esters, amides and carbamates. Oxadiazole ring is used as a substantial part of the pharmacophore, which have the ability to engage with ligand. In some cases, it acts like a flat aromatic linker to provide the appropriate orientation of the molecule [5].
There are numerous literature reports confirming the multidirectional effect of compounds containing the 1,3,4-oxadiazole ring in its structure. Derivatives of this type have antibacterial [6], antimalarial [7], anti-inflammatory [8], antidepressive [9], anticancer [10], analgesic [11] and antiviral effect [12][13].

Growth factors and their transmembrane receptors play a very important role in the normal functioning of cells. These receptors have internal activity of tyrosine kinase enzyme, thus catalysing phosphorylation of proteins associated with signalling intracellular processes, e.g., proliferation, differentiation, and cell apoptosis. One of these receptors is EGFR—epidermal growth factor receptor also known as HER1 (erbB1) and HER2 receptor (erbB2). Their improper activation or overexpression leads to uncontrolled cell growth and thus to the development of cancer. They also play a role in metastasis and angiogenesis of neoplasms, and their inhibition leads to tumour regression. For this reason, these receptors are often used in targeted cancer therapy [14][15][16].
Researchers under the direction of Abou-Seri (2010) received a number of bis-5-mercapto-1,3,4-oxadiazole derivatives. The best anti-proliferative properties against MCF-7 breast cancer cell line were demonstrated by the most lipophilic, dibenzyl derivative 4 (Figure 3). Additional studies of compound 4 for EGFR tyrosine kinase showed significant activity compared to the reference lapatinib [17]. 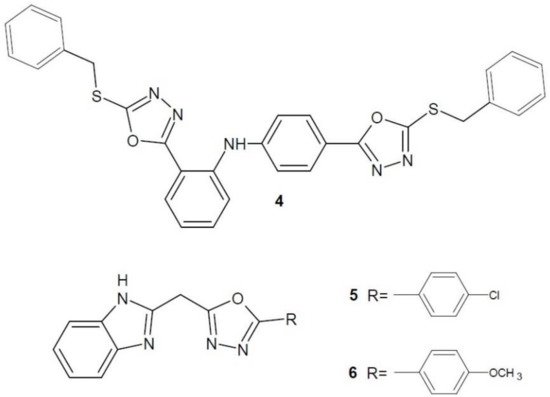 Figure 3. 1,3,4-Oxadiazole derivatives with activity of epidermal growth factor receptor inhibitors.
Akhtar et al. (2017) developed a series of new benzimidazole derivatives of 1,3,4-oxadiazole and tested their cytotoxicity to five cancer cell lines – breast cancer (MCF-7, MDA-MB231), skin cancer (HaCaT), liver cancer (HepG2) and lung cancer (A549). Compounds 5 and 6 (Figure 3) had a stronger cytotoxic effect on breast cancer cells (MCF-7) than the reference compound, i.e., 5-fluorouracil. The obtained compounds were also tested for binding to EGFR and HER2 receptors. It was confirmed that their binding is analogous to the anti-cancer drug inhibiting tyrosine kinase—erlotinib [18].

Angiogenesis, i.e., the formation of new blood vessels, is a physiological process without which the functioning of tissues would be impossible. On the other hand, pathological angiogenesis is the cause of the spread of diseases, e.g., cancer. Vascular endothelial growth factor (VEGF) is the cytokine responsible for this process. It occurs in several isoforms and has three types of transmembrane receptors with tyrosine kinase activity on endothelial cells: VEGFR-1, VEGFR-2 and VEGFR-3. The VEGFR-2 receptor is located on the endothelial cells of blood vessels and is therefore involved in angiogenesis through participation in proliferation, migration and differentiation of these cells [19][20]. Neovascularisation is a key process during carcinogenesis and cancer metastases. Therefore, interrupting the signalling pathway to the VEGFR-2 receptor is an attractive target for cancer therapy.
In 2008, Cai et al. examined the inhibitory activity of pyrrolotriazine derivatives of 1,3,4-oxadiazole against the VEGFR-2 receptor, and the most active derivatives were subjected to human umbilical vein endothelial cells (HUVEC) proliferation assay. The highest inhibitory potential was shown by compounds 7, 8, 9 (Figure 4). Compound 9 was also tested in vivo on human lung cancer cells (L2987) transplanted to mice, which confirmed its anticancer activity [21]. 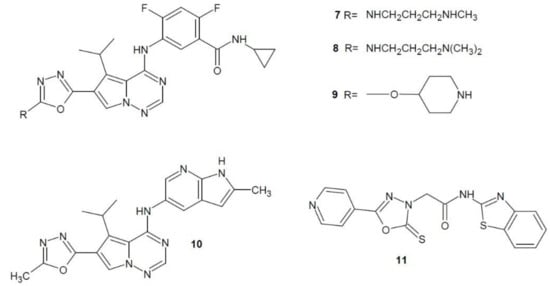 Figure 4. 1,3,4-Oxadiazole derivatives with activity of vascular endothelial growth factor receptor inhibitors.
Ruel et al. (2008) tested the inhibitory effects of other pyrrolotriazine derivatives of 1,3,4-oxadiazole on the VEGFR-2 receptor. The most active derivative was compound 10 (BMS-645737) (Figure 4) which was also pre-clinically tested in vivo on various types of cancers in a heterogeneous model. It showed the highest anti-cancer activity for human lung cancer cells (L2987) [22].
Bhanushali et al. (2017) developed a series of 5-pyridin-4-yl-2-thioxo-1,3,4-oxadiazol-3-yl derivatives and tested them as potential VEGFR-2 inhibitors. The most active compound 11 (Figure 4) showed a significant inhibition of angiogenesis in the CAM sample (Chick Chorioallontoic Membrane) compared to the reference sorafenib. In addition, the conducted in vivo tests have also shown its significant activity. Furthermore, it was examined that it had a high inhibitory potential against VEGFR-2 tyrosine kinase [23].

Endothelin 1 (ET-1) is a vasoactive peptide that binds to two types of antagonistic receptors. Activation of the ETA receptor by endothelin-1 results in the proliferation of cells and increases their survival rate, whereas activation of the ETB receptor results in the apoptosis of cells and decreases the amount of ET-1. ETA receptor overexpression occurs in many types of cancer. By inhibiting the activation of the ETA receptor, while maintaining the activity of the ETB receptor, an anti-cancer effect [24] is achieved.
Zibotentan (12) (Figure 5) is a selective ETA receptor inhibitor tested in vitro for efficacy in colorectal cancer. It showed high anti-cancer activity [25]. However, the third stage of clinical trials of zibotentan in the treatment of castration-resistant prostate cancer (CRPC) was unsuccessful. Further tests of its effectiveness in other types of cancers are planned [26][27]. 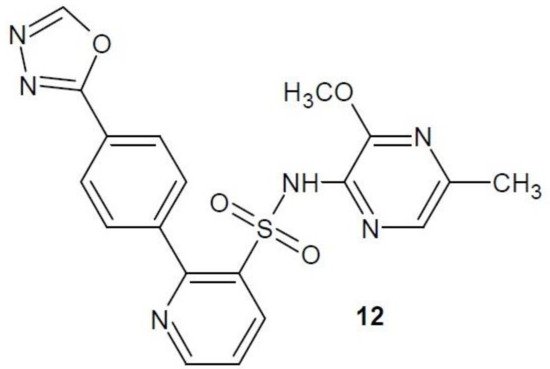 Focal-adhesion kinase (FAK) is a cytoplasmic tyrosine kinase and its main function is to transmit a signal from integrin receptors or growth factor receptors to the intracellular protein cascade. FAK protein takes part in cell cycle regulation, adhesion, migration and cell apoptosis. Enhanced FAK signalling may cause uncontrolled proliferation or migration of cells, which has been observed in the process of cancer development and progression [28]. This explains the use of focal-adhesion kinase inhibitors as anti-cancer drugs.
In 2017, Sun et al. published the results of research on 1,3,4-oxadiazole derivatives as FAK inhibitors. Several phenylpiperazine derivatives of 1,3,4-oxadiazole were studied, the most effective of which seems to be 3-trifluoromethyl-piperazine 13 (Figure 6). Four cancer cell lines were used in cytotoxicity testing: liver cancer (HepG2), cervical cancer (HeLa), colorectal cancer (SW1116) and stomach cancer (BGC823). Compound 13 was the most effective in inhibiting the growth of liver cancer cells (HepG2) compared to the reference compound 5-fluorouracil. The influence of compound 13 on tyrosine kinase activity was also studied. Among all the derivatives obtained, it showed the highest FAK inhibitory activity [29].

Figure 6. 1,3,4-Oxadiazole derivatives with activity of focal-adhesion kinase inhibitors.
In 2018, another team of scientists published the results of research on thiazole and benzothiazole derivatives of 1,3,4-oxadiazole as FAK inhibitors. A number of compounds were tested on three cell lines: human lung cancer (A449), rat glioma (C6) and mouse embryonic fibroblasts (NIH/3T3). The most active derivative 14 (Figure 6) showed a stronger anti-proliferative effect than the cisplatin reference drug against all cell lines. In addition, the compound was characterised by a strong FAK inhibitory activity [30].

Gene expression is regulated by posttranslational modification of histone proteins, e.g., acetylation, methylation, phosphorylation. Acetylation and deacetylation are regulated by two groups of opposing enzymes: histone acetyltransferases (HAT) and histone deacetylases (HDAC), leading to gene transcription or silencing, respectively. The HDAC family contains 18 enzymes involved in the deacetylation and regulation of gene expression. Scientists observed that HDAC overexpression is associated with carcinogenesis and tumour progression, therefore inhibition of the enzyme is one of the mechanisms of anti-cancer drugs. HDAC inhibitors cause cancer cell death in many ways, including apoptosis, autophagy, inhibition of DNA repair and control of angiogenesis [31][32][33].
In 2014, a publication by Valente et al. on new derivatives of 1,3,4-oxadiazole as inhibitors of histone deacetylase was published. Of all the compounds obtained, the most extensive effect was shown by compound 15 (Figure 7). Its anti-proliferative activity against many cell lines was studied, and the most sensitive to its effects were colon adenocarcinoma cell lines (SW620) and all of the studied acute myeloid leukaemia cell lines (U937, HL60, HEL, KG1 and MOLM13). Studies also showed that compound 15 strongly inhibited HDAC histone deacetylases as compared to the reference compound—vorinostat [31]. 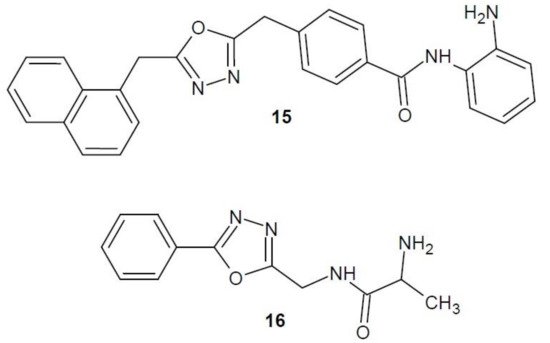 Figure 7. 1,3,4-Oxadiazole derivatives with activity of histone deacetylase inhibitors.
An Indian research team (2016–2017) combined a 1,3,4-oxadiazole molecule with amino acids, alanine or glycine, and studied the effect of the resulting hybrids on the activity of HDAC8, one of the enzymes of the histone deacetylase family. The most active structure turned out to be the derivative 16 (Figure 7). The effectiveness of compound 16 in inhibiting cancer cell proliferation and its mechanism of action have been studied in more detail in vitro. The results confirmed that compound 16 has an inhibitory effect on breast cancer cell growth (MCF-7 and MDA-MB-231), as well as high selectivity against HDAC8. The researchers have also developed a molecular mechanism of action of derivative 16 in breast cancer cells. This molecule induces the internal cell apoptosis through a series of consecutive processes. Selective inhibition of HDAC8 enzyme leads to the activation of p53 protein and change of Bax/Bcl2 protein ratio (decreased expression of Bcl-2 antiapoptotic protein, without influence on the expression of proapoptotic Bax protein). Subsequently, the potential of mitochondrial membrane decreases, cytochrome c is released, thus activating caspase 3 and 9 and leading to the cutting of the PARP enzyme and, eventually, to apoptosis [34][35].

More
© Text is available under the terms and conditions of the Creative Commons Attribution (CC BY) license (http://creativecommons.org/licenses/by/4.0/)
Upload a video for this entry
Information
Subjects: Biochemistry & Molecular Biology
Contributor MDPI registered users' name will be linked to their SciProfiles pages. To register with us, please refer to https://encyclopedia.pub/register :
Piotr Swiatek
View Times: 158
Revisions: 2 times (View History)
Update Time: 13 Sep 2021
Table of Contents
1000/1000
Hot Most Recent