Submitted Successfully!
Thank you for your contribution! You can also upload a video entry related to this topic through the link below:
https://encyclopedia.pub/user/video_add?id=14131
Check Note
2000/2000
VNPs for Anti-Cancer Therapy
Edit
Upload a video
This entry is adapted from 10.3390/vaccines9080830

Naturally occurring viral nanomaterials have gained popularity owing to their biocompatible and biodegradable nature. Plant virus nanoparticles (VNPs) can be used as nanocarriers for a number of biomedical applications. Plant VNPs are inexpensive to produce, safe to administer and efficacious as treatments. Features which distinguish plant viruses from synthetic nanocarriers include stability, flexibility, diversity in shape and size for use in drug delivery and the nontoxic nature of plant viruses in humans. Cancer is one of the most common death causing disease worldwide and it is characterized by uncontrolled rapid cell division and differentiation. VNPs are an ideal choice to apply for cancer treatment owing to the enhanced permeation and retention (EPR) potential of cancer cells for these nanoparticles, whereas VNPs cannot penetrate through healthy tissues due to tightly packed endothelial cells.

Virus size data that is found in different databases has been obtained by transmission electron microscopy (TEM), and virus sizes and architecture differs significantly [1]. A method of nanoparticle tracking analysis (NTA) can be used to determine the size and concentration of viruses and VLPs. At present, this technique has been used to study icosahedral VLPs of Cowpea mosaic virus (CPMV) (Figure 1) [2], spherical VLPs of structurally modified Tobacco mosaic virus (TMV) [3], and VLPs of filamentous Potato virus X (PVX) [4]. Nanoparticle tracking analysis has also been reported to compare the intensity of coated and native helical TMV [5][6]. 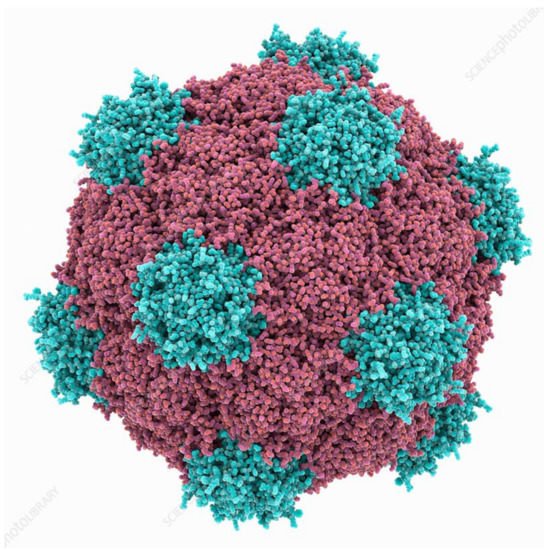 Figure 1. Cowpea mosaic virus structure, Protein subunits in red and blue. Source: fineartamerica.com (accessed on 11 May 2021).
Viruses are composed of outer protein shells that encapsulate the genomic material. The multiple copies of coat proteins that form the virus outer shell of viruses are collectively known as the capsid [7]. Primarily, the capsid occurs in different shapes and sizes and is meant to protect the genomic material to keep viruses safe under extreme environments [8]. Animal viruses are used as delivery vehicles for gene therapy, but the use of these viruses as nanocarriers can potentially create safety issues. Alternatively, plant viruses have not displayed toxicity and thus have received more attention for applications in nanomedicine [9]. The most well studied plant viruses are Tobacco mosaic virus (TMV), Cowpea mosaic virus (CPMV), and Potato virus X (PVX) (Figure 2) [10]. The immense diversity with respect to the shape and size of plant viruses enables them to be tailored for specific applications. For instance, rod shaped viruses are more suitable for penetrating into tumors [11]. The structural integrity of viruses remains intact even when surface properties have been altered through chemical and genetic modification; this allows control over targeting ligands, drugs and contrast agents for imaging [12]. The most interesting properties which give these plant based nanoparticles edge over synthetic nanomaterials include bulk production via host infection and available inexpensive large scale purification methods [13]. 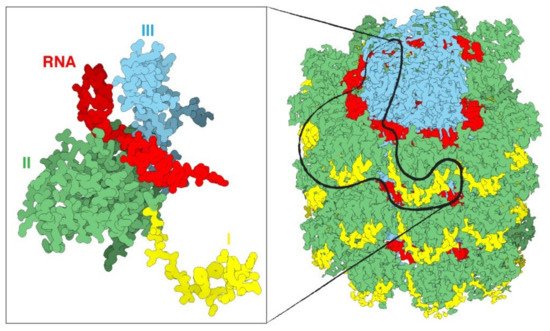 Figure 2. An overview of a portion of the PVX virus (right). The three domains of the protein are shin in yellow, green and cyan, the RNA in red. The magnification on the left displays only one single CP with a fragment of RNA. Source: https://naturemicrobiologycommunity.nature.com/posts/61805-a-detailed-view-of-a-filamentous-virus-potato-virus-x (accessed on 11 May 2021).
Researchers have the choice of selecting the most appropriate system for any given application owing to the diversity of plant virus shape and size. A wide range of nanomedical applications have been demonstrated using the capsids of icosahedral viruses [14]. Rod shaped viruses with a high aspect ratio have superior penetration into tumor tissue [11][15]. Various chemical and genetic approaches are reported to control the virus surface properties without affecting structural integrity, and that allow control on the attachment sites of drug molecules or contrast agents on the virus surface [12]. Plant-virus capsid pores are also reported to be employed to encapsulate small therapeutic molecules [16].