Submitted Successfully!
Thank you for your contribution! You can also upload a video entry related to this topic through the link below:
https://encyclopedia.pub/user/video_add?id=14073
Check Note
2000/2000
Polyphenoloxidase (PPO)
Edit
Upload a video
This entry is adapted from 10.3390/app11177813

Fresh-cut produce are quite popular among consumers due to their eating ease, high quality and functional content. However, some of the processing steps taking place during minimal processing (such as cutting, peeling, draining, etc.) might speed up decay, e.g., microbial growth, dehydration or browning. When it comes to the latter, polyphenol oxidase (PPO) plays an important role, being the center of many works focused on the understanding of its reaction mechanism and the application of conservative techniques. The aim of this review study was to compare recent research about the effect of PPO on minimally processed fruits and vegetables, trying to understand the way it acts, the measurement of its activity and current treatments, such as modified atmosphere packaging, washing treatments or edible coatings, among others. In conclusion, the combination of conservation techniques (that is, hurdle technology) is vital to guarantee global quality in minimally processed fruits and vegetables, including synergistic effects which will allow the use of mild treatment conditions to decrease PPO activity. However, further research is required to clearly understand PPO inhibition in trendy techniques such as irradiation.

Minimally processed fruits and vegetables are highly demanded by consumers [1], growing their sales all over the world, as in the case of Europe [2]. This might be due to an increasing concern about health and lack of time to cook properly. Furthermore, minimally processed fruits and vegetables provide high functional and ready-to-eat food which are convenient products nowadays. Thus, there are a considerable amount of vegetables and fruits undergoing this technology, such as lettuce, cabbage, eggplant, apples, pears, peaches, plums, nectarines, etc. On account of the fact that fresh-cut produces come from whole vegetables and fruits, it is expected that these products have similar functional properties. Consequently, they contain high levels of fiber, minerals or antioxidants such as vitamins C and E, carotenoids, glucosinolates, polyphenols, etc. [3][4][5][6]. This fact has supposed an interesting research field for scientists, and its relevance has continuously increased. The trend in research about fresh-cut or minimally processed fruits and vegetables is shown in Figure 1. 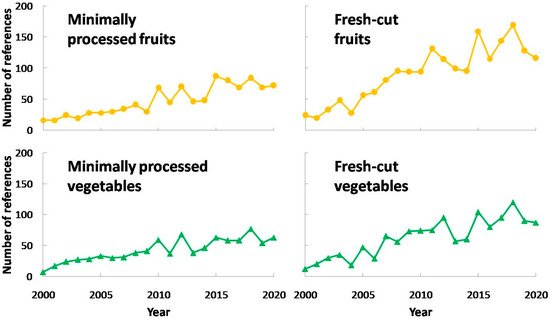 However, even though the processing of fresh-cut fruits and vegetables is minimal, some aspects such as cutting and peeling promote a faster deterioration [8], involving physiological, biochemical and microbiological changes [9]. Hence, there are a lot of enzymes that take part in these changes, such as pectin methylesterase, polygalacturonase (both of them affecting texture), lipooxidase (generating off-flavor compounds) and polyphenol oxidase (EC 1.14.18.1 or PPO), among others. The latter plays an important role on visual quality decay causing browning, as it will be discussed in following sections. This deterioration might change consumers’ choice as visual appearance is one of the highest rated aspects considered in order to purchase minimally processed fruits and vegetables. As a consequence, PPO has been widely studied (both in whole or minimally processed products) in order to characterize its content or to avoid its effect on quality of fruits or vegetables, (see Figure 2 ). 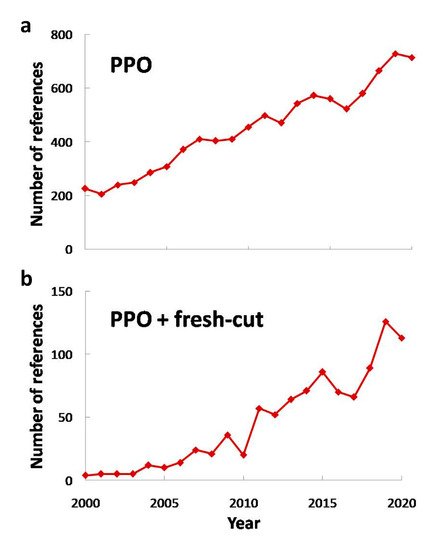 This way, PPO has been widely researched, and its interest has increased in the last two decades ( Figure 2 a). The same trend was observed for research about PPO and fresh-cut produce ( Figure 2 b), and if Figure 1 is taken into account, it can be noted that research about fresh-cut produce and its combination with PPO research are almost equivalent, pointing out the need of PPO characterization and the study of its consequences in fresh-cut fruits and vegetables in every research work in this field.

As explained earlier, there is a special need to assess PPO activity (among other enzymes) in order to assess its effect on browning. Even though there are different ways to assess PPO activity [10], the most common one used in fresh-cut produce was by spectrophotometry. In this case, whole produce and in-vitro assays follow similar procedures. In short, the steps are the ones gathered in Figure 3 . Additionally, Table 1 and Table 2 shows some details about PPO activity extraction and determination for vegetables and fruits, respectively. 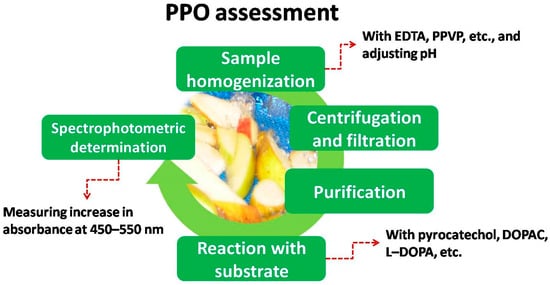 Thus, homogenization is required, mixing up the sample with some components such as EDTA, PMSF or PVPP and adjusting pH (generally between 6 and 8) with buffer [10]. After centrifugation and filtration, the spectrophotometric reaction takes place adding the extract to a reactive environment with suitable substrates and adjusting pH. Molecular structures of some of the most used substrates are shown in Figure 4 . 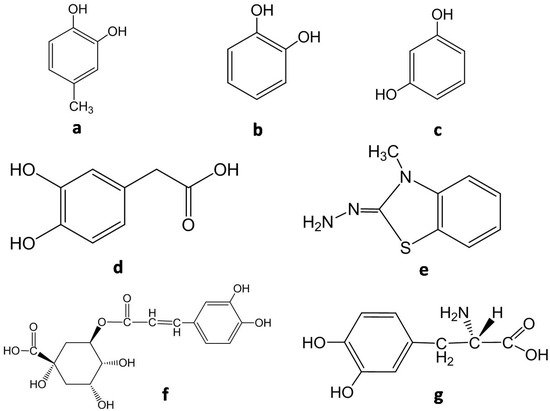 Finally, the increase in absorbance is measured at the beginning of the reaction (usually for 3 min), using wavelengths from 450 to 550. Figure 3 and Figure 4 show some of the most common extracts used in spectrophotometric determination of PPO activity applied to different fresh-cut vegetables and fruits, respectively.

According to many researchers, as included in Figure 5 , the main factors affecting PPO activity are temperature, pH, cell integrity, pre-harvest conditions and microbial activity, which will be explained in the following sections.

Figure 5. Influence of main factors on PPO activity, indicating its positive (green down arrow) or negative effect (red up arrow) and some specific conditions.

Apart from the activity of endogenous quality degrading enzymes, spoilage microorganism reaction considerably shortens the shelf life of fruit and vegetable products, both whole and fresh-cut produce [48][49]. Furthermore, microbial growth can be a matter of concern, with many studies considering microbial safety in minimally processed samples [50], as in the case of cantaloupe pieces [51].

As included in some studies, the effect of enzymes and microbial growth on shelf life of minimally processed fruits and vegetables could be synergistic, as microorganisms can worsen cell integrity of tissues, provoking cell lysis, which is highly related to the increase in enzyme activity, as enzymes and substrates are easily put in contact, accelerating decay in fruits and vegetables (both whole and fresh-cut samples) [52]. On the other hand, microbial growth and enzymatic reactions can present a common starting point (i.e., cell lysis) to put some components included in cell content (such as sugar or phenols for microbial counts or PPO activity, respectively), and consequently these two adverse effects can act in parallel. As a consequence, if some techniques promote cell reinforcement are used (such as the application of calcium treatments), a combined decrease in microbial and PPO activity can be observed, as outlined below.

This way, the effect of microbiological activity on some visual defects has been investigated in several papers that considered the relationship between psychrotrophic counts and visual decay [51]. As some authors have pointed out, the use of protective treatments seemed to be related to a direct decrease in browning, enzyme activity (such as PPO) and microbial growth [50][53], as in the case of edible coatings applied to fresh-cut fruits and vegetables [54]. Specifically, the reduction of microbial population may result in PPO activity inhibition, on account of the fact that pectinolytic micro-organisms could break down cell walls resulting in stress-related exposure of enzymes and substrates, which also could lead to enzymatic browning. Hence, some barriers such as modified atmosphere packaging or washing treatments might contribute (besides their direct effects on browning inhibition) to reduce microbial population and therefore reduce PPO activity, improving visual quality [55][56], as explained in many papers included in this review, although the decrease in microbial growth is not thoroughly covered in this work.

In order to avoid the negative effects of PPO activity, or at least to reduce them, many treatments have been used in fresh-cut or minimally processed produces. Some of them can be exclusively used to reduce PPO activity, whereas others can show other beneficial effects on fresh-cut produce, such asantimicrobial effect, inhibition on other enzymes, etc. On the other hand, some of these treatments can be combined, such asthe use of washing with antioxidants or essential oils, the use of edible coatings containing antioxidants or the combined use of washing and modified atmosphere packaging, presenting additive or synergistic effects in many cases. In any case, some of the treatments that have drawn attention to researchers are included in Figure 6 . It should be pointed out that the search for mild treatments (by combining techniques or using the hurdle technology) seems to be one interesting and resourceful option for researchers, in order to avoid other undesirable effects on fresh-cut fruits and vegetables [57]. 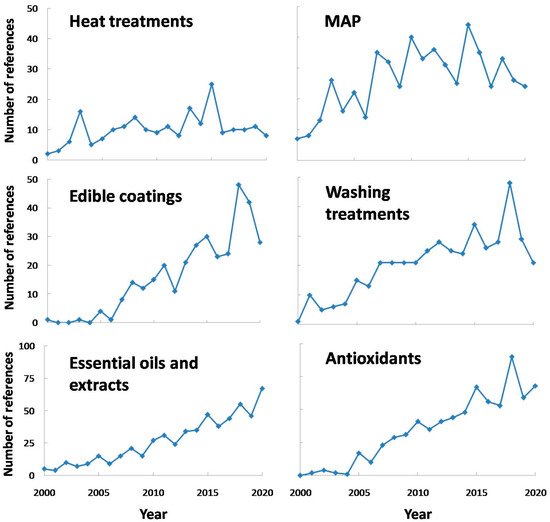 This product could be used included in washing treatments, as the literature showed promising results when it comes to PPO control. As some authors have appointed, the use of salicylic acid (SA) in washing treatments have showed good results concerning PPO inhibition in fresh-cut chestnut, and its effect was higher with concentration (up to 10 mM or at least 0.3 g/L, depending on the case). However, its inhibition properties are not clear yet, needing further studies [59][60].

Ultrasound (US) might cause enzyme inactivation by cell lysis due to vibration energy, which produces cavitation bubbles and temporarily generates spots of high pressure and temperature when imploded. Thus, its use might be suitable especially when combined with antioxidant treatments (normally included in washing treatments), just as in the case of fresh-cut apples. Specifically, PPO activity was reduced by combining US (40 kHz) and ascorbic acid (1%), pointing out the fact that the individual application of these treatments was not effective at inactivating enzyme activity [32]. Other recent study was focused on the suitability of this technique combined with ascorbic acid and citric acid for fresh-cut potatoes, showing around 40 % decrease in PPO activity in treated samples, compared to control samples [26].

More
© Text is available under the terms and conditions of the Creative Commons Attribution (CC BY) license (http://creativecommons.org/licenses/by/4.0/)
Upload a video for this entry
Information
Subjects: Biochemistry & Molecular Biology
Contributor MDPI registered users' name will be linked to their SciProfiles pages. To register with us, please refer to https://encyclopedia.pub/register :
Sergio Nogales-Delgado
View Times: 42
Revisions: 2 times (View History)
Update Time: 10 Sep 2021
Table of Contents
1000/1000
Hot Most Recent