Submitted Successfully!
Thank you for your contribution! You can also upload a video entry related to this topic through the link below:
https://encyclopedia.pub/user/video_add?id=14055
Check Note
2000/2000
Spring Wheat
Edit
Upload a video
This entry is adapted from 10.3390/plants10030455

Spring wheat as durum or bread wheat is grown worldwide in mega-environments (ME; 1-6) at latitudes <40 degree during the winter or early spring season and flower in short days with relatively little vernalization requirement. Based on protein contents, kernel color and hardness of endosperm, spring wheat is classified into hard red, soft white and hard white spring with high baking quality.

Spring wheat, is a tetraploid (durum) or hexaploid (bread wheat) that is grown worldwide covering approximately 80 m ha in developing countries. Based on the growth habit, spring wheat can flower under short days with relatively little exposure to vernalization and the crop usually matures within 100-200 days. It is usually grown at latitudes <40o during the winter and early spring season [1]. Though relatively insensitive to photoperiod and vernalizing cold compared to winter wheat, flowering time and phenological pattern of spring wheat is largely a function of major genes Ppd and Vrn as well as earliness per se (Eps) which determines the temperature baseline for crop development [2][3]. 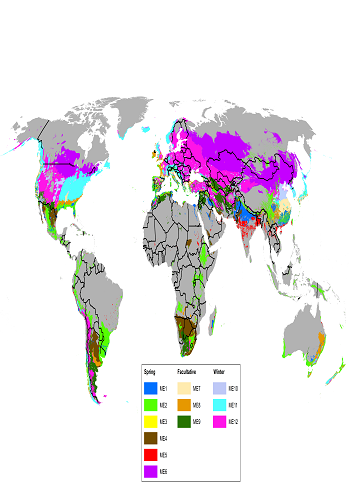 According to the International Maize and Wheat Improvement Center (CIMMYT) classification, among 12 mega-environments (MEs), spring wheat is produced in six meg-environments including irrigated temperate, high rainfall, acid soils, low rainfall, high temperature and high latitude showing its diverse distribution [4]. These MEs especially ME1-ME6 are classified for spring wheat, ME7–ME9 for facultative and ME10–ME12 for winter wheat (Figure 1). The concept of MEs classification in broaden is used to breed the characteristic germplasm for target environment with adaptation to major biotic and abiotic stresses (Braun et al., 2010). Later this classification has been expanded to classify these MEs based on geospatial information to address the impacts of climate change on wheat production [5][6].  For instance, ME1–ME5 include sub-tropical to tropical regions (ME5) where spring wheat is cultivated on about 9 million ha that experiences high temperature stress induced yield losses [7]. The ME5 with its subdivision (ME5A and ME5B) for humid and dry conditions, respectively include Eastern Gangetic Plains of India, Nepal and Bangladesh under 5B and Sudan and upper Egypt for example under 5A. Under changing climate conditions, with increasing temperature, much of the wheat area under ME1 is expected to change to ME5 (Hodson and White, 2007 a, b). However, increased temperature with elevated CO2 atmospheric levels may mitigate some of the negative impacts on wheat productivity and water use efficiency in ME1. Without significant breeding and crop management interventions, increased temperatures are expected to reduce area in ME2A, ME3, ME4 and ME5 for wheat production (Braun et al. 2010). Spring planted crops can be easily recognized by growth stages following Zadoks system [8].