Submitted Successfully!
Thank you for your contribution! You can also upload a video entry related to this topic through the link below:
https://encyclopedia.pub/user/video_add?id=14054
Check Note
2000/2000
Korean Red Ginseng Ameliorates Fatigue
Edit
Upload a video
This entry is adapted from 10.3390/nu13093121

Fatigue is both a physiological defense response and a disease-associated symptom; therefore, it is a common complaint in both the general population and patients with various disorders. Fatigue can be generally classified according to duration as acute (≤1 month), prolonged (1< and ≤6 months), and chronic, lasting over 6 months. Chronic fatigue is the main fatigue-related issue in the clinic, and its prevalence is approximately 10% in the general population. In particular, medically unexplained chronic fatigue, such as chronic fatigue syndrome (CFS), has a more serious impact on health-related quality of life than brain stroke, angina pectoris, or schizophrenia.

Fatigue is both a physiological defense response and a disease-associated symptom; therefore, it is a common complaint in both the general population and patients with various disorders [1]. Fatigue can be generally classified according to duration as acute (≤1 month), prolonged (1< and ≤6 months), and chronic, lasting over 6 months [2]. Chronic fatigue is the main fatigue-related issue in the clinic, and its prevalence is approximately 10% in the general population [3]. In particular, medically unexplained chronic fatigue, such as chronic fatigue syndrome (CFS), has a more serious impact on health-related quality of life than brain stroke, angina pectoris, or schizophrenia [4].
Additionally, central fatigue is a neuromuscular dysfunction, a notable feature of chronic fatigue, that is caused by biochemical alterations in the brain [5]. Unlike peripheral fatigue, which is caused by energy-associated disturbances, mainly in muscles, central fatigue results from dysfunction of synaptic transmission in the central nervous system (CNS) [6]. Clinically, prolonged sleep disturbance and chronic stress are presumed to be inducers of central fatigue and are also major symptoms of pathologic central fatigue and chronic fatigue [7]. Important hypotheses on the pathophysiologic mechanisms of pathologic fatigue like CFS involve disruption of neuroendocrinological homeostasis resulting, for example, from chronic sleep deprivation (SD) [8].
Sleep is believed to play a key role in the maintenance of brain function and health, as well as in protection against and recovery from central fatigue [5][9]. Approximately 60% of subjects with chronic fatigue have comorbid sleep disorders, including insomnia, sleep apnea, and periodic limb movement disorder [10]. It is well known that chronic sleep restriction affects neuronal activity within the brain, altering serotonin (5-hydroxytryptamine, 5-HT) and dopamine (DA) levels, which are closely associated with the sleep/wake cycle [11]. While cortisol levels in the blood are elevated in the context of acute stress and general fatigue, this stress hormone is frequently depleted by prolonged SD and in subjects with severe central fatigue [12].
Panax ginseng (P. ginseng) is one of the most frequently employed herbs for various health issues, and it has shown moderate effects in treating fatigue [13][14]. Especially, Korean red ginseng (KRG), which is manufactured by repeated steaming and drying of raw ginseng, is known to exert pharmacologic activities, including antifatigue, antioxidative, and immunomodulatory effects [15][16]. To date, studies on the anti-fatigue effects of P. ginseng and KRG have focused on general or peripheral fatigue and have mainly involved measurement of energy metabolite- and oxidative stress-related marker levels in blood and tissues from clinical patients and animal models [17]. However, regarding central fatigue, evidence of the effects of P. ginseng and KRG is lacking.

Impaired exercise capability is a common complaint of subjects with chronic fatigue. In particular, sufferers of CFS are vulnerable to becoming fatigued after performing daily tasks in the home without exhibiting any muscular defects, which is referred to as postexertional malaise (PEM) [18]. The low force generated by motor units in CFS subjects is known to result from muscle membrane dysfunction caused by central neural dysregulation [19]. The 5-HT hyperactivity in the CNS is the most well-known alteration in neurotransmitters that inhibits proprioceptive sensory and muscular contractions [20]. Ginseng improves physical function in both healthy individuals and subjects complaining of fatigue [14][21]. Likewise, in the present study, KRG improved exercise performance in the rotarod test under both normal conditions and after SD. Rotarod performance reflects integrated motor functions, including muscle endurance, balance, and coordination [22].
The activity of 5-HT in the brain is strongly and positively correlated with a lack of sleep [23]. A human study revealed that a single day of SD elevated the plasma level of tryptophan, a precursor of 5-HT, by 20% [24]. As expected, 6 cycles of SD markedly elevated the 5-HT level and that of its synthetase (TPH2), but these alterations were significantly normalized by KRG treatment. In the context of chronic SD, overproduced 5-HT spills into the extrasynaptic space and activates 5HT1AR (a representative inhibitory receptor) on the initial axon segments of motor neurons, leading to inhibition of neuronal output [6]. The 5-HT level is controlled by the balance between its release and reuptake, which are determined by the p-GR/GR ratio (desensitizing 5HT1AR results in release and activation) and the expression of its reuptake transporter (5-HTT) in the RN [25][26]. Six cycles of SD increased the p-GR/GR ratio without changing the expression of 5HT1AR in the RN. A large amount of previous data showed that 5HT1AR desensitization (loss of the inhibitory function of 5-HT release) usually occurs without a change in the protein level of 5HT1AR, as shown in our results [25]. KRG treatment did not affect the release of 5-HT (GR activity or HT1AR expression) but increased its reuptake (increase in 5-HTT level). This suggests that administration of KRG might regulate serotonergic activity by promoting the reuptake of 5-HT in the synaptic space and that this may be the main mechanism of its anti-central fatigue properties.
Sufferers of chronic fatigue rarely experience restorative sleep and exhibit disrupted neuroendocrinological homeostasis [8]. A total of 87–95% of patients with CFS experience unrefreshing sleep [27]. Prolonged sleep disturbance dysregulates the hypothalamic–pituitary–adrenal (HPA) axis, especially in the metabolism of cortisol, which plays an important role in the stress response and the formation of sleep architecture [28]. Unlike acute stress, chronic stress induces low levels of serum cortisol and dysfunction of GR dysfunction in the hypothalamus by impeding its translocation and phosphorylation, resulting in a condition that is sometimes called adrenal fatigue [29]. In our SD model, serum corticosterone was almost completely depleted, and the GR ratio in the hypothalamus was increased; however, KRG treatment significantly attenuated these alterations in serum corticosterone levels and the p-GR/GR ratio. Several clinical studies have shown that serum corticosterone levels can be normalized by therapeutic agents, resulting in positive outcomes for patients with chronic fatigue [30]. The hypothalamus is a central region that responds to stress, sleep, and fatigue, and hypothalamic neurons can be damaged under extremely unfavorable conditions [31]. BDNF supports neuronal survival, growth, and differentiation and may indicate the health status of the hypothalamus [32]. In our study, KRG treatment significantly attenuated the SD-induced downregulation of the expression of both BDNF and its transcription factor (as indicated by the p-CREB/CREB ratio).
In modern society, it is common for individuals to have trouble sleeping in terms of both quantitative and qualitative parameters, as approximately 8–18% of the general population worldwide experience such issues [33]. An increase in 5-HT levels within the CNS resulting from sleep disturbance acts as a homeostatic pressure that causes symptoms such as drowsiness, lethargy, and loss of strength, leading the individual to rest [23]. In contrast with decreased 5-HT levels, decreased DA levels in the RN under chronic SD conditions lead to less activity and less arousal [34]. In our study, KRG treatment reversed the SD-induced reduction in the levels of DA and TH, which are enzymes involved in DA synthesis, in the RN (Figure 1), indicating that KRG balanced the levels of these neurochemicals. Some RCTs have proven that AA exerts antifatigue effects [35][36], so we used it as a positive control in this study. Treatment with 100 mg/kg AA modulated the levels of 5-HT (resulting in a much lower level than that induced by any dose of KRG, p < 0.01, data not shown) and DA (exhibiting a similar effect as KRG); however, we did not observe improvements in exercise performance or corticosterone levels in the blood. Presumably, exercise performance was not improved because the 5-HT level was 2-fold higher than that under normal conditions, and the changes in corticosterone levels and GR function in the hypothalamus were not significantly ameliorated. Considering the results obtained for AA, further pathophysiological studies on 5-HT- and corticosterone-related mechanisms of central fatigue are needed. 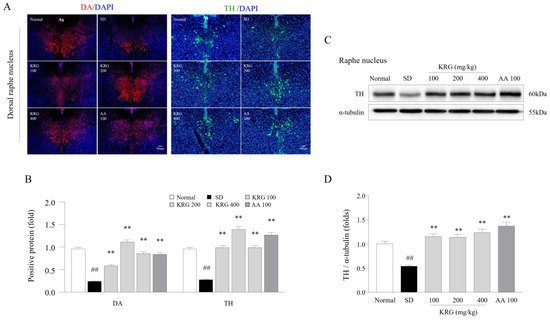 Figure 1. Effects of KRG on the levels of dopaminergic activity-related molecules in the raphe nucleus. The relative DA and TH levels in the DRN were measured using immunofluorescence (A), and the relative DA and TH levels were semiquantified (B) (n = 3). Representative photomicrographs were taken at a magnification of 100×. Western blot analysis was used to evaluate TH protein levels in the RN (C), which were semiquantified (D) (n = 5). The data are expressed as the means ± standard deviations (n = 3 or 5). ##, p < 0.01 compared with the normal group; **, p < 0.01 compared with the SD group.
No conventional therapeutics for chronic fatigue are available yet; thus, many nonresponders to rest use complementary therapies, including herbal medicines [37]. Traditionally, P. ginseng and KRG have been used as tonics for increasing vital energy and recovering from fatigue in eastern Asia. A few studies revealed the anti-fatigue effects of KRG by clinical (180 Chinese participants or 50 Korean patients) and preclinical (mice) investigation; however, their focus of anti-fatigue effect was not based on neurobiological underlying mechanism [38][39][40]. The present study is the first evidence for the anti-fatigue effect of KRG focusing on neurochemical alterations related to fatigue. The dose of KRG used in the present study was chosen based on the dose commonly used in the clinic, i.e., 2 g in adults. As limitations, KRG generally contains more ginsenosides, including Rg3, than P. ginseng [41]. We currently do not know which components of KRG are mainly responsible for its effects and whether it has similar effects on severe central fatigue in humans, such as in those suffering from CFS. Additionally, owing to the mechanism of central fatigue related to CNS factors, precise electrophysiological and micro histological studies are needed to support whether motor dysfunctions occurred due to peripheral factors such as muscular defects.

KRG can protect against or alleviate fatigue related to chronic SD which could contribute to central fatigue. The underlying mechanisms may involve the modulation of neurotransmitters, including serotonin in the brain, and corticosterone. Our data suggest that the therapeutic potential of KRG for patients suffering from severe fatigue should be evaluated clinically in the future.

More
© Text is available under the terms and conditions of the Creative Commons Attribution (CC BY) license (http://creativecommons.org/licenses/by/4.0/)
Upload a video for this entry
Information
Subjects: Others
Contributor MDPI registered users' name will be linked to their SciProfiles pages. To register with us, please refer to https://encyclopedia.pub/register :
Chang Gue Son
View Times: 52
Revisions: 2 times (View History)
Update Time: 10 Sep 2021
Table of Contents
1000/1000
Hot Most Recent