Submitted Successfully!
Thank you for your contribution! You can also upload a video entry related to this topic through the link below:
https://encyclopedia.pub/user/video_add?id=14053
Check Note
2000/2000
Cancer-Cell Migration in Bladder Carcinoma
Edit
Upload a video
This entry is adapted from 10.3390/cancers13174474

Urothelial carcinoma of the bladder (UCB) is among the top 10 most common cancers in the world, with an estimated 80,000 new cases and 17,000 deaths in the United States each year. Significant advances have been made in the management of bladder cancer since the 1990s. More accurate staging has been achieved with refined tissue imaging, and advances in surgical techniques have been combined with improved chemotherapy regimens. Even more, the 5-year survival rate for patients with non-muscle invasive UCB is over 90% and radical cystectomy is the treatment of choice for patients with surgically resectable disease without evidence of metastatic disease. However, patients with muscle-invasive bladder cancer or disseminated disease have a much lower survival rate, suggesting that the occurrence of metastasis has a significant impact on the prognosis of patients with bladder cancer. Considering the impact of metastatic disease on treatment options and patient prognosis, the importance of timely detection and prevention of metastasis in UCB cannot be overemphasized.

In cancer progression, S1PR1 is thought to be highly expressed in bladder cancer cells and is associated with poor patient prognosis [1]. S1P can promote cancer cell viability, survival, growth, and transformation by activating S1PR1 [2]. In addition, S1PR1 overexpression is associated with the convening of regulatory T cells (Treg) [3], suggesting S1PR1 as a potential prognostic biomarker and therapeutic target for UCB patients. Clinically, FTY-720 (Fingolimod) is used as an S1PR1 inhibitor and is widely used in multiple sclerosis or as an immunomodulator [4][5]. FTY-720 is reported to promote apoptosis of bladder cancer cells [6]. 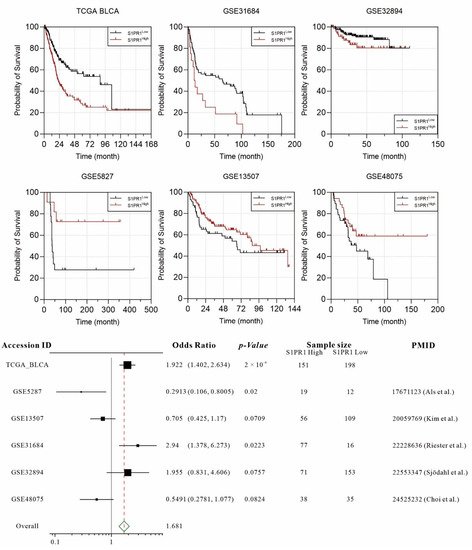 2.2. Differences in S1PR1 Expression and Prognosis of Patients with Bladder Cancer May Be Related to the Degree of Neutrophil Infiltration 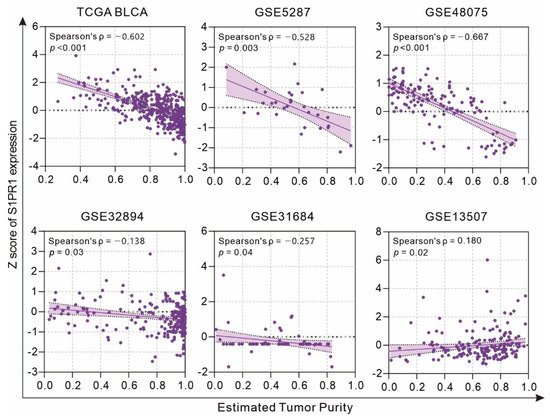 Figure 2. Association of S1PR1 expression with tumor purity.
Further evaluation of the correlation between S1PR1 and immune cell populations by QUANTISEQ showed that S1PR1 expression was positively correlated with B cells, macrophage (M1 and M2), and regulatory T cells in all databases (Figure 3). Interestingly, although not all correlations were significant, S1PR1 was positively correlated with neutrophil infiltration in all three databases with better prognosis (GSE5287: ρ = 0.47, GSE13507: ρ = 0.16, GSE48075: ρ = 0.082). In contrast, S1PR1 was negatively correlated with neutrophil (TCGA BLCA: ρ = −0.094, GSE32894: ρ = −0.047, GSE31684: ρ = −0.21) in the three databases where S1PR1 was associated with poorer prognosis. This suggests that the enriched neutrophil infiltration may directly affect the prognosis prediction of bladder cancer patients using S1PR1 expression. 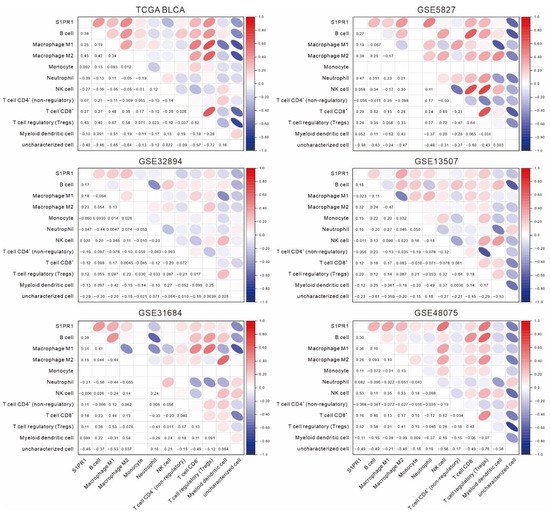 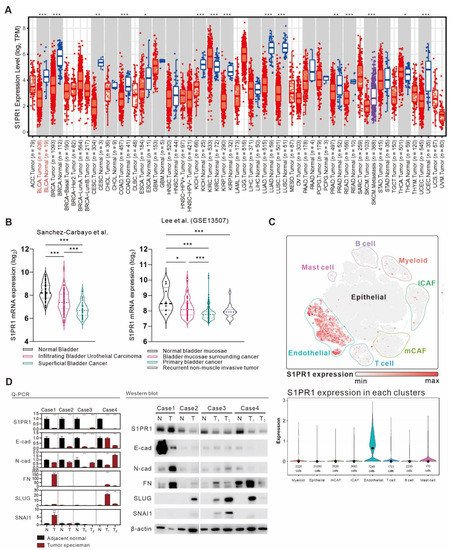 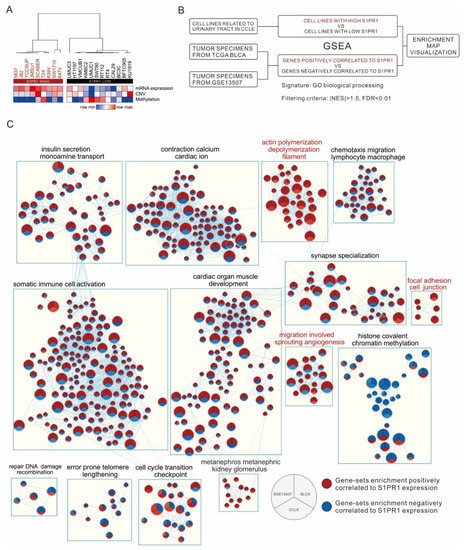 2.5. S1PR1 Expression Shows an Opposite Association with the Promoting of Epithelial–Mesenchymal Transition

Among the 21 uroepithelial cancer cell lines, only four cell lines, T24, J82, JMSU1, and SCABER, expressed high amounts of S1PR1, and its mRNA expression was not even detected in most cell lines. The expression of S1PR1 was positively correlated with the variation of copy number, especially in JMSU1 and SCABER, which had a high copy number of the S1PR1 gene (Figure 4A). Only the J82 bladder cancer cell line has a near normal copy number and moderate mRNA expression of the S1PR1 gene. Therefore, to avoid potential interference with genetic abnormalities, the J82 bladder cancer cell line was used to establish a stable expression of S1PR1 targeting shRNA clone (Figure 6A–C). In addition, the control cells (J82 shLuc) were transfected with pcDNA3.1-S1PR1 plasmids for overexpression (Figure 6D–F). 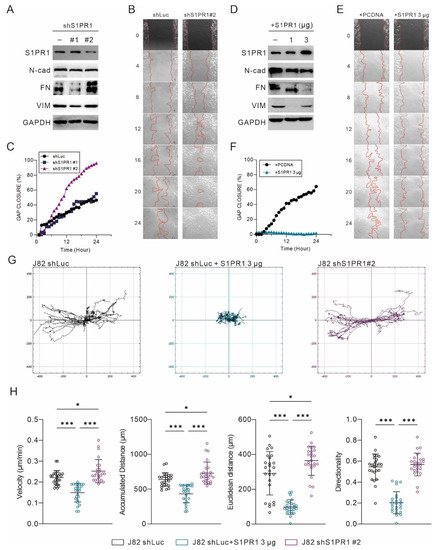 2.6. The Administration of FTY-720 Promotes EMT in Bladder Carcinoma

FTY-720 is identified to inhibit cell proliferation and promote apoptosis by regulating S1PR1; however, the effect of FTY-720 on EMT in bladder cancer remains unknown. Transwell migration assay showed that the metastatic capacity of J82 increased with increasing FTY-720 treatment dose (Figure 7A), and the total cell coverage area was significantly increased with 2 and 5 μM FTY-720 treatment (Figure 7B). Similarly, FTY720 treatment inhibited E-cadherin expression and promoted mesenchymal marker expression, a phenomenon that was disturbed by the addition of S1P, but not in RT4 cells that did not express S1PR1 (Figure 7C). In the wound healing assay, treatment with FTY720 promoted gap closure, especially at 48 h, with a significant difference. In contrast, FTY720 treatment in the presence of S1P had no significant effect on gap closure (Figure 7D), suggesting that inhibition of S1PR1 by FTY720 promoted EMT in bladder cancer cells. Finally, to understand the overall effect of FTY720 treatment on human bladder cancer tumors, we established a patient-derived tumor culture model [20] (Figure 7E). A decrease in E-cadherin and increase in mesenchymal marker due to FTY720 treatment was observed in all four cases (Figure 7F), suggesting that bladder cancer tumors and cell lines respond similarly to FTY-720 treatment. In particular, in the case of PDC#4, the response to FTY720 in adjacent normal tissues and bladder cancer tumors showed an opposite trend, implying that FTY-720 may have divergent responses in different types of tissues or cancers. 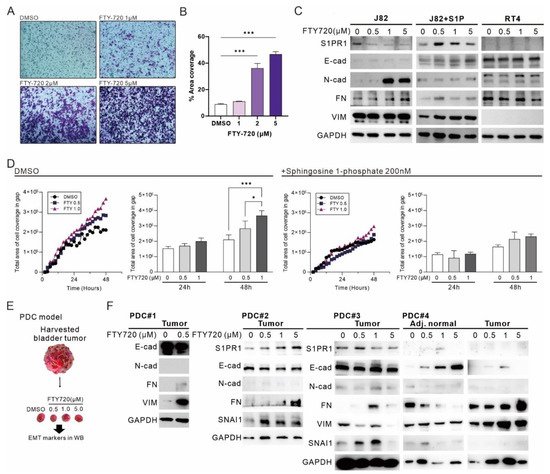 Figure 7. The administration of FTY-720 promotes EMT in bladder carcinoma. (A) Transwell migration assay showing the effect of FTY-720 treatment for 24 h (×100). (B) Area coverage (%) was calculated by quantifying the ratio of cell coverage per field using ImageJ. (C) Western blot showed the expression of S1PR1- and EMT-related markers after different dosage treatment of FTY-720 in J82 and RT4. Sphingosine 1-phosphate (200 nM) was added at the same time of FTY-720 treatment. (D) J82 cell gap coverage curves treated with FTY-720 in the presence and absence of S1P and statistical analysis of the number of cells in the gap at 24 h and 48 h. The curve data are presented as mean values only to reduce reading interference. (E) Illustration of patient-derived tumor culture (PDC) model. (F) Western blot showed four sets of clinical bladder cancer tumors with S1PR1- and EMT-related marker expression measured 48 h after FTY-720 addition. Bar charts are presented as the mean ± SD based on three independent experiments. * p < 0.05, *** p < 0.001 (for uncropped Western Blot images, please refer to Supplementary File S1).

The TCGA database shows that S1PR1 expression is significantly higher in normal tissues than in tumor tissues for most cancers (Figure 3A). The work of Sanchez-Carbayo et al. and Lee et al. showed that S1PR1 expression was reduced at low grade tumor (Figure 3B). Further, the single-cell RNA sequencing results reported by Chen et al. showed that most S1PR1 expression was from endothelial cells and a few from multiple immune cells, both of which were underrepresented in low grade tumor (Figure 3C). These results suggest that the expression of S1PR1 might be deeply affected by the purity of tumor cell composition in the lesioned tissue. Samples collected from high-grade tumor cells are more likely to be adulterated with normal tissue, which may explain the association of high S1PR1 expression with poor prognosis observed in some databases. Nevertheless, whether S1PR1 expression in tumor cell may affect the generation of tumor-associated endothelial cells requires further investigation. As our analysis shows that S1PR1 expression is associated with angiogenesis (Figure 3C), it is possible that bladder cancer cells overexpressing S1PR1 may affect tumor progression by altering microenvironmental angiogenesis [21][22][23]. When S1PR1 expression was manipulated in J82, it was shown that overexpression of S1PR1 had an inhibitory effect on bladder cancer cell migration, possibly associated with enhanced cellular apposition, echoing the analysis in Figure 3C. Conversely, shRNA interference with S1PR1 expression or inhibition of S1PR1 by FTY-720 accelerated bladder cancer cell migration, and the addition of S1P antagonized the effect of FTY-720. Moreover, a similar phenomenon could be observed in the patient-derived tumor primary culture model, suggesting that clinical inhibition of S1PR1 may cause accelerated metastasis of bladder cancer cells.
High expression of S1PR1 was significantly associated with poor prognosis in multiple cancer databases, raising the possibility of its potential role in promoting tumorigenesis. Based on this inference, FTY-720 has been reported and demonstrated to induce apoptosis in a variety of cancer cells, including bladder cancer [6][24]. Moreover, the mechanism of EMT inhibition by FTY-720 in cholangiocarcinoma and glioblastoma has also been proposed [25][26]. However, our study clearly indicates that reduction of S1PR1 expression by human manipulation may cause a promotion in EMT in bladder cancer cells and patient tumor tissue, a phenomenon consistent with FTY-720 treatment. Different responses to FTY-720 in normal or tumor tissues also indicate divergences in response between various types of tissues or cancers; this may be due to the fact that normal tissue is usually rich in endothelium [27][28]. Although a majority of the literature has confirmed the induction of apoptosis in cancer cells by FTY-720, we still need to pay attention to its potential role in EMT induction. Furthermore, whether the apoptosis induction caused by FTY-720 is related to the EMT-induced anoikis needs to be further clarified. The inhibition of S1PR1 contributes to the reduced interaction with the ECM, thus allowing a higher migration ability. Cell proliferation may be reduced as a result and apoptosis may occur owing to separation from the matrix [29]. Furthermore, cancer cells may thus develop an anti-anoikis mechanism and become more resistant to chemotherapy or accelerate the progression of metastasis [30][31][32].

More
© Text is available under the terms and conditions of the Creative Commons Attribution (CC BY) license (http://creativecommons.org/licenses/by/4.0/)
Upload a video for this entry
Information
Subjects: Oncology
Contributor MDPI registered users' name will be linked to their SciProfiles pages. To register with us, please refer to https://encyclopedia.pub/register :
Yilin Chiu
View Times: 48
Revisions: 3 times (View History)
Update Time: 29 Mar 2022
Table of Contents
1000/1000
Hot Most Recent