Submitted Successfully!
Thank you for your contribution! You can also upload a video entry related to this topic through the link below:
https://encyclopedia.pub/user/video_add?id=14051
Check Note
2000/2000
Curcumin as an Antimycobacterial Agent
Edit
Upload a video
This entry is adapted from 10.3390/biom11091278

Curcumin is the principal curcuminoid obtained from the plant Curcuma longa and has been extensively studied for its biological and chemical properties. Curcumin displays a vast range of pharmacological properties, including antimicrobial, anti-inflammatory, antioxidant, and antitumor activity. Specifically, curcumin has been linked to the improvement of the outcome of tuberculosis. There are many reviews on the pharmacological effects of curcumin; however, reviews of the antitubercular activity are comparatively scarcer.

Tuberculosis (TB), a communicable disease caused by the bacillus Mycobacterium tuberculosis (MTB), is one of the top ten causes of death worldwide. Currently, about a quarter of the world’s population is infected with MTB [1]. TB is a major international health problem and is a leading cause of death from a single infectious agent (ranking above HIV/AIDS).
The emergence of multidrug-resistant strains of Mycobacterium tuberculosis (MTB) and the adverse effects of antituberculosis drugs have renewed the interest in natural products for the discovery of new antitubercular leads [2]. The use of new techniques for evaluation of the antimycobacterial activity has led to the identification of many natural products that demonstrate potent inhibition of MTB and, in some cases, the mechanism of action has also been determined [3][4]. Natural products that have demonstrated inhibitory effects on the growth of MTB include secondary metabolites derived from plants, marine organisms, algae bacteria, and fungi and are categorized as terpenes, steroids, alkaloids, aromatics, polyketides, peptides, [5] and their synthetic derivatives [6]. One such natural product is curcumin, a plant-derived lipophilic polyphenol that has been demonstrated to possess therapeutic benefits in multiple diseases, including arthritis [7], cancers [8], inflammation [9], liver disease [10], metabolic syndrome [11], neurodegenerative diseases [12], and obesity [13]. Recent studies present curcumin and its derivatives as promising antitubercular drugs that could be used alone or in combination with other drugs. In this review, we discuss how curcumin and its derivatives affect TB.
Curcumin is also known as turmeric yellow or diferuloylmethane, a beta-diketone [14] that constitutes 2–5% of turmeric powder [15]. Turmeric is acquired from the rhizome of a tuberous herbaceous perennial plant, Curcuma longa L., a member of the Zingiberaceae family. The turmeric plant is native to the Indian subcontinent, and its use can be found abundantly in the traditional medical literature of India, Pakistan, Bangladesh, Bhutan, and China [16][17].
Pharmacological studies of curcumin suggest that it has a potent protective capacity against TB [15]. Therefore, the explanation of the hypothesis that curcumin and its derivatives have an antitubercular role is no longer in doubt. In this manuscript, we attempt to update the knowledge and review a short historical overview of the past eight year’s findings on the antitubercular activity of curcumin and its derivatives. The review summarizes and discusses the studies that provide evidence of the potential development of curcumin-based antitubercular drugs. Figure 1 depicts an overview of our review.

Figure 1. Scheme describing the overview of the review.

Although curcumin is a promising antimycobacterial agent, its use in clinical and pharmaceutical studies has been decelerated by its poor chemical stability [18][19]. In addition, curcumin has low oral bioavailability and is rapidly excreted due to its poor absorption and extensive intestinal and first-pass metabolism [20]. Therefore, efforts have been made to synthesize [21] and identify more stable analogues and potent antimycobacterial analogues. as listed in Table 1.
Table 1. Minimum inhibitory concentration of curcumin, demethoxycurcumin, and their respective synthetic analogues against various mycobacterial strains (μg/mL).
* IC50 of UBS-109 EF-24 against the mycobacterial strains; a INH, isoniazid; RIF, rifampicinn; STM, streptomycin; b EMB, ethambutol; c OFX, ofloxacin; CIP, ciprofloxacin; # MIC90.
Demethoxycurcumin, one of the curcuminoids, exhibited potent antimycobacterial activity against MTB H37Rv strain at 200 μg/mL. Synthetic derivatives yielded potent antimycobacterial agents, which exhibited a considerable activity with the MIC value of 7.8 μg/mL. Four derivates of demethoxycurcumin, DM4–DM7, were synthesized by chemical modification at its phenolic hydroxy positions. The derivative DM6 exhibited potent antitubercular with a MIC of 7.812 μg/mL. Derivative DM7 showed moderate activity with a MIC of 125 μg/mL, whereas the derivatives DM1, DM3, DM4, and DM5 were inactive against MTB even at the concentration of 250 μg/mL. The derivatives DM6 and DM7 possessed increased lipophilicity due to the presence of fatty acid ester chains at the phenolic hydroxy groups. The increased lipophilicity may have endowed the two derivatives DM6 and DM7 with better antitubercular activity due to the increased interaction with the lipophilic MTB cell wall causing impairment of transport of polar compounds through the outer lipid layer of mycobacteria. The lead optimization of these two derivatives may lead to the identification of antitubercular drug candidates in the future [23]. Figure 4 depicts the chemical structure of the derivatives of curcumin. 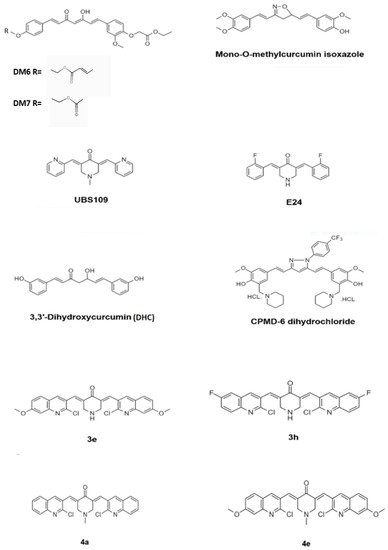 3. Identification of Curcumin Targets in Mycobacterium by Computer-Aided Drug Design

The systematic study of the targets and mechanisms of natural products through traditional assay-based methods is a time consuming and costly process because of the difficulty of extraction and activity testing. Virtual in silico screening is anticipated to be an alternative approach for low-cost and rapid analysis of natural products and efficient identification for their targets. Molecular docking is a potent virtual screening tool in rational drug design that could be utilized to investigate and identify ligands and the potential targets that could be extended to analyze the structural and molecular mechanics of the binding between the ligand and protein.
The structure-based drug design (SBDD) approach, a category of computer-aided drug design, has contributed to the introduction of lead compounds into clinical trials and to numerous drug approvals [28][29]. Molecular docking studies also revealed universal stress protein (USP), a novel therapeutic target of MTB, to be the target of curcumin. The docking of curcumin to the USP protein was done using AutoDock 4.2. Curcumin was shown to form a hydrogen bond ARG 136 (1.8 Å) and two ionic bonds with a carboxyl group of curcumin with LEU 130 (3.3 Å) and ASN 144 (3.4 Å) indicating possible new curcumin analogues for future therapy to downregulate USP [30]. The bottom-up systems biology approach revealed that aspartate-β-semialdehyde dehydrogenase (ASD), dihydrodipicolinate reductase and diaminopimelate decarboxylase are potential therapeutic targets of MTB infections. In silico molecular docking study using AutoDock 4.2.6 of these targets, which was prioritized based on flux and elementary mode analysis using direct mathematical modeling of the relevant metabolic pathways, identified curcumin as ASD inhibitors [31]. Computational models revealed that the synthetic derivative of curcumin, monoacetylcurcumin, binds to the specific BRCT domain of the essential enzyme MtuLigA for MTB. MtuLigA is unique to MTB, thus making it a promising drug target [32]. In vitro experiments to investigate the inhibitory activity of curcumin monoacetyl derivative against BRCT domain-containing DNA polymerase λ [33] proved to be nearly twice as effective (IC50 3.9) as curcumin (IC50 7.0 μM). These predicted targets are summarized in Table 2.
Table 2. Predicted targets of Curcumin and its analogues by computer-aided drug design.

More
© Text is available under the terms and conditions of the Creative Commons Attribution (CC BY) license (http://creativecommons.org/licenses/by/4.0/)
Upload a video for this entry
Information
Subjects: Biochemistry & Molecular Biology
Contributor MDPI registered users' name will be linked to their SciProfiles pages. To register with us, please refer to https://encyclopedia.pub/register :
Nilakshi Barua
View Times: 73
Revisions: 2 times (View History)
Update Time: 10 Sep 2021
Table of Contents
1000/1000
Hot Most Recent