Submitted Successfully!
Thank you for your contribution! You can also upload a video entry related to this topic through the link below:
https://encyclopedia.pub/user/video_add?id=14035
Check Note
2000/2000
Food's Effect for Endotoxemia
Edit
Upload a video
This entry is adapted from 10.3390/ijms22179562

Endotoxemia and hyperinflammation are important factors for determining the severity of infectious and non-infectious disease. The most important endotoxin is LPS, lipopolysaccharide, which is present at high concentrations in the intestine as part of the intestinal bacterial flora. The LPS from these bacteria can induce a chronic subclinical inflammatory process under certain circumstances.

Endotoxemia and hyperinflammation are important factors for determining the severity of infectious and non-infectious disease [1][2]. The most important endotoxin is LPS, lipopolysaccharide, which is present at high concentrations in the intestine as part of the intestinal bacterial flora. The LPS from these bacteria can induce a chronic subclinical inflammatory process under certain circumstances [2]. Normally, LPS stays within the intestinal lumen, but can reach the circulation in high concentrations following disruption of the intestinal barrier. This occurs during inflammatory diseases, like allergy and autoimmunity [3], and during chronic inflammatory bowel disease [4], the severity of the disease being correlated to the levels of endotoxemia and inflammatory markers. During type-1 diabetes and chronic fatigue syndrome, a disrupted intestinal barrier is likewise considered a source for the systemic immune activation characteristic for these diseases [5]. An altered intestinal bacterial flora, named dysbiosis, could modify the intestinal mucosa to become thinner and more permeable to pathogens with the establishment of low-grade inflammation [6].

The uptake of fat from the intestine and the levels of LPS and markers of inflammation were measured, both after breakfast and after lunch. The normal-weight men had a certain uptake of LPS in the blood independent of the uptake of dietary fat. The obese men demonstrated an uptake of LPS into the blood related to the amount of fat taken up from the intestine. The LPS concentrations in the blood remained elevated during the observation period of eight hours. The LPS levels were higher in obese men compared to normal-weight men, and were enriched in chylomicrons secreted from the intestine. The uptake of LPS therefore occurred trans-cellularly and not via any para-cellular transport, verified by measurement of zonulin, a molecule used for measuring intestinal permeability [11]. In another study, LPS levels were measured in both serum and the chylomicron fraction at baseline and 3 h after a fat overload meal containing 50 g fat in morbidly obese subjects [12]. Postprandially, serum and chylomicron LPS increased, and this increase positively correlated to postprandial triglyceride levels. These results support chylomicron-mediated transport of LPS, since subjects with the highest fold increase in triglyceride levels had higher levels of postprandial chylomicron LPS.

Obesity is a state of low-grade inflammation, where overconsumption of food initially triggers the adipose tissue to increase the size of fat cells in a healthy way [13]. However, continued overconsumption leads to an accumulation of very large fat cells and an increased release of inflammatory cytokines from both the enlarged fat cells and from the inflammatory cells residing in the adipose tissue [13]. In particular, visceral adipose tissue produces multiple pro-inflammatory cytokines, like TNFα, IL-6, and IL-8 [14]. Increased circulating levels of LPS in obese individuals could contribute to the inflammatory response in fat tissue via binding of LPS to TLR4 present in macrophages and fat cells [15]. Furthermore, increased concentrations of serum LBP, an LPS-binding protein (LBP), which forms a complex with LPS to enhance binding to CD14 and TLR4, were found in overweight and obese subjects [16].

Nutrients affect the intestinal barrier function in a long-term manner, not only during single meals. This occurs through their influence on the microbiota composition, which may either be healthy or more damaging for the intestine. The role of diet in affecting microbiota versus other factors has been estimated to be around 60%. The colon contains most bacteria, and the normal composition is Firmicutes , 64%, Bacteroidetes , 23%, followed by Actinobacteria and Proteobacteria [6]. A high amount of long-chain fatty acids, in particular saturated fatty acids in the intestine, results in reduced microbial diversity, and an increased abundance of Gram-negative bacteria, like Firmicutes [17]. With these bacteria, there is a large production of LPS, which could be absorbed by the presence of dietary fat in the intestine [18]. Not all fat is equally inflammatory, for example, olive oil is less harmful than butter [19]. The role of a high-fat diet in dysbiosis and disruption of the intestinal barrier has been documented earlier [20]. Eastern diets based on carbohydrates derived from plants, vegetables, rice, and fruits shape another microbiota. Eastern populations have a higher prevalence of Prevotella than Bacteroides compared to the Western population [18]. Simple carbohydrates and fiber are mostly associated with an increase of Prevotella , suggested as a health-promoting bacteria [21]. In contrast, diets with animal sources of protein and fat are associated with an increased number of Bacteroides , which are more prone to disease [18]. A diet rich in vegetables and fibers reduces intestinal pH and protects against the growth of pathogenic bacteria. Microbiota is therefore closely coupled to food quality by determining the luminal antigens exposed to the intestine. The impact of diet on the severity of an infectious disease has been described in a six-country study, where individuals following a plant-based diet with higher intake of vegetables, legumes, and nuts, and low intake of animal products, were reported to have a lower risk of developing moderate and severe disease compared to individuals that did not follow these diets [22]. A suggested mechanism is the ability of plant-rich food to cover the intestinal mucosa, hence restricting the inflammation induced by dietary fat and/or endotoxins, as illustrated in Figure 1 . 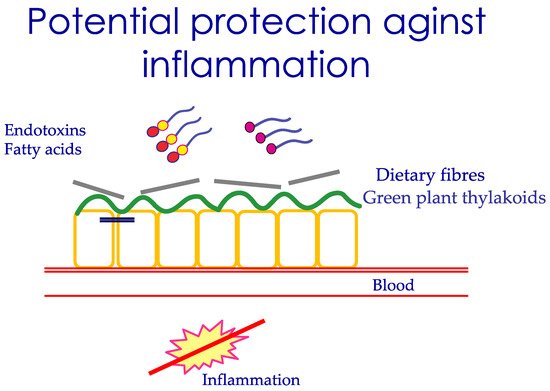 Figure 1. Schematic picture to demonstrate the ability of dietary fibers and green plant thylakoids to adhere to the intestinal mucosa, reducing the rate of uptake of fatty acids and potentially the uptake of endotoxins, leading to reduced inflammation.

In conclusion, food consumption may be important for endotoxemia and low-grade inflammation. This may occur through the meals eaten, and/or through the microbiota established. Diets with large amounts of saturated fat, animal products, and refined carbohydrate may induce endotoxemia more markedly than diets containing fiber-rich plant-based food. Whether this latter type of food pattern is relevant for suppressing inflammation during infectious disease is not known and awaits further studies.

More
© Text is available under the terms and conditions of the Creative Commons Attribution (CC BY) license (http://creativecommons.org/licenses/by/4.0/)
Upload a video for this entry
Information
Subjects: Gastroenterology & Hepatology
Contributor MDPI registered users' name will be linked to their SciProfiles pages. To register with us, please refer to https://encyclopedia.pub/register :
Charlotte Erlanson-Albertsson
View Times: 58
Revisions: 2 times (View History)
Update Time: 09 Sep 2021
Table of Contents
1000/1000
Hot Most Recent