Submitted Successfully!
Thank you for your contribution! You can also upload a video entry related to this topic through the link below:
https://encyclopedia.pub/user/video_add?id=13992
Check Note
2000/2000
IoT Privacy Preservation Using Blockchain
Edit
Upload a video
This entry is adapted from 10.3390/electronics10141732

IoT uses a large number of devices and most of these devices are resource-constrained. Blockchain being light-weighted is a great solution for privacy preservation in resource-constrained devices. The privacy aspect of blockchain comes from its ability to provide transparency in a distributed network.

IoT ’s privacy and security with interconnected devices causes security challenges in the area of network computing. It means at any moment from anywhere, an attack can be launched on these devices that includes threats like denial of service, fabrication of identity, physical threats, communication channel targeting and many more. One of the biggest challenges in this research field is consumption of power resources and computational overheads on IoT devices. Many solutions have been proposed by the researchers in which strategies based on blockchain, homomorphic encryption, and attribute-based encryption are provided.

The exchange of data among physically connected devices related to their infrastructure and behaviors in the form of groups is known as IoT. From the Gartner report shown in Table 1 , it was expected that almost 5.8 Billion interconnected devices would be having a vast share in market of $3 trillion in 2020 [1], while the forecasts of international data co-operation report that the expected market value of IoT devices is $1.1 trillion for 2023—the market of full stack systems, like RIOT [2] and Contiki [3] that enabled IoT devices functionality, is also expected to expand.

One of the most important features of blockchain is decentralization. It is also used as a consensus mechanism to enable trust between all parties involved in decentralized networks, one example is cryptocurrency—for example, Bitcoin and Ethereum. IoT devices are decentralized and hence can be benefited by the blockchain.

Table 2. Types of blockchain and their properties.

Figure 1 shows some applications of blockchain in different fields, including IoT, healthcare, finance, agriculture and cryptocurrency. 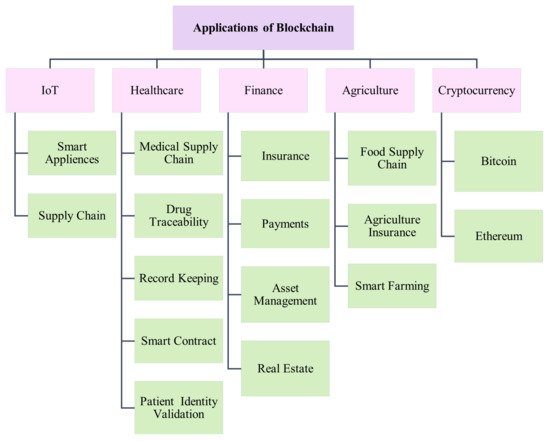 Although it is infeasible to discuss all applications, we describe some of the most important applications of blockchain in the following subsections.

3. Integration of Blockchain and IoT

A blockchain-based architecture for IoT privacy preservation is proposed by Rahulamathavan et al. [7], in which an attribute-based encryption has been used with Testbed platform to achieve data privacy and confidentiality, but there is a slight time increase due to involvement of multiple attribute authorities and using PoW consensus mechanism.

As IoT consists of billions of devices accross the world, it poses serious threats to the privacy of the users. Other than providing decentralization, consensus and smart contracts for IoT, blockchain is being used at a large scale to assure privacy preservation in IoT. Table 3 presents a summary of recent researches based on the scheme utilizing blockchain for privacy preservation in IoT.

In order to provide security and privacy, integration of the Tangle in IoT can be very useful. Tangle is a data structure that IOTA is based on. It utilizes a directed acyclic graph and utilizes less energy as compared to a blockchain network. IOTA is light-weighted and quantum resistant. Another important advantage is that IOTA does not need miners. The network participants issue new transactions without having to involve another node that has better computing resources. Having no miners makes IOTA fee-less.

Strong privacy preservation is still a challenge when using blockchain. For example, in order to resist Sybil attack, a certain amount of honest participants are required in decentralized mixing protocol. Hawk reinitializes and creates a different trusted process for every smart contract, so privacy preservation having few trust assumptions needs to be enhanced.

A single security solution for all blockchain-based IoT devices cannot fulfill security requirement due to resources-constrained nature of devices. The designs of such kinds of frameworks are required to provide dynamic and adaptable security. Implementation of other privacy preserving solutions, such as data anonymization and differential privacy along with blockchain, can provide better privacy. A framework is needed that can preserve privacy using both the techniques, keeping resource-constrained nature of IoT devices in mind.