Submitted Successfully!
Thank you for your contribution! You can also upload a video entry related to this topic through the link below:
https://encyclopedia.pub/user/video_add?id=1389
Check Note
2000/2000
Chemical Changes in Atherosclerosis
Edit

Fiberoptic Raman spectroscopy and Raman microscopy were used to investigate alterations in the aorta wall and the surrounding perivascular adipose tissue (PVAT) in the murine model of atherosclerosis (Apoe-/-/Ldlr-/- mice). Both abdominal and thoracic parts of the aorta were studied to account for the heterogenic chemical composition of aorta and its localization-dependent response in progression of atherosclerosis. The average Raman spectra obtained for both parts of aorta cross sections revealed that the chemical composition of intima-media layers along aorta remains relatively homogeneous while the lipid content in the adventitia layer markedly increases with decreasing distance to PVAT. Moreover, our results demonstrate that the increase of the lipid to protein ratio in the aorta wall correlates directly with the increased unsaturation level of lipids in PVAT and these changes occur only in the abdominal, but not in thoracic, aorta. In summary, distinct pathophysiological response in the aortic vascular wall could be uncovered by ﬁber optic Raman spectroscopy based on simple parameters detecting chemical contents of lipids in PVAT.

The concept of presented study was to investigate the chemical alterations and localization-dependent response in aorta wall and perivascular adipose tissue upon atherosclerosis development. For this purpose unbiased techniques fiber optic Raman spectroscopy and Raman microscopy were used. We have conﬁrmed heterogeneity of the chemical composition of murine aorta vessel wall and aortic PVAT and demonstrated resistance of thoracic but not abdominal aorta wall and surrounding PVAT to atherosclerosis-induced changes in lipids proﬁle. Those findings may be important in the context of future diagnostics and to target therapeutic strategies.

Atherosclerosis is a main vascular pathology being an origin, among others, of coronary artery disease and stroke underlying primary causes of death worldwide[1]. Atherosclerosis is a progressive chronic metabolic disorder characterized by accumulation of lipids, inflammation, and endothelial dysfunction leading to fibrosis and plaque formation within arteries[2]. The condition of the cardiovascular system is regulated by the endothelium, the monolayer of highly-specialized cells lining the blood and lymphatic vessels, which triggers atherosclerosis and other lifestyle diseases when dysfunctional[3][4]. In general, all blood vessels in the circulation, except for cerebral arteries and microvessels[5], are surrounded or embedded in perivascular adipose tissue (PVAT). The key risk factors of atherosclerosis, i.e., obesity[6][7][8][9][10] and hypercholesterolemia (independently to obesity)[11][12][13] result in PVAT inflammation. Due to direct location of PVAT in close vicinity to adventitia, facilitating the flow of adipokines, chemokines, and cytokines[9][14][15][16], inflammation in PVAT undergoes a different mechanism compared to observed in the visceral fat[17] and may easily propagate to the inner layers of the vessel wall triggering dysfunction of the smooth muscle cells and endothelium that give momentum to atherosclerosis development[18]. The apparent influence of PVAT on the vessel wall and direct cross-talk between these tissues[11][12][19] demonstrate that PVAT is a new target of yet unexplored therapeutic potential. Here, we have used fiber optic Raman spectroscopy to investigate the effects of chemical alterations in the vessel wall and PVAT due to atherosclerosis in mice (Apoe-/-/Ldlr-/- mice).

3.1. Media Layer in Abdominal, but not Thoracic, Aorta Display Alterations in Lipid Content in Apoe-/-/Ldlr-/- Mice

To define the chemical changes due to the progression of the atherosclerosis, fiber optic Raman spectroscopy was applied for point by point measurement of the vessel wall along the long axis from the endothelial side (the en face aorta). The Raman spectra in the high-wavenumber range averaged over 5 animals (24 spectra per animal) of the thoracic (denoted green) and abdominal (denoted violet) parts of the aorta wall are presented in Figure 1 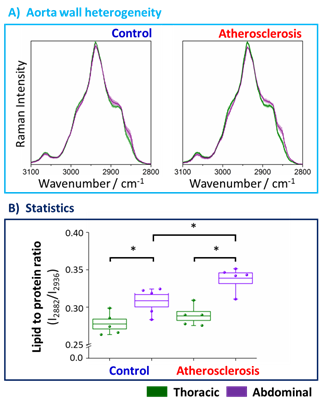 Figure 1. Averaged Raman spectra and the statistical analysis of the lipid to protein ratio of the thoracic and abdominal fragments of the aorta wall upon atherosclerosis development. Averaged Raman spectra of the thoracic (green) and abdominal (violet) aorta wall obtained from the control group (blue) and animals with developed atherosclerosis (red) (A). Spectra were normalized and presented with the standard deviation on each data point (accordingly lighter color). The analysis of the lipid to protein ratio (B) was calculated using the integral intensities of bands at positions 2882 and 2936 cm−1. Values were shown in the box plots: mean (horizontal line), SEM (box), minimal and maximal values (whiskers). The level of statistical significance: * p <0.05.

Values of integral intensities of bands at 2882 and 2936 cm−1, assigned mostly to lipids and proteins, respectively, were used in the statistical analysis as the markers of the chemical composition of the tissue. Standard deviations of the spectra between animals from the same group are relatively small which reflect small spectral intravariability per group. However, differences between spectra per animal are relatively high (Figure S2, Supplementary Materials), therefore we averaged several (24) spectra per animal. Figure 1A shows the comparison of Raman signatures of the averaged thoracic and abdominal fragments of the aorta wall indicating clearly that the chemical composition of the thoracic and abdominal aorta both for the control group and, particularly for the mice with developed atherosclerosis, is different. The effect of atherosclerosis on the chemical composition of thoracic and abdominal aortic wall was studied. Obviously, there is no obvious change in Raman characteristics, so the composition of TA has no obvious change. Compared with the thoracic aorta, the lipoprotein ratio of abdominal aorta was significantly larger, showing a significant heterogeneity of aortic composition. The abdominal aortic wall contained more lipids than the thoracic aorta (Fig. 1A). Compared with the control group (11.6%), the effect of atherosclerosis in subjects (17.7%) was more prominent. In addition, the lipoprotein ratio of abdominal wall (not chest wall) of aorta wall changed significantly (9.7%), indicating that disease progression affects AA, while TA is resistant to changes in lipid content caused by atherosclerosis, even in the late stage of atherosclerosis (22 weeks). The increase in abdominal fat content is also reflected in the fingerprint spectral region, where cholesterol induced signals at 704 cm−1 are clearly visible in the atherosclerotic group (Fig. S1B, supplementary information). Therefore, the accumulation of lipids (cholesterol, etc.) occurs in the abdomen of the aorta, but this effect is not observed in the thoracic segment that appears to be resistant to lipid accumulation (even at the late stage of atherosclerosis progression), as shown by fiber Raman spectroscopy.

In order to investigate the impact of atherosclerosis on perivascular adipose tissue, in particular TA and AA parts of PVAT, the averaged Raman spectra (5 animals in each group, at least 7 spectra per animal) of TA and AA PVAT were analyzed (Figure 2). Additionally, the white adipose tissue surrounding epididymis (eWAT) was studied for comparison. 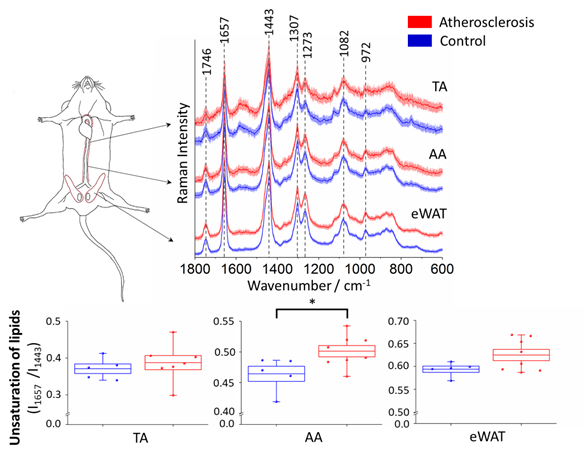 Figure 2. Averaged Raman spectra of the thoracic and abdominal PVAT and epididymal adipose tissue and statistical analysis of unsaturation of lipids. Averaged Raman spectra (A) in the fingerprint region of the thoracic (TA) and abdominal (AA) PVAT and the epididymal adipose tissue (eWAT) for the control group (blue) and animal with developed atherosclerosis (red) presented with the standard deviation on each data point. The analysis of the lipid unsaturation level (B) calculated as the ratio of integral intensities of bands at 1657 and 1443 cm−1. Values were shown in box plots: mean (horizontal line), SEM (box), minimal and maximal values (whiskers). The level of statistical significance: * p <0.05.

The collected Raman spectra of PVAT exhibit homogeneity and an increased signal to noise ratio observed for the spectrum of the thoracic aorta may be due to a quite high content of hemoproteins in its mitochondria-rich ‘BAT-alike’ structure. The presence of hemoproteins is revealed by characteristic bands at 1585, 1131, and 751 cm−1 and the increased fluorescence background (532 nm excitation was used)[20][21]. As it was previously reported[22], the averaged Raman spectra of the adipose tissue reflect the typical profile of unsaturated triacylglycerols[23] that are main components in the adipose tissue (Figure 2A). Additionally, in line with our previous study[21], the unsaturation level of the adipose tissue for the control group follows the order eWAT > AA > TA. A semi-quantitative estimation of the ratio of 1657 and 1443 cm−1 bands, reflecting the lipid unsaturation degree[21][21], is shown in Figure 2B. The results exhibit that the change of the lipid unsaturation ratio is the most prominent (and statistically significant) for the abdominal PVAT (8.0%). For eWAT, a slight (5.2% and statistically insignificant) increase in the lipid unsaturation is observed, whilst for the thoracic PVAT there is practically no change in this parameter. Therefore, although the basal level of lipid unsaturation is lower in the abdominal PVAT than in eWAT, the phenotype of the abdominal PVAT (reflected in this case in lipid unsaturation) converts readily into WAT-like phenotype, i.e., considerable whitening of the abdominal (but not thoracic) PVAT occurs due to atherosclerosis progression. A direct comparison between atherosclerosis-induced alterations in the inner layers (intima and media) and surrounding PVAT is made below.

3.3. Alterations in PVAT and Vessel Wall Coexist in Abdominal Aorta in Apoe-/-/Ldlr-/- Mice

Overall, the impact of atherosclerosis both on the aorta wall and surrounding PVAT is significantly manifested only in the abdominal part of the aorta (Figure 3). Contrarily, the thoracic part of the aorta and PVAT is resistant to atherosclerosis-induced changes in lipid content, as shown by lack of chemical changes in the Raman spectra of these tissues. WAT-like (i.e., more prone to inflammation, antiatherogenic) and BAT-like (i.e., resistant to inflammation, proatherogenic) phenotypes of the adipose and thoracic parts of PVAT[18], respectively, are reflected in the different basal levels of lipid unsaturation in these tissues. The increase of the unsaturated lipid content is associated with increased lipid acid desaturase activity and indicates inflammation as shown previously studying non-alcoholic fatty liver disease progression. Analogically, the augmented level of the lipid unsaturation ratio is a hallmark of inflammation in endothelial cells.

Strikingly, the increase of the unsaturation level of lipids in PVAT correlates directly with the increase of the lipid-to-protein ratio in the aorta wall, comparing both the basal levels and changes in the respective values (Figure 3). It was demonstrated previously on big cohorts of patients with atherosclerosis and diabetes that although adiponectin serum levels in these pathologies are inversely correlated with the vascular NADHP oxidase activity and superoxide •O2− levels, PVAT responses to the increased NADHP oxidase activity in underlying vessels via upregulation of adiponectin gene expression[19]. Vascular upregulation of PVAT adiponectin clearly demonstrates the existence of a direct cross-talk between the vascular arterial wall and the surrounding PVAT[19]. 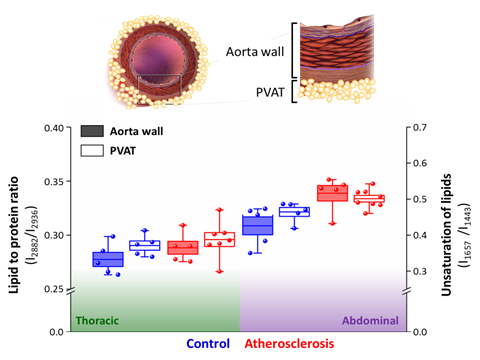 Figure 3. Correlation of atherosclerosis-induced alterations in the aorta wall and surrounding PVAT. The comparison of the lipid to protein ratio of the aorta wall tissue and unsaturation of lipids of PVAT were calculated using the ratio of integral intensities of bands at 2882–2936 cm−1 and 1657–1443 cm−1, respectively. Values were shown in box plots: mean (horizontal line), SEM (box), minimal and maximal values (whiskers). Significance of pairwise analysis are presented in Figures 3 and 4.

Apparently, these interactions between the vessel wall and the surrounding PVAT[19] are reflected also in considerable and consistent changes in the chemical composition of the intima/media layer and PVAT, which may be important in the context of future diagnostic and therapeutic strategies.