Submitted Successfully!
Thank you for your contribution! You can also upload a video entry related to this topic through the link below:
https://encyclopedia.pub/user/video_add?id=13810
Check Note
2000/2000
MSC Senescence
Edit
Upload a video
This entry is adapted from 10.3390/ijms22157945

Mesenchymal stromal cells (MSCs) are a heterogeneous population of stromal cells capable of self-renewal and multi-lineage differentiation into various tissues of mesodermal origin.

Mesenchymal stromal cells (MSCs) are a heterogeneous population of stromal cells capable of self-renewal and multi-lineage differentiation into various tissues of mesodermal origin [1]. Although MSCs were originally isolated from bone marrow [2], recent research has identified alternative sources, including adipose tissue [3], dental pulp [4], the endometrium [5], peripheral blood [6], the periodontal ligament [7], the placenta [8], the synovial membrane [9], and umbilical cord blood [10]. Evidence has suggested that MSCs can be found in all vascularized tissues of the body [11]. MSCs have a high proliferative potential, multipotency, immunomodulatory activity, and paracrine effect [12][13][14]. These features, as well as the lack of ethical concerns that surround embryonic stem cells, make MSCs a promising material for cell therapy, regenerative medicine, immune modulation, and tissue engineering [15]. In the last decade, they have been increasingly used in clinical practice to treat numerous traumatic and degenerative disorders [16].
Although there is no consensus on a single surface molecule to identify MSCs, the International Society for Cellular Therapy (ISCT) proposed a minimum of three criteria that need to be satisfied for a cell to be considered an MSC [17]: (a) adherence to plastic under standard culture conditions; (b) expression of CD73, CD90, and CD105, and lack of expression of CD11b or CD14, CD34, CD45, CD19 or CD79a, and HLA-DR; (c) differentiation into adipocytes, chondrocytes, and osteoblasts in vitro. Other surface markers generally expressed by MSCs include CD10, CD13, CD29, and CD44 [18][19].
Although MSCs are present in several tissues, their numbers are low within the aspirate. Thus, to be clinically useful, MSCs need to be expanded in vitro over several population doublings (PDs) to obtain enough cells before implantation. The chronological age of a donor strongly influences the quality and lifespan of MSCs [20][21]; MSCs from aged donors perform less well than their younger counterparts because of their reduced proliferative capacity and differentiation potential [22]. Additionally, their regenerative potential declines after 30 years of age [23]. This is further supported by the observation that human umbilical cord MSCs, being neonatal in origin, can grow up to passage 10 without losing multipotential capacity [24], and exhibit enhanced expression of telomerase and pluripotency factors compared to adult bone marrow-derived MSCs [25].
While in vivo ageing refers to the chronological age of the donor, which affects the lifespan of MSCs, in vitro ageing is the loss of MSC characteristics as they acquire a senescent phenotype during expansion in culture. Irrespective of donor age, during in vitro expansion, the proliferation rate progressively decreases until growth arrests [26][27][28][29]. This was first proposed by Hayflick in 1965, who suggested that all primary cells cease to proliferate after a certain number of cell divisions in a process known as cellular senescence [30]. Senescence negatively affects the differentiation capacities of MSCs, resulting in reduced efficacy following transplantation [31]. Several biological markers have been proposed to drive senescence. These include p16, p21, p53, and nuclear factor kappa B (NF-κB) [32][33]. They take part in several biochemical pathways of the cell cycle. Other markers, such as superoxide dismutase (SOD), are found to inhibit the cell from reaching that state [34]. The levels of the aforementioned markers differ as the MSCs undergo chronological ageing.

While in vivo ageing refers to the chronological age of the donor, in vitro ageing is the loss of MSC characteristics as they acquire a senescent phenotype during in vitro expansion. For MSCs to be clinically effective in an ageing population, it would be of great significance to monitor senescence and understand the molecular basis of chronological ageing.
The diverse nature of MSCs poses a great challenge to forming a precise characterisation profile [35]. The minimal criteria to define MSCs, as proposed by the International Society for Cellular Therapy (ISCT) [17], were an important step towards the standardisation of MSC models. However, it is yet unclear whether these criteria are accurate, essential, and comprehensive. Several of the studies included in this review described an MSC population that included some, but not all, of the minimal criteria [32][33][34][36][37][38][39][40]. The heterogeneity between MSC populations in different studies prevents the accurate comparison of outcomes. This poses a particular challenge to the advancement of the field. A potential solution would be to rely on functional assays, as well as surface marker characterisation, to accurately define an MSC population. This could involve differentiation potentials [17] and immunological characterisation [41].

Senescence is a concept with an elusive definition. Broadly, it describes cellular deterioration due to ageing, and a subsequent loss of growth and proliferative capacity. Senescence is a well-documented outcome in cellular populations that undergo genotoxic stress [42]. This is reflected in a cell’s absence of proliferation, the expression of senescence markers, and the secretion of a senescence-associated secretory phenotype (SASP). It is an irreversible state that protects a cell from the consequences of compromised genomic integrity [43]. However, there is no single phenotypic definition to describe the process of senescence, but rather a collection of phenotypes. Specifically, hallmarks of cellular senescence include an arrest of the cell cycle, resistance to apoptosis, SA-β-gal expression, and a SASP that is associated with growth-related oncogene (GRO), IL-8, IL-12, and macrophage-derived chemokine (MDC) [44]. The driving cause of senescence with ageing appears to be telomere dysfunction, as well as associated genetic and epigenetic changes, perceived as DNA damage and activating the persistent DNA damage response (pDDR) mechanism [45][46]. Human MSCs have been described as exhibiting a marked resistance to apoptosis and to default to a senescence phenotype in response to injury [31]. When exposed to ionising radiation, p53 and p21 were seen to drive MSC cycle arrest and p16 and RB to drive senescence [47]. Similar markers were explored by some of the studies included in this review, with SA-β-gal, inflammatory markers, and pDDR proteins being most frequently referenced [32][33][34][36][39]. A reduction in the rates of proliferation, as well as an increase in the senescence phenotype was observed in similar experiments that evaluate the effects of in vitro ageing on MSCs [48].

When assessing the effects of chronological age on MSC senescence it is essential to evaluate evidence for cell cycle arrest and against proliferation. In the included studies, p21 and p53 were seen to be significantly upregulated in six studies [32][34][49][36][39][40], providing strong evidence for cell cycle arrest, as both molecules are central components of the response pathway to DNA damage [50]. In addition, upregulation of p16 [32][36][39], ATM [36], CHK1 [36], E2F4 [36], and RB [36] (illustrated in Figure 1, below) was also noted in MSC samples from older donors, highlighting the persistent activation of the DNA damage response pathway [51]. Although the upregulation of all mentioned markers was rarely seen in a single study, the six studies mentioned the upregulation of at least one marker, with the remaining three not mentioning whether they looked for a change in their expression. Furthermore, highlighting the effects of an activated pDDR in cells from older donors, a decrease in the expression of proliferative markers like Ki67, MAPK pathway (illustrated in Figure 1, below) elements, and Wnt/β-catenin pathway elements was seen in two studies [33][49]. It is unclear, however, whether the absence of proliferation was associated with an increase in the rate of apoptosis. It is known that MSCs exhibit resistance to apoptosis [17], and so do most senescent cells, but the evidence in the literature was contradicting. Specifically, both mention that an increase in the rate of apoptosis [34] and a decrease in the expression of caspases 3/8/9 [36] was seen in two different studies. Two studies reported an increase in the expression of SA-β-galactosidase, supporting the association between senescence and chronological age [32][40]. 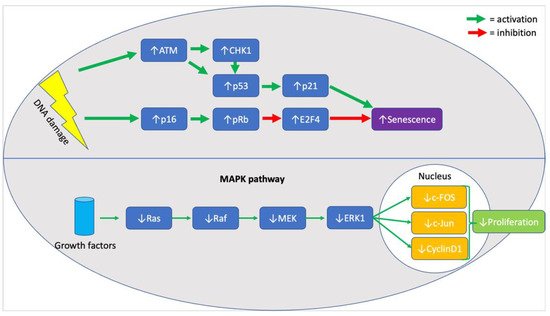 Figure 1. Summary of molecular markers implicated in the senescence phenotype of aged MSCs.

The systematic approach to constructing a research question yielded a thorough review of the literature to identify all relevant studies. The ability to make effective comparisons between the studies was, however, limited by the heterogeneity of the included studies in defining the MSC population; not all studies followed the minimal defining criteria proposed by ISCT to define their cell population. There was a large variation in the markers explored by the different studies with most studies not investigating the effect of chronological age on the SASP or the differentiation potential of MSC, both defined hallmarks of senescence [44]. The included genetic studies offered a descriptive assessment of genes that were up- and downregulated without any implications on how these genes affect senescence pathways. Further work is needed to identify the relevant pathways through which chronological age influences senescence in MSCs.

More
© Text is available under the terms and conditions of the Creative Commons Attribution (CC BY) license (http://creativecommons.org/licenses/by/4.0/)
Upload a video for this entry
Information
Subjects: Biochemistry & Molecular Biology
Contributor MDPI registered users' name will be linked to their SciProfiles pages. To register with us, please refer to https://encyclopedia.pub/register :
Konstantinos Kapetanos
View Times: 34
Revisions: 2 times (View History)
Update Time: 02 Sep 2021
Table of Contents
1000/1000
Hot Most Recent