Submitted Successfully!
Thank you for your contribution! You can also upload a video entry related to this topic through the link below:
https://encyclopedia.pub/user/video_add?id=13768
Check Note
Tak-Wah Wong 2021-09-11 13:30:33
This well-written review is concise and adds new information to the related research area.
2000/2000
Aberrant Expression of Immunohistochemical Markers
Edit
Upload a video
This entry is adapted from 10.3390/dermatopathology8030040

The gold standard for melanoma diagnosis is histological examination with hematoxylin and eosin (H & E). However, malignant melanoma can exhibit varied morphologic features that make definitive diagnosis challenging, as it can be mistaken for other neoplasms. Immunohistochemical stains may be employed to aid in diagnosis, especially when the differentiation of the neoplasm is unclear or when the lesion is partially sampled. Nevertheless, rare cases of malignant melanoma can present with unusual staining patterns. This includes aberrant expression of non-melanocytic markers and/or lack of expression of the commonly used melanocytic markers.

The immunophenotypic profile may evolve during the course of malignant melanoma, most commonly manifesting in the loss of conventional melanocytic marker expression in metastatic lesions [1]. In fact, 1% of metastatic melanoma specimens are negative for S100. No association was found between S100 negativity and the histologic subtype or site of metastasis. [1].

It is well known that desmoplastic melanoma often stains negative for specific melanocytic markers such as Tyrosinase, HMB-45, and Melan A ( Figure 1 and Figure 2 ). S100 protein is the primary immunohistochemical stain used, with a sensitivity approaching 90% [2][3]. However, cases with focal or absent S100 staining have been reported, rendering the diagnosis of melanoma more challenging [4]. One case report of SOX10 negative desmoplastic melanoma has also been reported [5]. 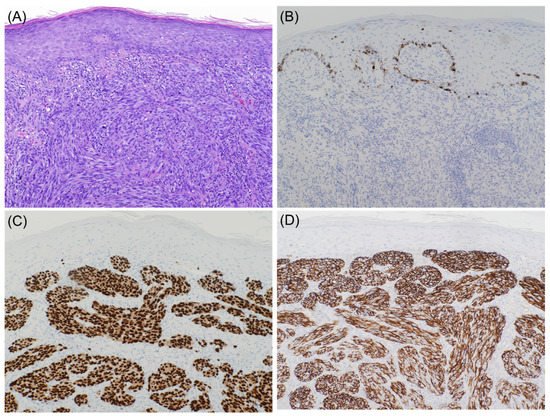 An unusual case of primary melanoma with loss of staining for S100 protein, HMB-45, and Melan A, but expressed tyrosinase was also reported. Although tyrosinase is reported to be less sensitive than S100 protein, it is one of the most specific immunostains that may prove useful when the diagnosis of malignant melanoma is in doubt [6].

Another case primary melanoma on the back of a 58-year-old man was reported, in which the central portion of the tumor had lost expression of common melanocytic markers and expressed aberrant epithelial markers including pancytokeratin and CMA 5.2 [7].

The aberrant expression of desmin in melanoma is reported in many case reports. One study also found desmin expression in 24% of cases, although it might represent a referral bias from consultation cases [18].

The expression of epithelial markers such as CAM 5.2, cytokeratin AE1/AE3, and OSCAR antibody is not uncommon in melanoma, especially in cases with epithelioid cytomorphology [27,30,31].

In conclusion, malignant melanoma showing aberrant expression of immunohistochemical markers may easily be mistaken for carcinomas, lymphomas, sarcomas, and neuroendocrine tumors. Awareness by pathologists of these potential pitfalls, and appropriate use and interpretation of broad immunohistochemical markers together with the clinical history, should facilitate the diagnosis of malignant melanoma with unusual staining patterns.

More
© Text is available under the terms and conditions of the Creative Commons Attribution (CC BY) license (http://creativecommons.org/licenses/by/4.0/)
Upload a video for this entry
Information
Subjects: Dermatology
Contributor MDPI registered users' name will be linked to their SciProfiles pages. To register with us, please refer to https://encyclopedia.pub/register :
Elie Saliba
View Times: 81
Revisions: 3 times (View History)
Update Time: 24 Nov 2021
Table of Contents
1000/1000
Hot Most Recent