Submitted Successfully!
Thank you for your contribution! You can also upload a video entry related to this topic through the link below:
https://encyclopedia.pub/user/video_add?id=13700
Check Note
2000/2000
Nature-Based Solutions in Urban Landscapes
Edit
Upload a video
This entry is adapted from 10.3390/resources10080081

Urban landscapes are under great pressure and particularly vulnerable, due to climate change, population growth and economic development. Despite the growing understanding that Nature-Based Solutions (NBS) represent efficient solutions to facilitate adaptation to climate change and increase cities’ resilience, their wide-scale adoption is still limited. There is a need to include NBS in urban governance and planning agendas through policy instruments, such as plan/legislative, economic and information instruments. However, there is a lack of studies that assess such policy instruments and, through the use of specific examples, how they can foster NBS adoption.

Urban landscapes are under great pressure and particularly vulnerable, due to climate change, population growth, economic development and infrastructure characteristics [1]. Urban areas and consumption patterns are increasing worldwide. It is forecasted that, by 2050, 70% of the world’s population will be living in cities and gross domestic production is expected to suffer an annual decline of up to almost 80% due to the climate risk [2][3][4][5]. It is becoming increasingly clear that modern urbanization patterns are entwined with socio-ecological trends. These growing pressures in urban centers highlight the need for more sustainable planning and governance, namely in relation to heat waves, water and air pollution, flooding and erosion, droughts, human health degradation and biodiversity loss [6][7][8]. Hence, cities need to become more resilient in order to adapt to and mitigate climate change impacts. For this reason, new solutions and approaches are needed.

The NBS concept is related to and integrates other concepts, such as Ecosystem Services, Green and Blue Infrastructure Ecological Engineering, and Ecosystem-based adaptation [9][12][14][15][16]. Despite being somewhat complementary, there are differences between these concepts, as NBS covers parts of the other concepts but not necessarily everything they represent [9][17]. The differentiation of NBS is grounded in the integration of societal challenges, human well-being and biodiversity benefits that are less evident in the other concepts, as NBS have a broader scope while integrating several issues simultaneously [8]. In fact, NBS are not supposed to replace other concepts, but are intended instead to support and build upon them [18].

Policies can reflect the current reality at a certain time and place, and interactions between different policies affect the resulting policy implementation outcome [22]. Policies range from global (macroscale) to local (microscale), including initiatives such as EU directives, national and regional adaptation plans and strategies, and local governance arrangements [13][23]. The policy cycle should entail the agenda setting, impact analysis, policy formulation, policy implementation and policy evaluation. This is in order to ensure that the problem and objective is identified, alternatives are considered, potential negative and positive impacts are considered, and the policy is designed, implemented and evaluated [24]. For NBS, specifically, it is recommended that the policy cycle also entails stakeholder engagement and benefits communication [25].

There are different barriers and enablers to NBS implementation. Governance and local policies steer their adoption and can either hinder or potentiate them. Bureaucracy, lack of financing models, private land ownership, lack of social acceptance, lack of knowledge, technical levels and benefits awareness, lack of cooperation between sectors, perceived costs, social inequalities, institutional fragmentation and inadequate regulations are regarded as the main barriers to NBS implementation [18][26][27][28]. Contrarily, recognized enablers include easy access to policies, good communication, stakeholder engagement, supportive regulations, inclusion of NBS in plans, guidelines and strategies, pilot projects, awareness marketing, involvement of different institutions, financial incentives, as well as monitoring and evaluation actions [18][29][27]. In fact, policy drivers, such as financial incentives, collaboration and communication are acknowledged as major NBS enablers [26][29].

Regulations supporting NBS adoption are diffuse and, generally, more technical than policy-oriented [30][31]. To put NBS on governance agendas, policy instruments related to specific frameworks and goals are acknowledged as key-catalyzers. In fact, the success of NBS adoption relies, to a large extent, on their integration in urban planning and policies [26][30][31][32] (see Figure 1). Hence, policy instruments are governance tools that have the potential to influence NBS adoption [27]. 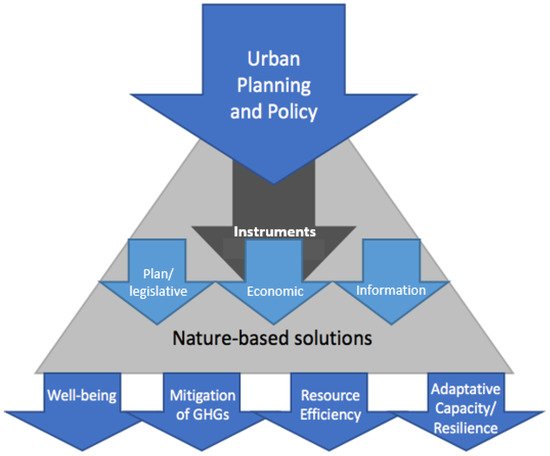 Figure 1. Conceptual framework for the articulation between urban planning, policy instruments and NBS (adapted from [4]).
Most of the NBS literature focuses not on policy instruments, but on NBS impacts and potentialities [26][30]. Despite being essential to demonstrate their benefits and co-benefits in order to get or keep NBS on political agendas and in decision-making processes, there is also a need to assess the role of policy instruments in encouraging the adoption of NBS [33][34]. Furthermore, local planning practices, real-world applications, concrete planning, implementation barriers and challenges are pinpointed as gaps in the literature [5][35][34][36]. In fact, most authors focus on barriers to the implementation of NBS, revealing the importance of policy instruments to increase their success [20][36][37], and provide implementation strategies and suggestions [2][13][20][38][39].
Despite the fact that several studies exist regarding NBS policy instruments, most of this literature either focusses on general governance or superficially studies the existence of policy instruments that support NBS implementation, barriers and enablers—thereby not assessing their effectiveness or providing specific examples [26][30]. Hence, studies that integrate policy instruments and NBS are still scarce, which is in line with Albert et al. [40] findings which show that the NBS concept only recently began to be integrated in environmental policy.
Therefore, although NBS are increasingly being contemplated and integrated into policy-making and planning guidelines, integration of policy instruments is needed for the success of NBS [15][30][34]. Hence, further research on NBS and associated planning policies and instruments is needed, in order to ensure their implementation and upscaling [13][30]. However, governments and the scientific community struggle with the challenge of shifting from general announcements to practical applications, which might be facilitated by policy instruments [41][35].

2. Policy Instruments to Encourage the Adoption of Nature-Based Solutions in Urban Landscapes

The use of policy instruments to promote the adoption of NBS is pinpointed by all reviewed papers. Nevertheless, many of these papers also add that several constraints need to be addressed when promoting the adoption of NBS in cities. In fact, the lack of knowledge on how to integrate environmental matters into urban policy is a major concern [40][28]. Furthermore, there are several government-related barriers, such as external pressures, unsupportive governance, national and local regulations, lack of political will and the existence of conflicts of interest [1][26][36][37]. The general lack of knowledge, lack of cooperation, poor communication, stakeholder engagement and scientific uncertainty together with the fact that scientists, decision-makers and citizens usually speak different “languages”, is hampering NBS implementation [2][28][42]. In addition, funding and cost problems, land useownership issues and lack of space are also highlighted as significant issues [37][42][43]. According to Connop et al. [44], real applicability and scaling-up are hindered by all these barriers. To overcome them, it is important to synthetize case-specific drivers and constraints before implementation [13]. In fact, the acknowledgement of barriers feeds the need for effective instruments to achieve a policy-mix to adopt NBS, especially as the advantages are considered to outweigh the constraints [13]. There are few, albeit a growing number of, studies regarding NBS (mostly focused on biophysical impacts or general governance, barriers and enablers) as well as NBS policies (mostly focused on the political perspective). Hence, the integration of these two concepts still represents a gap in literature.

The vast majority of reviewed papers presented conceptual approaches (almost 71%), followed by stakeholder engagement (almost 22%) and model-based methodologies (statistical and simulation, comprising 8% of the studies). This highlights the fact that this concept is seldomly applied and mostly conceptual, evidencing the lack of real applicability assessments [44]. As for the case studies used, most of them are, once again, theoretical in the sense that they do not provide an empirical study (almost 30%).

The plan/legislative instruments were mentioned the most frequently (in almost 90% of the papers), which was expected as these comprise the first step in integrating a concept in the decision-making processes while noting the novelty of the NBS concept [8]. A complete understanding of the concept is thus necessary, as well as concrete planning and discourse integration [13][35]. Moreover, guidelines and norms reflect the national view and perspective on the matter, meaning that this step needs to be completed in an integrated fashion [45][33]. Specific plan/legislative instruments include legal permissions, benchmarks, no-construction areas, green planning and no-traffic areas. These findings are in line with Hawxwell et al. [27], as these instruments are fundamental in supporting NBS implementation, despite the author considering that governance adaptation is not always straightforward and governments can, in fact, act as barriers or enablers to NBS adoption [26].

Economic instruments were the second most mentioned type of instrument in the literature (almost 61%). In fact, research on cost-effectiveness of NBS is acknowledged to help promote long term funding and implementation [20]. Furthermore, the valuation of natural settings (such as NBS) might serve as a justification for different investments, especially if all benefits are considered. Specific economic instruments in the assessed studies include taxes, subsidies, economic incentives and cost internalization. The environment represents a market failure by not including tradable market-values, thus generating externalities that are not considered [16][46][47].

Information instruments were the least mentioned (appearing in almost 57% of the reviewed papers), despite occurring in almost the same percentage as the economic instruments. This might indicate that there is a need to identify opportunities and increase citizen engagement within policy-making, which may justify the shortage of this type of instrument and could also be the reason as to why there are so few real-world adoption cases [48][49]. In fact, all authors that mention stakeholder engagement state that this is a crucial step in NBS adoption and demonstrate positive outcomes when it is undertaken, with different approaches available [19][48]. According to the same authors, citizens welcome better adaptation measures and NBS adoption when citizen engagement is fulfilled. In general, discussion regarding information instruments can be considered a gap in literature [49]. Specific information instruments include green city concepts, citizen engagement, education, green marketing and certification. These were the least mentioned instruments, despite their recognized importance as stated by Ríos-White et al. [48].

The lack of specific examples of NBS policy instruments may be due to the fact that, despite NBS being considered more effective and less expensive than grey solutions, their benefits and co-benefits are still diffuse, green valuation is hard to assess, returns are hard to predict, and several barriers still exist [26]. Policy instruments can act as enablers or barriers to NBS adoption, depending on how they are formulated and embedded in governance, which increases the pressure on their design and implementation [27]. Policy instruments to encourage NBS adoption can target land, building, water, air, environmental protection and conservation and social aspects [27], which is in line with this study’s findings. Despite most of these categories being present in the list of specific policy instruments, they are scattered and not organized, entailing the need for their effective integration in literature.

Overall, there is a need to better integrate policy instruments in NBS adoption, in order to achieve a policy mix that promotes transparency, citizen engagement and environmental justice, as well considering the existent constraints [15]. While NBS standards and guidelines are scarce and municipalities are struggling to introduce them in real-world contexts, demonstration projects and scientific contributions should encourage their integration [1][5][9].

In conclusion, NBS policy instruments are addressed in the literature mostly from a general perspective, hence the evidence base on the efficiency of specific NBS policy instruments is rather thin. Indeed, there is a need for different policy instrument that encourage the adoption of NBS in order to increase cities’ resilience to climate change—one of the biggest challenges in current urban policy and planning. Besides efficacy evidences, it is important to have an integrated and informed approach to policy instruments that would encourage NBS adoption.

More
© Text is available under the terms and conditions of the Creative Commons Attribution (CC BY) license (http://creativecommons.org/licenses/by/4.0/)
Upload a video for this entry
Information
Subjects: Engineering, Civil
Contributor MDPI registered users' name will be linked to their SciProfiles pages. To register with us, please refer to https://encyclopedia.pub/register :
Rita Mendonça
View Times: 89
Revisions: 2 times (View History)
Update Time: 31 Aug 2021
Table of Contents
1000/1000
Hot Most Recent