Submitted Successfully!
Thank you for your contribution! You can also upload a video entry related to this topic through the link below:
https://encyclopedia.pub/user/video_add?id=13626
Check Note
2000/2000
Alpha-Lipoic Acid
Edit
Upload a video
This entry is adapted from 10.3390/antiox10081294

Alpha-lipoic acid (LA) is a powerful endogenous and exogenous antioxidant. It is a disulfide compound soluble in both water and oil.

LA is a powerful endogenous and exogenous antioxidant. It is a disulfide compound soluble in both water and oil. The reduced form of LA, dihydrolipoic acid, represents the active metabolite (Figure 1). 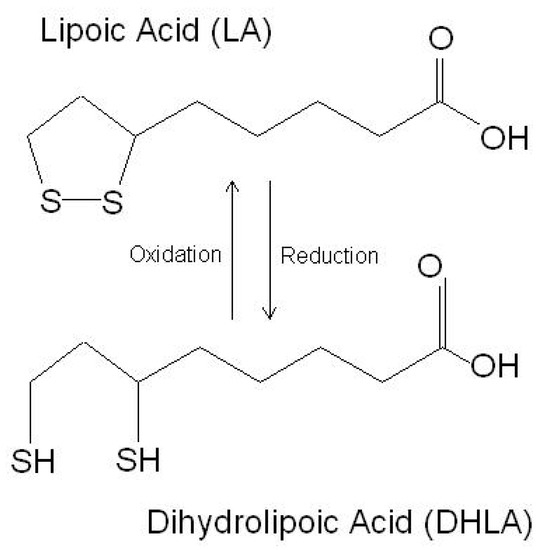 Figure 1. The chemical structure of lipoic acid and its active metabolite dihydrolipoic acid (https://www.robertbarrington.net/alpha-lipoic-acid-antioxidant/; posted on 3 January 2014 by Robert Barrington (accessed on 5 February 2021)).
In the cell, LA increases the utilization of glucose in the mitochondria via supplying acetyl-CoA for the production of acetylcholine [1]. LA induces the activity of the enzymes responsible for the synthesis of GSH and other antioxidant enzymes and is a cofactor of several mitochondrial enzymes [2]. Hence, LA regulates several processes, such as nucleic acid synthesis and energy production, via the citric acid cycle [2].
LA is present in foods and supplements and possesses pleiotropic biological activities. As a free radical scavenger, LA increases the level of reduced GSH. Moreover, it regenerates vitamins C and E as part of the antioxidant defense system.
LA stimulates insulin production and improves glucose utilization, thus ameliorating the oxidative damage caused by hyperglycemia [3]. In addition, it reduces the insulin resistance and improves the insulin sensitivity and blood sugar control [4]. In patients with type 1 diabetes mellitus, LA leads to the downregulation of nuclear factor-kB in monocytes [5].
Additionally, LA has been shown to improve the symptoms of diabetic neuropathy, to reduce the risk of diabetic retinopathy [6][7][8], and to ameliorate diabetes-associated autonomic neuropathy [9].
Furthermore, LA improves endothelial dysfunction [10] and decreases the risks of heart attack and stroke [11].
LA can cross the blood–brain barrier (BBB) [1][12] and may alleviate the neuroinflammatory damage, preventing neuronal death, in models of Alzheimer’s disease and Parkinson’s disease [13][14][15][16][17]. Additionally, it significantly attenuates the inflammatory response in microglial cells, downregulating the production of proinflammatory cytokines, such as tumor necrosis factor-α (TNF-α) and IL-6, and other cytotoxic molecules, such as nitric oxide and ROS [18].
Maldonado-Rojas and colleagues (2011) performed an in silico screening of the molecular targets for LA, and, among several targets, leukotriene A4 hydrolase, voltage-gated potassium channel, alpha hydroxysteroid dehydrogenase, and epoxide hydrolase were found to be the most likely bound by LA. As these genes are involved in the pathogenesis of a number of diseases, this finding supports the potential use of LA in the treatment of cancer, diabetes, and neurological and cardiovascular disorders [19].
The proposed mechanisms of action for LA are summarized in Table 1.
Table 1. Proposed mechanisms of action of LA.

2. Effects of LA in Viral Infection

Influenza viruses are RNA viruses of the Orthomyxoviridae family. Seasonal epidemics are associated with 3–5 million cases of severe illness each year and from 290- to 650-thousand deaths worldwide (https://www.who.int/news-room/fact-sheets/detail/influenza-(seasonal); accessed on 3 August 2021). Although safe and effective vaccines are available, their specificity is limited because of the diversity of the circulating influenza strains and the ability of the virus to acquire mutations. The treatment options for influenza infections are limited to inhibitors of neuraminidase and blockers of the M2 proton channel. In patients infected with IV, marked increases of oxidation byproducts are found, including 8-hydroxydeoxyguanosine, malondialdehyde, F2-isoprostane, 7-ketocholesterol, and 7β-hydroxycholesterol (reviewed in reference [51]). Additionally, elevated levels of sterol oxidation products are observed up to three months after IV clearance (reviewed in reference [51]). Finally, increased levels of ROS, as well as of nitric oxide synthase 2 (iNOS) and nitrotyrosine, are found in the lung tissues of patients that died from an IV infection (reviewed in reference [51]). Several reports have shown that NAC, ascorbic acid, and vitamin E have positive effects on IV infections by inhibiting viral replication and inflammation both in the cells and in the mice (reviewed in reference [51]). In an in vitro study, LA inhibited IV replication in MDCK cells and reduced the nuclear translocation of NF-κB. Additionally, the caspase-3 activity was remarkably inhibited and type I interferons (IFNs) were upregulated upon LA treatment [52]. Overall, the available data indicated that LA might be a potential anti-influenza agent, deserving further investigation.

2.2. Effects of LA in Herpes Infections

Herpes virus infection is widely spread, as estimates show that 80% of people worldwide are carriers of at least one strain. Nine herpesvirus types are known to primarily infect humans: herpes simplex viruses 1 and 2 (HSV-1 and HSV-2), varicella zoster virus, Epstein–Barr virus, human cytomegalovirus human herpesvirus 6A and 6B (HHV-6A and HHV-6B), human herpesvirus 7 (HHV-7), and Kaposi’s sarcoma-associated herpesvirus (KSHV) [53]
LA has been recognized for its potential to control herpes virus infections in a patented invention—a formulation for external use containing different naturally occurring substances, together with LA. The expected beneficial effect is to narrow the period of inflammation, allowing the affected tissues to be restored (US patent application No.: US 2011/0229584A1).
The neuroprotective properties of LA could potentially find their role in post-herpetic neuralgia, following shingles or Herpes zoster infection [12][17]. The chronic damage caused by the virus results in so-called post-herpetic neuralgia, could potentially be alleviated thanks to the neuroprotective properties of LA, that have been demonstrated in diabetic polyneuropathy—another condition related to peripheral nerve damage. In addition, by acting on the endothelial cells, LA improves the endoneural blood flow and favors the transport of nutrients to the compression site responsible for neuronal damage [10].

2.3. Effects of LA in Viral Hepatitis

Smallpox was declared eradicated in 1980; however, in recent years, due to the potential use of this virus as a biological weapon, concerns have been raised for an improved method for the prevention and treatment of this disease. The currently available vaccines, which have not been updated since the eradication of smallpox, could lead to severe adverse reactions, and interest in drugs with good safety profiles is emerging. In addition to the prevention and treatment of vaccinia-related infections and variola infections, worth mentioning is the so-called monkey pox virus, which is endemic for Africa, although cases are also sporadically reported in the United States.
An in vitro study of LA and ethacrynic acid has shown that both substances have inhibitory effect towards virus growth, while they are relatively nontoxic to fibroblasts and epithelial cells [54]. The effect of LA and ethacrynic acid was dose-dependent and seemed to be related to the inhibition of the expression of VACV late genes, resulting in decreased levels of infectious virus progeny. The two molecules, however, did not seem to affect either VACV entry into the cell or viral DNA synthesis [54].

2.4. Effects of LA in HIV Infection

Chronic viral hepatitis is the leading cause of liver fibrosis and cirrhosis. Replication of the virus in liver cells results in decreased levels of glutathione in hepatocytes. The viral load in hepatitis C is directly related to the glutathione levels [55]. Eventually, the oxidative stress leads to necrotic inflammation and the necrosis of liver cells. Increased lipid peroxidation leads to hepatic cytotoxicity, causing immune-mediated inflammation and fibrosis [56][57][58]. Supportive therapeutic effects of LA have been demonstrated in the clinical setting in patients with a Hepatitis C infection [59][60]. The LA antioxidant properties have been recognized as potential therapeutic effects based on its ability to exert anti-inflammatory, antifibrotic, and anti-TNF-α effects that produce restoration of the damaged areas of the liver, as well as its function, as demonstrated in HCV patients [59][60]. According to a clinical study with a small number of patients conducted by Berkson in 1999, therapy with the antioxidant LA, the hepatoprotector silymarin, and the element selenium, completely restores the liver function of patients, and the proposed combination allows avoiding liver transplantation [59]. The beneficial effect of the application of various antioxidants, including LA, was later confirmed in a clinical trial enrolling 50 patients with chronic hepatitis C infection [60]. Among them, 48% responded with improvement in at least one of the observed liver parameters, and a decrease in the viral load was observed in 25% of the patients.

A major pathogenetic factor in HIV infection is the induced oxidative stress, which causes apoptosis and a decrease in the number of CD4 + T cells, which may eventually lead to marked immunosuppression [61][62]. Increased oxidative reactions [61] and higher concentrations of hydrogen peroxide [63] and MDA [64], as well as suppression of the antioxidant protection response, with decreased activity of the antioxidant enzymes SOD, GPx, CAT, and thioredoxin, have been found in the plasma, lung mucosa, erythrocytes, and lymphocytes from patients with HIV infection [62][63][65].
The potential antiviral effects of LA were first proposed by Baur and colleagues in 1991 [66]. They observed that the addition of LA to the T-cell lines Jurkat, SupT1, and Molt-4 incubated with a wild-type HIV-1 isolate was associated with a dose-dependent inhibition of HIV-1-replication, a reduced cytopathic effect, and the inhibition of reverse transcriptase activity and plaque formation [66]. Moreover, LA synergized with zidovudine in inhibiting viral replication by affecting the reverse transcriptase enzyme [66].
In HIV patients, the administration of LA was associated with positive effects characterized by the stable restoration of the total blood GSH levels and lymphocyte function in comparison to the placebo group, where a progressive decline was observed [67].
In another clinical study, upon the oral administration of LA to 11 AIDS patients, an increase in the blood concentrations of ascorbic acid and total GSH and a decrease in the levels of lipid peroxidation, accompanied by a significant increase in the CD4/CD8 ratio and the number of CD4 + T cells in the plasma, was observed [68].