Submitted Successfully!
Thank you for your contribution! You can also upload a video entry related to this topic through the link below:
https://encyclopedia.pub/user/video_add?id=13595
Check Note
2000/2000
Mitochondrial Dysfunction in FECD
Edit
This entry is adapted from 10.3390/cells10081888

The corneal endothelial is the innermost layer of the cornea and plays an important role in maintaining water balance and clarity of the cornea. Fuchs endothelial corneal dystrophy (FECD) is the most common corneal endothelial dystrophy. It is a bilateral, genetically heterogeneous degenerative disease of CEnCs occurring in 4% of the U.S. population over 40 years of age, with a higher incidence in women [1][2][3][4]. It is characterized by the progressive decline of the CEnCs and the formation of extracellular matrix excrescences [5][6][7] in Descemet’s membrane (DM), called guttae, leading to corneal edema and loss of vision. Currently, the only treatment for FECD is corneal transplantation, which accounts for approximately 32,000 of the endothelial keratoplasties performed in the U.S. annually. It carries substantial economic and social burdens. Understanding the disease pathogenesis is essential for developing pharmacotherapeutic interventions to halt the disease. In FECD, CEnCs exhibits stress-induced senescence [8], oxidant-antioxidant imbalance [9], mitochondrial DNA damage [10] and dysfunction [11], sustained unfolded protein response (UPR) [12][13], and endoplasmic reticulum (ER) stress [14]. Among these factors, mitochondrial stress [15][16][17][18] plays an important role in FECD pathogenesis. Maintaining functional mitochondria is the key to the ion pump function in CEnCs. Excessive damage to the mitochondria leads to its selective degradation called auto(mito)phagy [15][18].

Due to many ion pumps and very active endothelial cell metabolism, mitochondrial density is very high in CEnCs, second only to retinal photoreceptors [19]. Mitochondria, the powerhouse of the cells, regulate many physiological processes in CEnCs and play a pivotal role in their survival [20][21][22].

As Fuchs is prevalent in females [2][3], Liu et al. analyzed mtDNA damage in the mouse model of ultraviolet A (UVA)-induced FECD for both sexes and found that mtDNA damage was significantly more in the mouse corneal endothelial cells (MCEnCs) at week 4 and 8 post-UVA in females compared to males, suggesting the female susceptibility to FECD [10]. However, mtDNA exhibited a similar extent of damage in both male and female mice at day 1 post-UVA, and it recovered at week 2 post-UVA [10].

Mitophagy is a specialized and evolutionarily conserved autophagy involving degradation of damaged mitochondria, which accumulates following stress, thus regulating mitochondrial turnover and quality control and health. Mitochondria quality control is a complex cellular protective mechanism and occurs through the coordination of many cellular processes such as proteostasis, biogenesis, and dynamics including mitophagy to maintain cell homeostasis. Imbalance of mitochondrial quality control occurs in many diseases in response to mtDNA damage upon various intracellular or extracellular stress. Under extreme stress, when there is minimum possibility of maintaining cell homeostasis through mitochondria quality control, cells activate their apoptotic pathways to control cell fate.

6. Mechanisms of Mitophagy in FECD 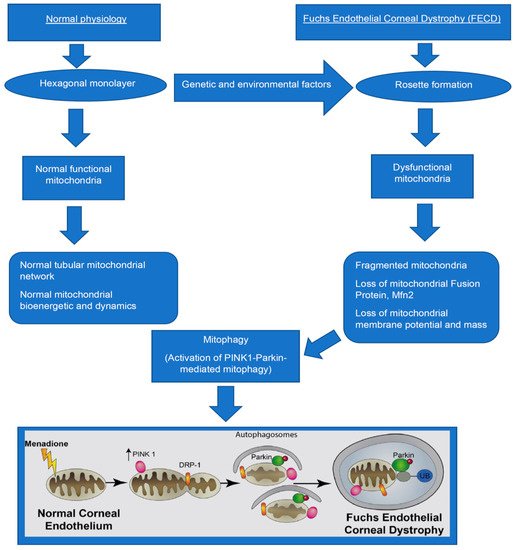 Figure 1. Mitophagy in Fuchs endothelial corneal dystrophy. Schematic diagram demonstrating the formation of dysfunctional mitochondria that leads to mitophagy in Fuchs. In FECD, various genetic and environmental factors lead to the conversion of hexagonal CEnCs into an irregular shape, thereby resulting in rosette formation. Subsequently, there is mitochondria DNA damage, fragmentation, loss of mitochondria fusion protein (Mfn2), mass and membrane potential, which lead to activation of PINK1-Parkin mediated mitophagy, thereby resulting in clearance of abnormal mitochondria.
In general, mitophagy could be driven by the loss of MMP, electron transport chain proteins, and mitochondrial dysfunction, as seen in FECD as described in the previous section. This could lead to a significant decline in mitochondrial mass as seen in the FECD cell line compared with the control cell line (HCECi) [15] at the baseline. Moreover, CCCP could lead to a significant decline in mitochondrial mass in the control cell line (HCECi) [15]. Loss of mitochondria mass could directly contribute to mitophagy in FECD. In conclusion, autophagy in mitochondria or mitophagy drives the loss of Mfn2 in FECD [15].
Another molecular mechanism for mitophagy in FECD is PINK1(PTEN-induced putative kinase 1)-Parkin pathway activation, as described by our group [18]. In the PINK1-Parkin mediated mitophagy, there was upregulation of PINK1 in the outer mitochondrial membrane, which recruits the cytosolic E3 ubiquitin ligase Parkin and ubiquitin by phosphorylating Serine65 in both proteins. Parkin translocate to the mitochondria, and further ubiquitinates its substrates to proteasomal degradation. The ubiquitination also initiates the recruitment of phagosomes to mitochondria, removing them through the autophagosomal pathway. Miyai et al. showed that human FECD samples demonstrated upregulation of PINK1, phosphor-Parkin with a decrease in total Parkin [18]. A similar observation was seen at least for phosphor-Parkin and Parkin in normal cell lines after the MN induced mitochondrial fragmentation in vitro [18]. FECD cell lines also demonstrated a significant decrease in the total Parkin with significant upregulation of the phosphor-Parkin (Ser65) compared to the control cell line when treated with CCCP. To investigate the ubiquitination and proteasomal degradation of mitochondrial following Parkin recruitment, a proteasomal inhibitor (Epoxomicin) was used and demonstrated increased fold in the rescue of total Parkin after treatment of CCCP in the Fuchs cell line compared to the untreated control cell line. This suggests a possible abnormal stimulation of proteasome-mediated degradation in FECD.

7. Role of Mitophagy in FECD

The activation of mitophagy being detrimental or useful remains unclear in FECD. PINK1-Parkin mediated mitophagy, as described by our group, suggests that excessive mitophagy might destroy many normal mitochondrial, disturbing mitochondrial bioenergetics, and contributing to the cascade of destructive events in the pathogenesis of FECD. Therefore, therapeutics targeting mitophagy might not be beneficial in the late stage of FECD. However, it might be advantageous in the earlier stages of FECD as CEnCs might alleviate some intracellular mitochondrial stress by removing damaged mitochondria via mitophagy.

More
© Text is available under the terms and conditions of the Creative Commons Attribution (CC BY) license (http://creativecommons.org/licenses/by/4.0/)
Upload a video for this entry
Information
Subjects: Cell Biology
Contributor MDPI registered users' name will be linked to their SciProfiles pages. To register with us, please refer to https://encyclopedia.pub/register :
Varun Kumar
View Times: 31
Revisions: 2 times (View History)
Update Time: 27 Aug 2021
Table of Contents
1000/1000
Hot Most Recent